The Gardner-Pingree House is located at 128 Essex Street in Salem, Massachusetts.

The Gardner-Pingree House is now owned by the Peabody Essex Museum. It was built in 1804-1805 by John Gardner, Jr., who was a local merchant. It was later owned by Captain Joseph White. He lived in the house with his family until they were brutally murdered in the house in April 1830. In 1834, David Pingree owned the house. He and his heirs lived there until 1933.

On the night of April 6th, 1830, Captain White was brutally murdered after Crowninshield entered the house through a window that had been left open by Joseph earlier in the day, went to the bedroom where Captain White was sleeping, and fractured the Captain’s skull with a club as well as stabbing him thirteen times with a long dagger.

The murder shocked the town of Salem and even inspired Nathaniel Hawthorne to write about it in his short story, Mr. Higginbotham’s Catastrophe.

The court case that followed is actually a rather interesting one as the Knapps were prosecuted by the great Daniel Webster, one of the most successful lawyers of the era, who was primarily a defense lawyer but also known to serve as a prosecutor from time to time. Webster’s courtroom skills and persuasive oration eventually set legal precedent and the two brothers were found guilty and hanged for their role in the crime. Their hired-man Crowninshield had already committed suicide early on when he realized he had no hope of getting away with the murder.

Today many believe the house is haunted by the White family. People claim to see ghostly faces looking out of the second floor windows, and many hear ghostly footsteps while touring the house. Some even claim that the grisly murder is reenacted on the anniversary of their death. 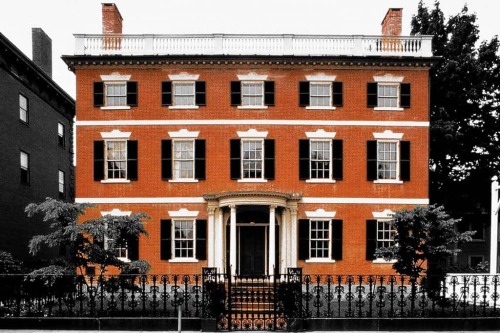 Witch Dungeon Museum tour takes lace in an old church. The tour taking guests through a dark maze of exhibits depicting the sizes of dungeons the innocent witches were kept in until their death or the end of the witch hysteria. The Witch Dungeon Museum also creates a visual and feeling for visitors as you walk through their fully created streets in Salem Village 1692.

Some witness a shadow figure moving in the basement while walking through the old Salem Village depiction. A ghost of a monk who once lived in or possibly practiced his religious profession on the historical church grounds.

People have felt extreme cold breaths of air and the feather-light touch of ghostly fingers on their arms or back. Others have heard a deep male voice humming when there are no other men in the building at that time. 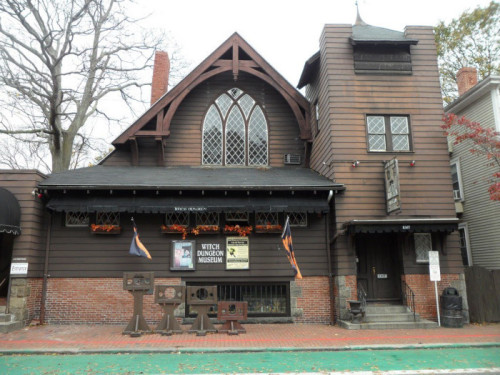 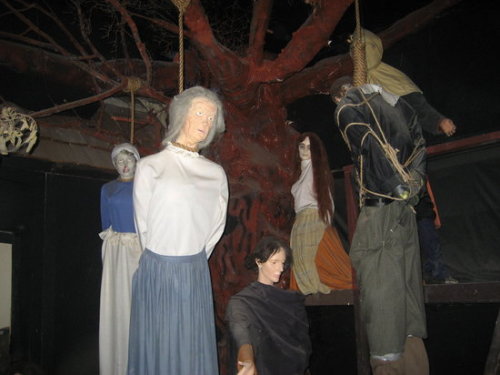 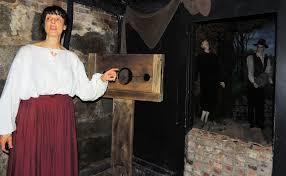 Well Nathanial Hawthorne was a 19th century author of novels and short stories.

He was terminated as a customer surveyor because he constantly saw ghosts walking the halls of the Custom House. This is also where he wrote the famous Scarlett Letter.

The Scarlett Letter is about Hester Prynne who conceives a daughter thru an affair and struggles to create a new life of repentance and dignity. This lady is found guilty of adultery and is required to wear a Scarlett “A” on her dress to shame her and she must stand on the scaffold for 3 hours to be exposed to public humiliation.

Going back to the Custom House, employee experiences are hearing ghosts of ship captains discussing treasured items and desired trades aboard their ships, they hear footsteps and experience flickering lights. The Custom House Tour Guides will not even mention anything ghostly on the tours.

Now across the street at the Derby Wharf where the Friendship is located, this location was used that in the Revolutionary War as a base. Many experiences there are people seeing pirates climbing out of the water onto the wharf walking around as if to be searching for something, They hear sounds of footsteps coming up behind them people feel cold air in 80 deg temperatures. Some have seen pirates walking around. One woman was touched by cold fingers only to turn around to see an 1800’s fisherman’s attire vanish into thin air. 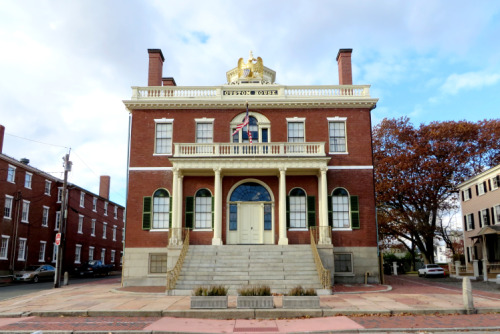 One night he fell through a loose spot in the ceiling and was found dead sprawled on the seats below by a professor the following day. The part of the auditorium where the boy fell has been sealed off long ago and is currently used for storage, but Tommy still haunts the area.

People experience odd noises, items being moved and relocated and unexplained equipment problems. When technicians are working high up on ladders they are adamant that they feel Tommy putting pressure on their backs protectively to prevent anyone else from falling to their demise like Tommy did decades ago.

Named after famed author and Salem resident Nathaniel Hawthorne, the Hawthorne Hotel opened to great fanfare in 1925. More than one million visitors have passed through its doors, including the cast of Bewitched, former presidents George Bush and Bill Clinton, actress Bette Davis, and many others.

However, legend has it some guests never checked out. Eerie events at the Hawthorne include unexplained banging sounds, moving furniture, flickering lights, and sudden cold spots. Guests and staff say most paranormal activity takes place in rooms 325 and 612. In 325, the sounds of a crying baby disturb guests, though no baby is ever around .

Touches from unseen hands and faucets that switch off and on are also common complaints. On the sixth floor, a woman in white reportedly wanders the hallway, lingering outside the door of room 612, before slowly fading away.

One couple’s strange experience in the infamous room. It seems the pair was settling in for the night when a loud banging sound startled them out of bed. They searched the room, and the hallway outside, but found nothing that could account for the banging.

On the top floor, belonging to Salem Marine Society, employees have claimed to see the ship’s helm turning. Many attribute this eerie phenomena to the sailors of long ago who once sailed the waters of Salem and traveled all over the world.

Others up on top floor have left and returned to find items usually locked up strewn all over the room the next morning. Antique maps, charts and other objects are most frequently the objects that are misplaced.

Phantom hands tugging on the sheets in the middle of the night, and even a few different occurrences when guests claim to have felt those phantom hands actually touching their hair, their hands, as they slept. 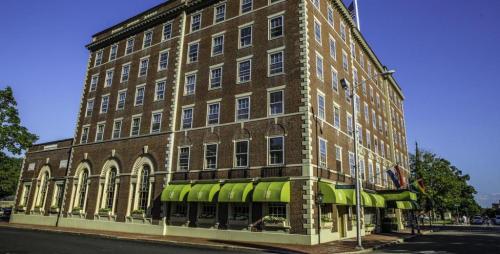 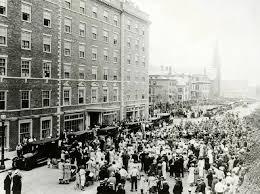 For over two hundred years Hamilton Hall on Salem’s scenic Chestnut Street has served as a gathering place for the community. The building dates to 1805, when Samuel McIntire was commissioned to design a meeting place for Salem’s Federalist Party. It was named to honor Federalist Party leader Alexander Hamilton.

As the 19th century progressed, the Hall became an ideal place for dance studios due to Samuel McIntire’s signature spring floors. Lorenzo Papanti, a master dance instructor from Boston regularly held classes at Hamilton Hall, attended by the children of Salem’s elite. The dance classes later gave way to grand debutante presentations and balls. In the 20th century, local instructors Henry O. Upton and Harriet James continued the tradition of providing lessons at the Hall, which lasted into the 1970s.

One of the Hall’s oldest traditions and its largest fundraiser is the annual Christmas Week Dance, which can be traced back to the 1880s. Money is also raised for the Hall through a lecture series sponsored by the Ladies Committee.

The series has been in place for seventy years and features a variety of speakers, discussing domestic and foreign affairs.

In 1970, Hamilton Hall was designated as a National Historic Landmark and today is regularly rented for banquets, weddings and, as its original intention, a meeting place.

There have been claims of seeing an apparition of a male on the stairwell, then just disappear. Visitors have claimed to have felt unusual cold spots throughout the house. 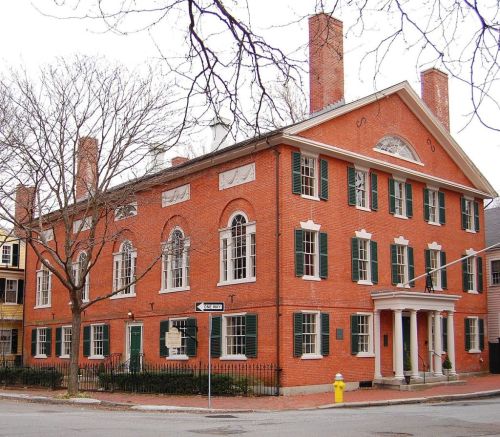 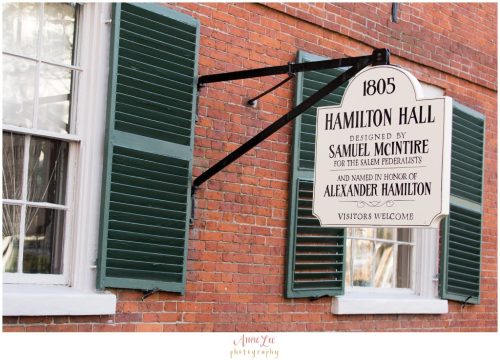 The Salem Inn was the 1834 home of Captain Nathaniel West, a successful sea captain and merchant. It later became the home of Civil War General Williams Cogswell. General Cogswell also served as mayor of Salem. The current owners bought the property over 35 years ago and converted it into the Salem Inn.

Since then, the owners have expanded the Salem Inn into two other buildings, the Peabody House, built in 1874 and the Curwen House. Curwen House was built in 1854 by James and Samuel Curwen.

It is said that there are three spirits in the Inn. The owners don’t believe any spirits are haunting the Inn but staff and guests have had several experiences, just read the journals in the rooms.

The first is a woman who is referred to as Elizabeth, perhaps after Nathaniel West’s wife, who divorced her husband for his extramarital affairs. Others refer to the spirit as Katherine.

There is also a little boy who is heard running up and down the staircase and through the halls. Staff have heard a child giggling when there are no children in the Inn.

The third ghost is that of a cat, the Inn has no cats, but guests report seeing one dart down the hallway or into a room.

Some of the strange occurrences the guests and staff have experience include that classic ghostly behavior of thievery. Countless times, members of the staff have complained of coal logs vanishing from the fireplaces, and even freshly set up candles disappearing from the surface on which they were placed upon.

One room that has achieved legendary status at the inn is Room 17. It is within this room that guests and staff alike have claimed to have experienced the most activity. Reports of items mysteriously moving from one location to another and the sight of unexplainable shadows are not uncommon. The ghost of Room 17, is believed to be a woman who was killed by her husband. This betrayal by her husband, has lead to her spirit’s ill treatment of any man who stays in the room. Usually when a man does spend the night in Room 17, she’ll become quite active in order to disrupt their sleep. She achieves this by causing loud noises in the closet, and stomping around the room. It’s been said, if you leave a tumbler of whiskey, or any alcohol for that matter, she just may leave you to a restful night of sleep.

The last of this spirit triangle, is believed to be the ghost of a child. The staff have said that they’ve heard the sound of a child giggling, at times when there were no kids saying at the inn. Some staff members have also heard light footsteps following them around the inn. Footsteps so faint they could have only been made by a child, but upon turning around expecting to see a kid in need of assistance, they are baffled by the discovery of nothing. 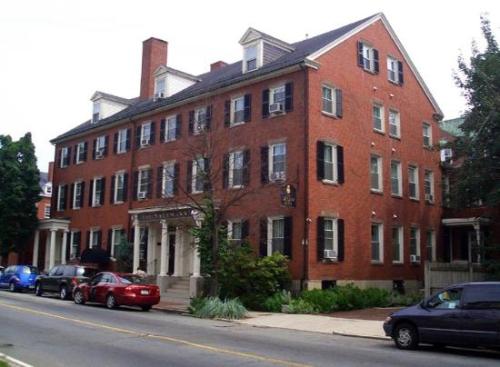 “Hamburgers. The cornerstone of any nutritious breakfast.” - Jules

For anon. Here’s a selfie from Salem! 👻

TAKEN AT THE BURYING POINT IN 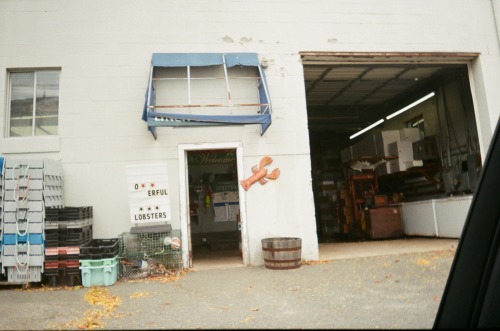 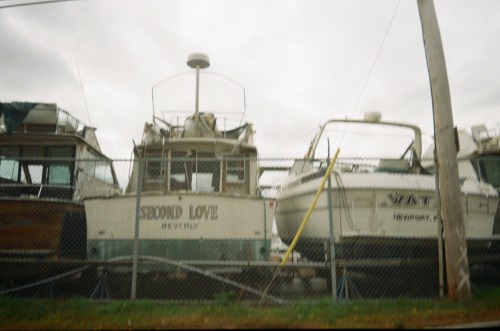 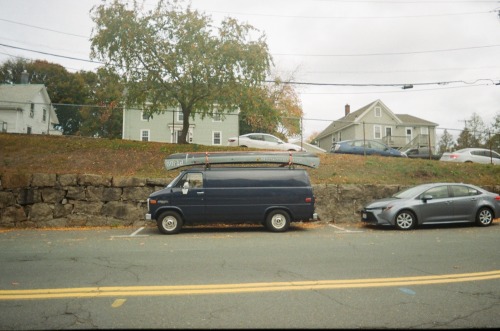