I never posted this salem on here-

Anyway here she is again!!

Salem: I am going to destroy you and all of Remnant.

Jaune, pulling out Ruby taped to an Uno Reverse card: No U

…and the Queen comes to set the stage herself

#that's what i call and entrance, #i got chills from that ending, #rwby vol 7, #rwby, #salem rwby
2 notes · See All
disregardcanonText

Summary: The story of Cinderella has been told a thousand times by a thousand different storytellers, but this version is a bit different than the rest. This is the story of how Cinder Fall gets her fiery justice and Salem ensnares her closest disciple.

(After being sat down in front of Salem, she begins to monologue. Meanwhile under his breath Oscar begins to snicker)

Oscar: nothing, nothing, … it’s just something that Oz told me.

Salem: what on earth could he have told you that would be hilarious right now?

Oscar: it’s just about you and Ozma relationship.

Oscar: well how do I put this … Ozma well he.

Salem: out with it, WHAT DID OZMA DO!

Oscar: well he … ah … he thought the gods were hotter than you.

Oscar: yeah, when he saw them he was really interested.

Oscar: one way to find out, say Jins name and ask her.

Salem: (Salem holds up the lamp and calls out Jin’s name) Did Ozma find the gods attractive!? (Jin appears) 

Jinn: No, … I have answered my question for this era! (Jin disappears)  

Oscar:  (laughing uncontrollably) YOU BELIEVED ME!!! 

  Notes from the author: so I know it’s not Trash Talk but I hope this works.    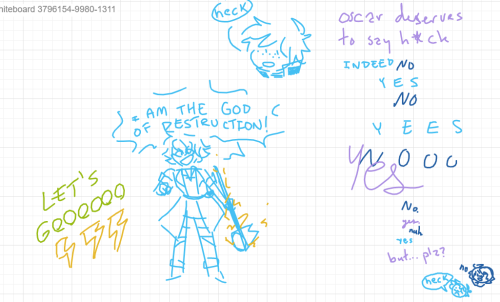 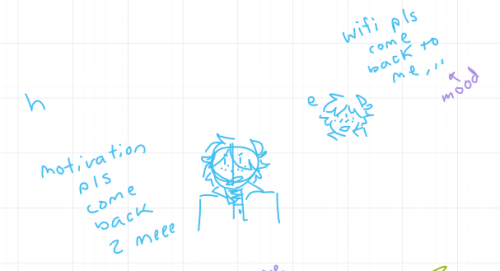 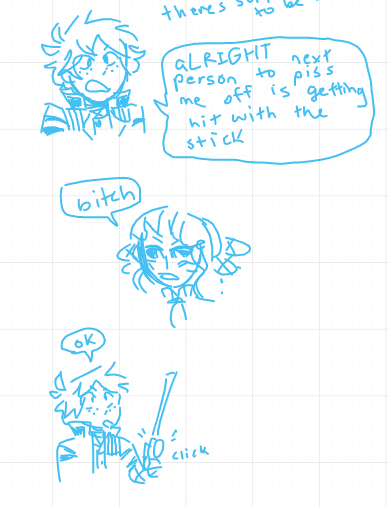 Shit about to go down.

Ruby: But it is me

Salem: No, it’s an expression-

Ruby: Your villain tricks won’t work on me

Salem: Just in case somebody starts feeling too important.

found this in my notebook and decided to flesh it out a little.

The Cycle of Ever After

A shiver runs up Oscar’s spine as Salem walks around behind him.  It takes all his willpower not to turn around and track her every movement.  He has a feeling she’s expecting that.  An adamant part of him strongly resists the idea of doing what it is she wants, or expects him, to do.

“Do you know why?”  Salem comes to a stop in front of Oscar.  She gazes coolly down at him.

He looks right back up to her, hoping his expression is defiant and not as anxious as he’s feeling.

Salem doesn’t scare Oscar.  He was surprised to realize that truth when the Grimm that captured him first brought him to her.  Looking at Salem doesn’t fill him with dread or fear he’s about to die.  He knows she won’t kill him.  At least not yet.

All Oscar feels when he looks upon Salem is sadness.  Remorse.  Regret.  That this is what she became.  That he loved her once.  That he—Ozma—heard of the tale of the Girl in the Tower and decided to save her from her fate.

Ozma as his own person doesn’t exist anymore.  Too many centuries of reincarnation and merging a little more with each new life has meant the person as he had been has all but disappeared.  Ozma’s memories remain, but it’s Oscar who can remember them now.  He’s his own person, Oscar finally has realized.  It’s each past life that merges into the current one.  Not the other way around.  It’s he who has the final recollection of Ozma’s life, his hopes, his aspirations.

Who gets to mourn them.  Mourn what could have been, yet what never was.

Somewhere inside of him Oscar knows Salem doesn’t understand this.  That, for all she tried to keep Ozma alive, he’s died a very gradual, very slow death anyway.  And until she recognizes it and finally lets Ozma’s memory go, the cycle they’re in will keep continuing on through time.  Never ending.

“He reincarnates younger because there’s less of a chance they’ll already have built a family,” Salem tells Oscar.  “Loved ones who will die before his eyes because of him.”

Replacements for her, he knows she’s not saying out loud.  In her twisted reality, the one she loved can’t love again or move on.  She hasn’t, and she’d prefer to warp both the world and herself into an unrecognizable nightmare before she admits to that.

Oscar looks at Salem and says nothing.  If she won’t choose to accept that her and Ozma’s story ended tragically (and partially by her own hand), he knows there’s probably nothing he can say to sway her mind.

Because he’s not Ozma.  He’s Oscar.

And, to her, he doesn’t actually exist.

AND LOOK WHO’S ON HER WAY

Lasting Embers: The main nine characters and Raven reach Salem’s castle and storm it, while friends they made around the world face off against elite grimm designed to wipe out the kingdoms. The only relic in their possession now is destruction. The team gets split up and end up having to fight grimm versions of old adversaries; including JNPR killing grimm Pyrrha, Ruby fighting Roman and actual Neo. Raven goes against Cinder and Tyrian with Qrow. Blake faces off against a fake Adam. Weiss and Yang end up with Emerald and Mercury; all while Oscar tries to survive Salem. Neo, Em, and Merc are eventually forced to escape. The other heroes kill their foe. Ruby reaches Oscar first to save his life. Silver eyes purge Salem of her connection with the grimm. The sword of destruction nearly obliterates her. Enraged, Salem unintentionally draws grimm to her is ripped apart and eaten by hundreds of them. Ruby turned the group into stone and finally, Salem is gone. The relics are put into vaults again along with some of the stone grimm and other places they can’t be disturbed.

Twin Snowflakes: This world ended up pretty different since the entire world learned about Salem. A small group of people didn’t show up to Salem’s territory. The world showed up, armies and huntsman from each kingdom/menagerie showed up to battle the mass horde of grimm and Salem’s followers. Our main characters lead troops and took down hundreds in an attempt to overwhelm their enemies, but it wasn’t going well. They just kept spawning and reaching Salem seemed near impossible. That’s when Ruby’s plan changed. She wasn’t trying to get to Salem. She wanted the relics. The battle was a game of keep away. The first side to get all the relics in one spot for their leader was gonna win. Humanity eventually managed to gather them all and Ozpin summoned the gods. The brothers saw all the fighting and were about to erase everything but Ruby stood against that verdict, preaching how every kingdom, humans, and faunus were able to put aside their differences to get rid of a problem that the gods causes in the first place. Then she went as far as to say everyone here would challenge anybody who’d threaten Remnant; even if it was the gods. The brothers took another look around. Through the desire to fight for the world they live in, humanity really did unite. War brought about trust. Am interesting outcome they never predicted. An outcome worthy of passing their test. The brothers commend Ruby and humanity. They showed their gratitude by restraining Salem and stripping her of her immortality. As they were about to deal the final blow, Oz forced his way in between them. After all she’s done, Oz didn’t want to see her go out like this. Being erased was a thing nobody should go through. The God of Light decided for Ruby to choose Salem’s punishment. Only one thought came to mind. Salem was sent to the afterlife. Ruby was sure her kids wanted a stern talk with their mother.

Rosebud: This universe sorta has a mix of offense and defense when it comes the previous two. The world knows if Salem but not all the details of gods or anything of the sort. The kingdom worked together in boosting defenses and providing aid while Ruby, her friends, and the extended group of friends like SSSN, Ilia, and others went to face Salem. People like Mercury and Emerald turned traitor and Cinder was betrayed by Salem in the final hours of battle for failing to stop Ruby; her maiden powers being taken out of her as a result of that failure. The attack on the castle was more subtle, planned. Thanks to her friends, Ruby was able to traverse it easily, trusting them to deal with any opposition while she aimed for the grimm queen herself. She encountered Cinder for a final confrontation. The woman was angry and desperate to reclaim the power she had lost by killing Ruby to get back into Salem’s good graces. Ruby made quick work of the Cinder and let her walk away with her life still intact. Cinder swallowed her pride and fled. Ruby went on to face Salem. The battle was rough and nonstop, but Ruby was able to cut Salem down and turn her stone. Salem’s immortality was now a true curse. Even if the stone shatters, it still comes back the way it was, stone. Making this Ruby the youngest and strongest Ruby to save the world in my AU’s.

Premonition:This is only au where I thought a little out of the box. Beating Salem was simply something no one was prepared to do at the time. Containment was the only solution. With the help of mostly Atlas and Haven, the team was able to seal Salem in a vault, temporarily giving the world a reprieve and for Ruby to properly train. Two years later, Ruby entered the vault with her friends and vaporized all of the grimm that was in Salem. With empire destroyed and any chance of her plans ruined, Salem now roams Remnant with Oz keeping an eye on her as she finally starts doing the punishment she was meant to do in the first place; reflect on her actions and make peace with how the world is. At least this time she has her ex husband to keep her company for as long as it takes for her to get the message.

I’m really in to this pizza though

#rwby, #rwby salem, #salem rwby, #and she would have won too if the gods didn't call time out
6 notes · See All
rwbybutincorrectText

Cinder: So I’ve been thinking, Salem-

Salem: Be careful. That could be dangerous, Cinder

my one contribution to the rwby fandom