Sam flops back on the bed and huffs as he catches his breath, “Dude… you gotta stop… makin’ it so fast…”

Bucky, beside him, also laying out, just laughs, “It could be worse.” He grins over at Sam, “You could’a picked Steve, and it would’a lasted for-e-ver.”

Sam shudders and reaches over to smack Bucky’s chest, “I hate’chu.”

Again, Bucky just laughs and rolls off the bed, pulling on sweatpants, “Hey, at least I gotcha int’a the bed. Would’a been uncomfortable on the couch.”

Sam laughs, but is cut off as Bucky leaning over, giving him one last, searing kiss.

They’ve been going at it for several months, trading rooms and leaving before they’re caught. All it is is making each other feel good. Until Sam notices tension in Bucky’s shoulders and back. They don’t stop, but he feels bad each time he doesn’t mention it.

Laying side by side one afternoon, he finally hazards, “Do you… well… I mean… I could give you a massage?”

Bucky hasn’t said anything about it, but after looking Sam in the eye for several moments, he blushes and slowly rolls onto his front.

Summary: A story revolving around a group of teenage friends, their mishaps, their relationships and their coming of age.

Watch as they navigate through the highs & lows of high school relationships and learn to grow up as most of them are approaching the end of their Senior year.

#credit for Tony's medical system delivery speech to the book: Iron Man: The Gauntlet, #i am not smart & needed some help with that, #idk if it makes sense in the context but whatever, #i needed him to talk projects, #sorry if this is dumb, #stony, #sambucky, #thorbruce, #valjane, #Steve Rogers, #sam wilson, #Bucky Barnes, #Thor Odinson, #bruce banner, #wanda maximoff, #Loki Laufeyson, #valkyrie, #jane foster, #The Avengers, #avengers endgame, #my fanfiction, #tony stark
0 notes · See All
mcqrawPhoto 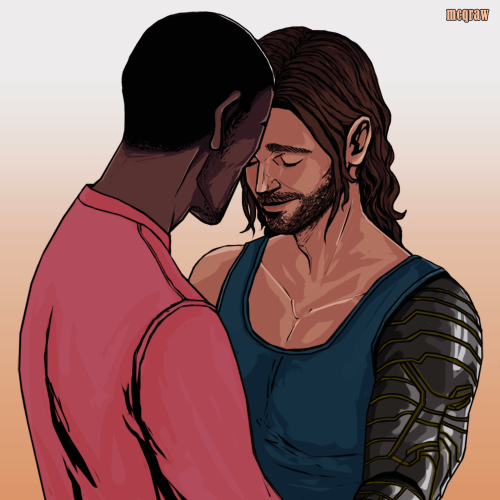 B2 - Cooking Together (art)

G3 - Comfort From A Nightmare (fic) 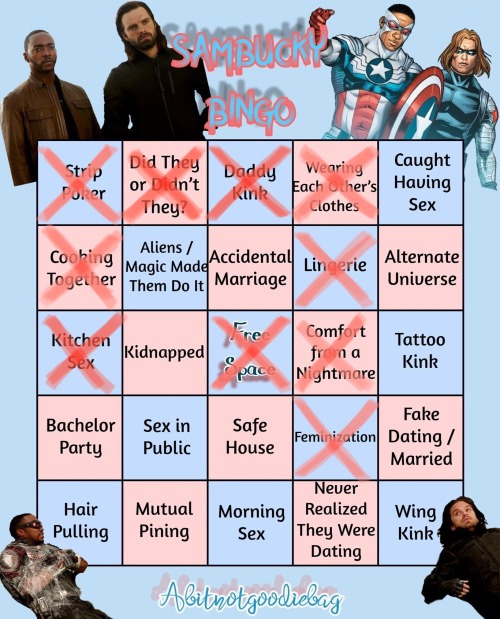 Bucky felt like trembling, and maybe he did. He felt his heart beating hard and fast that it should hurt. His eyes blown wide and his touches were careful. He knew Sam noticed it because he chuckled and stepped a little bit closer. His hand was placed on top of his metal arm which was still hovering around Sam’s torso, almost afraid.

“When did you come out of the hospital?” Bucky asked. “I— I could have pick you up. How did you get here? You didn’t injure yourself again on the way here, right?”

“Bucky,” Sam interrupted his rumbling with a smile on his face. “I’m fine. Just go out this morning. Think I could surprise you.” His smile turned into a grin. “I just did, huh?”

Seeing him well now, standing in front of Bucky made him wanted to puke rainbow all around just to show how happy and relieved he was right now.

He was interrupted again with Sam laughs, this time his hands opened up as well, and Bucky didn’t waste the time to close the distance between them, wrapping Sam in his arms. He could feel Sam nuzzled his head to his shoulder. He could feel Sam breathing, his heart beating, his skins warm, and alive.

Bucky felt like he had never been happier before.

summary: bucky lets sam cut his hair. he thinks it might shut sam up for once. (it doesn’t).

pairings: platonic! sambucky (unless u wanna read into things…i won’t be mad ab it)

a/n: this is my (short) entry for @rogvewitch’s 1K challenge! my prompt was “It’s really human of you to listen to all my bullshit” from Sixteen Candles. i hope i did it justice! i intended to make it longer but i like it where it is so i hope a drabble is alright. also, the bit about steve cutting bucky’s hair during the war is an idea from a fic i read a long time ago and can’t find for the life of me but it rlly stuck w me.

“SO YOU’LL PUT THIRTY MINUTES into shaving with a straight razor passed down to you by George Washington, but you can’t be bothered with a damn haircut?”

did i ghostwrite this

(Sorry that it looks terrible. But I saw the base photo I couldn’t help but draw the cap quartet)

based off of this photo:

Me, watching the chaotic half of my OTP on their way to make the gravest mistake of their life which will result in jeopardising their relationship with the dumbass half of the OTP

The Winter Soldier had fidgeted with his hands and sit down, looking defeated, Marie noticed. Not too long ago, the Captain America himself had just made a way in to the hospital himself and she had been surprised. It wasn’t like a new staff like her could see an avenger so close everyday. The captain had asked her where his friend—who Marie suspected was another avenger—in who was currently under a surgery  Just a few minutes later, the Winter Soldier turned up too, asking the same thing, now sitting in front of the room, waiting for something.

Marie couldn’t tear her eyes away from the brunette. The Winter Soldier had just currently come back as an avenger and a partner to the new Captain America. He … didn’t have the most reassuring reputation if Marie had to say something about it. The man always had an intimidating look on his face every time he was on the media, but now, the soldier just looked like he wanted to shrink himself in that seat.

Captain America came out of the room soon enough before the soldier could possibly tear the door down with his gaze alone. He spoke to him something that Marie couldn’t hear, put his hand on his shoulder, and the dam broke.

Marie wasn’t kidding when she said that she nearly dropped the glass on her hand. How could you blame her? The soldier was now hugging his partner tightly, the latter seemed didn’t mind because his hands were around his torso just in a second. He had his face tucked on the captain’s neck and his hand were gripping too tightly on the uniform.

The moment felt intimate enough that Marie found herself looking away, hoping that it would give them enough privacy in the public place. She didn’t want to be caught staring at the two avengers, of course. What she didn’t expect was the smile blooming on her face.

Perhaps the Winter Soldier got a heart on him as well.

“Not my grilled schrimp”, Sam mumbles, voice laced with sleep.

“Idiot”, he says fondly, “Stealin’ all my pillows. The audacity.”

Sam’s brows would pucker but he still keeps babbling in between snores. Bucky tries to tug at the covers in vain. There’s a last ace up his sleeve though, a quite cruel one. He muses over it a minute before intertwining his legs with Sam’s, caressing his thick calves with his cold feet.

Nights like this: Bucky can’t sleep because his husband has stolen all the covers

Sam snorted, had to stop himself because he could’ve broken the plate he was holding. He was standing by the sink washing the dishes from dinner. He was halfway through his chores when Bucky walked in, dirty and his head covered with sticks from when he cleaned up the rotten treehouse in their backyard.

Sam set the plate on the side as he looked back at Bucky, shutting his eyes when he realized he just set his wet hand on his clean sweatpants. Bucky chuckled at that, moves closer to Sam, and sits on the island, watching Sam recompose himself.

“I think you left your glasses by the T.V., baby,” Sam spoke lowly, his eyes dragging the icky frame of Bucky, “because your eyes are clearly not well at the moment.“

Bucky had a huge smile on his face, and it looked like it hurt, because it did; Bucky’s heart yearned for a love as playful and magnificent as this one and here it was, bold and brave, Sam Wilson was an angel from up above that looked even more magical when he was soaked under that golden hour sky.

“I mean, just look at you,” Bucky spoke, but it sounded more like a whimper, like a hush, one that was nervous in every roll of a letter. “You’re standing there… wearing your favorite shirt and my sweatpants…” Sam snorted at that, and Bucky couldn’t feel his face, “You’re just… Wow. Look at my husband, there he goes.”

“You need to schedule an appointment because I am hideous,” Sam pointed out, turning back towards the sink. He turned the faucet back on and no sooner was Bucky was pressed against Sam’s back, wrapping his arms around his lover’s waist as if he was a star itself, “Alright… Fine, I’m a little bit of a cutie.”

Sam hummed, long and drawn out, swaying along with Bucky, and then they finds their hands intertwined together for a short while before Bucky decided to join in on the cleaning. Sam would find Bucky sneaking glances at him, and Bucky wonders how much gold an angel could actually reflect on their body, because Sam was just glowing in sunbeams today. Sam knows what’s running through Bucky’s head, and he really just adores every single bit of it.

At the moment when he’s about to rehearse his proposal in his mind again, a soft hand brushes the unruly chocolate strands of hair that fall out of his low bun. Bucky discreetly tucks the slim ring box in the pocket of his suit then.

He inclines his head on instinct, eyes locked on Sam’s tall frame, drinking in how handsome he looks in a Jafari print suit. The emerald green is striking on his rich dark skin, and the simple white tee he wears underneath softens the refined look.

Sam flashes him a small grin before slipping in his chair.

“Sorry for taking so long, man. I think one of the patrons got a mean bowels situation.”

Bucky finally takes interest in his Firesuite, sipping at the drink to hide a smile. It’s probably not his best idea to have ordered this because the cayenne and ginger syrup make him even more feverish than he already is. 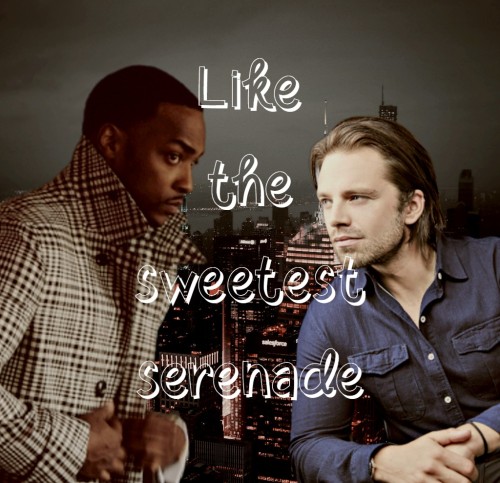