Azriel : im too emotionally unstable for jury duty, can i be excused?

This is by far one of the best fanarts of Azriel.I don’t care what anyone says,but this is my baby bat🥲That’s exactly how I imagined him.

Feyre: So, how have you been lately?

Nesta: Fine except for this headache that comes and goes

Nesta: Oh look, there it is

if mor and eris have any form of romantic connection in the next book i will riot. sarah has no right to undermine those of us who have gone through assault or sexual discrimination etc, Mor is cannonically bisexual who prefers women. there are two possible love interests, Emerie and Vassa. i would love to see her find her person, just as much as i want eris to realise how much of a piece of shit he is. the fact that mor was so blatantly left out of acosf says a lot, either she was left out of major plot points on purpose or sarah hasn’t decided which route she wants to go down as she’s still looking at our reactions to ships etc etc

Rhys: You volunteered to chaperone Nesta and Cassian up at the House?

Rhys: You feel you performed this job to the best of your capabilities?

Rhys: Nesta and Cassian have had some form of sex everyday up there, even while you were there.

Feyre, to her scrambled eggs: oh what ever shall I do with Nesta!

Rhysand, pulling out binder: ah yes I’ve been thinking about this for MONTHS now! I have a brilliant plan all figured out don’t you worry Feyre Darling!

Feyre, reading over his shoulder: This just says “House arrest” and “Make her Cassian’s problem”

@highfaenesta working on a Cassian and Nesta ballroom dance piece now, thank you for the suggestions! (will be doing a few of them) ☺️ 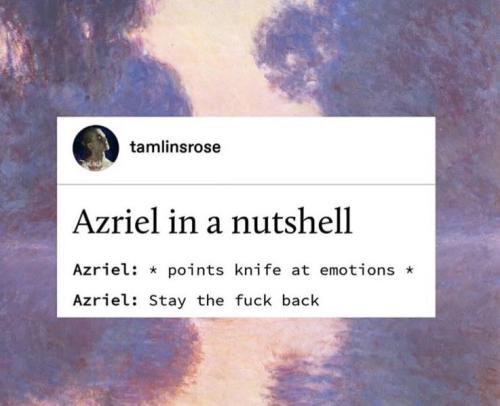 looking for blogs to follow, like/rb if you’re a gayris (gay eris) stan

(and yep this meta gets personal but not uncomfortably so, promise 💁🏻‍♀️)

Elain wearing cobalt blue gown (color of Azriel’s siphons) in acomaf when they first met, wearing pink gowns in acowar (her color, flowers, roses) and Azriel going still at her sight, wearing amethyst/purple gowns in acosf (blue + pink = purple) during winter solstice when they had their almost kiss, in conclusion elriel endgame argue with the wall.

i have more Aedion thoughts but what else is new

but to put it into context, literally the page before Rowan dropped the “Gavriel is Aedions father” bomb so emotions were already pretty high for Aedion and Aedion explicitly states in the text that Evalin, Rhoe and his trainers would have know about Gavriel and kept it from him (probably to protect Aedion from Maeve but i personally think that knowing the person you are supposed to stay away from would really help you to actually stay away from them but that’s just me)

so Aedion is already angry that he has been lied to his whole life by his family, then he finds out that Aelin also lied to him literally the night before when they were talking about the blood oath so that must have been the icing on the cake of family betrayal, which he found out all about in the span of a couple of minutes. especially considering that the blood oath has been promised to him since he was a child and he has made plans to help Terrasen the rely heavily on him being a blood sworn general because he would have more authority than just a regular general. i would also be rather pissed to find out this information. was breaking shit and swearing a bit much? yeah, but they’re fae and the fae just act like that. it’s not like Aedion in the only one to ever overreact to a situation. Rowan literally almost killed him in that scene, i would also call that an over reaction.

so anyways, stop slandering my boy. his reactions and emotions are perfectly valid. i’m sure most of us would act the same all things considered.

When Emerie first tells Nesta about her family she said, “Mother died giving birth to me […].” Chapter 25.

But when the girls are at the base of Ramiel and sharing their stories, Emerie says, “My father once beat me so badly he broke my back. […] He beat my bother before that. And she… I think she shielded me from him, because he never laid a hand on me until she was gone. Until he beat her so badly she couldn’t recover. He made me dig her grave on a night with a new moon, and told people she’d miscarried a babe and died from blood loss.” Chapter 68.

I guess it could be explained away by Emerie not wanting to tell the truth to a practical stranger, but there was no hinting in the first mention of something not quite right about her story which makes me wonder if this is shoddy writing. I’d hate for that to be the case…

i recently joined a book club full of final fantasy xiv players (we are all ascian fuckers, too)

they convinced me to read a court of thorns and roses which i know is super controversial but im really liking it so far~ it’s nice to be part of a group thats not picking something apart for how problematic it is and instead is just like “oh, if you like the fae and flawed protags you’ll really like this”

but thats probably because theyre all 25+, not 15 lmaoooo

anyways i’m like 10 chapters in ish. i’m not sure what to expect from it i dont actually know any spoilers or anything, anything ive heard i forgot about. so i’m excited to see where it goes!

Its a new book by a big author (Sarah J Maas). The full title is A Court of Silver Flames. It’s 800 pages of pain.