•cursive and you know it

•he’s so extra ofc he writing in cursive

•would you expect anything less from him tbh

•he loves to silently gloat abt it too

•it’s kinda messy and the letters are spaced out weird

•his handwriting looks so gorgeous no complaints here

•he writes super fast too he really is a typewriter

•it’s neat and easy to read

•he definitely curls his Y’s

•his I’s are definitely dotted with hearts

•honestly juts give him effort for trying

•you can barley make out a word

•tell him to stick to texting

•he either writes in hieroglyphs  or ancient text

•he just wants to piss everyone off

#obey me imagines, #obey me shall we date, #obey me mammon, #obey me headcanons, #obey me scenarios, #asmodeus obey me, #belphegor obey me, #mammon obey me, #satan obey me
16 notes · See All
deathslingText

My brain: you’re going to have jellicle cats stuck in your head

#obey me, #monster boyfriend, #shall we date obey me, #demon, #Satan obey me, #satan avatar of wrath, #shall we date satan, #satan, #paws and claws, #omswd Satan, #cat Satan, #neko Satan, #cat boy, #kemonomimi, #I watched the cats movie the other day and it injected multiple song viruses into my brain, #it was so much worse than I expected, #it was bad in ways I couldn’t have imagined, #I recommend watching it to cringe and laugh and scream, #I screamed a lot, #it was wild, #and bizarrely and uncomfortably h*rny
64 notes · See All
undying-vagabondText

Diavolo considered himself a progressive demon. His student exchange program was a success. Now he wanted to try another idea.

“So you want me to service demons?” That was a recipe for disaster.

“Yes. With a group you’d be comfortable with.” He motioned to the demon brothers whose reactions varied greatly. Lucifer and Satan seemed intrigued, Asmo was hyped, Mammon and Levi had stopped functioning, and the twins were interested as well.

Diavolo wanted to try this experiment before launching it out to the rest of the students at RAD. He wanted demons to appreciate each other and be treated as equally as possible.

Anyway, he was the demon lord so did you ever have an option ?

“ok 🙃 I’d be glad to participate, what a joy.. I’m so ecstatic to clean up after others… yay”

Diavolo wasn’t daft but he chose to ignore your unenthusiastic response.

OHHHH this man WILL make you clean

As you do so, you’ll feel a pair of eyes trailing over your form as you reach up to dust. Making you nervous with his ínstense stare, you might stumble here and there.

Lucifer’s workspace is now dirtier than when you started—

Taking a look at your mess, he will let out a sIGH before eventually calling you over and pulling you towards him, landing on his lap.

Now you’re just watching him do paperwork. He doesn’t say anything yet you squirm.

After finishing, he’ll gaze around the room before tightening his hold on you.

“My my what a clumsy maid. Should I punish you for making a mess of my office?

Cocky mf but also a simp

He’ll grin at seeing you in the outfit (whilst blushing) and say some shit about this being an honor, to serve the Great Mammon.

Other than that, he wouldn’t really force you to clean or anything?? I feel like he’d just lowkey tell you to take it easy

Mammon will try to seem tough and PERHAPS ask you to clean a desk but if you try hard enough, he might end up doing your work for you.

Example: You knew he was watching and not really in the mood to do anyone’s work for them, you let out a sigh. Mammon was quick to notice it but didn’t think much of it. At the third sigh, he was taking the rag from your hand.

If you mention it he’ll be like “I’m just doin’ it because you don’t know how!” riiiiight

This is def a scene from an anime is one of his first thoughts.

Sure, he was aware that this would happen and had prepared himself but HE WASNT PREPARED!

My mans is a blushing mess

Although not as tidy as Lucifer, his room is decently organized so he wouldn’t ask you to clean because…

1. He doesn’t want you to judge his things (even if he knows you wouldn’t) 2. He doesn’t trust others to touch his things 3. Because you shouldn’t?? dirty your hands?? cleaning for him??? that’s ?? a sin??

May just end up asking you to either play with him or watch him play.

This man will RELISH every second of this, often looking at you from the corner of his eye.

*eyes meet and you smile* blushhhhhhh

However, I feel he would also take the opportunity and just photograph tf outta you for memories >.<

Boy will be thinking about this for weeks

He’s generally an organized person but some of his books need cleaning and he only trusts you not to ruin them.

Satan does expect you to treat this seriously but won’t be too tough on you. Allows you breaks and might even read to you after he caught you listening in while cleaning.

You were gently wiping the shelves when he sat by the window and opened a book of curses (wonder who it’s for 😇). He looked like a prince with the sunlight hitting his pretty face

It happened several times so he ended up telling you to leave that and join him.

Overall not a bad experience

Loves seeing you dressed up

Thinks you’re so cute, especially in a uniform. Not many people can pull this off. “MC~~ how can you look so pretty hm?”

He’ll make you switch clothes lmao. Wants to try out the outfit to prove how he really does look great in everything (spit them facts king 👑)

Asmo won’t miss the chance to take pictures and upload them to Devilgram, the two of you in each other’s outfits was enough to bring out the jealousy in many people (cough cough Mammon Levi)

As a firm believer that pretty bitches don’t do manual labor, Asmo won’t put you to work. You’re better off doing each other’s hair, cuddling, and fun things in general

Would probably ask you to cook for him

UM I’m a maid not a chef “Yes I do the cooking, yes I do cleaning”

Beel would invite you to cook together or sum cute shit like that. He thinks it’s a great time to bond, especially over food. Mans has all he needs, food and you.

Offer to feed him and Beelzebub will PROPOSE on the spot. Homeboi will sweep you onto his arms and march to his room, muttering something about eating dessert in bed???

Satan will enter the kitchen and witness this like ?? bby lost his appetite after hearing that—

Just join him for a nap and you good

At most, Belphie will just ask you to make his bed extra fluffy or add another pillow so the two of you can be comfortable. That’s all I can see him making you do.

Not @ y’all sleeping the entire afternoon together and waking up like ?? Oh?? Time’s up?? Tbh you both might go back to sleep. Everyone will be like where tf are they??? What are they doing???

Asmo: Maybe they’re roleplaying one of those maid fantasies from Levi’s animes. Ooooh~ I’m so jealous! ☆*。★ﾟ*♪ヾ(☆ゝз・)ノ you think they’ll let us join?

Cue Levi getting red. “You mean??!” Mammon will choke on his food, quick to protest. Beel knows better and will continue to eat his dinner.

*the demon bros and MC sitting around a table*

MC: nothing, nothing. I just… I love playing God *chuckle*

Beel: what do you mean?

MC: I kill them. Make them do horrible stuff while I just watch and enjoy the show

MC: I once made the wife cheat on her husband and then forced the husband to watch while they were at it. The Drama Queen died of a heart attack 🙄 like, it’s not that serious.

MC: I once created a sim of every single person I disliked and then tortured them until they died. You know, starvation, burning to death, exhaustion: the basic stuff.

MC: Or that one time I put my Sim’s daughter in an empty room to see how long it would take her to die, but she got taken away instead. Ruined my experiment. Or when I - *laughs* - made my sim go through so much trauma -

Lucifer: What the fuck MC

MC: you know what, at least we now know why humans should never have the power of a God *sips drink while the Demon bros continue to stare at them*

To go along with A Fanfic I Wrote about a Mafia AU Satan, I wanted to make a design for my boi! I wasn’t quite sure if I wanted to adapt his school or casual outfit, and in the end it ended up being a mix of the two.

Def not giving him that bow thing he has in demon form tho. XD 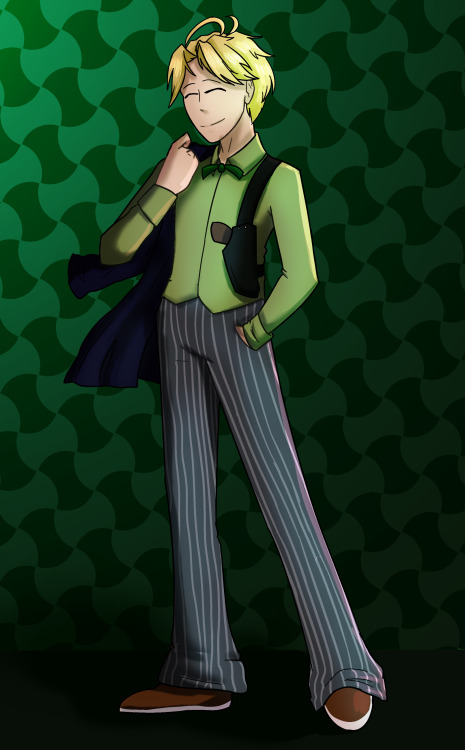 Eve: İ hope i have a son like you someday ^^

#i love this new keyboard i wont stop, #this is it this is the dynamic, #eve killed satan in 1 critical hit, #obey me original character, #obey me, #lucifer obey me, #satan obey me, #diary, #oc: eve
30 notes · See All
wegotasatanselfshipperereLink
The Underestimated - Ally_Kats - Shall We Date?: Obey Me! [Archive of Our Own]https://archiveofourown.org/works/27848214

Summery: Satan isn’t one to handle disciplinary meetings. When he’s asked to he complies, but finds himself in an… Uncomfortable situation.

I wrote a character intro for Mafia AU Satan. This isn’t off on any one AU, just my own take on it. May make more of these for the other brothers. 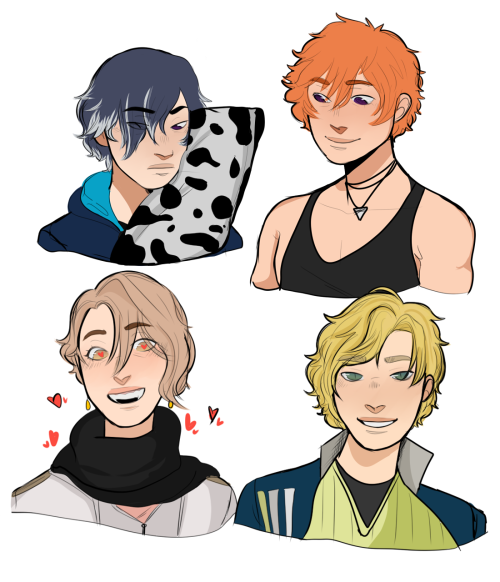 satan is the type of person to pay attention to what people dislike and then do exactly that.

something along the lines of “i hate when people pour their milk before their cereal!”

and then satan is just in the background pouring the biggest mfing bowl of milk dropping mini wheats in, and he would wait until they got soggy before eating them. and he makes SURE that you see him do it.

#obey me satan, #obey me, #obey me headcanons, #obey me!, #satan obey me, #i can see him doing this and its hilarious, #milk before cereal gang wya
75 notes · See All
satanlovescatsAnswer

In the midst of reading a book, he failed to notice the offending object until turning the page, catching sight of it in the corner of his eye. He jumped from his chair, tossing his book at the infernal thing.

Blinking, he realised it was just a cucumber. Why the fuck is there a cucumber there?

#satan answers, #footsteps down the hall; satan and delilah, #obey me satan, #satan obey me
27 notes · See All
satanlovescatsText

Put a cucumber by Satan, see what happens.

Imagine being so angry you give birth

I honestly forgot how many times I’ve posted about this. So now it’s going to just be titled “Why you should rename yourself into a pet name”

So here it goes! ITS A SERIES Y’ALL

Why you should rename yourself to a pet name: