Awww, thank you so much for this ask! <3 I’m so glad you enjoyed the HC’s last time. I had a ton of fun brainstorming and writing them. But, man, this fluff one was a bit of a challenge, lol.

Fluff isn’t something I typically write, other than some brief moments, so coming up with something that was almost completely fluff was an interesting creative exercise. I hope you enjoy these as well. :) And also thank you for being patient while I waited to feel up to working on this. :)

So, without further ado, here are some fluffy Sebard and Sebagni headcanons.

Awww, you’re welcome, darling! 😊 Thank you for writing a fic for such a rare pairing. 💕 Ever since @plague-of-insomnia and @luci-on-the-moon turned me on to that ship, I’ve been looking for Sebard content wherever I can find it. I’m really looking forward to reading it.

Cause lately it feels even more like there’s about 3 of us left.

#black butler, #kuroshitsuji, #黒執事, #sebard, #sebastian michaelis, #sebagni, #basically anyone who is into shipsother than or in addition to sebaciel, #don’t mind me, #just feeling down, #and alone
54 notes · See All
vaderfanaticLink
Blind Date - vaderfanatic - Kuroshitsuji | Black Butler [Archive of Our Own]https://archiveofourown.org/works/25798438

After a painful break-up, Sebastian is resistant to the idea of dating again.

Bardroy, an Iraq War veteran, is skeptical he is ready for romance after battling his demons for so long.

Thankfully Mey-Rin, Sebastian’s co-worker and Bard’s best friend since childhood, sets them up on a blind date.

Hi, friends! I’m so excited to FINALLY share the first of what will be many installments of my Sebard series! It will consist of various one/twoshots following different aspects of their relationship. Furthermore, all works will be within the same universe (I just can’t commit to a multi-chapter fic, lol).

Thank you SO much to my saviors @thefaultinourstarscream and @al-khuffash for helping me edit the crap out of this thing.

Their song is “Sex On Fire” by Kings of Leon

It was Friday night. Tanaka offered to supervise Ciel in case he had a night terror. Sebastian was invited out on the town with Finny, Wolf, and Bard. It wasn’t every night that they could all go out and have a few drinks.

The night rolls on and so do the drinks. Finny and Wolf are chatting it up while Bard and Sebastian have a drinking competition. Hazy vision, drunken laughter, and clanging of beer mugs and liquor glasses.

Wolf and Finny left hours ago. Bard and Sebastian stagger out of the bar; hot under the collar and tight in the pants. Teasing eyes and thoughts of crossing a line that should not be crossed.

Bard shoves Sebastian against the wall outside of the bar, clenching his jaw as his eyes float down to Sebastian’s soft lips opened in surprise.

All rationality leaves his mind as his hand stables himself against the wall, stepping forward. He presses himself up against Sebastian and growls lustfully.

Sebastian wastes no time, capturing Bard’s lips in a fiery passion. His lips are like the flesh of a juicy peach. It was addicting. Their frantic hands pulling and tugging as they dance drunkenly over towards an alleyway, lips locking and parting only for oxygen.

The second Bard hears his zipper unzip in the dark shadows, he realizes that he is in for a devilish treat.

#sebard, #first time writing for them, #this is supposed to be a headcanon, #black butler, #sebastian michaelis, #bard, #seb and bard, #baldroy, #yeet
7 notes · See All
plague-of-insomniaAnswer

Omg this ask is so old but tysm for sending it! Dreaming of Sebard is always nice 😍👌🏻!

I can imagine the one and only time Seb allowed Bard to make their morning, before collections breakfast.

Sebastian is probably certain hot sauce doused “charcoal” in an uncooked store-bought tortilla does not quality as food.

“Some people want it all

But I don’t want nothing at all

If it ain’t you, baby 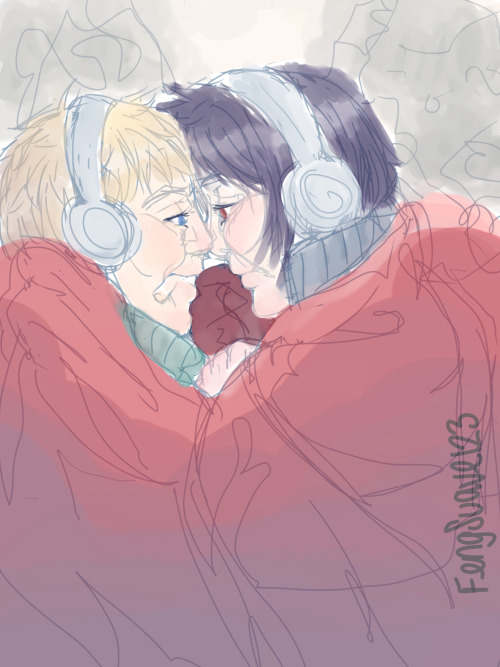 A bit late… And a terrible quality image, because my laptop has been out of commission, and my scanner is broken #unluckygirl. But I finally finished the late birthday present for the wonderful @plague-of-insomnia

As their self proclaimed number 1 Sebard fan girl, I just had to draw something from their ‘Promise’ Series. Specifically the one they dedicated to me, for my birthday last October.

“What the actual hell.”

Bardroy uttered aloud when his pack of cigarettes turned up completely missing. And there was no way he’d smoked them all yet! He’d gotten them yesterday!!

He’d nearly torn up his and Finny’s shared room looking by now, and groaned as nothing, not even one cigarette, came up!

Well damn, guess he’d have to try and do an extra good job today, somehow, so he could go out and get some more again with the Butler’s permission.

Sighing, Bardroy trudged out of his room and back down to the kitchen, only to see… The pack of cigarettes lying right there in the middle of the kitchen table.

Instantly he grabbed them, inspecting them instead of just taking a new cigarette out. Why else would they disappear suddenly and then show up again if not because someone clearly decided to take one or two for themselves? Not to mention the fact that they really bother hiding that they’d done it, like they didn’t care if Bard knew or not. Huh. Who could it be?

The back door swung open and the butler quietly came in, sighing as he stood there with two pheasants under his arm and his suit loaded with bullet holes.

“Bardroy, could you please go out and dispose of the bodies littering the yard out there?” He asked casually, heading over to put the pheasants down on the counter.

“Oh yeah, sure.” The chef mumbled, putting his pack of cigarettes back in his pocket.

He headed for the backdoor himself, grimacing as he opened the door and saw the massicre littering the yard.

“Jesus, they came pretty close this time, huh?” He commented.

“Yes, as to do expected when they double their numbers.”

He wasn’t even looking up from preparing for dinner.

Bardroy rubbed the back of his head and sighed.

“Y'know, Sebastian, you coulda asked me if-”

“I didn’t need your help, nor were you around in the vicinity when they attacked so I wasn’t going to leave and go fetch you only to risk them breaching the building. We’ve had this conversation, Bard.”

“Right, ‘cept I was actually gonna say you coulda asked me if you wanted to borrow a smoke.”

Sebastian didn’t respond at all to this.

“Might wanna change yer uniform, that shit stinks more than gunpowder and blood, just so ya know.”

And then he left out the door to get to his job.

#Drabble, #my writing, #drabble prompt, #Sebard, #kuroshitsuji, #sebastian michaelis, #Bardroy, #sorry it's not that shippy, #XD;;, #but thanks for the request!
3 notes · See All
bapydemonprincessAnswer
So sally's more human than demon?

YUP, she likes to insist otherwise herself, though. XD It sort of goes to her head, not to mention she things “hellish” and “demonic” things are cool! So there’s lots of times where she tries to express how much she likes it by swearing on Satan or going “HAIL SATAN!” or flipping off local churches… 🙈 If a demon’s hair could gray from stress, Sebastian would be as white-haired as Agni. 😂😂😂

Cináed but pastel soft boi rather than demon hellspawn.

#kuroshitsuji, #sebard, #notsfw, #apocalypse au, #u may not be able to repopulate the world but u sure as hell can try, #txt
69 notes · See All
thotsebText

bard: can i ask a favor

#kuroshitsuji, #sebard, #txt, #he pulls out the etiquette when faced with possible boochie
76 notes · See All
thotsebAnswer
You can't just vaguepost about housewife!Seb like that! Where's the flirtatious woman who flusters all the men? Who flirts with her husband's friends shamelessly? Who is an absolute goddess who would probably make you clean up the mess after she's made you nut like 3+ times???

this reminds me of a webtoon i read where a housewife keeps being left alone by her husband and shes really lonely so she fucks the guy that delivers her chicken and now just keeps ordering chicken so the guy will come over and they would bang and i stopped reading it because it was fucking terrible however its fem!seb and bard