Maybe it’s just because I prefer a cleanshaven face…but the notion fills me with a deep, existential dread. 😨😨😨

@bapydemonprincess recently requested a few soft Sebagni headcanons from the Metanoia AU, as well as “what they like from each other.” I hope you enjoy! >w<

As far as what they like from each other…

Trash demon that he is, Sebastian obviously enjoys the passionate side of their romance, but it’s Agni’s tenderness that he cherishes. Bassy’s accustomed to being valued based on what he can do for a master, and being treated like a mindless weapon. Having a person who loves him unconditionally, and is sweet, caring, and considerate because he wants to be good to Sebastian and not out of ulterior motives…that’s huge.

Agni loves it when Sebastian is willing to set aside the “perfect butler” façade and talk openly with him about his insecurities, his emotions, his past, and so on. Sebastian generally keeps humans at arm’s length, but, in this AU, he’s at his most vulnerable around Agni. The khansama recognizes this as a sign of the implicit trust Sebastian places in him, and values it accordingly. After all, it takes a very special kind of human to be given a place in a demon’s heart.

Has anyone noticed how close alike Vincent and Sebastian look?

Hi, anon! I’m pretty sure you’re thinking about this scene from Chapter 49, the flashback sequence where O!Ciel and Sebastian are telling Arthur what’s really been going on over the course of the arc. Here, Sebastian is literally “playing dead,” as you said…and he’s extremely offended at having to lie in such a vulnerable position before a bunch of mortals! 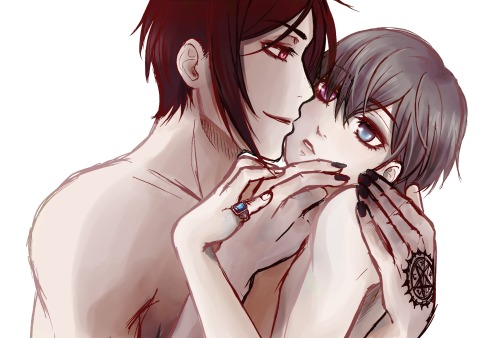 Some one PLEASE tell me you got the reference.

Character Board 3/? - One Hell of a Bastard - Sebastian Michaelis

Since this fandom is slowly dying…

Sebastian: great job helping mr.yellow get better! Without you, he would have never flown again.

Finny: but why was he flying away when I love him so much?

Sebastian: so today my Lord we have three cases set out by her majesty; the first one is the- my lord are you listening?

I’m so happy that you are, hon!

It’s getting worked on right now as I type this out, and I hope you, and everyone else love chapter one as much as I do once it’s out!!!! 💖💞

and just in case if anyone missed it, here’s the link to it’s snippet!!!:

I need some Black Butler fans to hang out with…

His eyes, she thinks, shine like finely cut and polished rubies. His movements, she knows, are nothing but calculated and meticulously precise, never being anything less than perfect for his young master. His smile, she observes, it’s ever changing, from fake, closed eyed smiles, to his tiny smirk that never reveals his amusement, but every once in a while a smile that shows utter bliss and truly reaches his eyes when he spots a tiny kitten.

Now, she stares. His eyes, they glow through the darkened streets like hot embers, but flash with ungodly joy. His movements are flowing and somehow filled with haunting grace as he preforms a dark dance with those around him. His smile is too large, dark, entirely mad, and psychotic.

That’s how she knows that his is truly…

A demon hiding behind angel eyes.