The Endgame that we need

Warnings: NOTHING but fluff (lmao this is a family-friendly household).

Summary: Y/N, Sebastian Stan and Chris Evans were grouped together for an interview to promote Avengers: Infinity War (where reader is a part of) and they played a little game.

A/N: This is requested! To @cotton-candy-bubbles, I hope I did something good, sksksks. I TRIED. Also, the words inside the parentheses is how you pronounce the word properly.

The three of you are seated in a space specifically made for the interviews from a couple of people. Your assistant handed you a coffee that you asked for a little earlier, you got up and took it from her, “You feelin’ alright?” she asked you and you nodded before swallowing.

#Sebastian Stan, #he looks so soft I wanna go hug him so badly, #let me squish ur cheeks, #smol bean, #awkward selfies, #those doe eyes
69 notes · See All
damnitsebText

Okay Listen. It’s Dec. 1939, a 22 year old Bucky is taking his girl on a date to see Gone With The Wind and then 2 more times after because she just loved it so much and it was her FAVORITE book. For the next couple of weeks, Bucky is at the mercy of his girl acting like Scarlett, pretending to be all haughty with a dripping southern accent and he can’t help but to be her Rhett.

Then posts a video regarding the challenge in a blue sweater that matches his eyes. Makes sure the first person whose name he says and tags in that challenge is Sebastian Stan.

Occasional sweet posts about his dog and family for a few weeks.

Takes a break for a couple of days.

More selfies with the adorable dog.

Posts about Beautiful trees near his house.

The changed look of the beautiful tree near his house.

Another picture of the trees changing colour in autumn.

Roasts his own fashion sense from the old 2000s pics.

Then again reminds the world of his infamous Boston Jesus look.(back at the thirst trap)

Another thirst trap. This time it’s even more obvious and carefree. Left boob, the chest hair and a nipple on full display, only wearing some sweatpants

But manages to give it all of the soft and adorable feels too, by making it clear in the caption that his dog’s sitting on his tattoo which says the name of the cute pupper. There is also a little black star near it btw. A very important detail.

Posts another picture of Dodger curled up on the couch watching tv.

A side note because I’m rewatching Book of Atlantic for the fourth time, but dubbed in my language, yee:

Considering how Sebastian never lets go of his butler persona, a French audience would expect him to address pretty much everyone formally (especially with the era Kuro takes place in). But he uses the informal “you” with Ronald and Grelle (not Will, though, he’s always very formal with him –as seen in Book of Circus– and it’s reciprocated, so this is not just a “reapers get no rights fuck reapers all my demon homies hate reapers” kind of thing) and they do it too, which honestly makes their scenes together better? It sounds like he and Ronald are just having fun and being competitive for shits and giggles. It also completely destroys the “Sebastian hates Grelle” vibe because they sound like close friends. I’m not complaining.

Not to mention, Grell calls him “dear Sebastian” all the time and I feel soft as fuck and the “destiny or coincidence” convo is basically translated as “fate or random/luck/fortune” (even though it could easily have been translated as coincidence, which is clear-cut) which is much more ambiguous and generally makes Seb sound less cold towards her. He also asks for things nicely. I’m probably overthinking decisions they made in five seconds but yeah.

Anyway, I could talk about how French Sebastian is basically a different character FOR HOURS.

#nah but seriously french seb is like moderate fanon seb, #i hate his voice but at least he sounds soft and confused (lets ignore the less family-friendly parts of the dub) and that makes it worth it, #anyway stan french sebastian, #kuroshitsuji? who's she? i onky know le majordome en noir, #kuroshitsuji sebastian
15 notes · See All
amarriageoftruemindsPhoto

BEEFY #Bucky with the good hair & the guns out 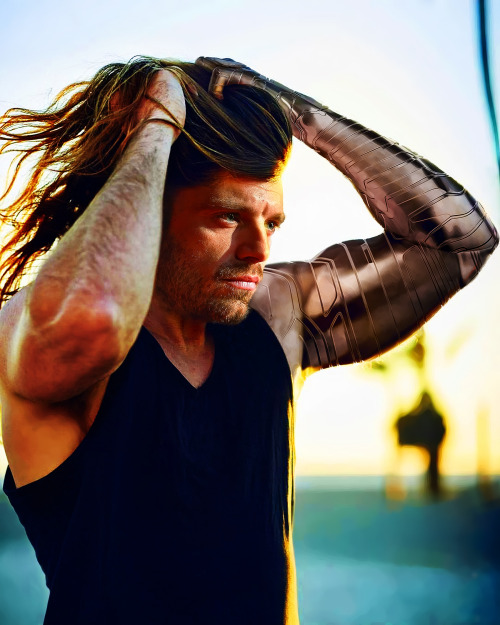 #bucky barnes, #sebastian stan, #bucky with the good hair, #soft bucky, #my stucky manip, #dat's me, #mcu, #black & white version under the cut, #quickie before bed, #this one giving me beefy biker bucky vibes, #imagining steve seeing him for the first time, #across a parking lot / garage front at sunset like THIS, #😍, #yet each man queues the thing he loves, #accidental grungey pinup bucky
78 notes · See All
heavenlysebText

#Sebastian Stan, #the hair omg, #he looks so soft I wanna go hug him so badly, #his stare is going to make me melt
46 notes · See All
unearthlydustPhoto

I mean, how often do you find someone who can be cute AND hot at the same time?😄

Warnings: Smut… not toooooo in depth but smut, talk about possible past “problems” , Chris being a fucking lovely man because I could

A/N: THANK YOU SO MUCH FOR REQUESTING THIS!!! I really liked writing for him and I have never done this… definitely WON”T be the last 😉

Tossing and turning for the past 20 minutes, you finally sit up in bed. Your mess of hair falling into your eyes as you stare down at your feet. The cold wooden floor below sends a shiver up your leg and to your spine. The bed was so warm… and the man laying in it was so inviting, but you knew what this really was. You didn’t want to stick around in the awkwardness as he tries to ask you to leave.

Dantily, your feet pitter-patter across the floor, grabbing the pile of garments by the door and ever so slowly turning the doorknob. Everything was silent… until you heard the sheets move behind you. Your eyes clench shut, a desperate attempt at staying as still as possible and just hoping he’d fall back asleep and not notice your figure against the pale white door.

“Where do you think you’re going?” A tired, hoarsed voice pipes up from behind you as the sheets move once more, this time followed by heavy footsteps walking in your direction.

“I figured I’d see myself out,” turning around, you face the man that caused you to exude so much joy and happiness just hours prior. His feet stop only a few feet away. His arms crossing over his chest as his head tilts downwards, a disappointed look laced in his blue irises as you finally met his gaze. “I know how this works, Chris. And I’m not too good at the “morning after goodbyes” and all that.”

His eyes don’t leave yours, his shoulders tense for a few moments before his hands drop to his sides, and then cross the distance between you both. His hands grip the pair of boots you were trying your best to juggle on the pile of clothing in your arms, taking them and tossing them to the side of the bed which he came from. A shy smile rises to his lips when he takes the over-sized sweatshirt and jeans from your hands, tossing them with the boots and grabbing your free hands immediately before you had any time to react.

The look of confusion glazed over your features. This wasn’t what happened… ever. As he pulled you close to his body, his eyes became soft, yet dominant.

“You’re more than just a one night stand.” You searched his eyes, looking for any sign of him not speaking his truth… and you found none. This territory was new. It was unfamiliar and terrifying. But it was also comfortable.

In his presence, you felt safe… in all ways. He made you feel mentally safe as though you could tell him your entire life story and he’d not spill one drop of judgment for anything in your past. And he made you feel physically safe from anyone who would ever try to cause you harm.

Your eyes begin to light up, like they were the night before when you would look down into his soul as you rode him to the point of absolute ecstasy.

Like the way the looked when he ran his calloused fingers through your hair while you talked about the book you were writing and how absurdly passionate you were about it. All while leaning up against his bare chest, your naked form between his legs as he relished in the warmth you gave off both physically and emotionally.

It was also the way your eyes lit up when you met, when he took you away from the men that just caused more harm. When he saved you from them and yourself.

“You sure about that? I am a handful ya know?” You questioned with a smirk pulling at the corner of your raw lips. A yelp escapes you as he pulls you deep into his embrace, his hands cupping dramatically at your ass cheeks, his entire hand engulfing your semi-bruised flesh while his smirk mimicked your own.

“These handfuls… YOUR handfuls are exactly what I want.”

The way he wants to laugh but restrains himself. 🤣🤣