Joe and Nicky trying and failing to romance Booker like:

Someone released a podfic of one of my works!

Go give this person some love! Their voice is so soothing and it made me so happy to hear the words my brain made actually read out loud. 😂

Hold on, from that last post what if Nicky and Booker started bonding with a bar brawl they got involved in? And that’s when they had their first bet together? Because Nicky said something along the lines of “Bet I can trip that guy before you” and it was On between from now on, no take back.

It’s still well early in their relationship, Booker has been with them for a couple of years max and things are still a bit tensed and unsure between them, they don’t know how to act around each other yet and what the other wants and is like, after a mission they both go to a bar to wait for Andy and Joe still busy somewhere else. They sit and drink and wait for them and for whatever reason, some guy start bothering someone and it gets out of hand and the entire bar ends up fighting. And because they’re tired and a bit drunk they both get involve and that’s when Booker realizes Nicky isn’t uptight and patronizing like he thought he was but he too can get his hands dirty and he can be a sneaky bastard like Booker if he wants to. And that’s when Nicky realizes Booker has a team spirit and is willing to take sides and fight for others and more importantly defends the people he cares for. Which apparently now includes Nicky too he realizes when Booker takes a blow that would have got Nicky if not for him.

#i feel enlightened by this thought#they both have bastard energy nicky kind vibes are just more powerful but the bastard comes out from time to time#see: the bets and the face he does when he's angry#booker is a bastard through and through with kind vibes that comes out for the right occasion they balance each other out#anyway i need to think about their friendship more now#tog#tog headcanons#nicky & booker#nicolo di genova#sebastien le livre#the old guard headcanon
1 notes
sometimes-petty
Text

, tear dropping, heartbreaking, I have run out of words,

For @tog-femslashfortnight’s Femslash Week! A mood board based on my own headcanon that Nile has a real green thumb. The prompt for Saturday was Free Space.

Cacau! I decided to write this one from a different point of view. I really hope you like it, my friend. 💖

Booker had never noticed that Nicky and Joe don’t touch each other when they’re in a group, not until they’re in the elevator of Merrick’s lab and Joe’s hands are shaking, eyes fixed on Nicky. Booker has the feeling that Joe is on the verge of crying.

Sebastien feels awful, sick, like he could throw up anytime; they should have left him behind, he doesn’t deserve whatever will come (because he knows it’s going to be way less than he deserves). He remembers the words he said to Joe when they were trapped in that lab and what if- what if he was wrong all along?

Watching Joe right now, he recalls all the times they watched football together and their inside jokes, he remembers the smell of Nicky’s food coming from the kitchen and the way the couple always sat apart on the table (Booker never understood why, but now he does and he regrets every single word).

He was not alone. He had Andy, Joe and Nicky. His family.

Joe is sniffling and he wants to apologize, to say ‘brother, i was wrong all along’, but he doesn’t. He watches Nicky glaring at him, if eyes could kill, Booker would be dead right now.

— Fuck this shit, — Nicky says, turning around to pull Joe to a hug; Joe hides his face in the crook of Nicky’s neck and Booker just sees the movement of Joe’s shoulders. — Sono qui, amore.

Andy stares at Booker and with just one look she tells him everything: you were never alone either, you had us all the time. they love each other in a different way, of course, but they still respected our pain and you were so blinded by yours that you didn’t notice the love surrounding you.

Joe and Nicky are still in each other’s embraces, one of those lingering hugs that Booker used to give on his wife, when the elevator finally stops.

Booker observes the couple walk a little too far from each other. Andy puts a hand on his shoulder.

— They’ll need more time than me, you know. I almost died, but they almost lost each other.

— Me too, Book. Me too, — she squeezes his shoulder before walking away.

— how they react to you missing your old life

Everyone : * stays intensely casual while Booker puts a hand to his chest *

Booker, switching to French and with Mediterranean Gesturing ™ : Sure ! Why don’t you go ahead and ask Nicky if he’s from Rome then, see how it goes ?

Booker : Listen, I deserved the exile, that was fair, but this is just uncalled for!

Joe, sliding up to Nile, under his breath : I love you, but if they start debating on olive oil versus butter again I’m blaming you.

What’s this I hear about the details of the deleted church scene being released??? Someone tell me what’s going, please! 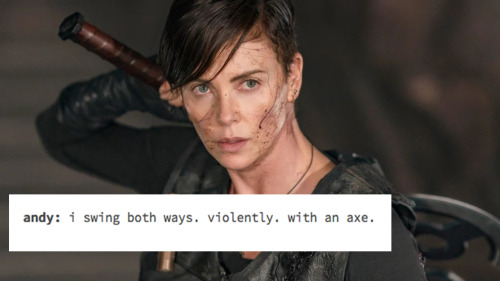 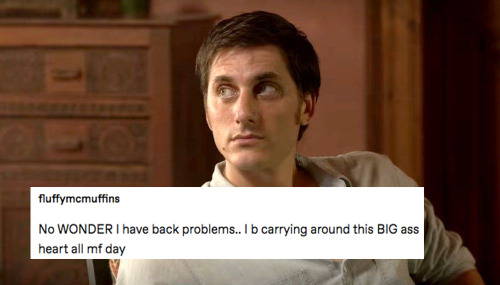 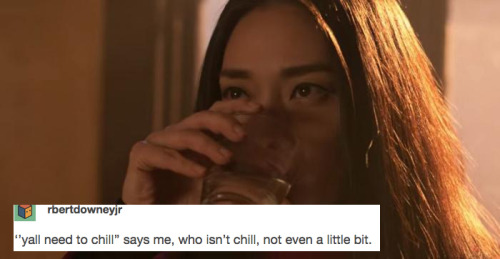 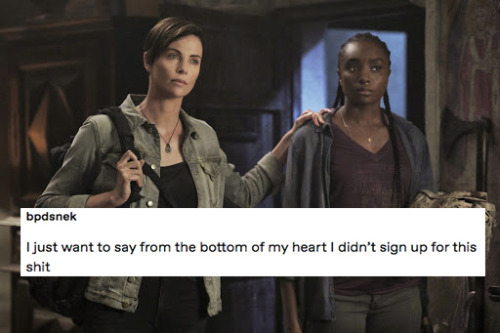