A/n: this is so cute! I tried my best so I hope you like it!

You pressed your ear to the door, hearing your husband’s soft voice talking to the sweet bundle of joy you two had created.

Somehow, you two were doing pretty well in the parenting department. When you first had your child, Sero was an emotional and literal wreck. Constantly asking you if he was doing everything right and if he was being a good dad.

You always laughed at him, telling him how ridiculous it was of him to even ask, in your eyes he was the most caring father in the world.

You felt your heart race as he spoke, something about the time of his voice made you crumble on the inside. This man could melt anyone with just a smile, and you somehow managed to get your hands on him first.

You knocked lightly on the door, opening it to peak in the dark green colored room. The little drawings in the room danced around as you looked at your son, he was seated in Sero’s lap.

His black hair stuck to his face, likely due to the bath Sero had just given him.

“Mommy!” He jumped up, making Sero cringe and hiss in pain as he hit him where it really hurt.

“Hey little man, what’s your daddy rambling about this time?” You quirked an eyebrow, your son ran into your arms and you held him lovingly.

“Daddy was telling me about how you met and fell in looooove!” His eyes went wide as he looked at you, drawing out the word in a teasing manner.

“Oh yeah?” You looked at Seri who just nodded and flashed you a smile, “What did he say?” You scrunched up your nose and rubbed it against his own little freckled nose.

Your son giggled and buried his face in your neck, trying to avoid the ‘attack’ if you could even call it that.

“Daddy said that you punched uncle Denki in the nose!” He gasped, slightly muffled. You nodded, “I sure did.” You smiled, looking to your husband.

“And he said when you broke uncle Denki’s nose that he knew he wanted to marry you!” Your son pulled away, moving his legs and looking at the ground as a signal to be let go.

“Yes, and that’s because your Mom is the most confident woman I know” Sero stood up, scooping your child back in his arms and placing him in his bed.

“Now go to bed, stinky.” Sero stuck out his tongue and laughed as your son pouted, “I’m not stinky!” You snorted. “Now you aren’t because I had to wrestle you in the bathtub!” Sero argued, it was these moments where your heart felt so full.

“Goodnight, we love you.” You smiled, walking towards him and planting a kiss on his cheek as he giggled.

In a way yeas, Izuku was designed in hopes of being able to handle a variety of situations with only him being on scene, or rather, that is the goal of the Hero model androids, so Izuku was made to be able to output alot of force, HOWEVER his body isnt sturdy enough to withstand it. Yeas he can take a beating if its from an outside source ( like if he got hit by a car) but not if the source is internal.

Though he has gotten limiters installed after arriving at allmights shop, but his joints amongst other parts have already suffer quite a bit of internal damage, and so he has beacome a lot more brittel, so he docent really need to output that much force until a piece breaks nowadays.

Sero: what pokemon would you be, go!

Kaminari in pikachu onsie: i don’t who i’d be…

Mina: he’s even wearing the onsie-

Kaminari: Everyone wants to touch your tits dude

Bakugou: I don’t have tits!

Kaminari: Aye everyone! Raise your hand if you believe bakugou has tiddies!

Mina, babysitting them: What do normal brains smell like?

Mina: Okay… so what do not normal brains smell like?

Shinso, not high and just vibing: They smell like iconic

The Baku squad plus Bakugou, who’s starting to regret his life decisions.

Edit: Lol whoops sorry I posted them in the wrong order… 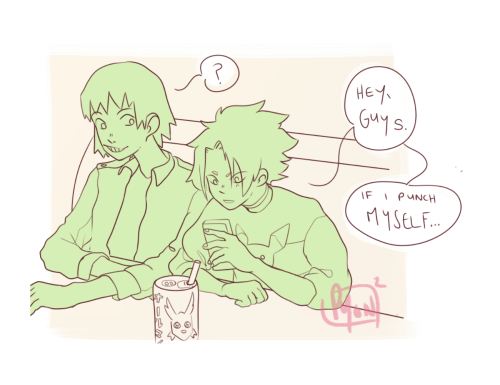 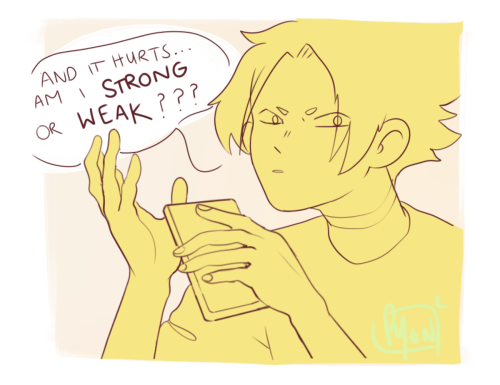 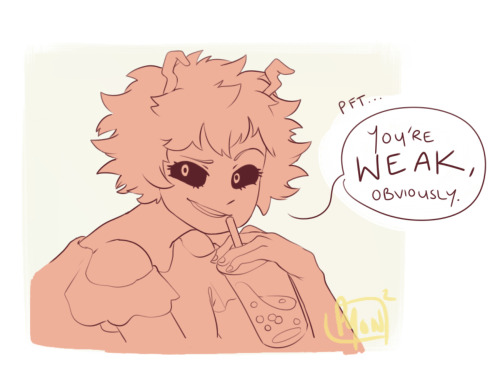 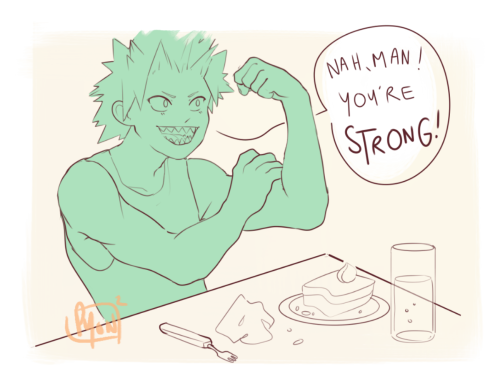 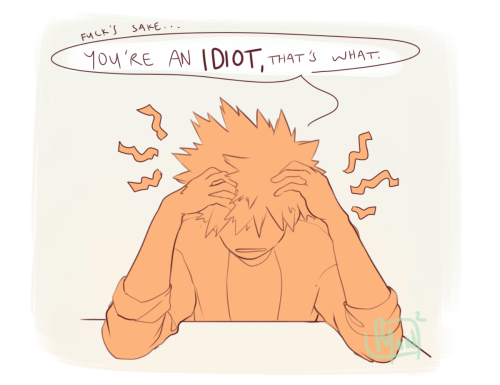 Bakugou: I tolerate all the extras equally. Kirishima…

Class 2A’s very own Sero Hanta has been surrounded by the theatrical heroics of his classmates for over a year. But when danger strikes too close to home, will The Taping Hero, Cellophane, be able to step up to the plate? Or will the world as he knows it come crumbling down?

Kirishima: What the hell have I been on today?

Sero: That… That sounded so much more wrong than I intended it to

And guess who’s not dead! Hah!

Anyway here’s a chapter in resolution to the shit that went on before. Does anyone remember it?? It’s been so long

one of the things ive been working on is a paint version of my icon- the only sticking point is his silly teeth :(( 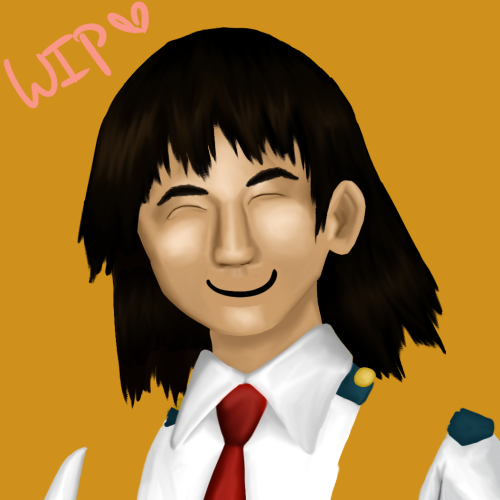 #mine, #wip, #sero hanta, #oh and the backpack straps but those wont take too long, #my art
16 notes · See All
delinquentstuffText

Had a sudden urge to draw them in 70s swag

This concept was a fun idea teehee

I’ve been OBSESSED with the bakusquad members lately so I had to draw something for them :’)

Also sorry I don’t post much, I’ve been taking breakd from all of my social media because of all the negativity :(

*talking about the new coffee machine*

Sero: If Kaminari breaks it, he’ll pay for a new one

Sero: If Bakugou breaks it, Kirishima will pay for a new one

Bakugou: Fine by me

I dropped my muffin, and fell in… Love?

It’s not long after the horrible crash that was Shouto and Izu’s relationship broke apart that Sero approaches Shouto. Says to give him a chance, says that Roki did, that all he wants is for Shouto to give him one too. It’s genuine, at the very least, not another sick joke meant to summon memories Shouto just wants to leave be. It’s not a joke, not with the way Sero looks at him: charmed and wooed, eyes focusing on him like he’s the love of his life. Maybe Sero actually thinks Shouto’s the love of his life.

How can he be so sure Sero hasn’t fallen for someone who isn’t there anymore? How can he be sure everyone isn’t just seeing Roki and Todo when he talks to them?

He can’t turn back around.

Izuku: I… i have glass bones?

Iida: YOU’RE MADE OF METAL!! 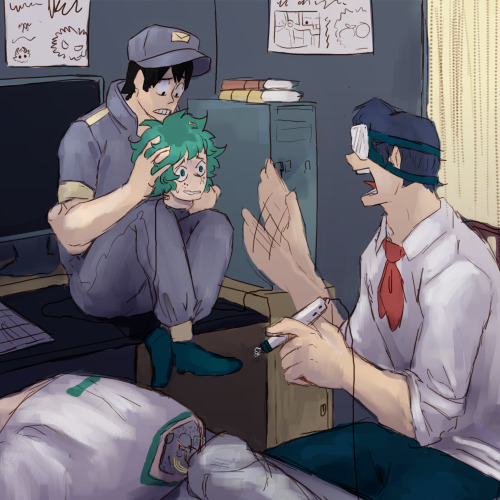 #Androids au, #Sero Hanta, #midoriya izuku, #Iida Tenya, #bnha, #my hero academia, #a sketchy drawing for yall, #normal art? on my blog? its more likely then you think
247 notes · See All
Next Page