And now, some cursed singing from Kermit to a barely-there impression of Plankton.

#plankton, #sheldon j. plankton, #spongebob squarepants, #the spongebob movie, #nickolodeon, #sbsp, #sheldon plankton, #karen, #king neptune, #princess mindy, #gif, #gif set, #flashing lights tw, #my gifs*, #planktons animation in this movie was phenomenal, #hes such a gremlin and there are so many more gifs i'd put into this post, #a little too much green compared to the show tho (i messed with that here)
334 notes · See All
cloudys-tickle-fluffText

This Is No Laughing Matter

Lee!Plankton anon here. Here’s the fanfic. Hope you like it.

It was just another day at the Chum Bucket. Plankton sat in the middle of his lab, surrounded by blueprints and plots to snatch the Krabby Patty Secret Formula. He was looking at them all, muttering incoherent things to himself and giggling loudly like a madman. He may have failed multiple times, sure, but he wasn’t one to back down. One person knew that for sure: His wife: Karen.

Karen usually had more patience, but for some reason today, she didn’t have her usual patience. She glared at him from her position in the corner of the lab. The muttering and the insane giggles were starting to get under her skin. She had to quiet him, but how? The purple-haired woman started to ponder on ways to do such a feat.

Then, an idea struck in her head. The idea was a bit childish, Karen admitted, but right now, it would do. She sneaked up behind her husband and snatched him from the blueprints pile, him yelping with surprise. She then pinned him to the wall, his hands above his head with one hand.

“Oh nothing, big guy,” Karen smirked at her husband’s nervousness, “just this!”

She then dug her fingers on her free hand into Plankton’s stomach, eliciting a squeal and boyish giggles from the aforementioned villain.

“K-Karen!” He managed within the oncoming giggles, wiggling his arms in a futile attempt to free himself. “W-What’s the meanihihihing of thihihihis?! This is no laughing matter!!”

“Oh really~?” The wife retorted playfully back, an impish grin plastered on her face, “Well, if this is no laughing matter, then why are you laughing? That doesn’t seem right, now does it~?”

Karen’s grin soon melted into an adoring smile as she watched the green-haired husband of her struggle while practically trying to speak words that were doused in giggles.

However, Karen was starting to get bored with just getting his one spot. She knew if his worse spot, one that if he was ever tickled there, he’d virtually do anything for it to stop: His neck.

The purple-haired woman grinned impishly once more as she stopped attacking his stomach, Plankton panting to regain air, undid his collar, and held her hand right above the spot. Plankton still giggled wildly, as he was now on the verge of laughter, Karen chuckling.

“What~?” She questioned him, slowly moving her hand to his neck, “I’m not doing anything……yet~”

“Y-You wihihihihilll though!!” He riposted through giggles.

“I think I better call on reinforcements.” She then lowered her free hand into her bag and pulled out a feather, one Plankton dreaded. She then slowly moved it towards his neck, the villain struggling a lot more frantically now.

“Karen yes~” Karen chuckled and started to dance the feather all over the sensitive flesh on her husband’s neck.

It didn’t take long for her to get a reaction, just one or two seconds if she had to guess: Wild cackling and barely comprehensible pleading from Plankton himself.

“OKAY OKAY KAREN!!” He managed without his words being drowned in unbridled laughter, "WHAT IS IT YOU WANT?!!“

"So glad you asked, big guy,” She smirked, twirling the feather on the crook of his neck, “I want you to quit your scheming, and spend some time with me.”

“I WILL!!! I WILL!!! JUST STOP PLEASE!!!” Plankton replied before his words were drowned in laughter.

Karen stopped her assault, unpinning him from the wall. He then immediately latched himself onto Karen, pinning her to the floor with a wild grin on his face, despite his panting. The purple-haired woman’s cheeks were soon coated with a dark red blush.

“The lion is hungry, Karen~” He purred, “For revenge~” He kissed her deeply, surprising her. She kissed back nonetheless…..that is, until she had to pull away due to her own girly giggles pouring from her mouth as Sheldon exacted his revenge. The blueprints and schemes were soon a distance memory.

it was so well written and cute and aaaaaaaaaahshdjsjdjsjd!!!!!!!!!!!! if it’s okay with you, could i draw some doodles based on thsi fic?(ill link it when i post em if its ok) bc i absolutely love it!!!!!! thank you for submittin!!!!!!!

#Spongebob Squarepants The Musical, #Tickle Fic, #Sheldon J. Plankton, #Karen, #Lee!Plankton, #Ler!Karen, #i audibly gasped when karen called him big guy bc lowkey those lines are what radiated the most Lee Vibes™ from Planktonsjfjsjdjjd, #I CANNOT THANK YOU ENOUGH BY THE WYAT HIS IS SO PERFECT, #submission
10 notes · See All
gh0stly-tearsText

look, lava’s pretty hot, let’s give into our fear–
DISASTER’S on it’s way, that means we can’t spend no more time in here!

the spongebob musical: live on stage! musical numbers: when the going gets tough.

“Sandy and Karen combine minds to help get Sandy out of serious trouble from an experiment.”

“Well, shoot,” Said Sandy as she wiped some dust off of her gloves and boots. “That was closer than a bull at a glue convention!” To really get a look at the damage she was talking about, the squirrel had to take a few large steps back.

Her beloved Tree no longer standing. A pile of splintered wood, broken belongings, and branches. She had been standing in the bathroom just moments before she heard an unfamiliar creaking. Upon investigating she found a Nematode, she put two and two together and high-tailed it out of her house. The foundations had been weakened, and chose that moment to completely give out.

Unharmed by the wreckage, her scientific equipment stands still running the tests she’d programmed it to run on some new fauna she’d come across recently. The specimen must have been housing a family of Nematodes. Too blinded by the prospect of a meal to realize they’d dry out without Ocean water, hopping out of the experiment tank, and doing their business before quietly passing away.

Sandy can’t feel too sympathetic, they destroyed her house!

how i spent my morning 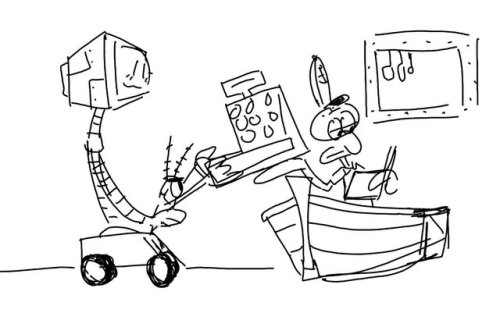 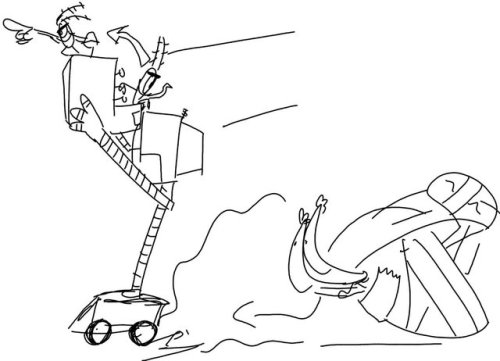 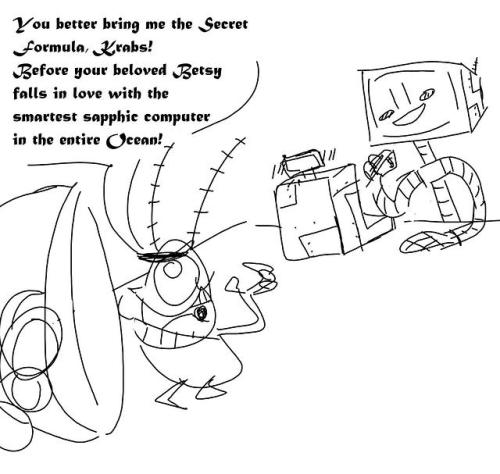 Spongebob and Plankton go shopping at Sunken Treasure™. Plankton gets mistaken for a mean baby.

Sheldon J. Plankton from SpongeBob SquarePants is a robot fucker! 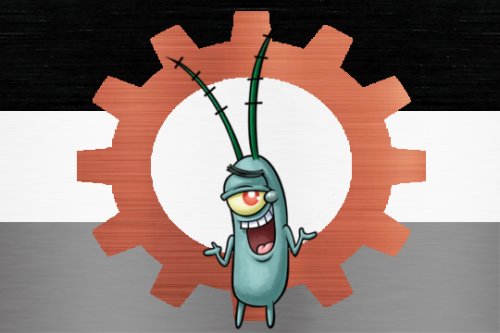 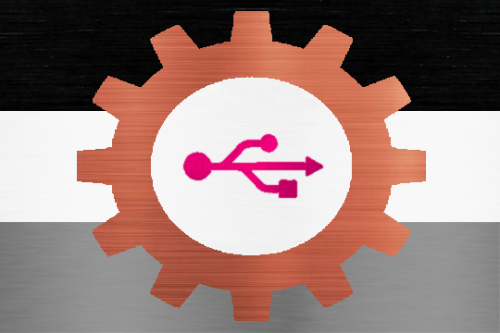 Plankton: this is so sad

Plankton: karen, play when the going gets tough

#spongebob, #spongebob on broadway, #plankton, #sheldon j. plankton, #i've been thinking about this all day
11 notes · See All
horroraceman93Video

Krabs: Welcome to the Apocalypse, Mr. Squidward. I hope you like leather.

In When The Going Gets Tough

a little bit of my fave evil married couple, because i haven’t drawn them in a while. always trying to be better! (me, not them. i think they’ll be evil forever, but that’s okay. evil LOVE.) 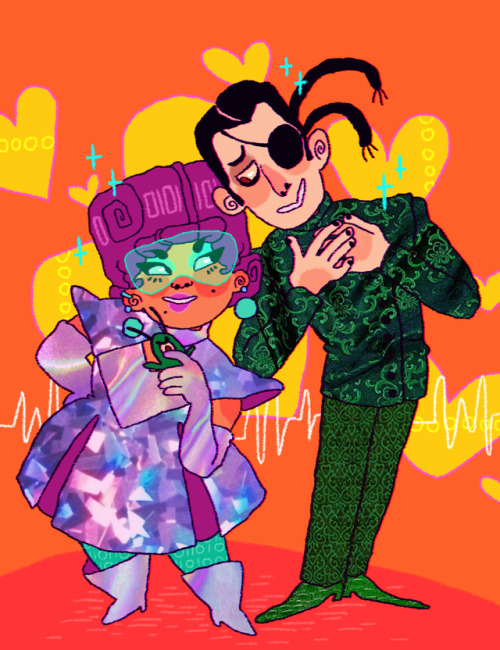 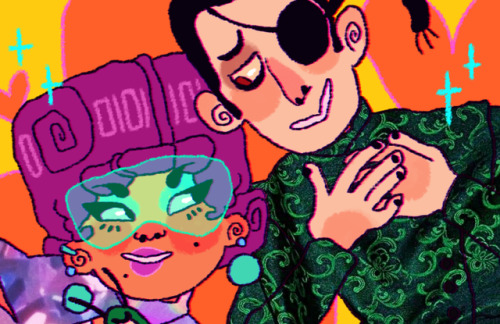 anonymous: ah i just wanted to say!!! all of your art of plankton and/or karen means a lot to me,,,, ive been going through kinda a rough time but looking at your stuff just cheers me up!! i absolutely Cling to their interactions for emotional support so its really great seeing people care about their relationship so genuinely, and the fact that your art is so bright and so clearly filled w/ effort really affirms that you do!! gosh im rambling but just like… thank you? so much? for unabashedly loving em?

hi there! sorry i didn’t respond earlier - i hope you don’t mind me publishing this, but your message got me all a-flutter and i felt like i just had to doodle you a lil something extra. i’m so happy i can be of some little help to you! and you are so welcome. drawing these two really makes me happy too, i think they’re one of the funniest parts of the musical, but they’re a portrayal that shows maybe sheldon and karen do love each other really!