All finished! A donghua redraw in colored pencil. The coloring didn’t come out as well as I hoped, I wish I’d drawn it on different paper, watercolor would have worked better, and I’m not great with backgrounds. I still like it though.

i love them so muchhh🤧🤧

Shen Qingqiu transmigrates and has just a bang-up time trying to avoid people avenging themselves on him. Thanks for helping out, System~ _(:3」∠)_

And here’s the first chapter of the multi-chapter fanfic that will be updated every sunday and wednesday!

who is even talking about being a teacher?? but also still no lmao considering he isnt even a cultivator hes basically playing a video game hes familiar with in first person

#this is a hilarious take. and you think shen yuan deserved it for what? sitting on his ass his whole life then migrating into a novel?, #i have to laugh, #svsss, #anon, #answered, #shen qingqiu, #shen jiu
3 notes · See All
hisohisoAnswer

LMAO GIRL WHO EVEN TOLD YOU THAT … NO… Shen Qingqiu is literally Shen Jiu’s courtesy name, they get those after they reach a certain age 😩

the book is.. literally about Shen Yuan transmigrating to SQQ’s body and assuming his identity what are you talking about “did not steal his name” im 😭😭😭😭 he literally is IN his body its not just the name he “stole” 😭😭😭😭😭😭

#for the lack of a better word. also this is about fandom pretending sqq is sy’s name??? like it is NOT, #shen qingqiu, #shen jiu, #shen yuan, #svsss, #anon, #answered
4 notes · See All
stebeeeAnswer

Featuring karaoke-loving Shang Qinghua who gets a bit too drunk at a Cang Qiong mountain gathering, and he goes all out.

Or when Mobei Jun wonders why Shang Qinghua is singing about another man called Liang Shan Bo.

Sometimes, he thinks about his old life before he ever had the misfortune of landing in a world of his own creation, with an annoying gaming AI system of sorts hounding his every move (in the beginning) or turning up at the most inopportune times just when he thinks it’s finally gone and left him alone (more recently).

Shang Qinghua remembers not having many friends when he was still Shang Qinghua, when ‘向天打飞机 Airplane Shooting Towards the Sky’ was still merely his writing Weibo account moniker and when he had millions of people looking up to him for his crucial contributions in writing this amazing story about his son Luo Binghe and the way he overcame all odds to become a success with a harem of gorgeous women at his feet (damn you, Peerless Cucumber bro!).

Back in those days, he lived off cup noodles and instant coffee. If he didn’t have to leave the house, Shang Qinghua would simply curl up in front of his laptop, either writing for his novel or watching shows (clears his throat) - actual shows! Chinese period dramas were his favourite, where a skilled and intelligent consort in the harem would outwit all the other women to be with her one true love, the Emperor, who falls irrevocably in love with her.

And when he got bored, he switched from the laptop to his television to engage in his second most favourite hobby - Chinese karaoke. Going out to a karaoke bar would require some level of socializing, and also a few friends so he gets more bang out of his buck from what he pays for the room, but at home?

With advanced technology and a tiny ass microphone in either shining gold or silver, Shang Qinghua’s home entertainment system was his very own personal karaoke room, His tiny mic even had that echo-y effect on.

Shang Qinghua has a thing for classic Chinese songs - ‘The New Butterfly Dream’, ‘Liang Shan Bo and Juliet’, The Moon Represents My Heart‘ - and contemporary karaoke must-haves, like Wang Fei. For an embarrassing few days, the Chinese version of Baby Shark was a veritable earworm as well.

After transmigrating into his own story set in ancient times, where he lives without technology, Shang Qinghua would be lying if he said he didn’t miss the Internet. Laptops would be incredibly handy, and so would switches for lights, definitely indoor plumbing for toilets, and induction stoves. Phones too, that would be nice, rather than having to ‘send word’ with letters.

Of course, there is no karaoke bar or machine for him.

Not all is bad though. At least he transmigrated to Shang Qinghua in this world as a baby, so it’s not as if he was surviving on Internet and technology one day and left to do everything manually the next day since someone was always taking care of him. Peerless Cucumber bro, of course, wasn’t as lucky, but the man has definitely taken to this world (and his son!!) like a fish to water.

And as for himself, Shang Qinghua does not need to envy Shen Qingqiu and Luo Binghe either, because somehow, he has gotten the man of his dreams too, even if said man was a little cruel and rude to him in the beginning.

He has the love of his life (coughs coughs) and they’re stuck in this world for the rest of his life. What more is there to want? Not to mention how his cup of instant noodles betrayed him at the last moment, resulting in his death! It is slightly safer, ironically, to be in this world instead.

All is good except… well…

Shen Qingqiu marvels at the sight before him, torn between wanting to step in to stop Shang Qinghua, or watch this farce unfold.

He sometimes forgets where he, or where Shang Qinghua, who has been in this world longer than he, came from. They don’t always talk about the past when they meet, and aside from the occasional meetups, Shen Yuan is a part of him that doesn’t surface, not when he is with Luo Binghe.

Shang Qinghua, on the other hand, grew up here, and aside from referring to Shen Qingqiu by his Weibo account name, he seems otherwise well-adjusted, no hint of modern online writer Shang Qinghua in sight. It doesn’t feel as if he misses their original world either.

This evening, however, memories of modern times slap him in the face, quite literally.

“Shizun!” Luo Binghe calls, frantic, tugging him back into his embrace out of Shang Qinghua’s way. Once Shen Qingqiu is safe in his arms, his eyes narrow at the bumbling, drunk idiot causing a scene in the dinner hall, “Shang Qinghua…”

Shang Qinghua stops where he is, and then before any one can stop him, he picks up a pair of chopsticks, brings it to his mouth, and begins bellowing his way through-

Shen Qingqui: AND I WOULD DO ANYTHING FOR LOOOOOVE

Shen Qingqui: BUT I WONT DO THAAAAT

Summery: In Which Shang Qinghua Has Had Enough.

Warning: Mentions of crappy parents, hinted neglect, and cursing. This is very much written with an anger, hope people enjoy it tho~

It happens one day; a seemingly ordinary day, the sun is shining upon the mountain range and the air is crisp.

Shen Qingqiu and Shang Qinghua are having a rather one sided conversation, when finally

i cant get over mxtx got rid of spiteful sadistic manipulative ass real sqq and put that fake blank boring one instead. you have three service tops in this and for what

Lmao his storyline is interesting but he’s super mild for sure. His reactions make so much sense though, most of his overindulgence towards SJ is due to the guilt complex, it sure is.. something.

As for being strict with him, maybe sj would think better of him, but he sure would be way more volatile and nasty lmao (interesting idea for an au though)

before and after xD 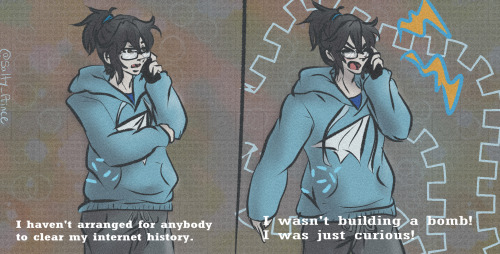 am i stupid for just now realizing that one of the differences between Bingmei and Bingge was that Shen Qingqiu returned Bingmei’s Guanyin pendant, thus restoring the sense of mercy and compassion that Bingge lost in his youth

Let it not be said that Shen Yuan didn’t know how to be an accomplished—arguably better—writer than Airplane Shooting Towards the Sky! A middle-aged author in his hubris, he’d unknowingly triggered his fate and had his consciousness whisked away into an unfathomable mystical world that he would later learn to be based on Proud Immortal Demon Way and his very own work-in-progress. When given the opportunity to customize his character’s stats and to design his one remaining Customizable Skill Slot, as a veteran reader of transmigration stories and their tropes, Shen Yuan demanded, “Grant me the protagonist’s halo of course!”

【This world’s Luo Binghe. From the original novel series.】

“…Hold on, I need some time to process this.”

(Little did Shen Yuan know that this world’s Luo Binghe is the same sadistic Heavenly Demon “Bing gē” who’d stumbled upon the alternate universe version of his “Shizun” enjoying marital bliss with “Bing mèi” in one of the released Extra short stories. It was also too bad that Shen Yuan, in his mortal form, resembled Shen Qingqiu by a good thirty-to-forty percent.)

(It’s a sort-of redemption fic. I think Bing gē deserves his own Shen Yuan. Some soulmates are just meant to be….)

HE GOT SO TALL🥺

Shang Qinghua: I have a plan.

Shen Qingqiu: Does the plan include me not dying?

Shang Qinghua: Bro, I said I have a plan not a miracle.

Hi, after some time I’m finally able to post another drawing!!

If you’re reading this, I’d want to kindly ask you to check my previous post! Please help me spread the word.