Do Bakugo and Shinsou get along? of course 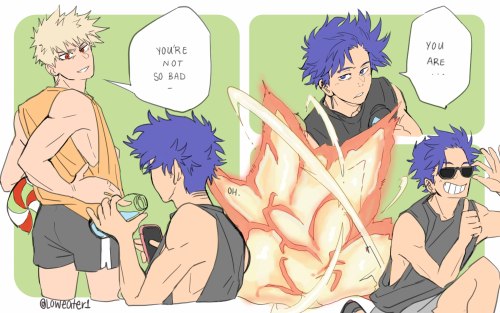 When their s/o has a bad day.

A/n:FINALLY thank you for the ask 🤧 I don’t think I got to many shinso asks ya know so I’m kinda exited / scared to use him. But all in all I hope you enjoy, drink plenty of water and have a nice day/night.

When he sees you come home with tear stained cheeks, he took a second to actually piece together what could be wrong. First he thought that you was just crying because of something little happened, which you would usually go to him about.

But when you didn’t, just standing there by the door sniffing loudly what’s when he noticed that your really upset.

♣︎he would hug you tightly, because he knows how much they mean to you. He knows that it’s what you need.

♣︎ he’s as helpful as he can be, biting his tongue because he knows how straightforward he can be and doesn’t want to accidentally hurt you feelings.

♣︎ he brings you everything you will need. A blanket maybe some snacks that you like- want a bath , no problem he’s gonna make you one and than you both can be in it together. He wants you to feel better at all cost. H reminds you that he IS going to be here for you always.

Your tears triggers his tears- he goes over to you trembling. Quickly holding your cheeks, his thumb whipping the stray tears. He asks you what happened and when you told him threw chocked sobs, he stopped trembling and smiled at you gently.

♣︎he knows how to take care of you when you get all sad. So when you have a rough day he will tell you to leave everything to him and you rest.

♣︎ lucky that you got him on his off day. He’s gentle with you making your favorite foods. Listening to your day and adding his two scents in every once in a while, letting you cuddle him.

When you came in he was slurping down on soba. I’m sorry but he’s probably the one who started out completely confused. He sit silently as you complained and talked about your day went. tha does the following…

♣︎offers you soba, you may have gotten you addicted to it as well.

♣︎ let’s you sit on his lap, telling you that your home now and that your day can get better.

♣︎ try’s his best to comfort you but fails at it badly which makes you laugh and hug onto him. 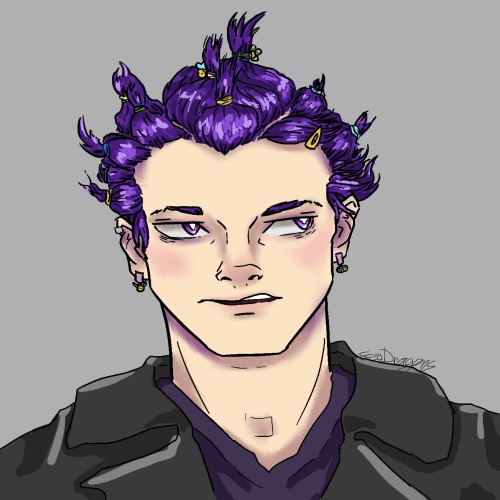 Summary: “Well, it seems a bit funny…” Shinsou’s drawling voice trailed off, becoming slightly sharper by the word, “…that the three students with the most villainous quirks were set up for this.”
Tokoyami jerked upright. “You do not mean that-.”
“Oh he means it,” Bakugou growled out with narrowed eyes, “ pencil-ass set us up to play his goddamn villains because we’re good at it.”

Or:
Aizawa assigned Tokoyami, Bakugou, and Shinsou to play as the villains in the end year exam against the rest of the class.
Aizawa accounted for Bakugou’s rage, Shinsou’s asshole tendencies, and Tokoyami’s self-esteem.
Aizawa did not account for the pure, unholy wrath, of three very petty teenagers who like to make a point.

You know when Shinsou uses his quirk, if his opponents experiences enough pain they’ll snap out of it?

Imagine him brainwashing someone and the suddenly they aren’t controlled anymore. And he’s staring dumbfounded like:

Shinsou: how did you do that?

And they just go:

Seriously, that could be a variable Shinsou has to take into account when fighting someone.

bring your dad to school day at UA. Yagi comes with Midoriya and Mic comes with Shinsou, Aizawa would have come with Shinsou but he’s to busy being the dad of all kids whos dad couldn’t/refused to come. Also Todoroki abandoned Endeavor somewhere and is following Yagi and deku now

Zoey: Hey, Dream Boy! You remember the promise you made me? Or did I only have that conversation in a dream….?

Zoey: The promise where if I ever get controlled by a villain and start attacking you, that you’ll let your love for me die in order to make it easier for you beat the sh*t out of me in order to tire me out before sending me to jail or even killing me, if needed.

Shinsou: Wait….you want me to let my love for you die in order to make it easier for me to hurt or kill you?

Zoey: If I’m being controlled by someone who’s forcing me to hurt innocent people or anyone from UA, yes. When I say from UA, that includes you, Dad and Mic, so I didn’t feel the need to clarify before, but now I feel like clarification is required so you don’t feel left out or something.

Shinsou: *Isn’t exactly sure what to say to that*

Shinsou: Uhm….If things where reversed and you had to kill your love for me in order to make it easier to hurt or kill me, would you be able to do it?

Zoey: Of course not, I’m an emotionally weak b*tch who makes plans for suicide when I think of the possibility of someone I care deeply about being the UA traitor. I clearly wouldn’t be able to do it. But you’re unbelievably stronger than me in literally every way, so you can probably manage to do it.

Zoey: *Is about to walk away before turning back to him* Btw; I’m sorry if that was insulting to you, but class is about to start, so if it was upsetting to you, I need you to tell me at lunch so we can talk it out, because if you feel insulted, I’m gonna need you to know that I’m sorry, but I won’t be able to do so properly until you tell me how you feel and I have enough time to properly apologize, but Dad is gonna kill me if I’m late for class, so we have to talk at lunch! Love you!

Shinsou: ……Am I being tested by my girlfriend or something?

They definitely had a talk during lunch.

And Shinsou asked if Aizawa was in on any test she was putting him through or anything.

He was not in on anything :/

He was not being tested.

She said what she meant and she meant what she said, nothing being hidden.

She just doesn’t want her existence to get in anybody’s way of their hero work.

Kind of like how she thinks that if she’s ever kidnapped or anything, they shouldn’t attempt to rescue her because she doesn’t want the rescue mission to end with anyone being dead?

And she still feels like she isn’t worth anything, like she’s the most useless, worthless student in UA (or the world), so they shouldn’t put their lives on the line for her?

This girl just can’t actually keep a decent view of her worth as a human, can she?

Even if she appears to think she has worth, she doesn’t actually feel that way and just puts on an act most of the time.

It’s only in situations like this where she starts ‘crumbling’ a little on the inside where she’ll openly let things slip.

She meant what she said and wasn’t testing him, but either way, another therapy session should probably be scheduled.

Shinsou looking like an absolute badass in the trailer. You’re doing amazing sweetie!