This Following Animation is positively for the ones who got annoyed by the loud neighbors. 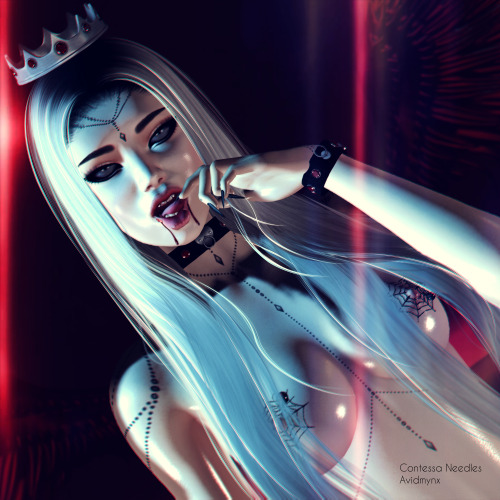 **FREE** to download on November 25th, on Amazon Kindle!

Shorts That Grab Attention! Is a book of little stories written for readers who appreciate wry humour.

Topics include everything from cavorting neighbours and the debacle of speed dating to movie-theatre etiquette and fatphobia. Robert S. Daley recounts his travels around the world and his battle with mental illness in this gem of a book, which you’ll be glad you’ve unearthed. 25% of the royalties will be donated to MIND, the mental health charity.

People documenting their time at a weekend retreat is nothing new these days. The appeal for most is being about to post about said retreat on social media, rather than actually experiencing whatever the purpose behind the excursion. This films touches on all of the but adds humor, clever writing, and a satisfying ending.

Took damn long enough for the big fancy courts to declare same-sex marriage legal. Too damn long. But better late than never–or whatever people say when governments take too long to figure out simple shit like ‘civil rights’.

I tried not to scoff, but sometimes I am tired.

this plays in my head at least once a day, might as well listen to the real thing.

Just some alignment memes for the cold, cold winter 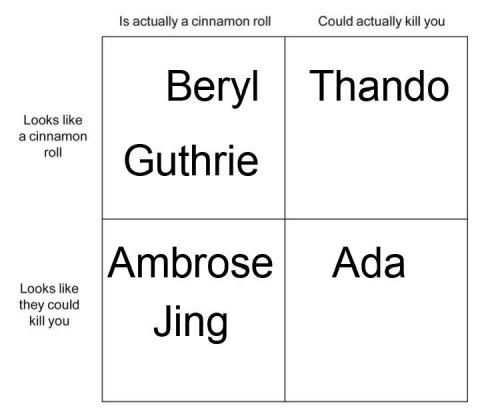 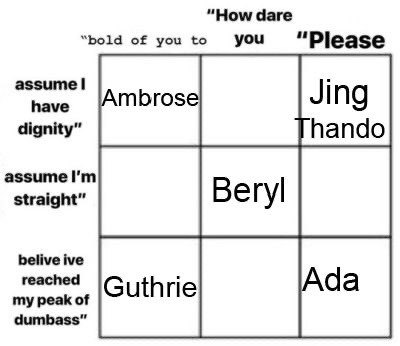 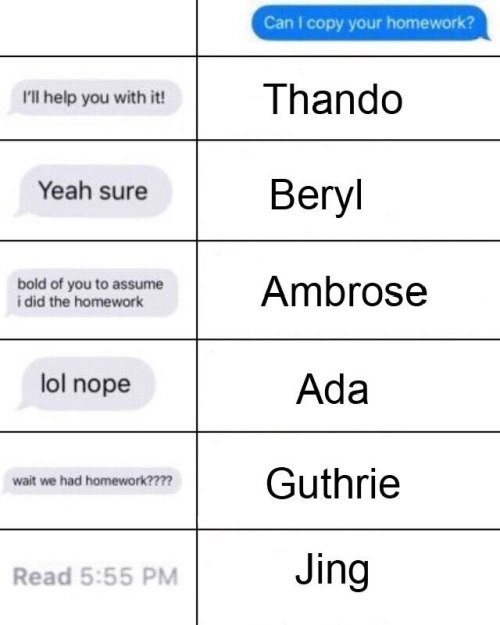 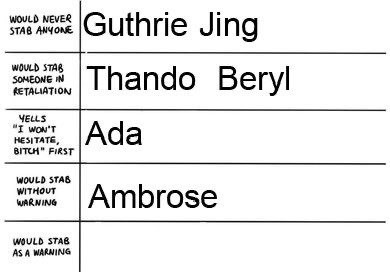 She adjusts her position on the couch. She couldn’t stop thinking about it. She wanted to approach the situation with no subtlety, but there was a restraint within her that kept her from throwing herself over him and mauling him with her kisses and tongue that she would hope to lead elsewhere. He had expressed that he wasn’t one for subtlety, and yet here she was—beside him and questioning how best to approach him.

Her heart is beating fast, as undoubtedly his is beating calm as they stare at a movie that neither of them are actually interested in. He had promised to let her come to him. It’s was unbelievably frustrating and yet liberating at the same time. His hands rests on her thigh as he absentmindedly strokes the top of her thigh and she cannot handle it. She grasps his hand in hers and moves it, holding his hand as they watch the movie. She was already thinking naughty thoughts and his gently brushing fingertips were not saving her any inner-frustration.

She moves his hand again shortly and they grasp hands, forearm-to-forearm. She strokes the webbing between his thumb and index finger and contemplates how to pounce him without her actions coming across as wrong. She lets the stroking of her thumb take her away as she tries not to think about how  all she can think about is straddling him. She laughs and he glances at her a moment. She has lost interest in the movie so long ago, she has no idea if her laugh was in time to the movie’s humour or if she just looked strange. She occasionally paid enough attention to the film to make a quip here and there, but now she has nothing to say. It was a movie, you were supposed to watch, not say anything anyway.

She doesn’t care. All she wants… She leans against his shoulder and tries to focus on the movie. It wasn’t working. She moves again, lifting his arm and moving in closer to snuggle next to him while placing his arm around her. Just run your hand down his cock, her mind demands and she smirks in the direction of the movie, safe from his view in their current position. There’s your ‘no subtlety’. Another ten minutes go by in this tortuous position. She, stroking the back of his hand and his arm and snuggling closer, but nothing else comes to her except how much she wants to… Do things. She smiles to the television screen and after three more minutes of constraint, she moves his arm off and gets indignant.

“Yeah, this isn’t working,” she says. “Move, Cher-bear,” she demands, shaking out the pillow her pup was sitting on beside Chase. “Thank you,” she says, half graciously-half grateful that the dog had moved fast.

She leans into Chase heavily and kisses him gently. It nowhere near mimicked her original feelings. She tries again and again, kissing him until she finds that she can’t find the right position. She makes a  aggravated sound and throws a leg across his hips. She settles down on his lap and smiles. She had found her spot.

She smiles and kisses him more thoroughly.

“I was going insane. I wanted to make a move and I couldn’t think of a way to do it. So I just kept moving,” she interrupts herself, dipping her face in and kissing him again. “And I was thinking about how to do it since we started the movie. But I was being all shy and stupid and then I lost,” she kisses him again, punctuating her need. “I lost it. I was just like fuck it.” She explains this and feels herself blush, but she’s already flushed, so he wouldn’t be able to tell.

He laughs genuinely, his hands cupping her face and kissing her back. She scowls,

“Don’t laugh at me!” she demands. He stops laughing and returns to kissing her. A few moments of hard breathing and a pause–

He reaches up and with very sure movements takes off his glasses. She bursts out laughing. He says nothing, but smiles as she falls into an uncontrollable fit of laughter. She can’t even kiss him now, she’s laughing so hard. “I’m sorry, I’m sorry,” she laughs heartily again. “It’s just, I know it’s on if you take your glasses off,” she says and falls into her laughter again burying her face into his neck. He laughs with her and they resume their kiss-fest.

It had just been a passing comment, one that shouldn’t have stood out against the noise around the four of them, the city life just passing by, and yet, it did.  Zevran didn’t know how you heard it, he barely heard it himself, but he knew as soon as you stopped in your tracks, Alistair almost crashing into you that you most definitely had.

The glare that you sent the two men, who seemed very unaware of the situation they’d just put themselves in, would’ve had lesser men scrambling for the hills.

“Do you want to say that to my face?”

I cried. Not once, but twice while reading this bad boy despite knowing the eventual fall of the two main characters.

I loved this book. It two parts Before I Fall and one part early 2000s movie The Gift. This book is so, so, so good. I literally started it one morning and finished it within the next few hours because I simply couldn’t put it down.

The story unravels across Manhattan and I think, because I live right across the waters of the city, it became just a tad bit more magical. In New York it is so easy to forget that the person next to you in line, or pushing you in the street is sometimes flesh and bone. That they have their own hopes and dreams, desires and dislikes. And, the book uses that part of the setting into its advantage.

I mean, oh my god, this book is such a stroke of genius. It dawns on the question of “what would you do if…?” and I think how both characters unravel this question is beautiful. You see, both characters are polar opposites and I love that juxtaposition. And, you can see where one thread falls and the other picks up between the switching of chapters and things.

For the story itself, it’s fast-paced. I really thought once I fell in love with both characters something would happen to one or the other every other chapter. That, I think, is what kept me reading. Because by the end, I wished that their mortality continued- I didn’t want them to die. I really didn’t. I was hoping in the grand scheme there was simply a … “sike!”

Of course, I do realize that literally everything about this book is foreshadowing. So, I couldn’t exactly tell myself I didn’t see anything coming which is both great and awful. But, jesus, this book really hit me like a freight train. The question of mortality is something I think most humans avoid because no one wants to state the obvious- that we all have to die sometime. And, this book is utterly in your face about it.

It compels you to question where would you go, who would you go with, would you remain solemn or try to live out that day like no other knowing it’ll be your last? Ugh. Guys, it’s a really really reallly good book. Silvera literally blew me away with this work that I’ll be keeping an eye out for his other works.

Just trust me, especially if you been here awhile, that you’re going to enjoy this work of literature!!!

Lockdown No Customers Barista Do What😂😂😂🤣🤣🤣

Safari
a final year project from students at Bournemouth University

The story of the bond that develops between a small child and a giraffe in a wonderfully depicted magical forest!

Lockdown No Customers Barista Do What

The first day you met her, it wasn’t like those sappy coming-of-age teen movies where the guy sees the girl and immediately falls in love with her. No. This is different, this is real.

Those hazel eyes have a different toll on you, thinking she was a bitch at first caused you to ignore her but over time you grew to like her more and more until the stage of best friends came upon your doorstep.

Staring at the stars at 2.09 am in the middle of the night at camp, swimming in the pool during the hot summer heat, beating the autumn wind by staying in and watching a movie, and hiding from the spring allergies together.

Spending another day together but today felt differently, your body restless and your thoughts never ending. You’ve always had your suspicions about your own feelings, unsure of what it feels like. The butterflies appearing everytime you think about her or even see her from far away. Time slows down for you but it goes by so fast, too fast that you realise that the for the past 5 hours you have been laughing.

Her taking a nap in your bed, exhausted after a full day of shopping, and doing tennis and dance the day before. Trying to take a nap next to her to energize your body, no matter what you do it doesn’t work. Switching to different positions, hugging a pillow, listening to music. Nothing worked. Writing about the mysterious feelings arising again in your personal diary hidden away in your cupboard, pretending to be a normal journal but is a keeper of secrets.

Writing about how she looked. The way her fringe fell on her face, her rosy cheeks plumping up thanks to the winter breeze, her eyelids shut making her look peaceful… and those lips, the lips you have imagined, the lips you thought you would one day kiss.

Pausing from these thoughts of yours, realising what you felt. Realising the meaning of the butterflies, the spark in your eye that your friends and family only see when she’s around, the little hidden dimple by the corner of your mouth showing up every once in a while when she makes you smile a certain way.

But no matter how you feel, you know you can’t.

And that’s the truth about her

Basically how the Fandom works

~ That one friend when they see you close with your crush ~