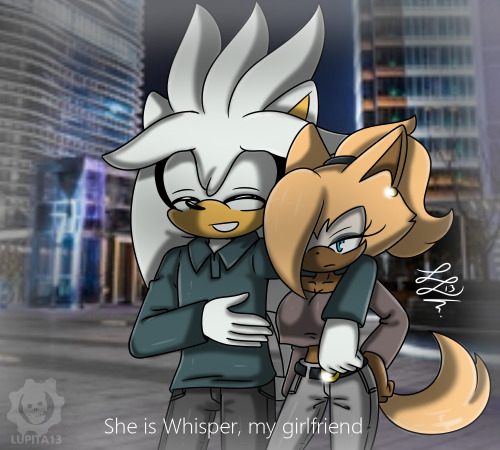 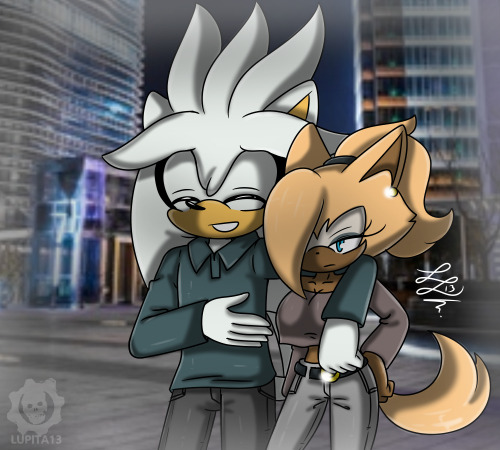 #Anonymous, #silver the hedgehog, #my stuff
22 notes · See All
smallpwbblesText

So I’m doing a thing (partially set after the events of ‘06) where Shadow, Sonic, and Silver all remember what had happened (though Shadow isn’t in this part).

With the future currently safe, Silver goes back to the past so he can 'meet’ Sonic on better terms. However, I’m not sure where they should meet. Should it be where they originally first met (and fought) or should it be outside the old castle (where the two of them teamed up)?

Made reference images for the future boys of my future au. 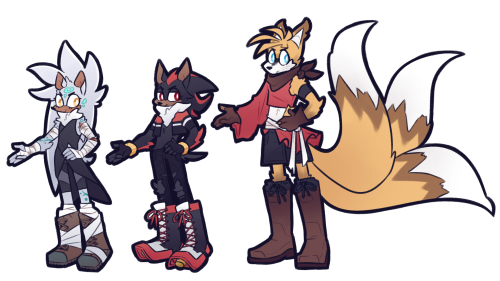 Both are good characters with cool abilities that were done dirty because the stories they were introduced in were unfortunately not as good as their predecessors.

#I should also mention that stone ocean isn’t anywhere NEAR as bas as 06, #stone ocean was just underwhelming with a depressing ending, #06 was a crime against nature, #jojo’s bizarre adventure, #jojo, #jjba, #stone ocean, #jojo part 6, #jolyne cujoh, #sonic, #sonic the hedgehog, #sonic 06, #silver the hedgehog
3 notes · See All
literalrpgPhoto 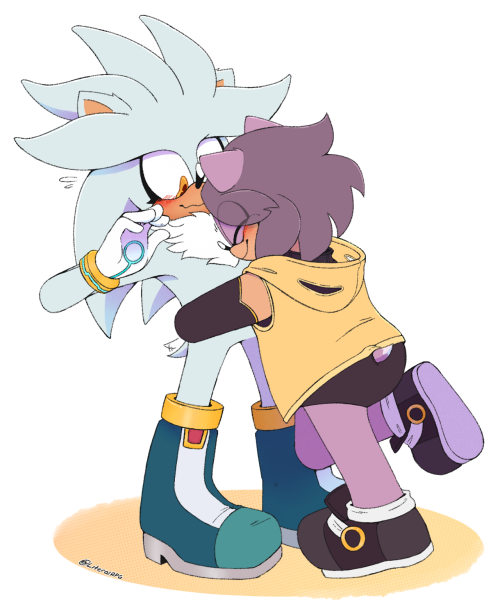 The final addition of our Sonic Sticker store is out with four new stickers: Rouge, Mighty, Serious Tails and Tails and Amy!! 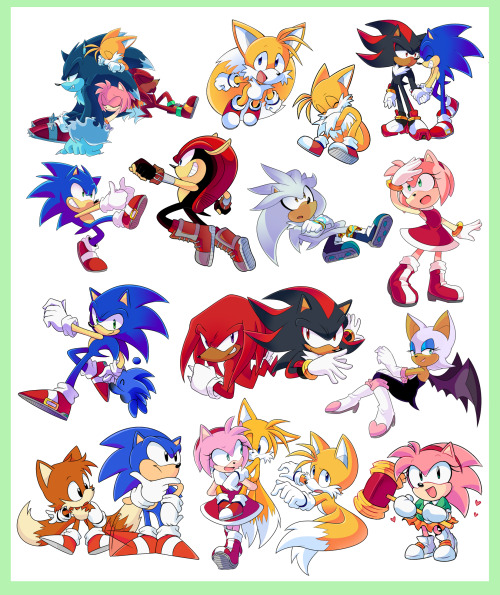 Forgot to put this up yesterday, but here’s Madelief in an ace flag themed cap and tassel since I graduated last Friday 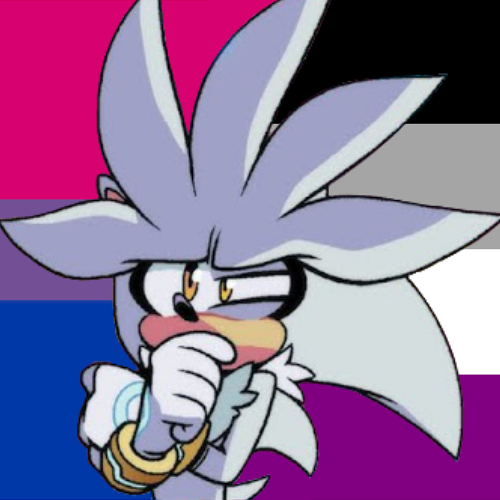 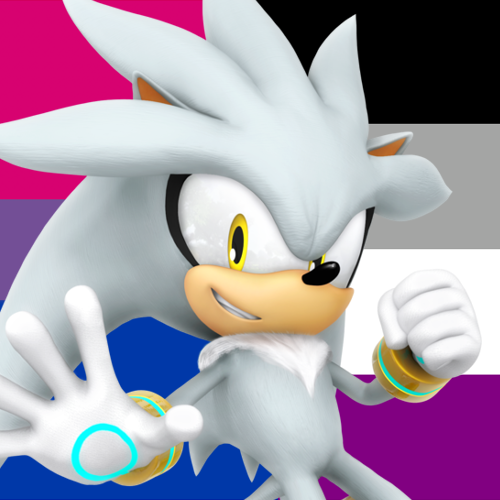 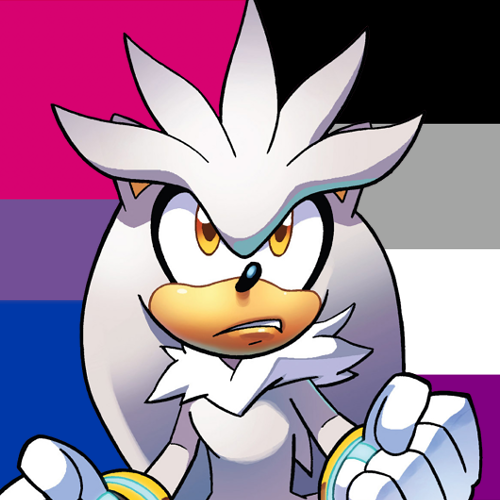 #Silver the Hedgehog, #shut up jaime
6 notes · See All
asavtPhoto

Crossover fever!
Aloha often gets Silver to different shops, to get him some style so he has something else to wear once he gets back to his own time 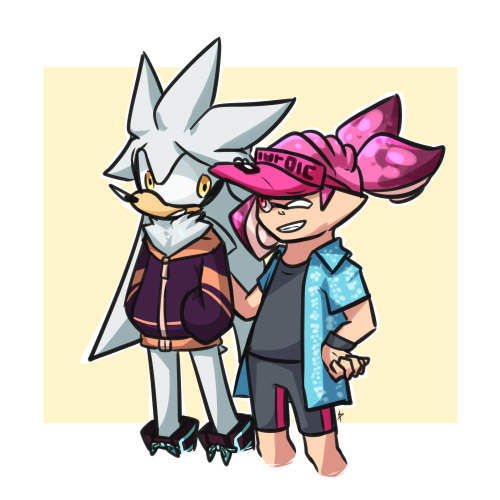 Yes, I am still learning how to draw.

Mini Fanfic #436: Most Adorable in the Relationship (Sonic)

Silver: (Watches T.V. with Both Espio and Blaze Sitting Next to Him) You know, I always wonder how the show would portray their version of the Future. (Smiles Brightly and a Bit Excitedly) I bet it’ll be pretty amazing all around.

And with that, Espio and Blaze starts Blushing Heavily and turns away from their boyfriend’s adorable smile.

Silver: (Very Confused by His Boyfriend and Girlfriend’s Sudden Actions) Uhh….Are you guys alright? Why are you blushing like crazy?

Espio’s: (Took Deep Breath) Silver. Please try not to take this the wrong way but-

Blaze: Why are so Frickin’ Adorable?!~

Espio: Well for one, your curiosity for almost everything is one of the key factors of our case.

Blaze: Plus, that smile…..that cute, innocent smile is too precious for this world that I just can’t!!

Espio: Neither can I…

Silver: (Blushes Even More) T-This is ridiculous, you guys! I’m from the Future! I-I can’t be cute!! If anything….(Points at Espio) Espio’s the cute one in the Relationship!!

Silver: You heard me, you Precious Chameleon!! You change colors every single time we kiss you!!!

Blaze: I have to agree with Silver on this one, Espio. (Giggles Softly) It is very amusing to see you flustered like that~

Espio: T-This is absurd!! Just because I may have changed colors because of both of your affections, more often, doesn’t automatically makes me adora-

Silver and Blaze Kiss Espio on both of cheeks at the same time……Which cause the ninja chameleon to instantly change into a different color.

Espio: (Clearly Flustered) Why must you keep doing this me?!

Silver: (Smiles Brightly) Just to prove our point across~

Blaze: (Smiles a bit Teasingly) It’s also because we love you very much~

Espio: (Crosses His Arm While Looking Away and Reverting Back to his Original Color) Love you too…..

Blaze: (Sighs Satisfyingly as She Got Up From the Sofa) Well. It seems like my two handsome boys are more adorable than I thought.

Silver: Hey, wait a minute! What about you, Blaze?

Espio: Yeah….. (Raises His Eyebrow At Blaze) Who’s to say you’re not one as well?

Blaze: (‘Scoffs’) That’s clearly impossible. I can never be labeled as “Cute”. Everyone knows how serious I can be.

Blaze: Yes it is. Now, if you two cuties would excuse me, I’m going to get us some more snacks. (Blows Kisses Towards Both of her Boyfriends) Be right back~ (Walk Towards the Kitchen)

Espio: (Facepalms While Sighing) At this rate, she’ll never let us live it down….

Silver: Well…..There is the way we can beat her in her own game.

Espio’s: Honestly, I’m welcome to any suggestions you got at this place, Silver.

Silver starts whispering the plan to Espio before Blaze comes back with snacks.

Blaze: (Stares Down at her Boyfriends With a Teasing Smile) So~ Did my two cutie pies missed me already?~

Silver: Oh don’t mind us. (Starts Smirking Teasingly Towards Blaze as Well) We were just having a agreement that you, in fact, are more adorable than both of us combined.

Blaze: ('Sigh’) Honestlyy. I already told you two before that it’s not the case. Are you two actively trying to deny the fact you’re cuties in our relationship?

Silver: I dunno, Blaze…..Are you trying to deny the fact?

Blaze: Okay. Seriously. What kind of angle are you two getting at here?

Espio: Oh it’s nothing really. It’s just that Silver and I has come to the term that you might be the most cutest Kitty Cat we ever had the pleasure of meeting.

Blaze: (Eyes Widened and Immediately Starts Blushing) W-W-What did you say?! What did you just call me?!

Silver: You heard the man, 'hon. You may think we’re cute, but in reality, you’re the most adorable kitty in the whole wide world. And that’s a fact~ (Winked at Blaze)

Blaze: (Blushes Brightly Red While Growling (Adorably)) I AM NOT AN ADORABLE KITTY CATTTT!!!~

The trio turns to see Vector and Vanilla standing behind Blaze.

Vanilla: (Gets a Bit Worried) Is everything okay in here?

Espio: ('Sigh’) Yes…..We apologize for causing a ruckus. We were just having a dispute of sorts.

Silver: We was trying to which one of us is more adorable in the relationship.

Vanilla: Oh my. Is that all, my dears? (Giggles Softly) We could’ve given you all the answer from the get go.

Vector: Yeah. And the answer’s all of you.

Vector: Yep. Each and everyone of you three are adorable in your own right. Like, for instance, Silver, you’re always so interested in learn stuff that it practically made you a Precious Bean.

Vector: (Turns to Blaze) Blaze, you’d always huffing, puffing, and blushing every time someone calls you a “Cute Kitty Cat”.

Blaze: (Blushes While Pouting) That is not true!- (Starting to Realize What She’s Doing) Oh my gosh. I’m starting to see your point now, detective.

Vector: Yep. (Turns to Espio) And Espio………Ohohooo…..Espio. I don’t even know where to begin with you, partner.

Espio: (Looks Away From Vector) I don’t know what you’re talking about here.

Vector: (Raised an Eyebrow at Espio with a Smirk on his Face) Ya don’t know, huh? ('Heh’) Well….I guess I could start with the fact that you called my girlfriend your “mom”.

Blaze: (Eyes Widened in Shocked) Oh my goodness! Espio, is that true?

Espio: (Slowly Turns to see Vanilla Crouching Down to Him with a Sweet Smile on Her Face) It’s okay, sweetie. I promise it’s nothing to be embarrssed about. (Opens Her Arms Wide Open to Espio) Okay?

Vanilla: (Giggles Softly to How Adorable Espio Truly Is as She Hugs Him Close)

Vector: (Crosses His Arms with a Satisfied Smile) I rest my case.

Vanilla: That you have. (Gives the Couple a Motherly Scolding) Now no more fighting from you three, okay?

Vector: Good. Now if you kids would excuse us…..(Takes Vanilla’s Hand in a Gentlemen Like Fashion) We have a movie to finish watching in our room.

Blaze: Well…..(Takes a Seat at the Sofa with her two boys) I feel really silly now….

Silver: I can’t believe we spent all this thing time fighting on who’s cuter when the answer is right in front of us this entire time…..

Blaze: I thing it’s high time we all make a compromise. Let’s agree that all of us are adorable in this relationship together. How does that sound?

Espio’s: (Smiles Softly) I can agree to that. (Gently Hold his Lovers’ Hands) I really do love you two so much.

Both Silver and Blaze’s Hearts Begins to Melt as they each give their Chameleon Boyfriend a kiss on both of his cheeks once more and rest their heads onto his shoulder. Causing him to change into a different color own more.

Silver: (Snuggling Close to Espio on his side) Soooo Cute~

Espio: (Smiles Relaxingly) Yes well….I suppose It’s my nature to let it happen. Since you two give me so much life and whatnot.

#sonic series, #espio the chameleon, #blaze the cat, #silver the hedgehog, #vector the crocodile, #vanilla the rabbit, #espio x silver x blaze, #lots and lots of fluff here, #vanilla is best mom, #vector is best detective, #humor, #cute romance, #cuddling & snuggling, #espio has already accept the fact the vanilla has become the perfect mother figure to him, #have to edited it again to make it perfect. sorry about that
4 notes · See All
theflashdriverText

Blaze: Silver, how could you spend our money like this.

Silver, putting tiny raincoats on ducklings: They live outside, Blaze, they need this.

Happy birthday to my friend @bluefoxproductions !!!

one last post for the day i got an animation idea and this is the audio- so if i don’t post for a little bit it’s because i’m making a sonilver animation :,)