So I told my wife that I wish I can eat sisig. With all the restaurants closed, there is no way I could eat one. So she cooked one for me! Me so lucky! 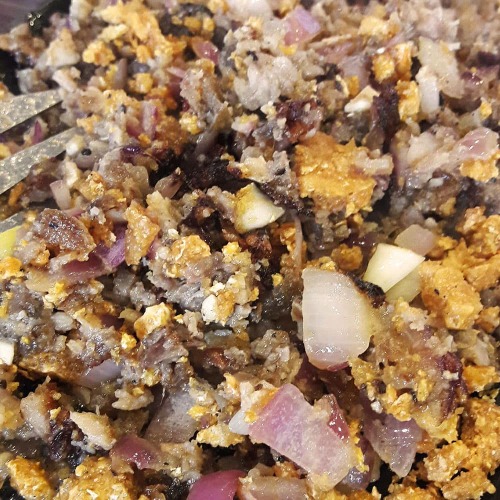 Day 10: In Manila To Catch Up With An Old Friend

Today, I woke up late but early enough to figure out my flight home before my lunch meeting with Andrea. After washing up and making a call to an EVA Air agent who confirmed that I was good to go on my originally booked flight, I was finally ready. Luckily for me, I didn’t have to hail a Grab taxi; instead, Andrea had instructed her parents’ driver to drop me off at her office building where I would meet her before walking out to grab lunch closeby. After a short drive, he dropped me off at Andrea’s parents’ company’s building (they might own the building?) in Bonifacio Global City, the business part of town that Andrea worked in, where I waited for Andrea to finish a meeting before going out for lunch.

Her meeting ended late so I ended up having to wait for a bit. Eventually, she came down to meet me in the lobby and we were then off to lunch. We walked around the area and ended up getting lunch at Green Pastures, a healthy food place closeby. After perusing the menu, we ordered the Nose To Tail Cauliflower Bowl (Lechon Sisig) and an Umami Bowl with some healthy juices to drink. It was a good, healthy-tasting meal to have after a few days of not so great eating. We caught up over lunch about everything we had missed in each other’s lives since Stanford but couldn’t get to everything because she had to meet up with her family at the Shangri-La Hotel around the corner for an ING promo event where she was supposed to pick up her new iPhone. At the ING event, I ended up meeting her dad Stephen Sy and two of her sisters, her older sister Stephanie and her younger sister Angela. Because it took awhile to wait for the iPhone distribution process, we sat there and continued chatting until Andrea finally got it. After claiming her prize, we strolled back to her office where I dropped her off before continuing to wander around the area until her workday was over.

I ended up walking through Bonifacio High Street, a street lined with brand-name stores and restaurants, while killing time and waiting for Andrea. I took a peek into Fully Booked Bookstore and ended up hanging out there for a while, slowly walking through each floor until I had seen all five floors, after which time I left the bookstore to continue my exploring. But around this time, the rain started to fall. Instead of walking too far from Bonifacio High Street, I just stayed in the area to avoid getting too wet with my camera on me. I strolled into and out of a couple of stores until the rain finally started to calm down and eventually stop. When the rain stopped, I jumped over to a little shopping center I had found and walked through there looking for a place to grab a drink. I didn’t find anything worth purchasing but sat around to rest before getting back up on my feet.

By this time, it was getting close to late afternoon. With some time left, I decided to roam the streets of BGC with the goal of finding as many wall murals as possible before dinner (supposedly, over the years, they have had artists paint murals in BGC). So I started my scavenger hunt for public art murals in the area. After seeing a couple, I spotted a Chatime boba shop. Just what I was looking for! Boba was really what I was craving for my thirst so I stopped by Chatime for some boba before continuing my hunt. I walked around and through and past cars stuck in post-work traffic and saw a couple murals before it finally got dark. It was time to start walking back to meet up with Andrea.

Once she was done with her work day, she again met me downstairs and we walked a block or so to dinner at Manam, a restaurant that was very well known and popular for its traditional Filipino comfort food. Because I didn’t know what I wanted to order, I let her do all the ordering since she had strong recommendations for some dishes. We ended up ordering House Crispy Sisig, Pancit Palabok, and a dessert of Bibingkang Ube. Even though my appetite wasn’t yet back to 100%, the food was delicious! The House Crispy Sisig was like crispy pork that was well seasoned. Pancit Palabok was crispy rice noodles soaked in egg (I think) with some mushrooms, shrimp, and squid in it. Yum! And the Bibingkang Ube was a dessert similar to warm pound cake with ube on it. A delicious dinner and a great catch-up conversation lasting close to three whole hours! Productive and fun!

After a long time sitting on our butts and eating, we finally got up to walk it all off before getting picked up by Andrea’s driver. Once we were at home, she showed me around the entire house and brought her mom down to say hi (I met her mom ages ago on Andrea’s first day at Stanford and she still remembers me!). Before showering and packing for the airport, we fit in another hour of chatting and catching up before I REALLY had to get ready and head to the airport. But before long, I was all clean and all packed and ready to go. Sadly, the trip to Manila was very short and I didn’t get to hang out with Andrea as much as I would have liked. But the time we did spend together after 7-8 years was super productive! A very well-spent 24 hours in Manila!

Once I had signed their guestbook and said goodbye to Andrea, her kind driver drove me to the airport and dropped me off at my terminal. And man was I lucky in getting there a bit early because the line to check into my EVA Air flight was devastatingly long. I waited and waited and waited until I finally got to the check-in desk and received my boarding tickets. Shortly after, I was through security and at a lounge, where I spent about an hour hanging out before boarding my very early morning flight to Taipei. Taiwan, here I come again! For one long, hopefully productive layover!

1. Bonifacio Global City, also known as BGC, is a financial district in Manila that was built on an old army base that was sold to developers and real-estate people some 20-30 years ago. Over that time, the area has developed at an exponential rate and has now become the booming commercial and financial area in Manila.

2. Focus Global Inc. is a company that specializes in marketing and distribution and is one of the leading distributors in the Philippines of local and imported products, like Tempur-Pedic and Ethan Allen brands. AND, Andrea’s family owns the company. Whoa.

3. You can’t get free WiFi ANYWHERE in the Philippines and Singapore without a local phone number. Why do people make life so hard??

5. Sisig is a dish that is mostly composed of leftover pork parts that haven’t been used for other dishes that are then chopped up and cooked on a sizzling hot plate and served with rice. 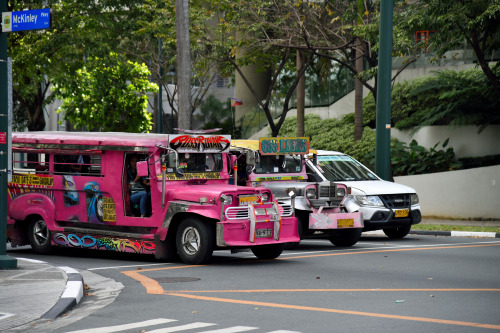 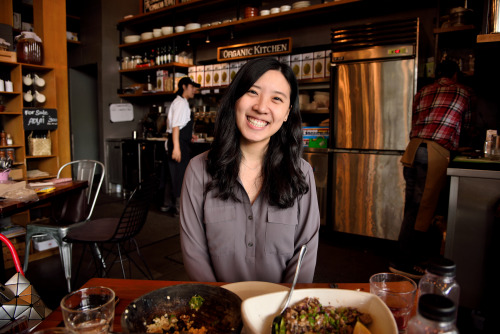 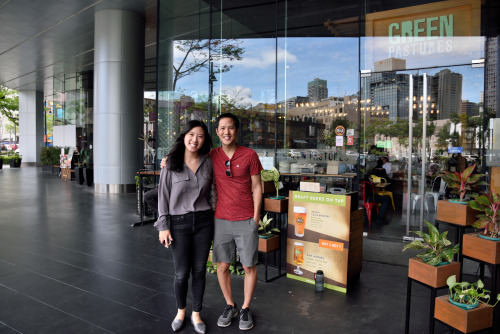 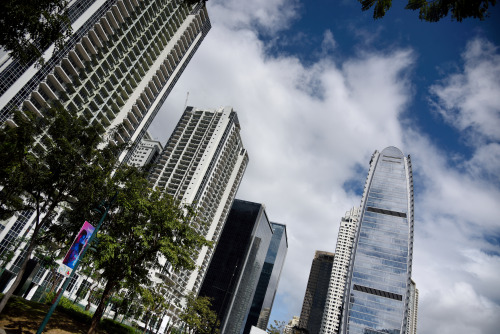 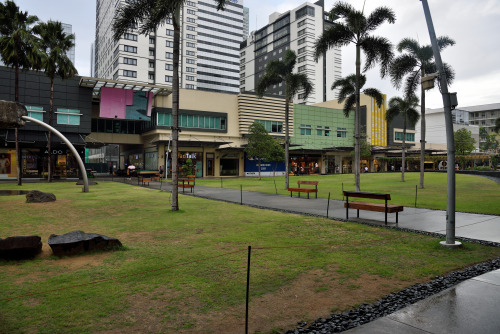 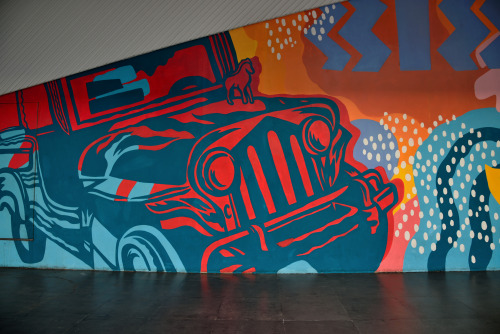 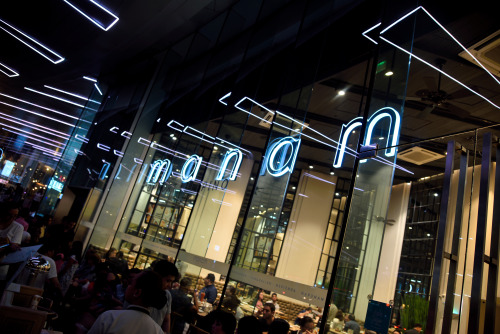 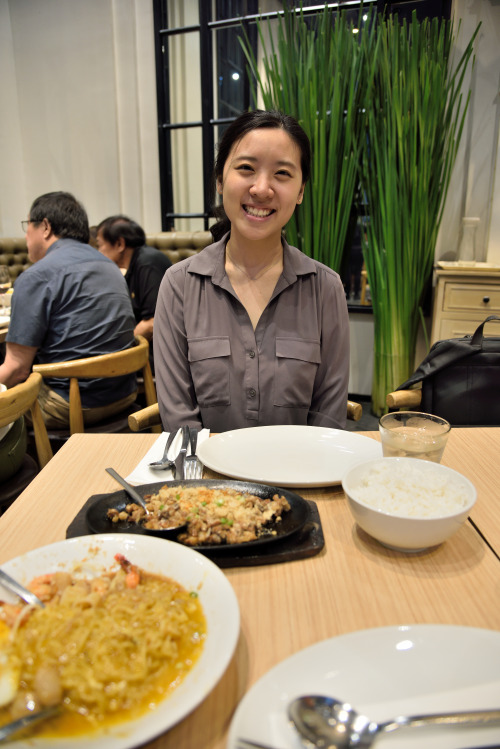 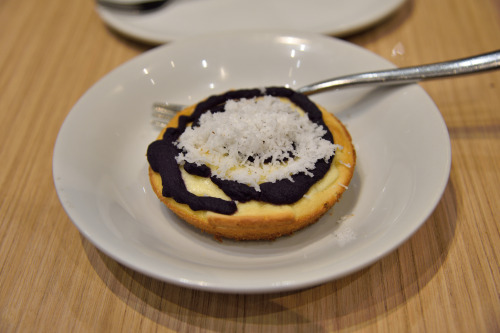 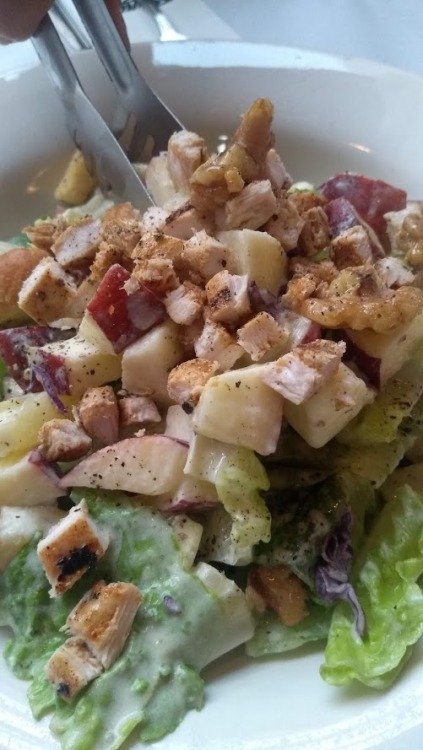 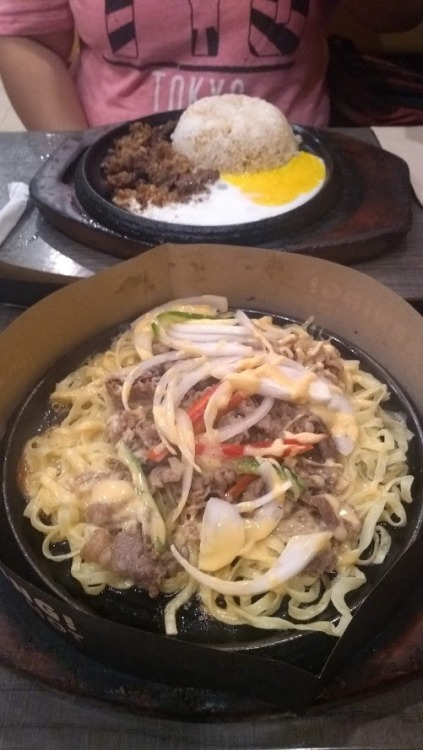 one of the best thing that ever happend is that this thing exist.

Piglet Slumber Party by Wayne S. Grazio
Via Flickr:
Six young pigs share a corner of an enclosure and each other’s body warmth to sleep after a healthy feeding.

The great Filipino sisig has taken a life of its from, say, 30 years ago when the food was in the backseat, virtually unheard of, in the Philippine cuisine glossary. Nowadays sisig has evolved from the grilled and diced pork face, snout, ears that made the cuisine such a popular beer match in the 80′s (while your sossy uncles were  ordering the T-bone steak), that you have deviations like tofu sisig and sisig fries. Heck there’s even stores called Senor Sisig where the delicacy makes front row seat.

The primary ingredient in my sisig is grilled pork liempo (belly), which I cut into strips of about ¼th inch, marinated for about 4 hours in the sisig sauce (which is soy sauce, vinegar and sugar), sprinkled with a bit of salt and pepper. I skip all the other facial parts… not that I wouldn’t eat it… I just prefer the crispiness of the belly.

Dice the meat after grilling to about a centimeter, then set it aside. Saute a bit of garlic and onions on a pan with a bit of oil, then add the meat couples with some chili (if you like it spicy). That’s pretty much it.

Because of its beer match history, it’s almost necessary to be cooking sisig on a sizzling plate. For those who are not aware with using a sizzling plate. Put the metal slate directly over fire for about 5 mins, brushing it with a bit of butter or oil. I prefer a dry sisig so I dont put much. Use a tong or a hook to place the sizzling plate on the wood (dont touch it directly, it’s very hot).

Sprinkle some onions on it before putting the meat. And then add onions on top, followed by green onions, All these onions absorb the oils that you have. Top with chicharon crumbs and sunny side up egg. And f you want to serve it “sizzling” when you put it in front of your diners, add a bit of that sisig sauce you made before serving.

I partnered my sisig with sinigang na belly. The sourness of the soup works great with the sisig. 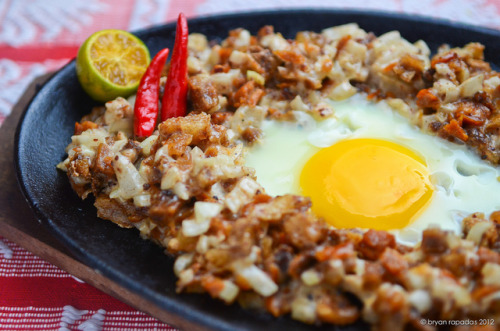 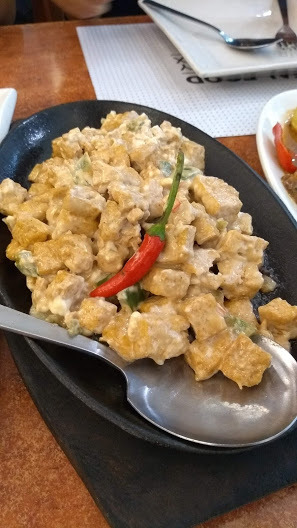