I HAVE A TREAT FOR U GUYS

HERES THE FIRST CHAPTER TO MY FAKE DATING KAIDAM AU…. IVE BEEN WORKING RLY HARD ON THIS AND I REALLY REALLY REALLY HOPE U GUYS ENJOY IT!!

Please Reblog let everyone see! Thank you favorite much! 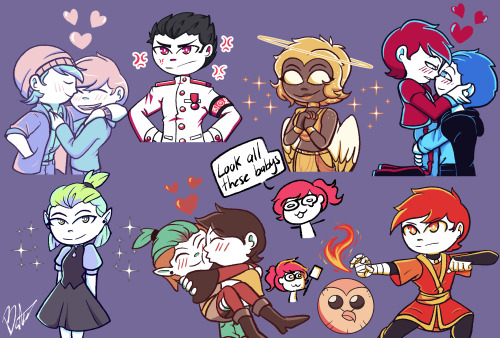 AYO WE GOTTA FIGHT FOR THIS SHOW

forgot to shade but will rb with the shading

My sister just pointed out to me that the GLaDOS song from LEGO dimensions fits amazingly well to Skeets being bitter. Considering Boost left him in storage during the entirely of JLI and we know what a jealous sass bot Skeets is. It might as well be canon to me.

Some days you just want to snark at a pred until they turn around and give you that look that means if you don’t haul ass they’re gonna make a snack out of you for a good long while and when you get that look you can’t help but make one last snarky comment before hauling ass for all you’re worth even if it’s absolutely useless and you know you’re gonna get caught =w=;

Stu figured, as he starred at the black jewelry box in his hands, that’s a pretty common start to sexual deviancy. Anybody whose born just a little crooked would probably be encouraged by being told off for said crookedness. Maybe even a little excited. But Stu wasn’t one to think about stuff like that. He’d stopped thinking about it once that crookedness became less of a hobby and more of a trait. He realized he didn’t have to prove he was crooked.

Stu smiled, starring at your initials atop the black box. They were crooked as well. You had prodded him for it, and he had laughed, reasoning that there was a limit to how smooth he could be with a pocket knife. He remembered also holding back a line about how that was a dirty lie. How, if the top had been something like, say, skin the letters would’ve turned out beautifully. He bit his tongue though, brushing off your teasing as if he had an inside joke that made him wiser.

He opened the box, bony fingers reaching in to hook a pair of black, high quality, lace panties. Your panties- Your favourite pair, with good reason, until about a month ago. It had been exactly twenty four days since you lost your virginity to Stu. Usually it was the girl that kept that kind of souvenir, but Stu couldn’t resist keeping such a thing. It was embarrassing, but he begged you for them. Nearly got on his hands and knees, too. You found the dedication endearing for some reason he couldn’t quite place. The virginity pair was supposed to be super important to the girl, right? He took it as a compliment though. Not only did you trust him enough to spread your legs for the first time, but you trusted him enough to keep the proof, what? Just lying around? It wasn’t like he told you what he was going to do with them.

He doubted you’d expect this.

Your panties, unwashed, wasn’t even what he was looking for. Nor was it your purity ring he’d stolen , or a petal from the roses you got him for his birthday- No, the center piece to his dedication box was a thirteen count stack of polaroids the two of you had taken.

The first polaroid in the bunch was taken by Sid. It was you and Stu standing in line for the ferris wheel, that neon blue behemoth of a bear he won glued to your hip, dragging its plush bear paws against the wet concrete. No matter how many times he offered to carry it, you were dead set to keeping it attached to your side. Stu also recalled how mad Billy was at him for winning the bear first. He wanted that damn bear for Sid so fucking bad. Stu just had to have it for you. Something about that win and the angry, vile way Billy starred at you carrying that bear the entire night really made that memory photographable.

The next seven photos followed a similar format. Taken by either you or Stu, you two were doing normal couple things. A date in the park- you two kissing - something artsy for you to show off to your friends. He never got the big deal about you bragging about him. He wasn’t anything special, but god did you talk like he was. ’ My boyfriend Stu did this- My boyfriend Stu did that- My boyfriend Stu is so tall and fit and lean and god I wanna suck his big dick like a lollipo- ’

Stu paused to fantasize for a moment.

Nah- That was too out of character, even for you. Stu knew that. Although the next polaroid told a different story- With his hand over your eyes to block out any defining features, there was your mouth. It was wrapped around his dick, as if you were some faceless monster chick whose only role in life had been to suck him dry-

There was something special about only him knowing who was the subject of that picture. About knowing whose hand covered your pretty eyes. Whose lips those were- Whose dick it was.

While Stu was a fan of regular, fucked up porn, he was a much, much bigger fan of this amateur avant garde shit the two of you put out. Especially when it was you, naked, back against his poster clad bedroom wall, wearing only some lacy thigh highs he’d already put a couple of holes in. He could remember the song that drowned your moans out as he shakily snapped the picture, told by the smear, and then got down on his knees to eat you like a buffet. That was the next picture. It was taken from your angle, but you were shaking too hard to hold the camera, so he took it for you. In his, and your, opinion, Stu looked rather handsome with his wide smile and nose wet like that. He wouldn’t shut up about how handsome he was after eating pussy, either.

He flipped through the remaining two. As lovely as it was to see you getting plowed by him, it truly was one of his favourite things to see, the sight paled in comparison to the thousand… No- Million words that the last photo wrote.

Framed in a gentle white box, with a simple heart he’d drawn in sharpie, there was your bare, sleeping form pressed against his. His eyes were cut off by the boarder, leaving only his slimy grin peaking out from strands of your hair. While he favoured his own exclusion, he was ticked that it cut you off just before your pussy. He wasn’t really mad, though. Something about never being able to see the jewel made him even more riled. To pair that with your bruise covered body, neck, and jaw, the picture was his perfect edge.

He’d taken the picture just after the first time- without your knowledge- and there, in the corner of your white bed sheets was a tiny splotch of blood that Stu took way more joy than he’d like to admit in starring at. There was so much weight behind the photo- The nasty of it- The crookedness.

And as he splattered your sleeping body with his come for the fifth time, the picture got a little heavier.

Skeet isn’t a blonde, he bleached his hair, guys….

Skeet seems like the kind of guy who’d sprint across the parking lot, throw all his stuff on the ground and tackle you in a hug (lifting you off the ground as he does so)

And I just imagine

Him doing that to Reeve and vanessa at the same time

I fucking love my skater boyyyyy

Ausbfjfnf he’s considerably more babey then Vanessa and Reeve who kinda highkey have massive issues with being vunerable– so they’re rlly just tough and mean and skeet is over there on his team like:

Am I the only one who thinks it’s weird that Miras best friends have never met? Idk but absolutely love Adams determination to not let skeet die haha