Does anyone truly know why Harry had the urge to try and push Sirius away when he raised his wand on Snape? Is it because he doesn’t like violence? Is it because he sees bullying at play? Is it because even he wouldn’t want Snape to be attacked like this? Is it because he fears Snape is going to retaliate on Harry or on his godfather? I’m talking about this passage, and it’s a bit frustrating because there’s scarce explaination to Harry’s motives and he doesn’t think about that any further:

I admire Harry a lot for this, but… why would he do that exactly?

But it doesn’t… really explain why. Just because Harry knows Snape is taunting Sirius wrongfully?

(Also: “the ugly look on Sirius’ face”, how peculiar)

#they are both McDonald’s obsessed#idk if any of y’all are old enough to remember this particular piece of playground equipment lmaooo#but there was literally a jail cell shaped like that#snape keeps muggle clothes for draco at spinners end#lucius and narcissa don’t know they go on outings among muggles when they leave draco with snape#but they don’t ask either anyway#draco loves it#babysitter!snape#Snape loves mcd’s#draco does too#my art#sketch#snape#hp
14 notes
kayosterum
Photo

Part two in teaching myself to art: my first painting in two decades. Picasso could NEVER 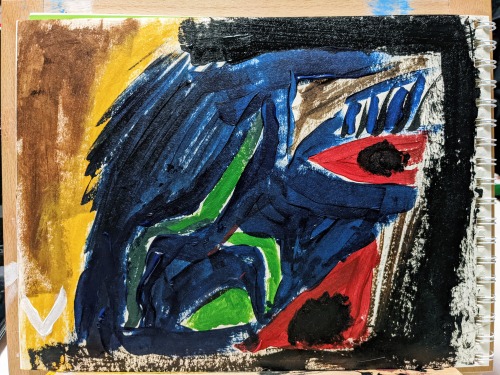 Titania had a firm grip around her wand yet she felt completely powerless watching Remus squeezing Sirius’ neck in front of her and Regulus. Everything happened so quickly and unexpectedly that it took them completely by surprise. Remus was usually calm and introverted, but he could be pretty scary when furious just like he was now – and had every reason to be so. Besides Titania and Regulus, Remus was the only person present at the trial who knew Sirius’ secret about being an Animagus and the fact he lied about the reason behind the nickname ‘Wormtail’.

“Is Peter really alive or that was a lie too?” Remus snarled menacingly. Sirius squirmed trying to get free from his grip, but the heir Black was too debilitated from the months spent in Azkaban to put any resistance against an angered werewolf.

It was very complicated for Titania to do anything in this situation – Remus’ condition made him more resistant to stunning or sleeping spells even in human form, and she alone couldn’t do anything. Regulus wasn’t good in combat and he was very exhausted to be of any help, she couldn’t count on him. Lupin also had good reflexes, if Titania tried a binding charm or a killing curse, it had a chance to hit Sirius instead, specially if Remus used him as a human shield.

“Remus,” Titania called with a soft voice, trying to draw his attention.

Idk, I just feel like Snape and Jschlatt have the same sense of humour, I can’t explain it.

Lockhart: I miss you like the deserts miss the rain.

Lockhart: I’ve adapted to existence without you, buried everything we made together, and prolonged exposure to you would be disastrous.

Lockhart: I may be ugly and untalented. 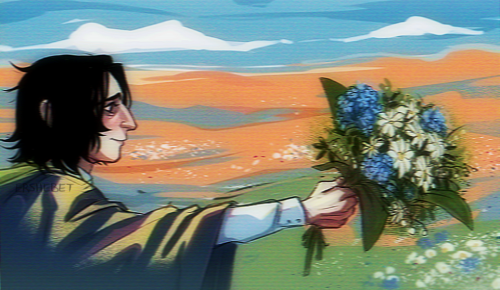 So I’m finally reading the Harry Potter books in english for the first time! I’ve only ever known the french versions, so it’s making me extremely happy to be able to do it in their original language at last (and in the new Slytherin editions of course).

“Professor Quirrell, in his absurd turban, was talking to a teacher with greasy black hair, a hooked nose and sallow skin.”

I have no idea why, but it just makes me so happy that my greasy boy is finally here! I actually had to stop reading because I was getting flutters in my stomach from the happiness.

Gosh I love this man.

Controversial opinion but I kind of hate the hp fandom on here. I’m just over here playing with my two Lockhart and Snape dolls while the neighbors are screaming at each other outside over whether or not Snape was good or bad.

And I’m here to say….I don’t care. Snape doesn’t need to be good or bad for me to like him. He doesn’t have to be redeemable. He can be a motherfucking piece of shit and I’ll still like him. And that has no bearing on who I am as a person. You can’t come at me and say I’m a bad person because I like a “bad” fictional character. What are? 4?

Summary: It is the year 1983 when the ordinary life of Robin Mitchell takes a drastic turn: she is accepted into Hogwarts School of Witchcraft and Wizardry. Despite the struggles of being a muggle-born in Slytherin, she soon discovers her passion for Potions, and even manages the impossible: gaining the favor of Severus Snape. Throughout the years, Robin finds that the not quite so ordinary Potions Professor goes from being a brooding stranger to being more than she had ever deemed possible. An ally, a mentor, a friend… and eventually, the person she loves the most. Through adventure, prophecies and the little struggles of daily life in a castle full of mysteries, Robin chooses a path for herself, an unlikely friendship blossoms into something more, and two people abandoned by the world can finally find a home.

Read Part 1.1 here! All Parts can be found on the Masterlist!

Half an hour after dinner had been over with, Robin made her way to the foot of the astronomy tower with Cas, Melissa and Lisa in tow. The latter hadn’t been part of the original plan, but due to circumstance Robin had spontaneously decided that six eyes might yet see more than four. Thus the three younger girls were babbling excitedly all along the way now, each wrapped into their warmest robes upon Robin’s insistent command, and they did not falter to chat even as Robin wordlessly unlocked the door that led to the tower’s staircase.

“It’s not over is it? It will never be over…” the boy who lived said quietly, in a small voice, with none of Gryffindor brass he had cultivated over the years of talking back and acting up.

“What?” Severus smirked bitterly “Did you think that just because the Dark Lord died he’d take all that’s bad in the world with him? That all hatred, all prejudice, all evil would just stop existing? Not even magic can do that, Potter. People will hate and hurt each other till the end of times just as they did long before Tom Riddle was even born.”

(PS: If you´re not tagged in my updates and wishes to be, let me know!)

After a long wait, chapter 66 is up and FINALLY Severus is going to come clean with Evelyn about magic and everything. So buckle up, because everything is going to change now.

“…the sun was high up in the sky. The day was hot, clear, pristine. A soft breeze came through the window bringing the scent of sea with it. A perfect spring day.

The first of the rest of their lives.”

(you mean you’ve never had it?
had what?
mcdonald’s, silly. it’s tuney’s and my favorite.
should i have?
of course! and when you do, get the chicken nuggets with chips. it’s the best, especially with cola. that’s what I always get.
all right.)

i have an hc that snape loves junk food, particularly because he was deprived of it when he was younger. his favorite is mcd’s, and it’s one of the few ‘luxuries’ he allows himself to have when he’s older. he always orders the same thing: chicken nuggets, chips (with an extra sprinkling of salt), and a cola.

You know, many people assume that Snape would see Lily in the mirror of Erised. And I don’t think they’re wrong per se. I think that for a great part of his life his greatest desire was to see her alive and happy.

But, when talking about Snape as headmaster, I don’t quite agree. I think his heart’s desire was something else. My belief, is that if Severus Snape had looked into the mirror of Erised that final year, he wouldn’t have seen Lily Potter. Instead, he would have seen Harry Potter, alive and without his scar. A Harry Potter who didn’t have to die, for the Dark Lord to fall. A Harry Potter who was happy.

Summary: Andrea seems to be just another Slytherin pureblood, young woman, ready to face her senior year at Hogwarts. She would have never expected the Goblet of Fire to choose her, among all the others. What Andrea will need during this amazing year will be her closest friends, new and unexpected antagonists and the help of a mysterious, dark and fascinating professor.

The fact that “Good Albus Dumbledore” and “Good Severus Snape” tag exist on Ao3 makes me despair for the state of fandom. These character are already good. There is no need to clarify like you should with someone like Lucius Malfoy.