Leo tinkering with the Archimedes Sphere…

Not Nico for a chance xD

Watercolour, ballpoint pen and my sketchbook 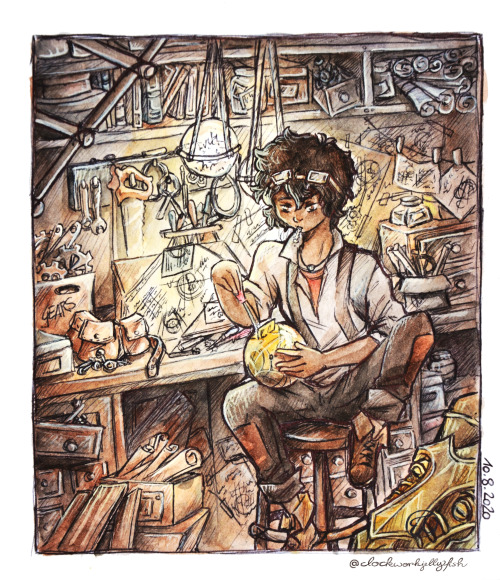 Leo: Fortunately, only one crow showed up.

Persephone sends her regards (and some flowers) from the underworld.

“ Honey you’re familiar like my mirror years ago. Idealism sits prison, chivalry fell on its sword. Innocence died screaming, ask me I should know. I slithered here from Eden just to sit outside your door.”

just realized silena was, in a way, the reason for charlie’s death. don’t hmu

dressed in his own garb, made by the woodland nymphs in honor of persephone reclaiming a throne from malik, dexter was feeling quite dapper with a literal heat that could set fires a blaze. the tiny silver detailing of the bones and chain across his collar to the shaven slit of an eyebrow he gave to himself for the sake of looking a bit edgier, he was fucking hot.

and as such, dexter was also someone who knew that participating in the joyous activities of the godly world had its benefits.

his eyes set themselves on the man tinkering with something while near the drinks, dexter knew that it’d be easy to persuade bastion in a dance for charms and so without skipping a beat, the son of hades tapped the other on the shoulder while extending a hand out for the other and a beaming smile on his face. “ you look like you could use a dance, bastion. ” palm out turned, he gripped onto the blacksmith son’s hand and led him to the dance floor tout suite.

Dexter had slowly been acclimating back to reality and something about no longer being in the Underworld felt shitty. He didn’t necessarily enjoy himself down there but it seemed as though there was a piece of him that thrived down there. Everything else seemed to be falling to the wayside up here and every spar just didn’t connect anymore after dealing with such high stress in proving himself worthy.

So, the best way to deal with it was to find Bastion and pester his nerdy ass. Dexter sauntered his way past Ash and found the tinkerer meddling with something small, all dirty and sweaty. “ Hi Bash, don’t you look official. ” His hand rustled the other’s hair as one did to a little kid before he leaned against the forge. Immune to fire, Dex hadn’t had to worry about the flames.

Dexter still had a few more rolled blunts from Elijah’s stash and the night before Malik felt like the perfect time to light one up and relax before having the most stressful day of his life. This was it, tomorrow would showcase if Dexter was truly worthy and if he was the new reigning king of the underworld. There was nothing else that could be done, the team were chosen and the plans explained to everyone ready to usurp Malik. “ Bash, you up? ” He waits outside the man’s tent, door already opened to the outside of the Undertown as he blew a puff of smoke right at the tinkerer’s tent, watching as the smoke split at the hard edges of Bastion’s tent.

INSATIABLE. the word feels like hades’ fire against his skin. the amourisia flower filled his thoughts with a frenzied thought, a gaze locking in with the forge’s son in an instant and it was immediate desire that flowed through the son of athena in a way he hadn’t felt before in his life. cock, immediately hard and nipples rock head in frustration as the man punched his arm quickly to try and clear his head for only a moment. he needed a bathroom, he wouldn’t be caught like a filthy animal with the rest of them lured into lust without any inhibitions. he quickly jerks his head, gesturing for noah to follow him as he bee lines it straight for the nearest bathroom and quickly takes off his leather jacket that clings to his sweaty torso. it’s his lace shirt that peels off next as ari flings it to the corner for now, splashing himself with water to keep his burning sensations sated.

“ close the door, noah and lock it. ” he had to apologize now because this frenzy felt overwhelming as every inch of skin was sensitive to touch. whatever was in that flower wanted them to fuck badly and ari wasn’t sure he could hold out for very much longer.

[ @mcgicalies​ ] ari couldn’t fucking believe it. out of all the people who disappeared and decided camp wasn’t worth it anymore, that ezekial apana would be on that list. it was absolutely devastating. his brother in arms / curse-keeper and fellow worthy had felt the pressure to be too much to bare. not even a goodbye, but ari couldn’t hold it against him. this was all voluntary and if this wasn’t for you, so be it.

but now it left ari in a predicament, knocking on the door of the Hephaestus cabin to see if it had been taken yet. he needed the scroll of exorcism to banish his curse and he could only hope this new son (if he was there) was kind enough to pass it over to him.

Me: yeah if I were a demigod I’d probably be the son of Apollo, maybe Athena idk I like music, I’m kinda creative…

Me, 30 seconds later: *mindlessly taking my pens apart, disassembling my pencils and mixing and matching, all without realizing really what I’m doing*

[ @smplmchn ] it was the first night that he had that awful fucking dream, the same one that hit as soon as he shattered the necklace. he saw himself standing on a field, it looked like a destructed olympus burning behind him as the sky burned red in a fury. a sun of purple hues lit up the sky but it caused ari to tremble, his body feeling so hopeless and that the only emotion possible was despair. the first time he woke up was 45 minutes after he went to bed. it seemed to be a constant cycle of the same dream and simply 45 minutes, enough to never hit REM sleep. after five bouts of the terrorized nightmare, ari decided to take a quick break and walk around the camp. the temperature seemed hot, his body was burning as he took off his shirt and walked just in shorts. the summer nights comfortable enough to deal with this overheating sensation as ari headed towards the water once again, leaving his weapons and hoothoot in his cabin. ari wasn’t sure what he was looking for, but he knew that from the ingredients he found, this nightmare would be in his life for a long fucking time. 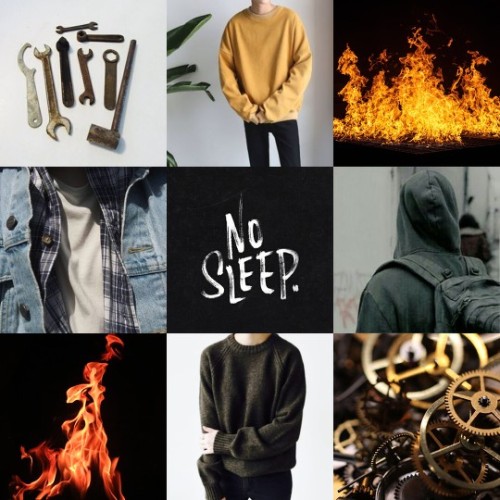