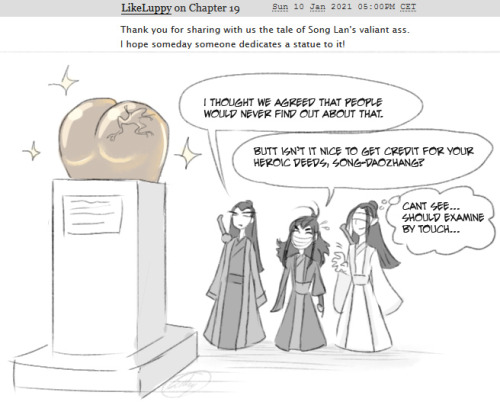 so netflix has many options for the thumbnail they show you for a show, and… netflix knows. THEY KNOW. I haven’t even been rewatching their episodes. NETFLIX KNOWS MY CRIMES. This looks SO GAY. Why isn’t this a whole show. Why. They know I want it.  (read about the thumbnail thing here)  https://www.vox.com/2018/11/21/18106394/why-your-netflix-thumbnail-coverart-changes 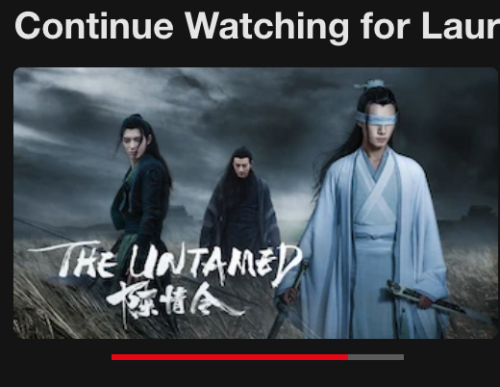 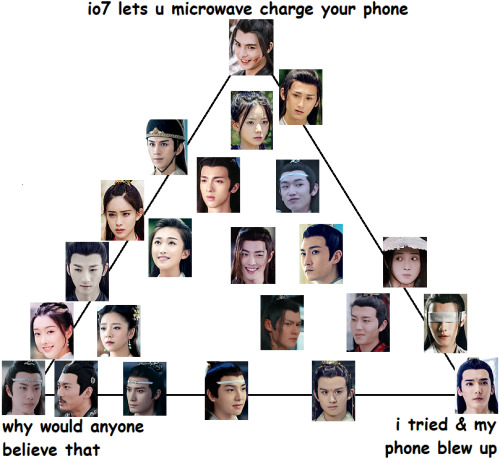 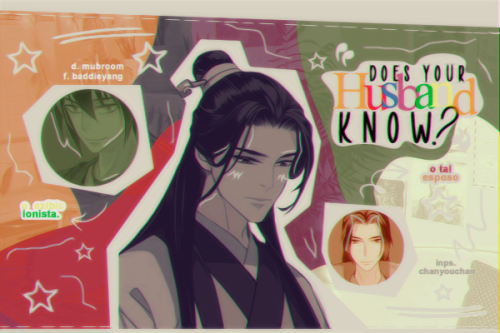 title: king of beasts
fandom: the untamed / mo dao zu shi
summary:
A song is calling to him, and the voice is his mother’s. Wei Wuxian ignores it at first, determined to focus on his upcoming wedding to Lan Wangji, recently named Chief Cultivator.

However, the events of Guanyin Temple and the coveted coffin inside draw the attention of some very powerful rogue cultivators. The leader of this group turns out to be an old enemy, long thought dead. So Wei Wuxian must follow the song on the wind after all, and track down his mother’s immortal master, Baoshan Sanren.

A post-canon, find-BSSR adventure fic. Our heroes journey to find immortal super cultivator, but end up finding themselves.

a/n: when i finished CQL, my one disappointment was that we never actually do meet baoshan sanren, because she sounds like a badass. for our favorite husbands to have an adventure to find the real celestial mountain she hails from felt like a very natural sequel to me. so here i am, writing that.

Wei Wuxian shot backwards from the table as if lightning had struck him. He landed on his back, writhing and gasping for air. His hands clawed wildly, desperately at his own throat. Despite being open, his eyes were blank and unseeing.

A set of instincts within Wen Qing instantly activated.

Before, she had been watching from afar with nothing more than mild curiosity to see Empathy performed. This was supposed to offer clues to Baoshan Sanren, although her optimism had been tempered. Now, seeing someone in such sudden peril, she automatically jumped into action.

But she was not the only one to move, nor the fastest.

That broody Chief Cultivator leapt from his guqin at the first sign of trouble. He was at Wei Wuxian’s side in an instant, eyes wide with worry. This was the most emotion that Wen Qing had yet seen from the man, so compared to before, he was completely fraught.

To her surprise, though, Lan Wangji wasn’t the only other one to spring toward Wei Wuxian. Jiang Cheng had bolted over, eyes wide with alarm equal to Lan Wangji’s. He saw the man on the ground strangled in pain, and dread set in. Whether or not he realized what he was doing, Jiang Cheng reached out in a flash toward Wei Wuxian in an apparent reflex.

Jiang Cheng’s hand snapped back, and he stumbled backwards as if physically struck. With such sharp words from Lan Wangji, he might as well have been. Even Wen Qing was taken aback, initially assuming she had been the one on the receiving end of that icy order.

No, those words were meant specifically for Jiang Cheng alone.

Snapping out of it, Wen Qing continued forward.

Lan Wangji didn’t spare Jiang Cheng a second thought, after that. His hands worried in the air for a second before going to Wei Wuxian’s wrists, preventing the man below him from scratching any more at his neck. His voice had the slightest of tremble, but the panic was unmistakable.

No answer came, other than the strangled, gargled noises escaping from Wei Wuxian. The restraint on his arms caused Wei Wuxian’s body to thrash even more uncontrollably, his legs kicking in all directions. His heaves only worsened.

Kneeling on the other side of Wei Wuxian, Wen Qing grabbed Lan Wangji’s wrist.

As expected, he gave her a glacial glare. This man would not abandon the side of his beloved so easily. Wen Qing didn’t back down, though. Especially when she was the one here with any sense.

Lan Wangji could glare all he wanted; it wouldn’t make Wen Qing any less right. However, seeing Wen Qing’s own unyielding expression, Lan Wangji softened. His eyes surveyed her face, and whatever he saw reminded him to trust her about this. He withdrew his hands from Wei Wuxian, though not without looking like the action physically pained him.

Wen Qing took over from there, and she immediately jabbed Wei Wuxian in all the right joints to make his arms go limp. Lan Wangji might have growled at her, but she didn’t have time for him. Wei Wuxian was now unable to scratch at his throat again – and cause more damage to himself – but he was still convulsing like he was possessed by pain. She moved on and hovered her hands over Wei Wuxian’s body from top to bottom, scanning for injury or the source of this violent disturbance.

Meanwhile, the others had also gathered around. Jiang Cheng was as pale as a ghost with an anguished expression, but he continued to stand back. He looked helplessly from Lan Wangji to Wei Wuxian. Those two kids – one was the leader of the Jin sect, and the other a Lan disciple that Wen Qing didn’t know – rushed to either side of Wei Wuxian but kept a wary distance.

what if xiao xingchen hadn’t died? how would song lan have communicated with him? would he have traced what he wanted to say onto his palms? would they have created a language only the two of them could understand? and later teach it to other kids like them?

Have a teaser for Heaven Has A Road But No One Walks It chapter 20, aka next week’s chapter! 8D

My wife gifted me a commission slot with the talented szaszkeh ( @szaszkeh on twitter) for Christmas and this is the beautiful art that came out of it! Isn’t it gorgeous? ♥ ♥ ♥ ♥ ♥ ♥ 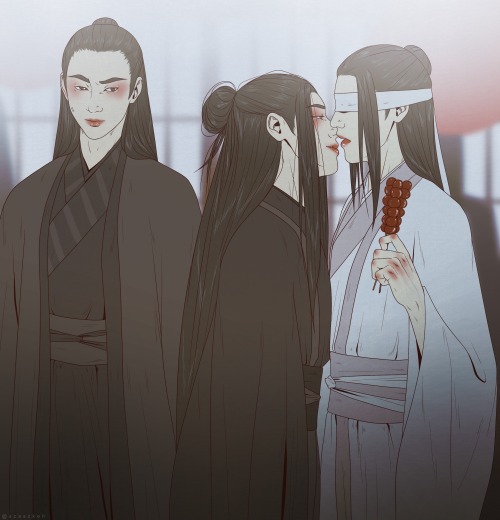 modern au where wei wuxian gives xiao xingchen an energy drink because he’s thinking, ‘i’ve dealt with lan wangji drunk, nothing can phase me’ and then two hours later he’s on the phone to song lan like ‘please come get your husband we’re at the xuhui IKEA and he won’t stop trying to help people the employees have given up i was just supposed to get more bowls song-xiong stop laughing please he’s in the kids’ section!!’

#wei wuxian was like 'it's early what's the harm' and thirty minutes later xiao xingchen is vibrating so hard he's about to take off#and he's like 'huh. i guess this is why they only drink decaf tea.'#wei wuxian#xiao xingchen#song lan#garden center au#songxiao
22 notes
yustinamishka
Photo

A sect that values common ideals instead of blood ties. 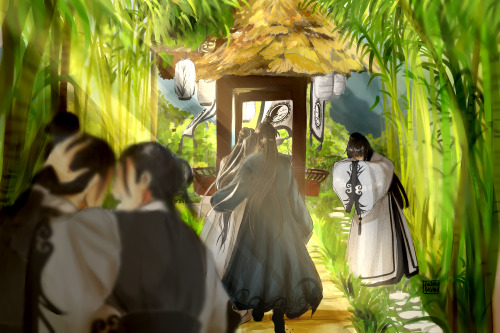 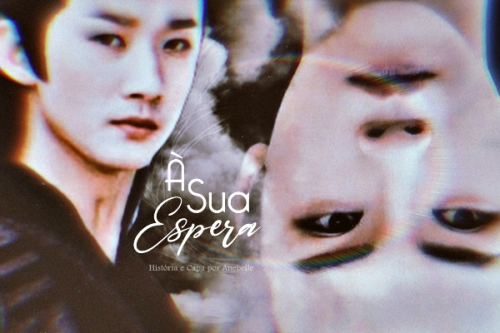 currently crying at wwx hoping for a happy ending for the yi city arc despite being perfectly aware that everyone but xy ends up dead. biggest mood. 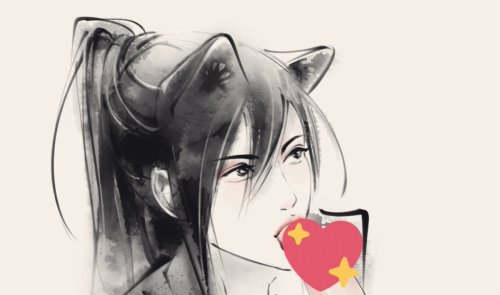