Souta: Kagome you told her about CREDIT CARDS?!

(But how cute is this sly little heathen.)

Sota: Sir, if I could just say that my baby gremlin niece maxed out my credit card-

Mortgage Specialist: Why are you blaming a folklore legend on your debt??

He’s no match for his cunning niece 😂😂😂

All Inuyasha ever bought was some ramen and snacks.

Me watching Towa get the scene with the picture book of Kagome and her family and friends with her future husband in Kagome’s room talking to Kagome’s brother instead of Moroha who would benefit from experiencing something like that more seeing as she’s Kagom’s daughter and admittedly knows nothing about her:

All jokes aside, though, seriously.

Not saying that Towa didn’t need a scene with Sota as her dad giving her the okay that she can go and that she belongs in the other world, seeing as that’s where she came from etc etc. Towa needed that from Sota because he’s, for all of the talk of Sesshoumaru, her father. Adopted fathers are real fathers and she needed that reassurance she was doing what needed to be done and to be given the nod of approval from her family so she could travel with no regrets and know that she had their blessing. It was a wonderful scene she needed to have. But given Moroha knowing nothing about her mother or father at this point, and Toa having no real connection other than Sota Kagome herself or InuYasha, I feel it would have likely been more comfortable for them to have had that talk at home or in front of the tree where he found her or something versus bathed in the memory of Kagome. It may mean something for Sota, sure, but even then that environment felt like it’d be better for Moroha to experience with either him or, better yet, Mama Higurashi and be going over who her parents were and that this very place is where they used to come and go from.

Though the Higurashis embracing Moroha happily with open arms and Sota taking the use of his credit card (How did Moroha figure that out, btw?) with good humor for the sake of his sister was cute; their reactions to meeting their blood relative born from their sister/daughter who’s been gone for two decades is honestly underwhelming and weird to me - Especially since she can’t seem to answer any questions and gets a little weird about them comparing her to her mom. True, she could have bullshitted any questions about Kagome or InuYasha they may have fielded, but I think if she knows nothing about them there’d be some concerning red flags for Kagome’s family who clearly loved both of them.

I know it’s for the sake of the plot going forward, to keep that mystery going, but I feel like even for a culture difference between the US who is considerably more touchy feely and emotional to the Japanese who are typically more reserved that’s a lot to expect a family not to get serious and concerned about. I don’t doubt we’ll get Moroha/InuYasha/Kagome stuff in the future, they can’t keep teasing that she knows nothing about it and not address it, I just wish that logic wasn’t completely thrown to the wind for the sake of humor and fan service.

Buuut I think way too hard on these things in general. 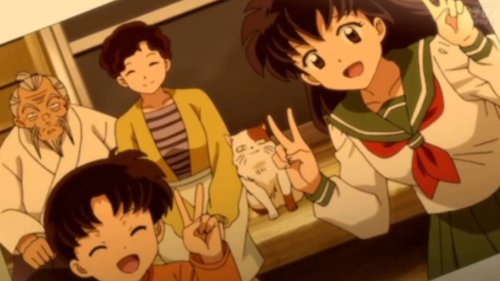 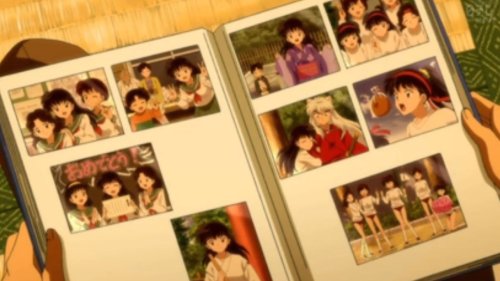 People comparing Sota and Rin in age thus using it as evidence that Rin is the mom… doesn’t really make a point? Look, I’m not saying she ain’t the mother (as much of a yikes for me it is, she most likely is.) but, Sota has a kid that seems to be half the age of Towa. In reality if Rin and Sota are the same age, Sota still had biological children at a later age than Rin.

I don’t understand the point comparing Sota and Rin in age. I feel if y’all want to make a point on the girl being a mom, there are somewhat better reasons to grasp onto besides that lame comparison.

Sota and Towa in Kagome’s room.

Awww It’s safe to say that Sota and Towa are in Kagome’s room. He’s probably showing her Kagome’s photo album.

listen I know that Towa is essentially Sota’s adopted daughter but lets be real. that should be Moroha looking through Kagome’s old shit.

I have seen many people upset and sad over Sota’s lack of emotion towards Moroha being his niece, so here is my two cents and why I think he is acting this way.

Sota never met his father, according to a guide released by Takahashi he died in a car crash when Sota was still yet to be born, therefore he never had a fatherly figure with him (except for his grandfather who I am sure played a major role in raising him and Kagome); he had his mother and his older sister who looked after him all the time, they were always there for him and he was literally the baby of the family.

Until the incident with the well happened. It turned the simple life of Higurashi family upside down. Sota however never appeared to have a problem with the existence of demons or the fact there were times a guy with silver hair and dog ears appeared in their house looking for his sister, in fact…he liked it and he saw in Inuyasha the brother he never had, the male figure he was probably lacking in his life. For those who didn’t watch the japanese dub, Sota called him “Inu-onii-chan” all the time, which translates to Big Brother Inu.

Then the well vanishes, Kagome returns safe and sound but the portal between worlds closes. Everything is back to normal.

Three years later and suddenly his sister makes the decision to leave for good, she has crossed the portal between the two worlds once again and never returned. Kaede, in the latest episode, said over 15 years had passed since the last time the well was used. This means Sota hasn’t seen his sister in over 15 years. Yes, he didn’t hesitate to adopt Towa after he met her because he knew demons existed and he knew probably nobody else would take in and help a four year old child who had out of the normal hair and eye color. There is even a chance that by looking at Towa and seeing her white hair, Sota might have thought that she was Inuyasha’s and Kagome’s daughter because until then he had only met one person with white hair.

10 years later after adopting Towa, these two mysterious girls cross a portal and one of them had an awfully big resemblance to his sister. We as the audience of course know she looks exactly like both her parents and whose daughter she is, not just because we have been told prior to the beginning of the series but because we have seen how she acts, how she speaks, what her abilities are.

But please let’s keep in mind that the Higurashi family hasn’t seen their beloved Kagome for over 15 years, that is a very long time! Even Mama Higurashi says “Her eyes look like Kagome” and has apparently told Sota that Moroha might be her daughter. Might is the keyword here. Moroha, according to her initial bio, doesn’t remember much of her parents and therefor there is a chance that even if the Higurashi family shows her photos of Kagome or even mentions her name, Moroha might be “Who? Never heard that name before.”

To us it’s frustrating because we know the truth but to them, the characters, it’s a crush of hope, this girl who they thought was Kagome’s daughter says she never heard that name before thus breaking down any connection the family believed they might have.

In short, they would be getting their hopes up for nothing!

So ask me? Kagome is a very touchy subject for Sota to talk about, speaking about the existence of demons is one thing but speaking specifically about his sister might bring bitter memories to Sota. That could be the reason he probably never mentioned his sister to Towa or talked about her travels with Inuyasha through the well (which has stopped working, it would also be giving Towa hopes that she could eventually cross back to her world). In the second preview of the next episode, we have two shots of Towa and Sota in a bedroom which is most likely Kagome’s old room, all packed up, and Sota is holding what looks like an album of photos. This to me, is the moment Sota reveals to Towa that he had an older sister and reveals what happen to her.

In that scene we see Sota’s face shadowed and Towa with a concerned face, there is also a scene of Towa hugging him tightly, whether they are crying or not is still up to debate.

Sota has never met his father, lost his sister to another world he can’t reach her when he was just 11 years old and now might have to bid goodbye for good to his eldest daughter (they don’t know if the portals can be open again, considering this one opening is because Moroha will make a deal with Root Head).

So I really can’t blame Sota for lacking in reaction regarding Moroha nor the fact he most likely never told Towa about having an older sister that crossed worlds.