Behind the scenes of Soulmates episode 1.04 “Layover”

►Anne & Gilbert || Lift Me Up #SaveAnneWithAnE

anne and gilbert {season 3} | Hold on

Obi-Wan doesn’t expect the world to burst into colour as he tours a facility that shouldn’t even exist, but his life has never really gone as expected.

He wants more than anything to react, to go down there and find the other half of his soul, to do something, anything, but he’s a Jedi. And so he keeps his expression serene and continues on. The Force will have to wait for him to complete this bit of bidding before he goes into the next. He just hopes his soulmate will forgive him.

The day Cody first sees a Jedi is the same day he sees the world in brilliant colour for the first time. The Kaminoans assumed the clones would be without soulmates, but as clone after clone laid eyes on their other half and saw this magical colour they had to accept that perhaps the clones are a bit more than exact copies of the Prime.

As Cody, CC-2224, sees the world in colour for the first time he is presented with two problems.

Number one: the Jedi has no way of knowing which clone is his soulmate. The way the Jedi stiffens as he lays eyes on Cody is barely perceptible but it is there, but Cody stands in a knot of other brothers, part of a much larger mass of people who all look identical.

Everything happens too fast for Obi-Wan to even process that he found his soulmate and doesn’t know who it is. He’s fighting Jango Fett, captured by his own grandmaster, tied to a pole to be executed, then fighting again in an arena littered with the bodies of his family. Then the clones come and the tide turns but they’re still fighting and now there’s a war.

He hasn’t even had time to come to terms with it by himself, never mind even attempt to figure out who his other half is.

Anakin has noticed, he knows, that Obi-Wan is distracted but his Padawan’s preoccupation with his own soulmate and their new romance (which he still thinks is secret) means he hasn’t looked too closely. Obi-Wan is grateful for his padawans’ lack of subtlety in this case, and he’s glad him and Padmé have finally figured everything out. Anakin has come a long way since their first meeting.

Obi-Wan’s friends are scattered across the galaxy, and his master is dead. So for now, he will keep this to himself.

When Cody is assigned to the 212th Attack Battalion he knows better than to assume it will be easy. He’s keeping a huge secret, not only from his General but from his brothers. But fuck, he didn’t expect to fall for Obi-Wan Kenobi so very quickly.

The man is kind, he treats all Cody’s brothers like individuals in a way no one ever has before. General Kenobi prioritises the well-being of his men over the success of a mission and even himself (which causes Cody an incredible amount of stress). He despises caf, wrinkles his nose at the smell of it when he thinks no one is looking. He’s obsessed with tea, always gifting boxes of it to the kitchen. And spices, the General always brings them giant packs of spices. He speaks Mando’a, respects their customs, both inherited and solely their own. He respects their names, memorises every troopers and makes sure to address them directly.

The general, Cody’s soulmate, teaches Waxer and Boil Twi'leki, Range knitting and lends Mac actual flimsi books. He gives them paint and hair dye and encourages them to explore the world. More than anything, he respects their soulmates. Whether they’re other brothers, sentiments met on campaign or Coruscant, he encourages them to connect. It almost makes Cody feel… guilty, for the secret he’s keeping.

“Oh, thank you Commander,” he accepts it absently, more focused on the holomap.

Cody says nothing, just places a kelp bar by his elbow and goes back to his datapad.

The longer the war drags on, the more Obi-Wan aches. There are millions of clones, and one of them is his soulmate. He could send his soulmate to die and he’d only know when the world went grey. He has nightmares about it and when he wakes up he feels sick because being his soulmate doesn’t give one clone more value than any other so how can he even think like that? How can he be grateful that one particular man continues to live when he keeps sending trooper after trooper to their death?

#soulmates, #colours, #this was fun, #I’ll write more of this but this is it for now, #want to see more?, #thanks so much for prompting me, #prompt, #codywan, #the clone wars, #tcw, #Star Wars
13 notes · See All
starlet-skyText
#youniverse, #unconditional love, #my love, #divine love, #happiness, #smiles, #nature, #hand tattoos, #finger tattoos, #happier than i’ve ever been, #my man is the best, #in love, #eternity, #soul connection, #soulmate love, #soulmates, #mine, #so cute, #sunshine, #blessed, #love, #new relationship, #new beginnings, #true connection, #true love, #you are my sunshine, #you are the best, #my world, #my man right there, #masterpiece
12 notes · See All
willofhoundsText

Yamato said his right hand pressing into his left side, “I’m sorry if only one of us can go back,” he grunted in pain silver eyes screwing shut, “It has to be you.”

Izuku slammed his fist into the ground stuck inside the runic circle yellikg, “DON’T DO THIS! WE CAN STIILL GO BACK AS PLANNED! YAMATO! We can still figure this out!”

His commander and friend smiled tiredly as he shook his head and continued, “There is nothing left to figure out here. You need to go back and fix our mistakes. I believe in you.”

Tears welled up in the green eyes as he tried to deny, “I cant do this alone. Yamato… you promised. You promised as long as I was your subordinate I didnt have to be alone anymore.”

“Make things right,” ordered Yamato, “You are probably the only one who can do it. You just have to do the very thing you taught me to do. Never give up and keep pushing forward. To believe that there is always hope. The Dragon Stream alone isnt enough. I have to stay and sacrifice my magic to send you back. You have to go.”

“You can. You can save our world from the fate I doomed it to. I believe in you. This wont be the last we see of each other. Just promise you will be my friend again in the new world. That’s all I ask.”

“YAMATO DONT DO IT!”

The Dragon Stream activated around him as the door behind Yamato was blown open. A familiar blue haired villain stalked in followed by several nomu.

Izuku tried to shout denials as the world around him went black. Yamato’s body collapsing to the ground from the lack of magic and a nomu stalking towards him being the last thing he saw.

It’s not what you get, or even what you give, it’s what you become

in a dream was written as an ode to a love that spans across lifetimes; bright and real and achingly inexorable. a love that transcends time and space and rational thought and any and all earthly woes. it was written to honour twin flames and little synchronicities and endless and inexplicable devotion. but most of all it was written from the heart. and now i’m giving it to you. and i hope you’ll connect with it and i hope you’ll have it stuck in your head like i have for the past five months.

the video was so fun to put together! i cut the words out of well-loved books which seemed only fitting- stories within stories, you know? anyway, here it is. the most important love letter i’ve written so far.

Soulmate AU where when you first see your soulmate face to face, you get a brief slow downed image of what they will look like before they die. And it’s not like you can just forget it. That memory stays engraved until the very end.

The scenarios are literally endless. As well as how the soulmates may react. Some may be content and try to enjoy every day to fullest. Others may begin to become obsessed, doing everything in their ability avoid that image to come true.

Maybe even a plot twist where the image you see matches exactly how you first see your soulmate. Perhaps maybe there is a chance of changing one’s fate after all?

Incorporating the star-crossed lovers trope with Stiles and Derek, you can find Batwynn’s full art in “Anchored”, the Teen Wolf soulmates zine! You can order your copy November 25th!!

You can follow the stars in just ONE MONTH!!! 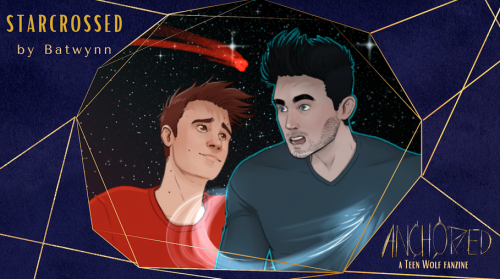 Anyone watching Soulmates on AMC?