Chapters: 1/1
Fandom: The Order of the Stick
Rating: General Audiences
Warnings: No Archive Warnings Apply
Relationships: Elan & Nale
Characters: Elan (Order of the Stick), Nale (Order of the Stick)
Additional Tags: Post canon, Closure, Sibling Bonding, ghost summoning, They’re both probably so very ooc as I have never actually written oots before but sh, I just want them to have a conversation, they both deserved so much better, i am still an unapologetic nale stan, Funeral kinda, Burial Kinda
Summary:

Here Lies Nale
He was not a very good brother, but he was my brother nonetheless, and I loved him.

Ah, Telepathic Bond, or as I like to call it, the free metagaming spell!

You never have to worry about justifying table talk ever again!

If Caleb ever picks up that spell in Critical Role, they should rename it Widowgast’s Metagaming Pigeon.

In today’s D&D game, our artificer just picked up a dead warforged as a long term project.

You collect some strange stuff after a long enough adventure.

Or maybe the runes deal necrotic damage and the lich just laughed it off. That’s a pretty big gamble to take.

You can tell tht this is set in 3.5 and not 5E because all of the tension of the scene is based around which team has the more effective Ranger.

You make a fair point.

yeah, I’m with Elan on this one, this is all way too sudden.

There are still so many more opprotunities to ratchet up the tension by geting us closer to the end of the world!

Sometimes the only way to make a good plan is by process of elimination.

Order of the Stick has been pretty good at having a villain who wants equality, yet managing to make it not condemn such efforts (though nowadays I would suggest not doing it in the first place, this is a long running series.), and definitely not going to just drop the topic without resolution at the end given what the writer has to say about the issue.

But the point is this: a goblin can be killed for just being “evil” while an evil human can be treated as a valued member of a freaking lawful good society.

But just because his cause is just doesn’t mean it excuses a plan to hold the world hostage or working with a sadistic lich.

Redcloak is a weaselly liar to himself, who being haunted by guilt, sunk cost fallacy and and a need to “win”.

Its not him being “mad” or “overemotional”. He’s making choices, bad ones but they are concious choices, not a frothing maniac.

And some of those choices I can’t blame him for except for his earlier actions that put him in that position where its the best choice with the information he has.

Nobody ever sends me asks so thank you for taking the time to send one. I'mm glad you liked it :) It’s sort of fun to be behind on a webcomic. Getting a lot of content at once is very different from getting a little content always.

#i didn't even do this on purpose but i realized it a bit ago and was waiting for somebody to notice but nobody did :/, #vaarsuvius, #order of the stick, #oots, #violetta mondarev, #girl genius, #webcomics, #funny, #bff tag, #rose-icosahedron
20 notes · See All
arn-and-friendsText

Apropos that Caleb Widogast and Varsuvius have very similar self-image.

#critical role, #order of the stick
7 notes · See All
satanicartpirateText

Sometimes, I get Order of the Stick feelings, and I have to DO something. I think Roy is my fav character, and that makes sense, since I have a soft spot for -smart and strong- very good lawful bois. 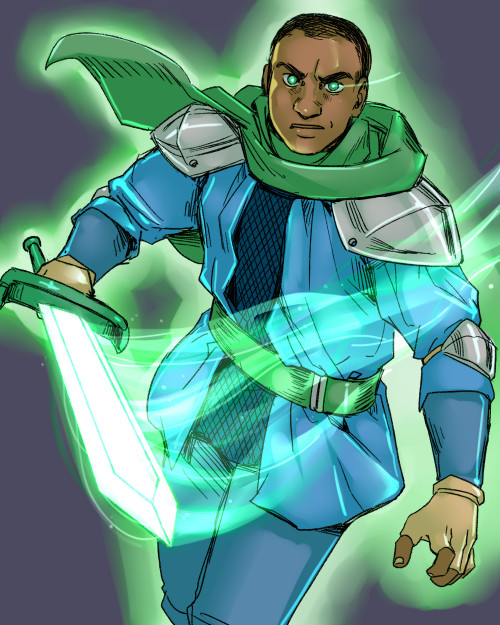 Ahhhh so many questions!!!

Are we gonna get to finally see behind one of the doors?
Will the Order and/or Team Evil find monsters behind their chosen door?
Are we really going to get the OotS vs TE battle so soon?
Will the IFCC decide to step in and claim V’s soul?
Where is the Monster in the Dark and will he play a role in the fight? Assuming there even is one??

I don’t know! But just generally: much squee! Very excite!

And I concur with Minrah - it’s nice to see the Order communicating well and working together. A somewhat ironic statement of course, but nevertheless true, and all the more powerful for it. It feels like they’ve really earned it.

Plus I liked V’s quizzical eyebrow raise when Roy turned to Elan for input. That was a nice background detail.

#order of the stick, #oots, #strip 1218, #i hope oona survives, #and the order of course, #including belkar, #i don't think it's his time to go yet, #redcloak on the other hand..., #if he died now that could be interesting
7 notes · See All
dontletmeontheinternetText

from Order of the Stick https://ift.tt/3jPZcKW

#Order of the Stick
0 notes · See All
weaver-zPhoto 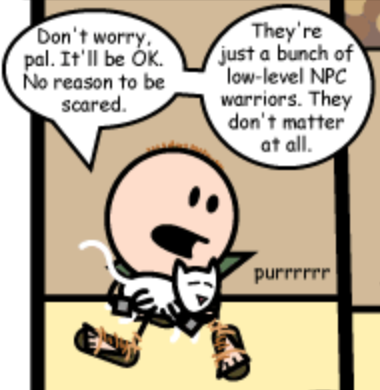 #belkar bitterleaf, #dungeons and dragons, #mr scruffy, #oots, #order of the stick, #posted on my main because i almost started crying over this
51 notes · See All
belkarbitterleafText 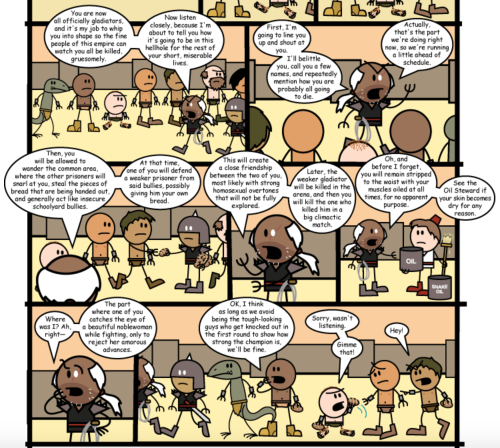 Vaarsuivius!! I love them so much!!

[i.d.: a collection of digital drawings of Vaarsuvius from the webcomic Order of the Stick. they’re an androgynous elf with light skin, dark eyes, and purple hair, and are wearing a red robe and cape. one drawing is a detailed semi-realistic image of them sitting at a counter, drinking, with a pensive expression. another is a scribby picture of them being really hecking scary, aka channeling their arcane energy at the viewer. another is a cute chibi doodle of them trancing with a smile on their face, with Mr. Scruffy (a white cat) sleeping in their lap and Blackwing (a raven) sleeping on their head. another is them speaking with a happy expression in the comic’s art style (meaning they’re a detailed stick figure). the final drawing is a five-second doodle of them making a :3 face. end i.d.] 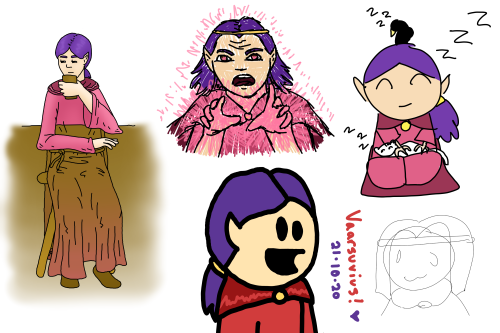