felix: I was trying to be vegan, but my pizza has meat on it

Samus: Come on! You can be with the girl of your dreams!

Zelda: If my dream is ME not getting kidnapped…. aren’t I the girl of my dreams?

felix, leaving the room: im gonna get another slice

jisung: I believe in you!

chan: whats he trying to do???

Chat Noir: I wanna get a brain scan.

Ladybug: But what if it comes back negative?

#Ah yes more from the life of me, #I'm sorry it was too funny not to use, #To me anyway, #But yeah these are the conversations I have with my mother, #That said, #Chat Noir, #Ladybug, #LadyNoir, #Miraculous, #Miraculous Ladybug, #ML, #Lawbreaker, #Source: Original
179 notes · See All
incorrectkidsText

minho to jeongin: don’t tell me what to do you little toddler

Peter, at court: In my defense, your honor, the situation simply didn’t pass the vibe check.

Tony, screaming into the script he wrote for Peter:

Aries: Laughter is the best medicine,

Aries: …Except if you have lung cancer.

Batman likes to drop random (fake) personal information to shake the other Leaguers off the scent. They can’t tell when these random facts are coming and it’s got to the point where no one is sure what’s true anymore

Batman: ah, this makes me feel like an young man of 45 again

Batman: growing up in Thailand—

Batman: this looks like my grandmother’s ring that she smuggled out of Soviet Russia in my mum’s stomach

GL: who did what where now?

Batman: I bequeathed a similar clock to my great-nephew for his daughter’s birthday. Interestingly, my father actually found it when he was shipwrecked in the Pacific while trying to find Amelia Earhart’s body

Jason: children however, are demons

Tim, being chased by a katana-wielding Damian: I know

Jason: do you speak Spanish?

Dick: not a word

Dick: what was that? 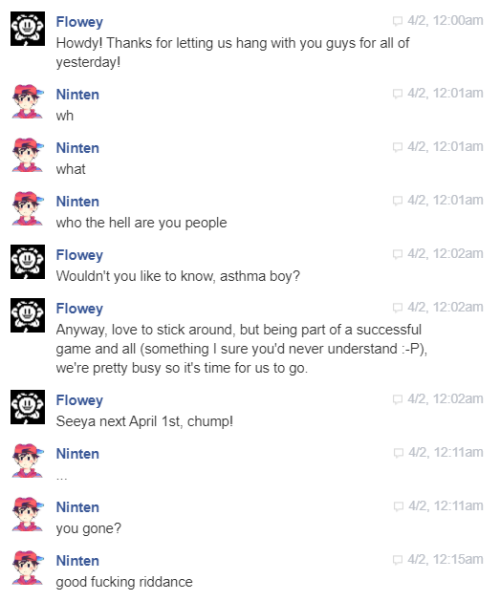 Goro: I wish I stopped.

Ren: Oh that got dark rq-

Tim: you know, whenever I see Damian sleeping, I think “I could do it.”

Jason: what? Smother him?

Tim: no, get along with him

Jason: and whenever I see a sleeping lion, I think “aw how cute”

Jason: but then I remember that this is a lion and I should not go anywhere near it

Blixer: I’m what you call a ‘war criminal’

Marinette: THERE IS SO MUCH GOING ON IN MY NOTIFICATIONS RIGHT NOW I CAN’T BREATHE

Marinette: I HAVE NEVER KNOWN HOW TO HOLD A TEXT CONVERSATION

Marinette: PRETTY BOY REPLY HOW DO I MAKE HIM NOT DISAPPEAR

changbin, walks past a mirror: damn i look good