I’m so in love with my little greenhouse.

Idk it is a species I made .not real

The Siamese crocodile is a critically endangered species. It is a medium-sized, freshwater species native to South-Eastern Asia, with a smooth snout and a bony crest behind each eye. Members of this species are generally not aggressive, with only five recorded incidents of attacks against humans. They also feature prominently in the folklore of Central Thailand.

Alien and beautiful, creatures from another realm who have made a home in ours, even if it means drawing blood. The Fae, like the world they come from, are strange and mysterious. They are governed by a set of rules and morality that is altogether different from the other species. They are ruled by two separate courts, who vie over control of humans. Their rivalry isn’t mean, at least not to them, but it can become vicious; in the same way, the fae mirror this concept. Humans are often caught in the crossfire of their age-old game.

The most famous of tricksters. Don’t give them your name. Don’t follow them into the forest. Don’t listen to their lies. Even the kindest among them are dangerous.

Not much is known about the origin of shapeshifters, even to themselves. There are accounts of them through the ages, most widely considered to be true fantasy because shapeshifters rarely reveal themselves. Around the world many of these beings prefer to keep to themselves, but, in recent years, a few have begun to interact more with other supernatural communities.

Ernst Haeckel was a German biologist, naturalist, philosopher, professor and artist. Ernst Haeckel is credited with categorizing thousands of species, creating a genealogical tree that unites all life and coining the world “ecology” and it is famous among “non-scientific world” for his stunning illustrations. 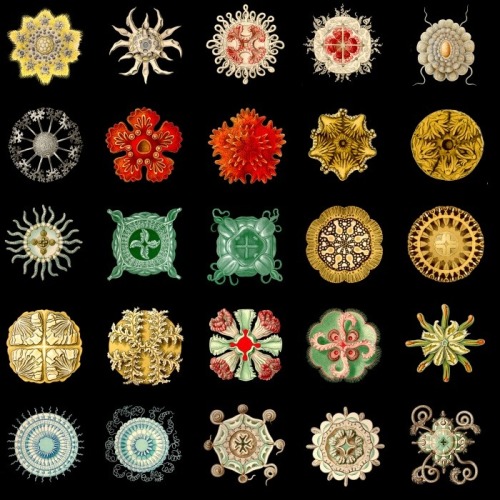 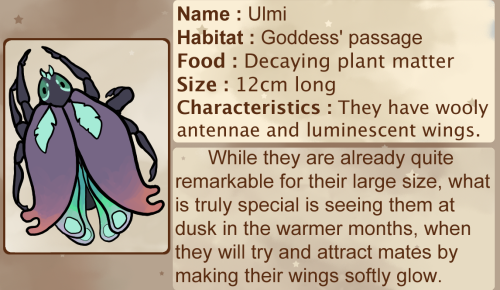 Only the oldest of creatures remembers a time before vampires. One might assume that there is no place for cursed beings with an insatiable thirst for blood among polite, modern society, but… the rules of engagement differ in Lyonesse as compared to the mortal world, where vampires must hunt in the shadows. The city is one of very few with an economy for vampiric sustenance, having legalized blood as a commodity for sale and consumption in licensed establishments.

Silicates, or as they call themselves, the R’lohr are made of material physically similar to that of silicone. They usually lack pigmentation and resemble those with albinism, but instances have been known to colour themselves. R’lohr resemble humans except they lack mouths. To compensate for this, R’lohr communicate through touched-based telepathy.

Rl’ohr possess a crystalline brain, this brain can remain active outside the body until the brain is itself destroyed. Brains, however, cannot transfer to other bodies of different materials. Brains have been revealed to be able to connect with electronic devices via direct contact with outlets. Speculation is that the material they consist of is a type of electro-conductive polymer.

How beautiful is this monkey? 💚

“The red-shanked douc is a species of Old World monkey, among the most colourful of all primates. It is an arboreal and diurnal monkey that eats and sleeps in the trees of the forest”. Wikipedia

Utuabzu: Life does not evolve in a vacuum, every creature has evolved to fill a particular niche in a particular ecosystem. Should that niche disappear, if there’s time, species often evolve to suit a new niche, and would retain features that while no longer making them better suited to their niche, aren’t impeding their success in their new one either. As for making things unique, looking at real world animals, and real world evolution, nature tends towards convergent evolution as the most efficient solution is always going to be the most effective and thus produce the most offspring. An excellent example of this is Carcinisation, the tendency of arthropods to evolve into a crab shape. No less than ten separate evolutionary lineages have done so. Consider the environment, the niche the creature is filling, and then look at what creatures on Earth are filling a similar niche. The most likely alien organism is probably going to look somewhat similar, but you can have fun with it. Try looking in particular at island ecosystems, Australia, and palaeontology - especially as regards the precambrian, cause things were really experimental then. Remember, reality is usually stranger than fiction.

Ebonwing: Ultimately, you’re right: Nothing is original. Trying to come up with something truly original in the realm of fantasy and science fiction is generally a fruitless endeavour. Someone somewhere probably did something similar to whatever you come up with already. That said, you’re not doomed to recreate the ideas of other people either. Utuabzu already laid out how to use real life evolution, ecosystems and adaptations to find inspiration. I’ll add that you can also go the reverse for your writing: if you come up with something cool, you can change your alien environments to fit it.

Tex: As a counterpoint, you don’t have to be original - what you have to be is interesting, and that relies on things like plot, setting, and general writing skill. Trying to substitute a shiny idea to entice readers tends to fall short to a skilled writer working with recognizable ideas and tropes.

Day19 Sil from Species by DannimonDesigns

Known as test subject S1L (“Sil”), she was formed from the fertilization of a human ovum with alien DNA. Sil was raised and monitored in a controlled lab environment until the scientists studying her attempted to kill her. Escaping her confines, she broke out into Los Angeles where she evolved and fell to her alien instinct to find a suitable male and mate; becoming an intelligent but hyper-sexual predator.

For day 19, instead of making her menacing or threatening, I rather make her look cute and playful. Lying on the bed with some alien plushies to play with. Maybe if they gave her these she wouldn’t have been so angry eh?

Did you know the NWT Wood Bison are Threatened? Brought to you by Kary M…

Synth: The first thing this brought to mind for me is an episode of a ‘90s TV show called Kratt’s Creatures (anyone else watch that?) called “The Best of the Best”, where they were trying to do exactly what it says on the tin, and determine which animal was the best. What it all came down to is no one animal is better than any others; they have their specific niche where they excel, and other areas where they can’t hack it at all.

A cheetah can run very fast. A sperm whale can dive very deep. A cheetah can’t swim worth beans, and whales don’t even have legs anymore. Is a cheetah superior because it can run? No, but neither is it inferior because it can’t swim. A tall person isn’t inherently better than a short person just because they’re tall, but there are specific areas where being taller makes them more likely to succeed at a given objective.

“This species is better than this other species.” Okay, but better how? Why? By what benchmark is it being judged? There need to be a few specifics, else calling something “superior” is just unhelpfully vague.

Ebonwing: I suspect the intended meaning was that aliens in science fiction often tend to be in a superior position in terms of military, economy or both; having superior weapons, being able to manufacture materials that are simply better than what humans in the setting have, that kind of thing. Like Synth already said, this doesn’t make these alien species inherently superior, though.

(The “humans are space orcs” meme is a pretty good example of that. In those story snippets or idea blurbs, the aliens are also usually more technologically advanced, but fail at adapting to earth, unlike humans. They’re better at one thing, and worse at another.)

The reason why this happens so often is, I suspect, because humans in sci-fi settings are the protagonists more often than not, and most writers will find it more interesting to write from an underdog perspective. So you’re right, this is more about the plot people want to create than some kind of inherent worldbuilding principle.

The second reason is probably the ‘rule of cool’. Let’s be real, aliens with hyper-advanced laser cannons and whatnot are fun to work with.

Utuabzu: Your basic rule of thumb with biology is that each species is perfectly adapted to their ecological niche, and every feature of their biology serves, or once served, a function in helping them fit said niche. Humans became bipedal as a response to the conditions of a savannah, rather than the forests their ancestors had inhabited. Similarly, we lost hair, evolved darker skin, and sweat as a response to the hotter, sunnier conditions, which made us great at keeping cool in warm, dry environments but pretty bad at thermoregulation in others. We also evolved to have larger brains and higher intelligence because that was a useful trait for a relatively small omnivore who was both predator and prey. One relic of this is pattern recognition, as a prey species we evolved to identify visual patterns in order to spot camouflage predators, and to over identify because better paranoid than lunch, consequently, our brains still see patterns where there aren’t any, like in the stars or in clouds.

With aliens, think about their environment and ecological niche. What the neat feature you want to include is an adaptation to. And then remember that what makes a species more suitable for one niche usually makes them less suitable for others.

Constablewrites: I would venture that in a lot of these “humans are inferior” stories, the humans are relative newcomers to spacefaring while the aliens are more experienced. So it’s not that the aliens are “superior” (a word that implies value judgment and so should be used very carefully), it’s that they’re more advanced in this particular field.

Dynocation are a eusocial species of amoeba.
They come in various colors, but at a maximum are two colors.
They can sometimes have multiple arms and wings.

Some are based on mythological characters like
Yahweh, Thor, Zeus, and more!

They have the intelligence of a human, if not a little more.
They exist in a dimension that humans can’t physically see,
but sometimes they travel into the realm humans can see,
of which shennangins happen.

You got your good boys, you got your evil boys, and your wacky boys.
All dynos are a well designed dyno. >:c

Heart and Reblog To Help This Page Spread Around!
Thank you! 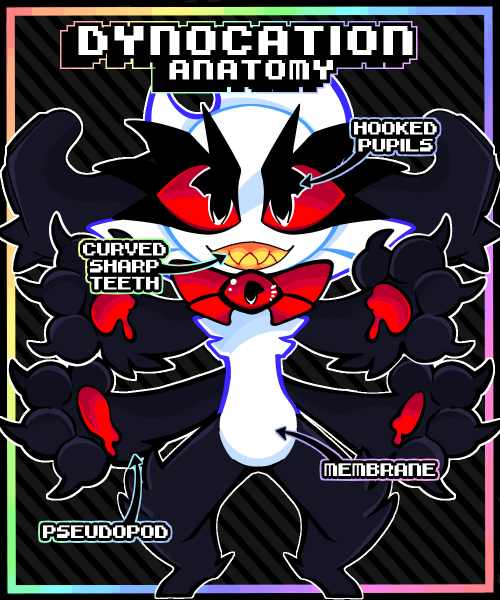 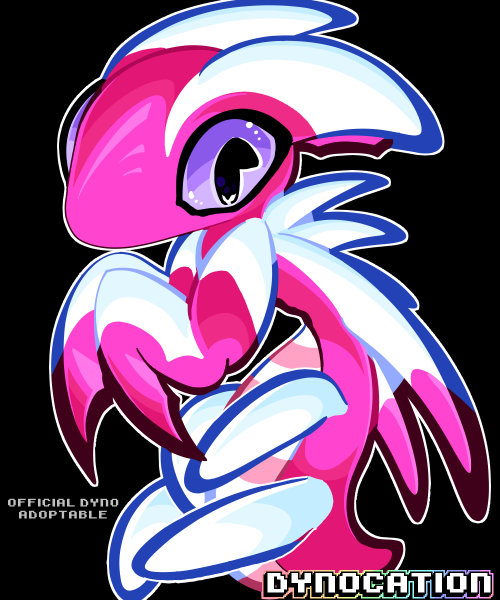 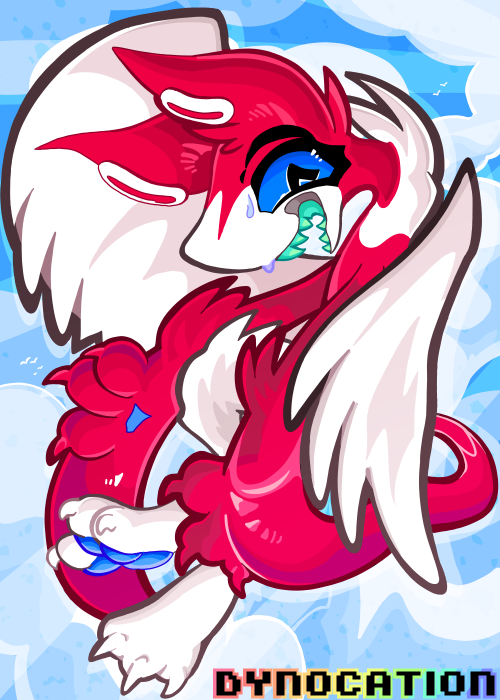 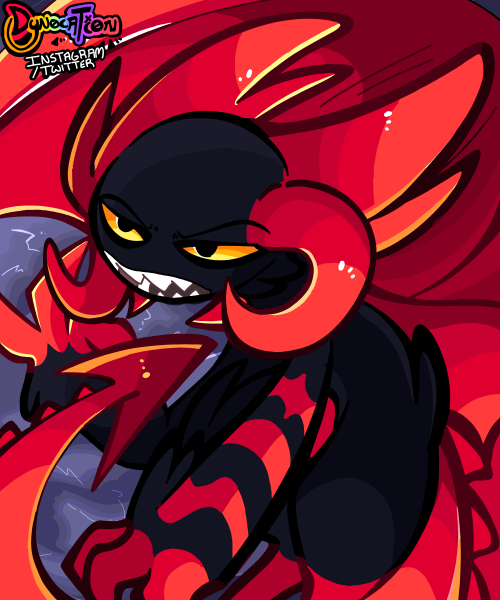 I remember the lady in the sea of trees,
Oh how she danced with blue fairies.
Soon shall she be the deus ex machina
For every single species of fauna and flora.

Our initial species list includes: dragons, fae, humans, merrow, phoenixes, psychics, shapeshifters, vampires, werecreatures, witches, yōkai, and a selection of hybrid species that will be explained in their own section.

On Lyonesse, playable species must have a predominantly human(oid) form. With the exceptions of dragons and “phoenix”-type creatures, whose human forms are granted via magic, we will not currently be allowing species that have mythological monstrous forms (i.e. griffins, sea monsters, yeti, etc.) and would have to take a human form to interact with the site. Part-humans will be considered on a case-by-case basis.

It’s perfectly likely that these creatures do exist, as our lore is open and ever-expansive. It is also likely that there are creatures of non-human semi-intelligent origin, such as unicorns, which will never be playable on Lyonesse due to our specific urban setting and focus on supernatural society. These creatures may be encountered in the wild, but they don’t often form groups or specifically interact with more human(oid) supernatural beings or mortals. 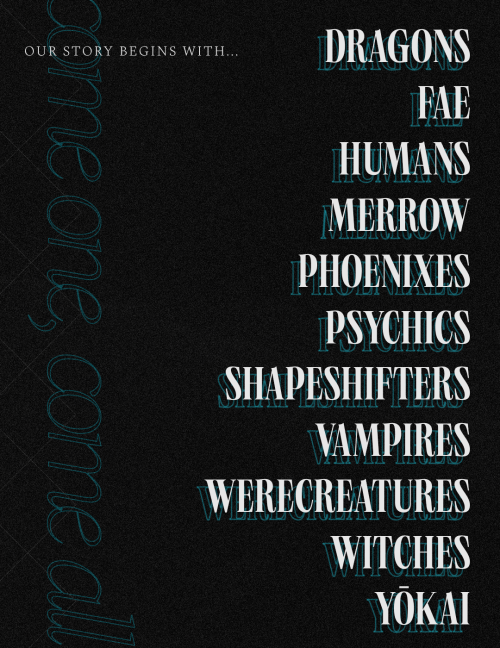