Ok, this is so damn sad. So, Peter realized in FFH that giving away the glasses to Quentin wasn’t the smartest idea but, at the same time, he knows the next Iron Man would have never done that, which means that EDITH is not made for him (at least in his mind). It takes him longer than he’d like to admit to realize that the only person Tony trusted with his life the exact same moment they meet him is Dr Strange.

Which means that he can entrust Tony’s control to Stephen Strange. Because, you know, Tony trusted him, and Peter trusts him too (way more than Tony used to). Stephen doesn’t want to. Let’s say that this is a universe where not only he fell for Tony, but where he has a good relationship with Morgan and, for this reason, Pepper can’t stand him considering him responsible for Tony’s death (just because I’m salty at Pepper 24/7 and I love the idea of Morgan being a little ray of sunshine in everyone’s lives. But when Peter tells him what happened in Europe, Stephen decides it’s for the better.

What Peter didn’t tell him is that he can basically use the glasses to control everything Tony created and that the AI inside of them is like a sort of Tony. Stephen is curious, he might not seem like this but he needs to know and he’s only willing to know more about those glasses so he decides to wear them. And he’s extremely surprised when the first voice he hears is Tony’s telling him that the kid would really trust whoever has a nice goatee.

Follows sleepless nights of astral projected Stephen and AI Tony speaking about everything and nothing until it’s time for the Sorcerer Supreme to be a productive human being once again.

Now, that’s a little headcanon. For the more canonical version, let’s just say that I'd like to see this, but as I mentioned yesterday, this would put Stephen in a focal position in the Spiderman movie, a position which I highly doubt he will be in. (To explain it better, I expect Stephen to have the same screentime Tony had in Homecoming instead of the one Happy had in Far From Home). That said, it would totally be excruciating for both Stephen and Peter to have to make that conversation about Tony and, most importantly for Stephen to somehow have the opportunity to speak again with Tony.

For once, I’m kinda happy RDJ won’t be, not even as voice actor, in this movie because my heart wouldn’t be able to take it.

First off, Chapter  4 will be out tomorrow!

This chapter is full of sad feels so prepare yourselves

Second, I was thinking that I might do a couple “bonus scenes” so like one-shots or headcanons that would fit between Chap 4 and Chap 5.

I was thinking of something more joyous because shit is about to go down.

So if you guys have any requests or ideas just send an ask!

It can be Peter x Reader. Or something platonic between the reader and the Avengers.

SPIDER-MAN: HOMECOMING (2017)
song: “Save It for Later” by The English Beat

Spider-Man: Home For a Rest - Peter Parker goes to visit family in Canada

Spider-Man: Homesick - Spidey deals with the aftermath of the pandemic

Spider-Man: Homeslice - Remember all those times you saw Spidey with pizza? Like that but more.

MJ recommends a scary movie for Peter to watch, and of course he had to try to show off to her even if he doesn’t do well with certain horror stuff. Turns out it wasn’t gonna be an easy feat.

Hey guys so my bff wrote this piece and I helped her with a lot of the details. Let us know what you guys think.

Peter: [in a zoom class]

Teacher: Peter can you unmute, please.

Peter: [unmutes the call] sure-

Steve, in the background: HER SISTER WAS A WITCH RIGHT? AND WHAT WAS HER SISTER? A PRINCESS! THE WICKED WITCH OF THE EAST BRO! YOU’RE GOING TO LOOK AT ME AND TELL ME THAT I’M WRONG- 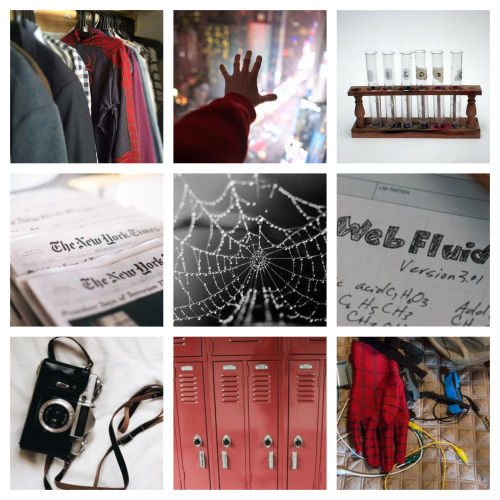 Spider-man teams up with horror

OMG GUYS, DO YOU REMEMBER WHEN WE MCU FANS WERE ALL CAMPAIGNING FOR NIGHT MONKEY TO BE THE NEW MCU SPIDER-MAN BC WE THOUGHT MCU SPIDEY WAS FOREVER GONE???

Okay hi. I’m kinda new to the marvel fandom side of tumblr, and I don’t know how y’all are gonna react to this. Here goes nothing:

I have huge problems Peter and MJ’s relationship.

I get it, “it’s Peter and MJ they’re supposed to be together” but it really just doesn’t make sense, and for a few reasons.

First off, Peter just went through a huge loss, and is visibly struggling throughout the movie. Yet, the first thing we see from Peter is him fawning over MJ. I didn’t know how much time passed before Far From Home so I googled it. I figured maybe an entire school year passed and it was a developing feeling, but NO. Look at this: “Sony producer Amy Pascal, who serves as producer on the studio’s ‘Spider-Man’ movies, told Fandom in June 2017 ‘Far From Home’ takes place directly after ‘Avengers: Endgame.’ “

Virtually zero time has passed and Peter is already infatuated? Um, no. I would have been fine if some off-hand line had been made about how “he’s always had a thing for her” but there isn’t even that. We go from seeing Peter with red, teary eyes and probably depressed (end of Endgame) to, apparently, crushing on MJ. I just don’t see how that would happen.

Not only does the timing make no sense, it also doesn’t make sense character development-wise. From what I saw in Homecoming, MJ seems to have a brother-sister dynamic (bickering/insults) and they aren’t even that close. The first thing we see from MJ she calls him a weirdo. Now I know, some of you will say “she calls him a weirdo because she’s hiding her feelingssssss” but that doesn’t seem like an MJ thing to do. She’s so stubborn and to the point that she probably wouldn’t bother hiding how she feels, even if she can be considered an outsider.

Half of the time MJ’s insulting or throwing Peter the finger. However, there is one moment when MJ looks back at Peter (I believe it’s when he runs out of the dance) that made me consider her feelings but, I think it’s something different. In the comics and other media forms of Spider-Man, MJ is a journalist. I think that the newer movies are playing into the fact that she is naturally observant and a bit of a snoop. She probably knew (even though it wasn’t a secret) that Peter had a huge crush on Liz and wouldn’t run out for no reason. MJ was probably curious about what that reason was.

From my personal experience with loss, losing someone really important makes it hard to focus on other emotions. When I lost my grandmother, I became virtually numb. I hid the fact that I couldn’t really feel anything by reading books. Peter is a very openly emotional person, so much so that he can let it get the better of him. Tony was a really important person to Peter and you can see how much Peter wishes he were still alive. If Far From Home takes place right after Endgame, then wouldn’t he still be lost in that emotional bubble? I think he is, and he’s using his “crush on MJ” to hide the grief. So essentially, MJ could an emotional rebound.

I don’t have anything against Zendaya, in fact, I love her acting! But I think the relationship with Peter broke her character down to a lower, basic teen girl level that she didn’t have before.

I’m probably gonna get hate for this, but it really just doesn’t work for me. Maybe someone already said this and I’m singing an old song, but it felt like a thing that I wanted to get out of my head.

If you have something you want to add of disagree with GO FOR IT! I’m trying to use my blog to generate responses, good and bad!

I think MJ and Spidey worked together exactly once and that was in Grand Central against Li. I mean they also kinda worked together against Sable in the Oscorp tower but I don’t think that really counts because Peter only jumped in at the last second.

BUT anyway!!! I enjoyed them working together. Being able to direct Spider Man to take out enemies was nice. But that was only once and the rest of the stealth sections were just excruciatingly painful.

I think it was frustrating because there was no one to take anyone down and giving MJ a taser was really nice in the last stealth mission. I think that helplessness was part of the narrative though- that MJ and Peter needed to figure out how to work together. MJ dies/is caught too easily because she’s is a regular human being, but she also has the ability to make Spider Man take downs more efficient such as in the Grand Central station scenario.

I get it, the point they were trying to make (and they did it very well) was that they had to work together- that MJ had to realize she could be a liability and that Peter had to realize that she was capable of helping him out… but also yeah, I want to play as spider man XD

#spider man ps4, #spider man, #peter parker, #mary jane watson, #anon, #ask, #anonymous, #sorry for the info dump oh my gosh, #i just really like the game, #even tho the stealth missions drive me crazy, #thank you for the ask ahhhh, #i just finished the game and I’m ready to scream about it honestly
4 notes · See All
aesthetic-carleyText

This is the money-making shot right here, boys!

#Ultimate Spider-Man, #Ultimate Spidertober, #spider man, #spider-man, #spiderman, #spidertober, #peter parker, #marvel, #marvel comics, #spot, #lava lamp, #roxxon, #earth 1610, #inktober2020, #inktober, #ink, #illustration, #alberto navajo, #spidey villain, #pentel
7 notes · See All
ironstrange-is-the-endgameLink
The void is calling - cutebutpsyco - Multifandom [Archive of Our Own]https://archiveofourown.org/works/27103381
I had this idea for a fic where there are 100 Peter Parkers in the room. Tony has to find the real Peter Parker before times runs out or he dies. Thats honestly as far as my idea goes. If you would be so kind to tag @stolenavalanche on Tumblr when you post, I would be grateful

I’m so sorry for the long waiting, but my inspiration as been really hard to get in touch with recently. I hope you’ll like it and thank you so, so much for commissioning this fic <3

Are you guys liking all of the live action SpiderVerse buzz going around?🕷🕸🕷🕸🕷🕸