A psychological thriller about Lou Bloom, a man so desperate to be a part of the crime journalism world that he begins creating his own prime time stories.

The first thing we see Lou Bloom do in this movie is attack a cop to steal metal he can sell for change, then go on the most bold and embarrassing rant about why he deserves a job from the guy he’s trying to shake down for cash.

From the very first moment, his expressions, his way of speaking, his entire demeanor, are downright creepy. Which I think is a testament to how great of an actor Jake Gyllenhaal truly is. Honestly, Jake Gyllenhaal could stand still and do absolutely nothing and it would still scare the crap out of me.

You spend the entire movie watching Lou do increasingly insane and criminal things in order to get his story the prime time spot on the news, from breaking into a house before police arrive so he can record fresh corpses at *just* the right angle, all the way to tampering with a van so it would wreck or waiting until two men were in a public area to call 911 in hopes of capturing a shoot-out on camera.

While at the same time he’s doing all of these crazy things, not only are you growing more frightened of him, you also find yourself rooting for him. The whole time he was at the house in Granada Hills, I was internally screaming “Hurry, get out before the police catch you!”

I also spent the entire movie internally screaming “Rich, quit your job before Lou kills you!” to no avail. I saw it coming, but it still hurt. Riz Ahmed’s performance as Rich was compelling. I rooted for him above everyone else in this film, although I don’t think the intent of this movie was to make you root for anyone in particular.

I think it’s meant to show just how far people in the TV and news industry go to get their stories first. Specifically, Nina Romina, who at first you think is a fairly normal person (and I don’t know about you but I felt scared for her when Lou spouted off his blackmail list of demands over dinner), but I soon realized she was just as crazy as Lou. He would do anything to capture the ‘money shot’ and she would do anything to get it on air. They made a perfect pair.

Very few movies do I ever like enough to rewatch, and even fewer are thrillers, but this was an interesting experience.

I give this film 4 out of 5 stars and I would recommend it to others.

Congratulations to this AMAZING EMMY WINNER🏆🌌👑🎉

a/n: i haven’t published smthn in a while because i have a hard time writing fanfic when i’m in a relationship bc it jus feels weird for me but i’m gonna post some of the stuff i write throughout the day n stuff on here :)

He’s the sunlight that floods through your bedroom window in the early morning, warm and pure. His smile is the sound of rain, his touch like water blessing the earth after an unforgiving drought. With a voice powerful enough to part clouds in your mind, ‘I love you’ has never meant more. You can feel the solace in his presence, a certain tenderness found in the safety that blankets your form. He breathes new life into the word ‘home’, comfort woven through his seams. Falling into him leaves your stomach flipping, the routine ache that overcomes your chest at the thought of vulnerability, somehow, overruled by wholehearted adoration. All fear dissipates when his skin touches yours, bodies intertwined while the pounding of his heartbeat resonates through your mind, bringing an unfounded sense of serenity. You’ve waited for him, and now that he’s finally here, you never want to let him go.

#Quentin Beck, #Mysterio, #Jake Gyllenhaal, #Spider Man: Far From Home, #fanart, #digital art, #my art, #I remember when I first drew him and I figured I’d simplify his outfit, #Whoops!, #And yes made the fishbowl helmet transparent, #Because duh
24 notes · See All
frank-roughroad-castleText

Reasons why The Punisher (Jon Bernthal) should be in Spider-Man: Homesick

When I heard that for the third movie of Spider-Man a new hero will enter the MCU to help him, I immediately thought that it should be Frank Castle and here are my reasons:

• It would help Peter learn to become independent from the Avengers.

It is a topic that many debate, the vast majority of viewers are irritated by how dependent Spider-Man has become on what The Avengers do or not do and also because of the help he receives from his friends (Happy, Ned, MJ ), I can very safely say that if Frank helps Peter with his current difficult situation, he will learn how to work alone as he did in the second season of The Punisher with Amy.

• Frank Castle is a very easy character to add to the MCU.

Why am I saying this? Because Frank is a ghost (not literally), he is always hidden in the shadows and only performs on the streets. The Punisher, being a controversial character in his own history, makes no one talk about him, everyone saw him, everyone knows who he is, what he did and what he is capable of, however, not even the FBI dares to look for it.

They have made a movie together, they know each other and they clearly get along well, that is a great advantage when filming. They both helped each other when it came to playing their Marvel characters.

You could see the previous said in the second season of The Punisher, since from the first chapter he protects Amy.

• Punisher would help the development of Peter Parker as an individual character.

By putting Frank Castle in Peter’s way, development and maturity as a character could be achieved by having to witness and experience the worst side of humanity, Frank would help him in his effort to survive and could even protect him.

• The Punisher is the perfect ally against Kraven the Hunter.

As the vast majority will know, Kraven was confirmed as the main villain of Spider-Man 3: Homesick, and honestly the best ally Peter can ask for is Frank Castle, Kraven is a man specialized in hunting and weapons, Frank would be it is very helpful since he knows military techniques, how to treat gunshot wounds and how to deal with a man specialized in weapons.

• Placing The Punisher would be the cue for dark plots.

What am I going with that? I say that since it is a serious crisis in Peter’s life with Frank Castle, a man who has gone through hell and has returned to take revenge, it can help when Spidey has to make difficult decisions, because if someone other than nobody knows about difficult decisions that is The Punisher.

When will one of my friends get superpowers so I can assert my god-given right to be their guy-in-the-chair?

so like,,,,,, what is happy stitching??? is he sewing through the shirt?? it doesn’t look like he’s pulling down the shirt, and the neck of it doesn’t seem low enough to stitch anything

he wasn’t finished when Peter got up,,,, was there just a needle hanging off his back?? the entire time he was talking?? and he just didn’t notice?? or he did but was too angry to say anything?? I feel like that would absolutely poke into you if you moved as much as he does in this scene

New Peter edit, because he is perfect, and super badass.

if you’re interested in seeing manips (i’m looking into doing a variety of different ones like hariana, harry and zendaya, tom and harry, etc. i used to primarily do tom holland and ariana grande manips), please check out my instagram @spideyjawn (don’t question it i live right outside of philly)!

here are some examples of past manips:

i’m currently asking if people want dedications, so if you respond to my story on there then chances are you’ll get tagged!

i used to be hella active on there months ago and am just now getting back into the groove of it and would like to make this comeback the best it can be so please give my account some love ! I’m watching Spider Man: Far From Home with my parents, and it’s honestly painful how stupid some of these characters/plot points are. 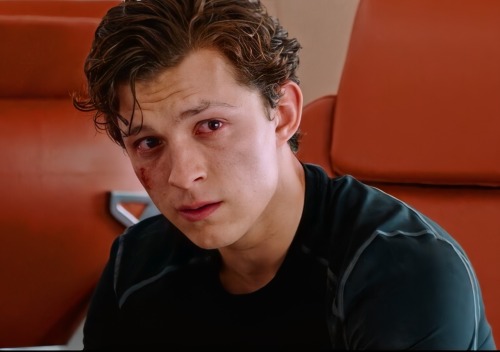