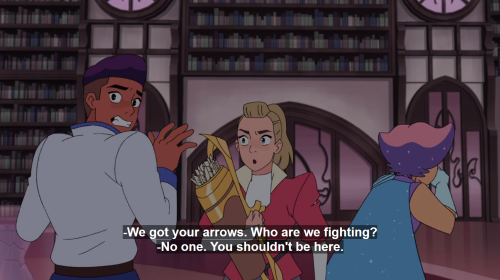 Sure, it’s funny that Bow doesn’t know what Spinerella and Netossa do, but you know what’s funnier?

That he says it while literally standing in front of A FREAKING HUGE MURAL SHOWING EXACTLY WHAT THEY DO!!

Catching up on @spop-palentines days I missed, I added a new chapter of my ongoing fic, Glowing Up for the prompt Friends Across Generations.

In this bit, 7 yo Bow has a heart to heart with his oldest brother, Dirk, and the two come to an understanding.

Have you ever wondered exactly how that whole made-up school, lying to his dads to join the rebellion thing started?

How Bow was sneaking away for years without George and Lance knowing?

Exactly what the heck was the deal with all those siblings?

This fic is that story!

I made the Glimbow kiss from Episode 3 of Acid Cake’s She-Ra PoP x Steven Universe CROSSOVER into a GIF because I could. 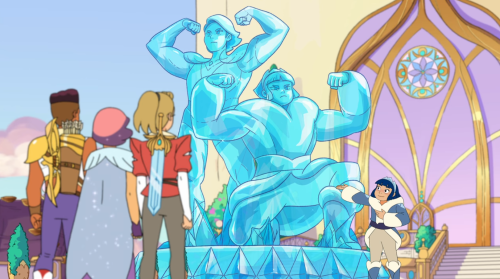 aight i’m back on my shit with She-Ra and also with a concept.

Adora retires from She-Ra after Finn’s born, and I’ve had this character in my mind since I first heard about Finn.

Aight so Finn has a sister that’s 10 months younger, and looks like a mini-Adora but with Catra’s feline features and skin tone.

When Finn and Nara are somewhere around thirteen/fourteen, they both find Adora’s She-Ra sword. They’ve both heard the stories. They both know they won’t be able to activate the sword, but just for the hell of it, both of them give it a go.

(Adora’s pregnant with their little sib at this point, and is napping on the couch with her wife)

For Finn, nothing happens.

For Nara, the exact opposite.

Both of them scream.

Catra busts into the room, eyes wide as hell, and immediately curses.

Adora follows, and is just so many levels of Why god.

Finn: *is just in shock*

Nara: Why are you looking at me like that? Did something happen?

Catra:*Bursts in* *in full parent mode* WHAT HAPPENED

Finn: We were joking around and-

Nara: I said the thing, and-

Adora: *waddling over* *Sees She-Ra* *Shares a look with Catra*

aaand I used a meiker thingy for She-Ra Nara and regular Nara.

Plus the idea of Nara has been bouncing around my head for a while, specifically this little scene:

Nara had been pacing the room for what felt like hours, the damned sword slung across her belt. She didn’t understand. The Horde was defeated years ago, so why was another She-Ra chosen?

And why not Finn? It didn’t make sense, they were the oldest child of the last She-Ra. Nara was just the second born, soon to be middle child. Finn would have made sense. They looked exactly like She-Ra, whereas Nara was just a thirteen year old girl that had a knack for baking.

She-Ra was supposed to be good at fighting. Nara could barely pick up a sword, and she’d threatened Swift Wind more than once with poisoned apples. (That horse never knew when to get out of the kitchen. He had it coming.) The one time she’d picked up a bow, she’d almost shot her Aunt Glimmer. Not to mention the magic incident when Aunt Glimmer’s dad tried to teach her a simple defensive spell.

It took a month to undo the damage to that room in Bright Moon.

And those were just the recent incidents. Finn, on the other hand, was a deity with a sword, and everything Nara wasn’t.

After the incident, her moms had taken to their room, leaving Finn and Nara alone in the closet. (Ironic considering Nara still hadn’t told them she was bisexual.)

They hadn’t said a word, but Finn had picked up the sword and handed it to her as he left, so Nara didn’t know what to think about their reaction. She’d imagined that they were as struck as she was about the whole thing.

Nara knew exactly how her parents felt the next day, though, because they knew how to make their feelings clear. Not consciously, but whatever. She knew exactly how worried they were because they’d told Nara and Finn to pack enough clothes to last a month or so because the family was heading to Bright Moon.

So she did. Nara made sure to stuff some extra powdered sugar in there, too, because Nara and her Uncle Bow were the only ones to actually use the kitchen in Bright Moon, and there was never enough powdered sugar. Plus, her period was on it’s way, and strawberry sweets were always a must during that time of the month.

They’d all left their little home in the outskirts of Aunt Perfuma and Scorpia’s kingdom and trekked to Bright Moon the next day. No one mentioned She-Ra, even though Finn was a little less enthusiastic, Mom looked way more stressed, and Ma was more skittish than usual.

So, yeah. That’s how Nara found herself pacing around the guest bedroom she’d been using, sword at her waist. Nara really wanted to bake something, but she’d seen Aunt Glimmer and her Mom in the kitchen, and she really didn’t want to interrupt.

Someone knocked on the door, snapping Nara out of her mind for a moment.

Nara heard the door open, and her Ma’s claws rapped lightly on the ground as she approached. “You alright?”

“Don’t know yet,” Nara stated, looking down at the (somehow bright pink) floor.

Ma rested a hand on her shoulder. “I know this whole,” She made a wild gesture. “She-Ra thing is a lot to deal with, but it’ll get easier.”

“I’m thirteen.” Nara stated, dead serious. “I should be studying, or having fun and being a kid or something. Not She-Ra.”

Ma sighed. “Your mother said the same thing after it happened, you know. We wanted you two to grow up without She-Ra or fighting or any of that.”

“Too bad it didn’t work,” She said bitterly. “Now I turn into a six foot tall princess”

Her Ma laughed a litte. “Yeah, but that just means you can do it, not that you have to.”

“Mom said She-Ra only appeared when she’s needed,” Nara pointed out. “How can I ignore it?”

Ma smiled softly. “You don’t have to. One thing we learned when we were your age is that you can choose to fight, but you never have to.”

“I’m not ready to be She-Ra.” Nara declared. “Not Mom’s kind of She-Ra anyways.”

Ma rested her arm around Nara’s shoulder. “Don’t be, she had serious issues.”

“For now, I just want to bake my little heart out.” Nara smiled. “Train a little, and eventually I’ll be ready.”

EDIT: THIS IS NOT MY ART!!!!! I USED https://meiker.io/play/11592/online.html THIS MEIKER TO MAKE IT!!!! I JUST WROTE THE THINGY AND HAD THE IDEA FOR THE WRITING THINGY

Honestly, I’m never not going to cry over Bow’s speech for the Rebellion in the last episode.

Prime is probably trying to get his channel back right now, so I have to make this quick.

Prime’s controlled the universe for a long time. Right now, we’re the only thing standing in the way of him controlling it forever. You might be feeling hopeless. You might be thinking, "We don’t stand a chance.” And maybe we don’t. Prime’s too strong. His army is too powerful. But that’s not gonna stop us. We need to show Prime we’re not afraid if him, because we have each other. And we have love.

We can’t give up. And if we go down, we go down together. We need you. All of you. It’s time to get back our world. It’s time to fight. For She-Ra, for our homes, and for each other !“

And I love the fact that’s him that gets to say that. He’s not a princess, doesn’t use magic, doesn’t have a magical cat. That’s the type of stuff you could expect from Adora, for example. But it’s Bow, and I love that because it reminded me of episode 01x06 when Bow talks to the kitchen staff.

"Sure, we don’t have powers like the princesses’. But that never stopped me, and it doesn’t have to stop you.”

“But you’re a master archer ! And we’re just ordinary people!”

“I’m a master archer who’s out of arrows. But that never stopped me either. You each have a skill that only you can do, even if it doesn’t come from some magical jewel. You say you’re just ordinary people ? I say you’re warriors of the Rebellion!”

Bow talks for magical people, but he also talks for “ordinary people”. That’s why he talks from Prime’s channel. So that all of the Etherians can hear him, so that they all join the fight. And it’s so cool !

Sure! Sorry about the delay. School has been on my back a bit. Keep the requests coming anyway, though! I’ll get to them!

Once again. If this offends you in any way, I’ll delete it. Just let me know privately. I do not intend to come off as offensive or ableist in any way with this.

Important question! If I offered commissions would you buy them? Here’s an art sample for reference. Please fill out the google form below:

I just know Sokka, Benson, and Bow would be GREAT friends like imagine the chaotic and sarcastic sidekick energy

Paper rings is SUCH a glimbow song omg

They made it and so can we ✊ 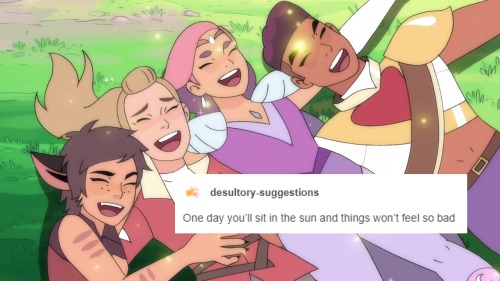 (depending on how much longer the video editing takes me) (:

Hey guys! I just posted the final chapter to my Broken Together, catraxadora fanfiction! Below is a short excerpt from the post. Enjoy!

“Adora,” her voice was raw with emotion, but steady, “I have loved you my entire life. Every second of every day, all my heart ever wanted was you. Even if my brain was telling me something else. I wasted so much time trying to ignore how much I loved you, and it kills me that we can’t get that time back. But I’m here today to make sure the entire future is ours.”

“I love you so much, Adora. You make me want to be a better person every day. You give me a kind of happiness that I never thought I could feel.”

She took a deep breath, pausing before she continued.

“The stars in Etheria are very special. We didn’t always have them, and a lot of us lived our lives, not knowing they even existed. But we felt their absence. We knew there had to be something greater than just a vast expanse of sky.”

“You are my stars, Adora. Even when I thought you were gone, that we were finished, I could still feel your absence. And now that I finally have my stars, I don’t know how I ever lived without them.”

i made this way more complicated than i needed to lol but i love it!