When his rage ends

There’s another rush of his poison flowing into my spark

Imagine Autobot Starscream calling Megatron a messed up fruitloop and the warlord is mad cause he knows he’s being insulted, but he doesn’t know what it really means! XD

Soundwave: Your future is full of struggle and anguish. Most of it, self-inflicted.

Starscream: But you didn’t read my palms or anything!

Soundwave: I don’t need to. It’s written all over your face.

Starscream: Well, now you got to see for yourselves how fortune telling is just a big, stupid hoax.

Bumblebee: You’re just saying that because you’re going to make yourself unhappy your whole life.

Starscream: That bot is crazy! My life will calm and happy and joyful!

(He roughly kicks a nearby stone, which soars into the air and comically ends up ricocheting off a hanging metal sign and striking the seeker, who had been standing breezily with his arms crossed. He covers his head in pain and falls to the ground, off-camera. Hunched over out of view, he raises a claw into the frame in protest, his tone agitated.)

Starscream: That doesn’t prove anything!

Optimus: Arcee? Are you okay?
Arcee: I’m doing fine.
Optimus: Starscream told me what you did. Or what you didn’t do, I guess. I’m proud of you.
Arcee: I wanted to do it. I wanted to take out all my anger at Airachnid, but I couldn’t. I don’t know if it’s because I’m too weak to do it or because I’m strong enough not to.
Optimus: You did the right thing. Forgiveness is the first step you have to take to begin healing.
Arcee: But I didn’t forgive her. I’ll never forgive her. But I am ready to start forgiving him.
Arcee smiles at Starscream begins walking away.
Starscream: You were right about what Arcee needed. Violence wasn’t the answer.
Optimus: It never is.
Starscream: Then I have a question for you. What are you gonna do when you face Megatron?

Optimus: This really seems like old times on Cybertron again, doesn’t it?

Starscream: If you really want it to feel like old times, I could, uh … chase you around a while and try to capture you.

(He smiles and the rest of the group laughs, except for Arcee.)

Bulkhead: To Star! Who knew after all those times he tried to snuff us out, today he’d be our hero?

Wheeljack: What’s with her?

Starscream: I wish I knew.

Wheeljack: What’s with him?

Starscream: This isn’t fair! Everyone else seems to trust me now! What is it with you?

Arcee: Oh, everyone trusts you now! That doesn’t change the fact that that you’ve helped Megatron destroy Cybertron! It’s like I’m the only one that remembers how much you hurt us!

Starscream: …What can I do to make it up to you?

Arcee: You really want to know? Hmm, maybe you could restore our home world!  Or, I know! You could bring Cliffjumper back!

Starscream: Thank you, Optimus. I’m so happy you’ve accepted me into your group.

Optimus: Not so fast. I still have to ask the rest of the Autobots if it’s okay with them. Bumblebee, what do you think?

Bulkhead: Go ahead and let him join. It’ll give me plenty of time to get back at him for messing with me in the caves.

Ratchet: Hey, all I want is to defeat Megatron. If you think this is the way to do it, then, I’m all for it.

Arcee: I’ll go along with whatever you think is right.

Starscream: I won’t let you down! I promise!

Starscream: Hey, I heard you guys flying around down there, so, I just thought I’d wait for you here. I know you must be surprised to see me here.

Ratchet: Not really, since you’ve followed us all over the world.

Starscream: Right. Well, uhhh … anyway … what I wanted to tell you about is that I’ve changed, and I, uhhh, I’m good now, and well I think I should join your group. See, I, uhhh …

Bulkhead: You want to what now?

Arcee: You can’t possibly think that any of us would trust you, can you? I mean, how stupid do you think we are?!

Ratchet: Yeah, all you’ve ever done is hunt us down and try to capture us!
Starscream I’ve done some good things! I mean, I could have killed Arcee when Airachnid tied her up, but I set her free. That’s something!

Bulkhead: He does have a point there.

Ratchet: He probably just did that to trick us. I’m not buying it.

Starscream: I can understand why you wouldn’t trust me, and I know I’ve made some mistakes in the past.

Ratchet: Like when you helped Megatron and later MECH?

Arcee: Or when you killed Cliffjumper?

Starscream: Look, I admit I’ve some awful things. I was wrong to try to kill you, and I’m sorry that I attacked your humans. And I never should have tried to use dark energon against you… Why aren’t you saying anything, Optimus? You once said you thought we could be friends. You know I have good in me.

Optimus: …There’s no way we can trust you after everything you’ve done. We’ll never let you join us.

Arcee: You need to get out of here. Now.

Starscream: I’m trying to explain that I’m not that person anymore!

Bulkhead: Either you leave, or we attack.

Starscream: If you won’t accept me as a friend, then maybe you’ll take me as a prisoner.

Ratchet: No, we won’t! Get out of here, and don’t come back! And if we ever see you again, well, we’d better not see you again!

Arcee: I always wondered what kind of person could do such a thing, but now that I see you, I think I understand. There’s just nothing inside you, nothing at all. You’re pathetic and sad and empty…

Starscream: Today this war is finally over! I promised my seekers that I would restore the honor of Vos. And I will. The road ahead of us is challenging. Years of fighting has left our world scarred and divided. But with the Optimus Prime’s help, we can get it back on the right path and begin a new era of love and peace…

Starscream: For so long, all I wanted was for you to love me, to accept me. I thought it was my honor I wanted, but really, I was just trying to please you. You, my leader, who banished me just for talking out of turn. My leader, who beat me, a small seeker, constantly. How could you possibly justify hurting me to the point I had to seek medical attention?

Megatron: It was to teach you respect!

Starscream: It was cruel! And it was wrong.

Megatron: Then you have learned nothing!

Starscream: No, I’ve learned everything! And I’ve had to learn it on my own! Me and many others were taught that the Decepticons were fighting for a great cause. And somehow, the War was our way of sharing our greatness with the rest of the Cybertron. What an amazing lie that was. Everyone is terrified of us. They don’t see our greatness. They hate us! And we deserve it! We’ve created an era of fear in the world. And if we don’t want the world to destroy itself , we need to replace it with an era of peace and kindness.

Megatron: Optimus has gotten to you, hasn’t he?

Starscream: Yes. He has.

I’m too late to this, but I wanted to try better Humanformers(?

does anyone have any recommendations of good starscream redemption fics.. 🥺👉👈

#just want someone to be nice to him so he learns how to love, #ive already read stop me and now i want morrre, #starscream, #ill vibe with any continuity but ive been thinking about, #the potential of tfp scream recently, #listen im prob an idiot i realize this but i think if anyone had bothered to show like. an ounce of kindness, #he couldve been a better bot, #just wanna see starscream be happy bro...thats it.., #yeah, #tf
8 notes · See All
crazeecrazeText

I found something amazing tonight

Feels odd to post this but !! I made this pie for my 18th birthday!! Its the 29th but im having a SMALL COVID FRIENDLY get together with four of my friends tmw! Also its maple pumpkin :)

I’m embarrassed of how long this took to make

Remember when I talked about Starscream would remain offline in Season 4 (https://swimmingcollectorreviewworld.tumblr.com/post/630542249555558400/im-gonna-share-my-theory-on-what-would-happen-to) as well as where he will be this season (https://swimmingcollectorreviewworld.tumblr.com/post/630556801696514048/starscream-in-most-of-season-four-sorry-if)

I’m just wondering on who would take his place as the ‘new Starscream’. I was thinking ‘Knockout’, but he’s from Transformers Prime so, I dunno…..

I keep watching a couple of Animated episodes every day and I must say, Starscream being able to single-handedly beat up all the Autobots is such a power fantasy after literally every incarnation that came after, it just feels good.

Despite everything else he goes through in the show.

“AND another thin–”
*CLANG* 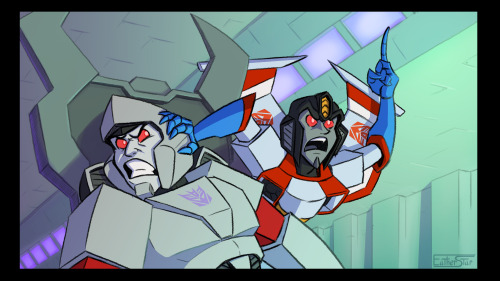