IM NOT OKAY IF ANY OF MY FAVORITE FICTIONAL CHARACTERS ARE HURT!!!!

Pals! I’m looking for AllCaps art to use for future podcast episodes. I’m also looking for artists willing to draw this ship who I can commission. If you know any - hook your favorite flame up!

…. does Tony have Steve’s shield because when Howard went to go see if they could find Steve, they could only find his shield, and so it ends up with Tony when he’s creating the new element?

Thinking about Commander Stark-Rogers today, Steve who got to spend a lifetime with Tony. He throws himself back into Shield missions to keep himself from chasing Tony’s ghost after his passing. 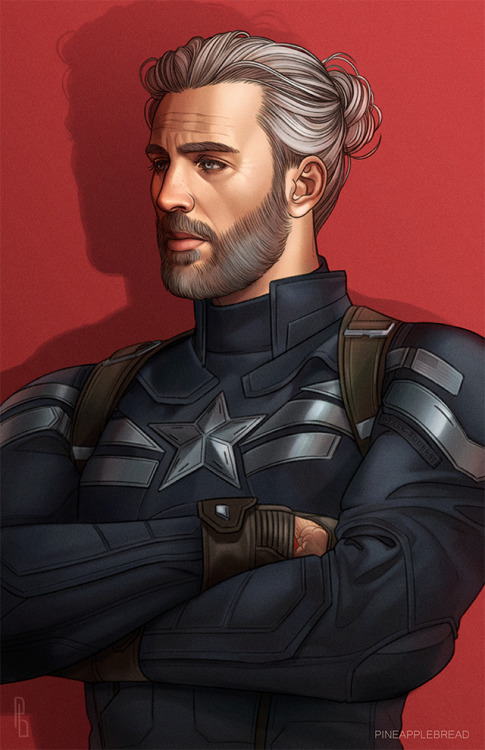 Steve: Try not to kill anyone on accident.

Bucky: I’m not an idiot, Steve. I know how to kill people on purpose.

hope nobody did this yet but here’s an all-time favorite:

I decided doing a series of posts about other endings some of the Avengers could’ve had.

I don’t think his ending match with Steve’s personality. I just can’t see Steve abandoning his bestfriend (who just got back after five years of not seeing him) and Bucky didn’t have the time to have some mental stability after Hydra and being one of the rogues (he really needed Steve).

Steve’s ending looked more like a disney princess’ ending than anything else. In his first movie he LITERALLY just met Peggy and after ONE KISS he fl in love with her. It’s not that I don’t ship them together, it’s just that if the writers wanted them to be endgame, they should’ve written more about them.

Now to the possibilites Steve could’ve had besides ending with Peggy:

I actually have a lot more to say about Nat’s ending but I’ll just say it when I make a post about her.

Steve could’ve also just retired. After returning the stones, he goes back like his usual self (not old) and gives his shield to Sam.

He would still work for the Avengers. He would be like a mentor to the new ones, and even help them adjusting and everything.

He doesn’t need a woman to be happy.

This one would only work if the writers had explored more about Steve and Bucky relationship.

Neither Steve or Bucky can be called straight. We only know they liked women, they could be bi or pan.

And Stucky is actually my favorite MCU ship and I would’ve loved if it actually happened.

For me, this alternative ending would only work if Tony had survived. I don’t think the fans (me included) would’ve handled losing both Steve and Tony.

We all know if needed to, Steve would’ve sacrificed himself for the world.

I really like to know your opinions! If you liked his ending, and if not, what you wanted to happen instead.

Continuation of Make up or break up

No smut I this one at the moment but I am working on a bonus little smut Drabble related to this :

Okay, so this thought came to me last night. I don’t know whether I’m clutching at straws, or whether this theory has some viability.

Now we know it’s not odd for WandaVision to reference other TV shows, just look at their ‘opening credits’. I was wondering if the name ‘Westview’ was a nod to Westworld? After all, Wanda is controlling the world’s inhabitants, causing them to live out loops against their own free will JUST like Dr. Ford, the owner of Westworld.

Like I said, maybe I’m looking for something that just isn’t there, but it would be nice to know what you guys thought!

Steve Rogers, 1944: oh bucky’s dead? I am going to *looks at writing on hand* plunge directly into the Arctic Ocean

Y/N: YOU BETTER SHUT UP WHEN YOU TALK TO ME!

Bucky: AND YOU BETTER CLOSE YOUR EYES WHEN YOU LOOK AT ME, BITCH!

Y/N: THAT DOESN’T EVEN MAKE SENSE, YOU STUPID SMART-ASS!

Bucky: THAT WAS ALSO A CONTRADICTORY STATEMENT!

Bucky: SO FUCK YOU! BITCH!

Steve: What is wrong with them?

Sam: At this point it’s better not to ask anymore.

Clint: if your happy and you know it clap your hands *clap clap*

Bucky: am i happy?

Steve: what is happiness, at the end of the day?

Vision: So you see, without me sacrificing my life, the Avengers would never really have won. I think it’s just a testament to how brave I am-

just got a nice writing session on choke on me. new chapter should be up sometime this week. in the meantime have another sneak peek