I have way too many WIPs so I thought I’d share this idea and see if anyone wants to take up the challenge of writing it. Maybe it’ll spark a little inspiration for someone. :)

Bucky collects vintage records, while also being the owner of his very own record store. His life is going smooth for the most part, he’s got a great small group of friends; Sam, Natasha, and Clint, who also works at the store.

But then one afternoon, out the corner of Bucky’s eye, he spots a tall man with broad shoulders and a well trimmed beard (fucking hell those abs) walking into his store. Bucky knew he was a goner from then on.

If it were possible, Bucky would’ve hidden behind the front counter and hoped the guy wouldn’t notice him drooling over those should be illegal biceps. But no. This guy, a literal hansom piece of work that belongs in a museum, comes right up to Bucky with a voice smooth as butter but oh so rough.

“Hi, Bucky is it? Do you happen to have any albums by Frank Sinatra by chance?”

Not even a minute in and this guy’s already on a first name basis. Well, it doesn’t help with the fact that Bucky has a nametag clipped on his very low cut v-neck.

“Frank Sinatra?” Bucky echoes, way too distracted with Steve’s crystal clear blue eyes. “Um, we might have a couple in the back but if you check over here-”

The isles are so narrow, no more than two people can pass by at once. Yet Steve took up most of the room, save for side stepping to let Bucky through but their hands brushed up against each other as he did so. Sparks, fireworks, anything that explodes into tiny pieces of confetti threw Bucky’s brain into a pile of smitten goo.

“Yeah, here’s one,” Bucky says and has no idea how he managed to not stutter with the way his heart was hammering in his chest. “Mr…?”

Bucky not only needs Steve’s number pronto but he also really, really wants to do so many things with him in bed.

TL;DR: Steve found himself searching for an old record from his childhood that his ma would play for him when ill. The internet was no help but instead, it leads him to Bucky’s record store. Music lover Bearded!Steve + Record store owner Twink!Bucky

Please be my guest whoever wants to write this!! 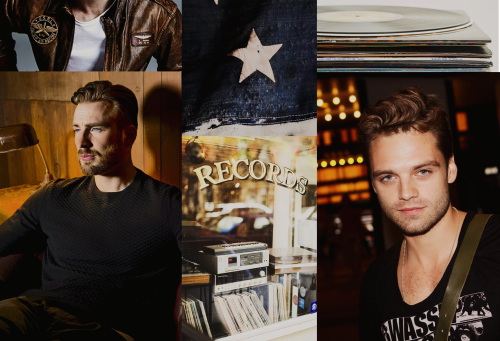 Got My Mark on You

#stucky, #stevebucky, #my fic, #here is it hello, #a lil nervous might puke don’t know lol
17 notes · See All
daybraekPhoto

We fall from womb to tomb, from one blackness and toward another.

We apologize for the radio silence. As mentioned before, this year has been rough for everyone, so we needed to take some time in sorting things out. We hope that everyone’s been doing okay during these turbulent times.

First and foremost, our main mod, Archie, has decided to step back from the bang, so that leaves Mod Jules (aka marvelling-you) to serve as the main mod with the help of Mod Al and Mod Huntress.

In this transitioning process, we’ve decided to further postpone the bang until December 14th, the second week of December, to figure some things out. As we get closer to that date, we’ll have more info.

If you have any questions, please don’t hesitate to ask!

Sunlight filtered through the large window, giving a greenish glow as it draped across the grass strip around the building.

Steve reached his arms into the air, stretching them to full capacity before relaxing his muscles and arching his back towards his left, one of his feet floating above the floor as he moved himself in a slow circle.

There were quite some who tended to avoid this particular studio, because of the large windows, but Steve did not mind. It was not that difficult to come from the gates - that were opened nearly all day - to the property of the semi-large building. If any peeping Tom were to sneak onto the grounds, they could easily sneak a peak into the studio. Steve did care about peeping Tom’s, but if he caught any he would surely throw them out.

When he made another spin, carefully positioning his legs as they moved like solid grace beneath him, arms waving like ribbons in the wind, he caught movement somewhere through the window. His eyebrows knitted together in a frown, almost angrily. If it was that annoying guy again, the one with the extreme ideas and violent friends who never missed an opportunity to creep on the dancers, he would call the police.

It was not him, though.

It was the young skater.

Steve stilled in his careful steps on the floor, one leg curled against his other with his knee poking aside, arms still raised above his head and lashes fluttering against the light. He watched with curiosity as the guy in the black skinny jeans rolled up idly onto the stone pavement. Cocking his head to the side - like a confused puppy, as Nat usually called it - he watched the guy sway his hips side to side as the board moved along beneath his feet.

Perhaps Steve had full control over his body on the floor, he did not think he would ever master the sway of the board. The wheels beneath the plank seemed so… unpredictable to him, as if they could decide to give out or stop moving at any moment, jam whenever they saw fit and hurl him forwards onto a harsh, unforgiving ground.

That thought did not seem to scare the young man as he pushed himself forward faster, going through his legs slightly onto to jump up and flip the board beneath his feet.

Steve was only just in time to keep himself from slipping and dropping both his foot and arms, because the way the guy did it seemed so easy. As if that was not enough, the man jumped once more, flipping the board so easily it was as if he had never done anything else in his life.

Knowing he had to maintain his posture and focus on his own, Steve continued his careful steps, bare toes pressing against the somewhat cold floor of the studio.

However, he could not keep his eyes from wandering, and a surge of warmth blossomed up on his cheeks as he dared to peek through the window again, feeling nigh amazed by the way the skater moved around.

Or: Steve Rogers is a professional dancer, and Bucky Barnes the skater punk who’s really keen on impressing him.

heyy, it’s been a LONG time since I posted! hope everyone is safe!

here’s Steve and Bucky spending their quarantine together at home, staying safe :) 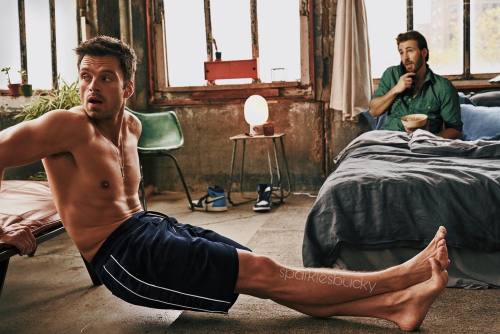 Steve’s face is flushed and it goes down past his chest as well, but his tshirt hides that. Bucky’s got a hand between the blond’s thighs, gripping the chastity. Steve can’t feel it, that’s not the point anyway. It’s a power position.

“It’s my- my dick” Steve breathes out. His breathes are ragged and Bucky hasn’t done anything yet but he’s getting off too hard on this. It’s frustrating because he’s so desperately trying to get hard but the plastic cage won’t allow it.

“Oh Stevie, baby, you think it’s a dick? Think you got a cock? Surely this little thing is a dick is it? Gets all excited at the littlest touch. So tell me Steve? What is it?”

Steve whines deep in the back of his throat, it comes out by accident. He tries to grind into the hand on his cock but it’s useless. He didn’t think he could ever be turned on by this, he’d so damn humiliated but he loves everything about it.

A/N: I know it’s short but I hope you all enjoyed that ;)

here’s how stucky can still win

Happy Thanksgiving! Anon who requested that turkey fic a few weeks ago, here it is :)

Hoping for better options but coming to no avail, Bucky grabbed a bow off the rack and took a couple arrows with him. Always a time for a first. A rifle would do a better job but how hard could an old fashioned bow and arrow be? Point, aim, and shoot.

With a deep breath, Bucky drew the bow and aimed front and center. Bam, right through the turkey. “There. Was that so hard?”

Wait. Through the turkey. Literally. Amongst the tall grass, the arrow stood straight as a rod in the ground.

one love, one house (no shirt, no blouse)

Bucky doesn’t have any set plan for when Steve gets home. He never does. He just likes getting some surrounding softness for them both prepared, just in case. Something sweet and silky sheets are something that never goes wrong, not where Steve is concerned. God knows he deserves them, especially after sudden missions where anything could have happened. Bucky’s not as easily spooked by that possibility as he once was before all the therapy and introduced mission separations, but he’s still human. Super soldier serum and partial cybernetic limb aside.

#my writing, #stevebucky, #stucky
24 notes · See All
voxofthevoidLink
i found a martyr (with his educated eyes and his head between my thighs) - voxofthevoid - Marvel Cinematic Universe [Archive of Our Own]https://archiveofourown.org/works/27700409

“Remind me again why I’m doing this.”

“Because the defrosted pillar of truth, justice, and the American way woke up and went into rut,” Clint recites dully, incredulity at this turn of events having faded into resignation out of sheer self-preservation. “It’s his first rut in, what, seventy years? And suppressants aren’t working. It might kill him.”

Bucky grimaces. He doesn’t know what it says about his life that it has landed him ass-up, face-down in these circumstances.

He’s pretty sure he’s imagining the warmth spreading through his veins. Heat inducers need time to work. But between this and the suppressant-neutralizers, he doesn’t even want to think of what his chemical makeup looks like right now.

Will Rogers be able to smell it on him? Would it even matter? Captain America or not, the guy’s an alpha in a long-delayed rut. All he’ll care about is having a tight hole around his knot, and Bucky’s got that dubious honor.

-
In which Steve’s dramatic awakening in S.H.I.E.L.D. custody happens a little differently, with far-reaching consequences.

“Since you’ve been here, I haven’t given Brooklyn a second thought. That was only home cause you were there. Now home is the woods at night when neither of us can sleep, your eyes when we come back from a mission. Home is that sketchbook of yours where we exist in summer, in charcoal memories…”

“I can’t see anything ugly, you are perfect, love“

Golden era of Stucky in my opinion - Wakanda! 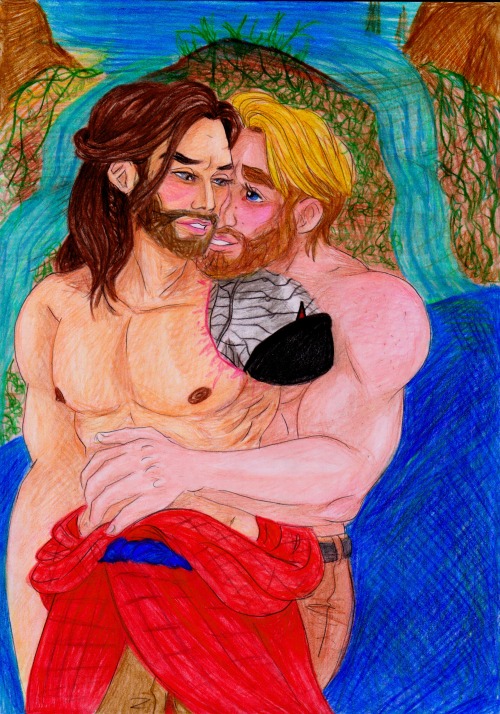 #stucky, #Steve Rogers, #Bucky Barnes, #mcu, #my art, #otp: till the end of the line, #stevebucky
28 notes · See All
heartofgoldmp3Photo 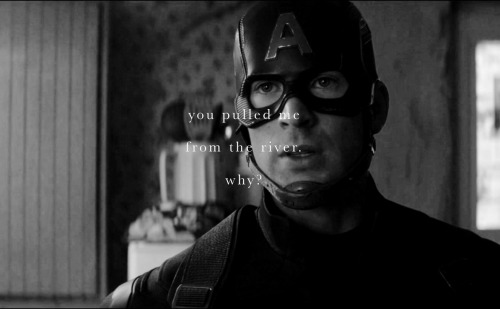 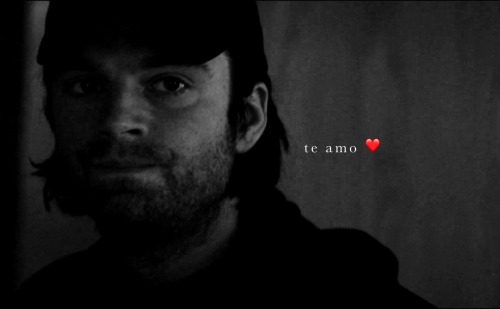 Omg thank you so much, this is one of the nicest asks I’ve ever received 💙

This is one of the funnies requests I’ve ever done, I hope you like it :) also steve totally started a war against sea urchins after this, his soul left his body 😂

I also have this head cannon that steve won’t swim without arm bands or a float after he went in the ice.

As usual feel free to reblog!