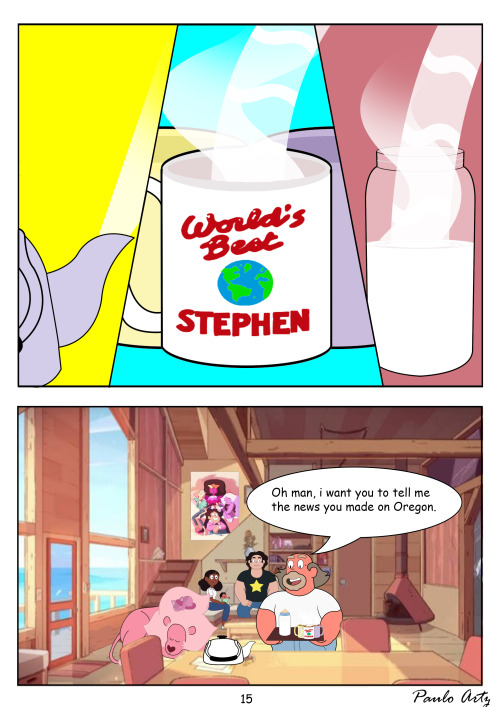 Looks like seeing Connie has stirred some feelings in Nora. I wonder how she’ll respond…

I know this isn’t normal of me to draw Steven, but since he’s in the fic, I had to do a concept sketch of him. I’m still working on the one for Connie, but I’m not sure if I’m gonna be able to translate her over well. At least I have her sketched out as well.

Turns out Connie and Nora haven’t been together for years, you’ll find out why. Enjoy their reunion.

I had this Kevin X Jamie fanfic -ish idea where basically Kevin and Steven ( somehow ) are helping Jamie put on a big play in Empire City. ( I was thinking a few years into the future where some way, through Jamie’s friendship, Kevin kind of gets involved as the choreographer and / or producer, but I’m not sure. )

Jamie is just as sweet and charming as ever, but a few years has made him go from cute to cute-ish handsome ( shhh because I said so. And because he’s basically my ideal boyfriend in cartoon form hehe ). Kevin likes him and is always trying to low-key flirt with him, assuming Jamie will instantly gush over him ( yes, his ego is still inflated af ). However, Jamie effortlessly receives attention from quite a few suitors and suitresses, a few whom are in the cast and crew of the play, and Kevin is just one of them.

Now, as for Steven ( still not sure why he’s here but he is ), he doesn’t really notice K flirting with J,  but he does see him glaring in his direction every time someone else flirts with him. Judging by his experience with Kevin, he rolls his eyes and snaps at Kevin, assuming that he’s angry and jealous because Jamie’s getting all the attention instead of him.

He doesn’t realize that it’s the people trying to hit on Jamie whom Kevin is actually jealous of.. :P

Pt.2 of this post. This time, fic and words included!

Chapter 2 - getting to know the red a little

I ended up coloring Chapter 4 (24HrAU) cover art as I found that this one is my favorite piece I’ve done for the story so far. I have 10 out 27 covers done ATM. IDK about you, but I’m excited about actually doing cover art for one of my fics!

Compiling these gave me a sense of accomplishment. And pain. In my wrist.

Multi-line summaries nearly always squashed to lessen the vertical length of this post, even if most of it is below a readmore))

Multi-chapter fics, regardless of collection status (chronological order–oldest to newest):

And He Doesn’t Wake: My first SU fic, complete; “It can’t end like this. Or: Waxing realistic as we examine the events of the episode “Bubbled”.” Steven suffers halfway-realistic effects from being exposed to the vacuum of space. Probably not super canon compliant given what we learned in Growing Pains but a fic that branches off at Bubbled and rejoins canon around Mindful Education (and written around that timespan).

Diamond in the Rough: Incomplete; “Connie is in the hospital with a serious disorder, and her biggest chance is an experimental treatment combining minerals with blood transfusions. Little does anyone know…” Originally crack of “Connie gets powers from PD-infused blood” but then ASPR happened and I have to figure out where it goes now (and I want to! but…).

The Results Are In: Incomplete; “Sadie gets a piece of mail from her dad. For most people that’d be pretty mundane, but it’s a little more complicated considering who exactly her dad is.” Barb/Blue Diamond crack (it makes sense in context) and affectionately called “Space Maury” internally for reasons that will make sense later. Has a similar but less “it flips the ENTIRE plot” issue with ASPR. I have many idea chunks but almost no connection between them

He’s Gone: Complete (and technically a oneshot with two “bonus chapters”); “Steven asks Peridot to get the shirt Connie got for him for his birthday from his closet. He says he wants to look nice. She’s confused by his request. Greg and the Maheswarans are less confused and more terrified. He keeps saying it’ll be okay. They’ll be okay, even though he’ll be going away. It’ll just be a couple of days now. Or: Steven and Pink Steven are unable to fuse after being separated on Homeworld. That’s not good for Steven.” Steven dies. That’s it. That’s the whole fic. Might potentially get an extra chapter or two still. Or not. Eh.

Your No-Good, Dirty-Rotten, Gem-Shattering, Rebellion-Leading Mother: Incomplete, little desire to finish; “What if Steven had gone to Camp Green Lake instead of Stanley? Or: If Steven Universe And Holes Were The Same Universe: A Fanfiction (thanks @captainjzh) Or, as the top of my Google Doc I started back exactly a year ago (*2019-01-07) says: SU x Holes: Because the fact that Steven Universe and Stanley Yelnats are both 14 is messing with me”. Wrote this as an exercise after reading the appalling original shopped screenplay for the Holes movie which was basically a nuclear fallout enthusiasts dream world but also quite possibly the worst and most uncomfortable thing ever written and I have had to have whole pages bleached from my memory

It’s Okay to Need Help: Incomplete (three chapters total planned), the last part of the pre-SUF-finale “Steven Corruption Theory” collection; “"Everybody needs support sometimes, and you need support right now, with this. And that’s okay.“ She takes a deep breath. "It’s okay to need help, Steven.” Or: (Based in corrupted Steven theory as well as taking inspiration/using characteristics from a fic by @love-killed-the-superstar​) Sometime after coming back from corruption, Steven sees a therapist to try to hammer out some lingering issues.” Steven has specific lingering issues from corruption due to the way they had to mitigate it, and that affects how he communicates with his therapist some days. Just been blocked on the best way to write it

Waiting is Worse: Incomplete; “Is there anything more awful than the feeling of powerlessness?” The movie mostly ends the same, except Steven doesn’t un-rejuvenate.

Realism: Incomplete, strong desire to complete; “As much as he may want it to be, this is not a dream. He’s not possessing anyone. It’s not happening to someone else. It’s real.” Steven has the same effects happen to him as the Watermelon Steven from Escapism–an arm and a leg are amputated.

The President Kisses Babies, and Other White House Briefs: Incomplete, open-ended oneshot collection with very little overarching plot; “Oneshot escapades of President Connie Maheswaran and her First Man, Crystal Gem and public speaker, Steven Universe.” Inspired by a Tumblr post and with more ideas in the pipeline! Love this fic even if I lost most inspiration for four years!!

Time to run some errands in the city.

So much for seizing the day. Naps are better than errands anyway.

“24 Hours“ cover art for Chapter 2: Best Talk Ever.  I have posted Chapter 2 on AO3 and the link should be below this post. 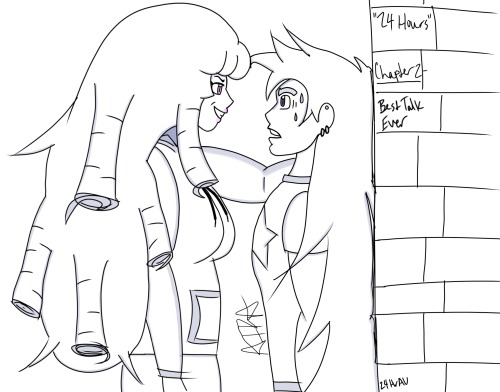 How many fics did you write this year? What was your total wordcount?

This year I wrote/worked on 9 fics for a combined wordcount of  274,518. It’s been a very Good Omens year as I work on my ever expanding GOmens extended universe. (Don’t ask me why) but there was a smattering of Broadchurch  and the rare Steven Universe– also updated my ancient One Piece fic! But yeah…. Mostly GOmens.

I also wrote a dumb DW fic that shall not be named.