This one is kind of all over the place, but I got inspiration for it from the new Stand I made. Sleep Walk is a combo of that old song, some creepy clip from Filthy Frank, and the Blair witch.

In the wild, it’s the difference between living to see your next meal or becoming the meal yourself. Instinct dictated survival at all costs for various reasons. Flight response kicked the muscles in gear so that they just acted of their own accord the minute something happened. Flee. Get the hell out of there, even if the predator you’re escaping is chasing you into more danger.

It was new to them, having to hold someone when danger was all around. Staying in the thick of it never boded well, and every fiber of their being screamed to get out. Didn’t help that the two of you were being stalked by an entity that relied on eye contact. Craved the attention. Just as Nagaina the cobra tried to unnerve the tailor bird’s wife, but like her you both knew better than to turn and look your tormentor in the eyes. Unfortunately there was no option to do as plankter law dictated, which would have been to swim away. Foo Fighters faced the wall, eyes tightly shut, not feeling the iron grip you had on them because they were trying their hardest to ignore the sound of nails clicking against the epoxy flooring. It was too thick to be picked at and formed into a weapon, and far too thick for claw etchings to be engraved into.

It wanted you to look. But you both knew better.

It always was too dark in solitary confinement. With your tendency to lash out when the lights went out they had to put you somewhere that you wouldn’t be able to find any ways to be a danger to yourself or the other inmates. This proved to be a mistake. Your mania had only been exacerbated. It had been like this for so long you often startled when you realized there were other living things in this world besides you and your Stand.

How they found you, it was a miracle. But not one that had come too soon. Usually you were up until all hours of the morning, manic, self harming by picking at your face and arms or pulling out your hair. Now, Foo could feel you actually starting to relax the more often they came to see you. You still regressed into childish voices crying in fear of the dark, and like clockwork your Stand still came out when the sun went down.

But now that they were there to rock you gently and hold you, you started to rest. Your eyes would droop around eleven, and Sleep Walk usually died down around one in the morning. They had never experienced this before, usually the flight or fight response wasn’t able to be conditioned into waiting out the storm.

By the time any kind of guard came by, Foo Fighters was gone. And when you woke up from your deep sleep it was only a matter of waiting for them to repeat the process all over again.

Heyo it’s your Fun Fact from a Hispanic gay

When writing Hermès there’s some terms of endearment that a lot of people sleep on and that’s a damn shame.

Idk where some of these pet names came from that I’m seeing from people that are clearly not Hispanic or Latino, but typically someone your dating is gonna be called the gender neutral “babe”. Good catch all and pretty common with peeps like me who speak more English than Spanish.

It’s also common if you’re kinda nasty to be “Mami” or “Papi”.

“Hermosa” is a big one too if you’re talking to an AFAB babe. Also I’ve yet to see Hermès refer to her girlfriend as her “ruca” and I’m sure the old school ones would appreciate that too.

My fellow Latino/Hispanic peeps are welcome to add some ones I may have missed but these are ones I’ve used/have had used on me. 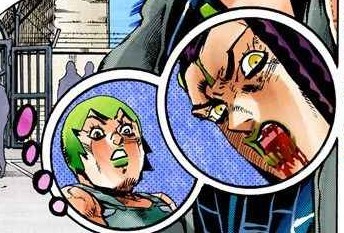 an assortment of random jjba doodles 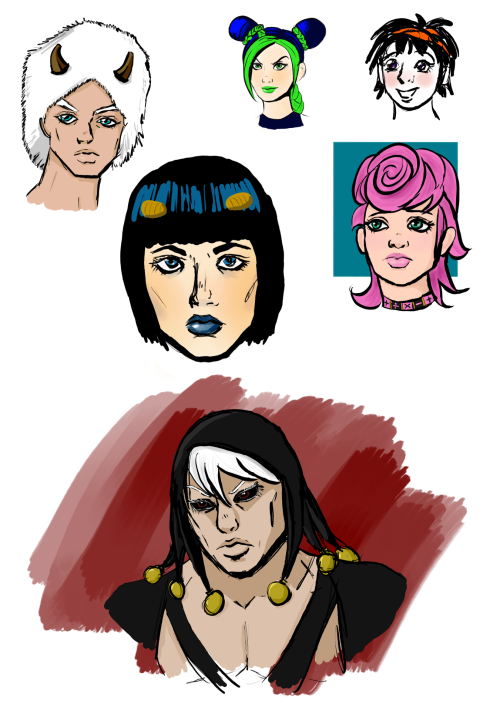 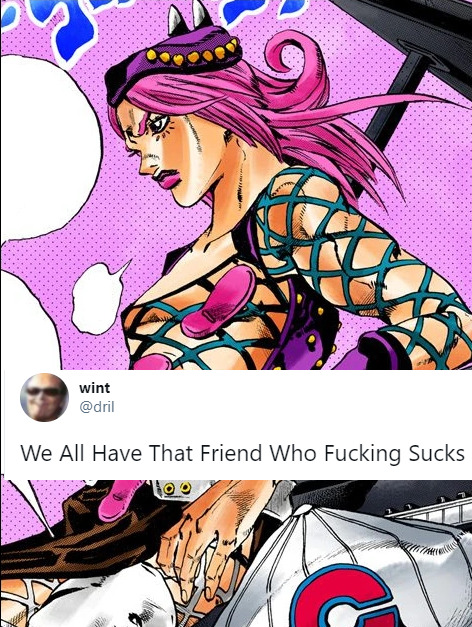 “Anything at best, but the current situation with Ethyl is a small start.”

“We’ll bet on it. After all, something might just get him out of that mindset.” Uncle Gio..dunno what to say, I’ve just made something . :)

The pillar begins to feel extremely awful, a feeling that he’s familiar with on some matters. “Give me a moment.” He says while exiting his quarters.

Stone Ocean is not confirmed

Thunderstruck chuckles.“Oh, he knows, but why make yourself the villain when you can shift the blame, to either the other person, your most hated enemy or the whole world? That’s his mentality, if he hurts his family, something else is responsible, if not a person then fate. Well in his current case, that’s not an option. Either way, I can care less.”

the only reason Jolyne kept Annasui around is because his ability was useful as was his blind devotion due to “love” for Jolyne so she could use him, hell, she didn’t have to- half the time he volunteered to be used all by himself. Jolyne had no plans to actually marry him. You can’t seriously tell me she liked him. She looked at him the same way as you’d look at a lamp or chair. I think she eventually came to respect him because of his devotion and value him as an ally and friend. But he was not right in the head; Jolyne knew that. (Or maybe she didn’t honestly… this is the same woman who let an 11 year old drive a car and a helicopter. Also she trusted a great deal of strangers who had it out for her.)

#jojo#stone ocean#ramblings#i dislike the ending implications lol#he got up in her face like 5+ times#and she just looked at him#with a vaguely uncomfortable look on her face#Actually I’m not sure Jolyne is aware of what constitutes creepy to be honest?#She doesn’t seem to register that.
0 notes