It’s all of those, love

I’ve never seen it as transphobic? I’m not really too sure about that one

Person A : oh my god

Person A : you’re so fucking good!

Person A : this is the best thing that ever happened to me

Person B, barely containing himself also sporting a raging hard on at this point : oh my god I’m giving a light back massage not fucking you senseless. Get a hold on yourself!

#bucky barnes, #stucky, #steve rogers, #they already have such a deep emotional connection with each other
3 notes · See All
voxofthevoidLink
if i come unhinged, let you under my skin - voxofthevoid - Captain America - All Media Types [Archive of Our Own]https://archiveofourown.org/works/27123203

Bucky stirs at the sound of Steve’s voice. He hasn’t managed to free himself of the restraints. His face heats when he thinks of how he stopped trying a few minutes ago.

At least, he thinks it’s been a few minutes. He’s not very good at keeping track of time without a clock or phone to check. He used to be, but that was a lifetime, maybe two, ago. And now, he doesn’t know how long it’s been, and Steve’s awake, and Steve’s seeing him—

He hears the sharp snip of scissors, and the pressure on his arms disappears.

Bucky lets his arms fall to either side of his body. He wants to scramble upright and curl into Steve, let those strong arms and broad chest cradle him and block out the world. But he doesn’t because it’s too late. Steve saw.

Steve hauls him up. He’s not rough about it, but his hands are firm, movements economical. Bucky shrinks into himself, but then Steve grabs his chin and turns his head, and he can’t escape those piercing blue eyes that never miss a single detail.

-
It’s just another night in the Rogers-Barnes household.

Person A : you think i should get a clean shave?

Person B : no. Your facial hair is on point as it is

Person A : but do you think the chicks dig it?

Person B : i say it’s attractive. And if i like it i know the chicks dig it

Person A : you really see things in me that i can’t see by myself don’t you.

Person B, looking at A longingly : i call em like i see em. *blinks* and trust me when i say you’ve got a good thing going on there. Do not mess it up or i will maim you

[based on an interaction i had w/ an allegedly straight guy]

Person A : you never say no homo

Person B : i don’t think i need to

Person A : do you hold hands with your buddy as you cross the street?

Person A : no one does

Person A : ok what do you do if you’re hanging out with a friend and your hand accidentally brush against his ?

Person B : i just shrug it off no big deal

Person A : you say no homo oh my god!

Person B : you are so insecure about your sexuality you know that ?

Person B : no i see it. Just from a different angle

Person B, muttering : and you’re in denial

Battle surrounded them as Bucky raced for the file room of the newly attacked Hydra base. This one was a lot worse than they could have guessed it was filled with unknown agents all itching to be the one to get the Winter Soldier back for Hydra, but none of that mattered to Bucky what mattered was the stack of manilla envelopes that contained the files on everything they did to him over the past 68 years.

A small blade grazed his upper right arm causing him to curse loudly in the comms, before knocking out the poor soldier who thought that that was a good idea.

“Buck get out of there” Steve was yelling over the comms from where Bucky assumed was the jet.

“I am so close to Steve in just two more minutes,” he began to run.

“I said get out of there, that’s an order” this was not a request and if that wasn’t clear from his words it was from his tone. 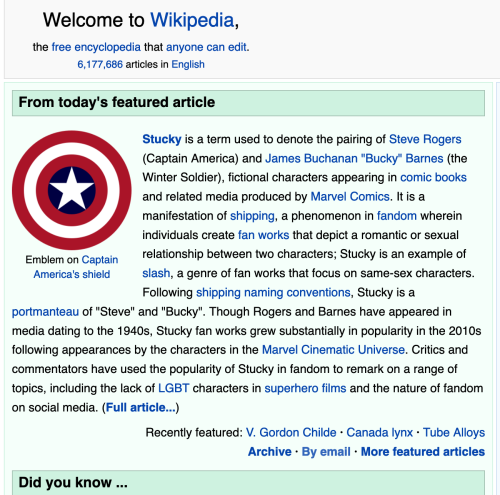 #stucky, #otp: to the end of the line, #wikipedia
3 notes · See All
awesomerextyphoonText

I’m currently working on a MCU fanfic called ‘A Warrior’s Heart’. I was wondering, should I keep the main female character as original (Ifekerenma/'Ife’ for short), or should I do a reader instead? The fanfic is going to be pretty long (20+ chapters).

Like, anyone who has ever been on my blog knows I love the idea of Steve and Bucky getting together (or Steve and Sam or Sam and Bucky… I’m not picky) but I don’t define their entire story by the perceived romantic relationship. I go by what I saw on screen, not what I wanted to see.

#might expand on this later, #more ca:cw bullshit, #stucky
2 notes · See All
nataliaclintPhoto

love was made for me and you

This was the last thing I thought I’d ever see in Wikipedia. Congrats to the Stucky shippers I guess.

My partner surprised me with a coffee mug they made ♥️

#they MADE this, #how kind, #its also quite large so yay for lots of caffeine, #they are fueling my stucky fire, #stevebucky, #stucky, #bucky barnes, #steve rogers, #the winter soldier, #captain america, #is this too many tags?, #oh well
59 notes · See All
metalbvckyPhoto

This defiantly goes for the books.

I Got a Really Hooked on Cartinelli!Stucky au

So that makes no sense but basically Cap!Peggy and Hydra!Angie. Like, Angie switches places with Bucky, and Peggy switches with Steeb

I made a background because I need to practice my background art, so it isn’t very good, but all my backgrounds are public domain, if u need one and can’t do it yourself!

And the full piece!

Anyway, I’m proud of it, what about you?

What should be the featured article today? Historical event? Geographic landmark? No Imma go with popular non cannon gay ship with a catchy name

Two Plus Two ~ Stucky/Evanstan AU (Inspired by this post of @k347, with a loving nudge from @musette22 and dedicated to @sandy-benzie who loves the pairing with their babies)

#stucky, #stevebucky, #wintershield, #evanstan, #stucky AU, #evanstan AU, #a bit of both, #inspired works, #couldn't find a suitable clip of evans for it, #had to settle for this one, #my psd mehdits & gifs, #my gifficlets, #sorry for the mistakes in english, #sorry for the quality of gifs, #|è†hål ð³§ir³s
207 notes · See All
i-am-probably-insaneText

Did I spend 30 mins making Stucky among us characters… yes, yes I did 😂

I kinda want to make this into a comic, if anyone is interested please let me know in the comments.

As usual feel free to reblog and send in art requests :)

Ever since he was a little kid, Bucky has loved piles of leaves. More specifically, he loves jumping into piles of leaves. He doesn’t get to do it very often, but every once in a while, he’s able to spot a pile right up against the curb that he’s able to frolic in for a bit. And he always puts it back where it had been. AT least as best he could without actually carrying a rake on him at all times.

But this pile of leaves? This is the biggest pile of leaves Bucky has ever seen. He spots it easily on his morning jog. As he approaches it, it realizes that it’s nearly as tall as he is. How the hell could this house have that many leaves?

He doesn’t care. He’s jumping in it. He picks up speed as he gets closer to the pile, and by the time he’s right up on it, he’s going at a pretty good clip. He leaps, spins, and falls into the pile on his back, arms and legs outstretched. Bucky doesn’t have time to enjoy the feeling because hears an “Oof” almost as soon as he lands. He scrambles to get up out of the leaves.

“Yeah. Under here,” the voice says back.

A man pops his head up out of the pile. “It’s okay. No harm, no foul.” He swims out from under the leaves, crunching a couple in his hands as he does. “This your house?”

Bucky blushes. “It was just so big.” Then a thought hits him. “So, this isn’t your house either?”

“Nope. I was jogging by, too. I mean, how do you ignore a pile like that?”

Just then the front door opens and a woman comes out. “Can I help you?” she asks. It’s obvious from her tone that she doesn’t take kindly to them being on her property.

“Afternoon, ma’am,” the man says. “We were just out here jogging and couldn’t resist your leaves.”

“You’re a little old to be jumping into leaf piles, aren’t you?” she asks. Bucky can see her brow arched from the sidewalk.

And with that, the man grabs his hand and starts off running. Bucky has to follow along. After a block or so, Bucky slows up. “Wait.”

The man turns back to him. “Yeah?”