If I keep trying one of these days I might be able to draw poor hux. I have my doubts though. 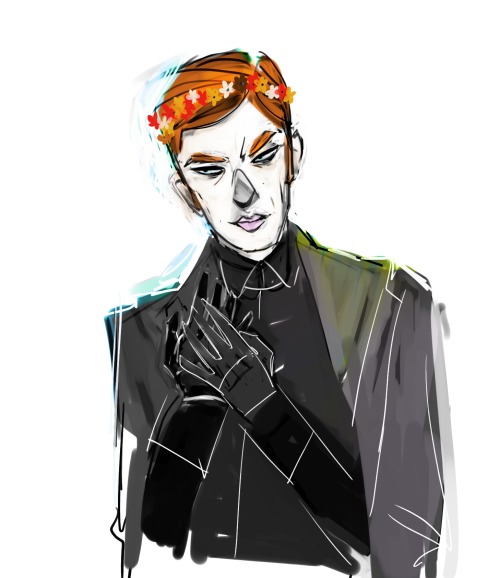 I love dumb bitch cinnamon roll broly from super as much as the next moron, but he makes it so hard to find my edgy sadistic man-child broly from the 90s!

#is there a consensus of a name differentiation??#gimme the edgelord twunk!#dumb puppy broly is great#ok i love the stupid bastard#BUT i love moron sadist who talks like some shit bag 12 yr old internet troll that just discovered 4chan more#god hes such a piece of shit#broly
1 notes
theythemsam
Text

nooo, not me finally finishing my 13x21 coda fic and then being overwhelmed with rage at Cas while trying to write the description for ao3….

#like my opinion on cas is <3 so varied <3 i love that gay bitch. i will never forgive him for season 11 & 13. Ever.#and especially 13x21 when he has the fucking GALL to tell sam that it is THEIR responsibility to put lucifer back in the cage#motherfucker you watched some tv after you fell for lucifers manipulations and let him out#'i was used by lucifer too. it was the worst possible violation' dude... you dumb bastard... are you saying possession is the worst possible#violation? cause uhhhh jimmy might have something to say about that <3#honestly having cas be possessed and then getting to whine about the possession was the worst fucking thing the spn writers have#ever done to his character. like... hmmm dude aren't you forgetting a special little someone?#but especially that he says that to sam... its nauseating <3#anti cas#s13 will single handedly turn me into a cas anti if i think about it for too long <3#when their experiences vary sooooo wildely... its just not a comparison you can or should make <3#AU where cas says that and sam suddenly reunlocks his psychic powers and just explodes him into a bloody speck on the ground <3#then he uses that power to drain And Kill lucifer completely and call Jack and Mary to the gate and then everything is nice <3#like i love 13x21 it is... such an angsty episode. like literally my favorite. every sam scene is good in there.#and what cas says is soooo good and horrible and terrible and amazing to watch.#its a stupid fucking thing to say but it is so in stride with the writers making cas not give a shit about sams violations <3#and not giving a shit themselves <3#sam babbles
7 notes
no-more-treason-guys
Text

#tangled the series#tts#tts hector#hector tts#hector tangled#yes i think hector is hot#i am shamelessly attracted to this unhinged and feral man#he deserved more screentime#i was robbed#stupid dumb feral bastard asshole#unleashing a goddamn ancient evil and getting mind controlled by it#i love him so much#i bet hes got so many braincells but he just refuses to fuckin use them#idiot#quirin: hey hector#hector: [biting a stick he found because he just kind of wanted to] hello#quirin: ...bye hector
9 notes
chrishansenfromdatelinenbc
Text

I love that i can be like “everyone in enzai is my son” but also the list of characters who did nothing wrong who i wouldn’t kill on sight is like. 2 characters long

#io did apparently commit first degree murder. im sure he had a good reson but some people would consider murder to be bad#guise is just stupid and i hate him so much. he didnt commit any crimes hes just a dumb little bastard of a boy#actually shion did nothing wrong hes my little baby son whomst i hold very gentle#except apparently were all still fighting abt if hes real or a stress induced hallucination like. shut tf up lemme have one good thing#i want the game to have one healthy and age appropriate romance!!!!!!!!!!#just bc i think the villains are an all you can fuck buffet doesnt mean i think the 16 yr old protagonist is allowed to think the same#i wish he was allowed to romance io. i mean we all do. but idk how healthy that would be hes just smaller slightly less traumatized valewida#GOD i want them in therapy SO BAD#rly abt to just write fics abt yaoi bottoms getting therapy i need yoonbum in therapy or ill die#io and vallewida should go to therapy together evan should take them both to therapy#evan should also go to therapy while hes at it but i know he wouldnt#i will make a whole entire new self insert to forcibly drag him and lusca to couples therapy and also regular therapy#me as a traumatized 14 yr old: i LOVE how they depict the ways these characters have processed trauma. relatable! interesting!#me now as a 25 yr old about to get my masters in psych nursing after dragging my mental health out of hell barehanded: あああああああああああああああああああああ#i cryim i want them to heal!!!!!!!!!!#i literally want to see one single recovery from these characters so bad i almost want guildias to get help
0 notes
adhdselfshipper
Answer

My main F/O rn is Dabi! Uhm, honestly it was just a combination of seeing the dork in the manga and immediately being like Oh? Oh? and then he was a bastard and i was like OHHHHHHH? OH??????? HIM????
and also im a shigaraki kinnie but thats my secret ;3c

Duncan is the punchable-est. With his dumb accent and his dumb curls and his dumb smug bastard face. Obnoxious, arrogant, and in the end kinda stupid (even though he’s been pretty much smart up til that point?)

Playing games on duty. Rubbing his winning in others’ faces. And get your boots off the desk you ass.

The only thing they could have done to make him more obviously a cocky asshole is if he was eating an apple.

Also, he’s really pretty (duh) but somehow that serves to piss me off more?

Punch Rating: 7/10 (points deducted for mild cleverness, I don’t want to ruin the pretty view, and also he’d be into it).

i think we’re ignoring an aspect of seto kaiba’s obsession with impractical duel monster/bewd crap. and that aspect is: kaiba corp is a former military arms company. that seto has now turned into, of all things, a game company. half of all ygo seasons have some sort of plot involving people who are Very Unhappy with seto about it and who Will Kill Him for it. which turns all of his ridiculous technology (blue eyes white jet, the holo technology, duel blimp™️, his fucking jetpack, etc.) into absolute spite inventions that send every previous military contract, investor, and board member kc ever had absolutely batshit.

#i mean a lot of it is totally seto reclaiming his childhood in weird ways because he is in no way well adjusted#but some of it is absolutely seto going ‘a bewd jet is stupid’ then 5 seconds later saying outloud with no context#‘wait that’s something gozaburo would say’ and then an all nighter later kc r&d has the schematics for the bewd jet#and???? imagine you’re a former part of gozaburo’s kc and you see seto fucking kaiba in his gaudy anti aerodynamic bewd jet#tell me you wouldnt be frothing at the mouth in rage and jealousy over the technology#seto kaiba#kaiba brothers#gozaburo kaiba#yugioh#ygo dm#mokuba kaiba#speaking of#i also like to think that every dumb 2am thought mokuba has also goes straight to r&d#mokuba after staying up playing video games: what if you could smell the holograms#seto kaiba the one up late playing video games with him: oh my god youre a genius#cue two days later seto entering mokuba’s room without knocking and straight faced asking him what he thinks dragons would smell like#mokuba: processing..... ‘NIISAMA N O’#also pour one out for kc r&d those poor bastards have to deal with so much#seto at one am calling a conference call: WHAT DO YOU THINK ABOUT PORTALS TO THE AFTERLIFE#kc r&d: w h a t ????#seto: right sorry i’ll get you the specs tomorrow good night#kc r&d: W H A T ?????#i have a lot of feels about kc employees but that’s another post
468 notes
asteroid-soup
Text

no fuck you da4 canon i dont care what you do my dragon lady will be involved she doesnt give a fuck she Is Not Sitting Down . no. absolutely not.

s*las you may have taken one of her forearms away but that just means she has a prosthetic with a built in shield function. are you. stupid. are you stupid in your bald head

#solas you stupid bastard you just gave her the chance to make herself more of a weapon than she already is#you just gave her the chance to replace her hand with a knife and a shield are you stupid. are you dumb.#konqestiare#dude that's like trying to tell doomslayer to take a nap forever#it's not gonna happen they're too angry#anyway look up the guardian shield from gow4 that's what her prosthetic does
2 notes