You and Suga had been dating for over a year now, both of you in your third year. Suga had been practicing with the first years a lot you were very understanding of his limited time as nationals approached. He’d always been a doting and caring partner so you always communicated, texting before bed and catching up during lunch to hang out.

You trusted him a lot and felt secure in your relationship, enough to tell him when you felt like he wasn’t prioritizing you anymore. “Hey suga, are you practicing with the first years after school again today?” you looked up at him from beside his locker door, fiddling with the lock. “Yeah we have practice everyday for the rest of this week, is everything alright?” you nodded before continuing “I just feel like i haven’t seen you in a while, i know how close nationals is but is there a day where you’re free soon?” he closed his locker and stood to face you pulling your body towards his, arms around your waist. “Ah I’m sorry love, i guess it’s been a while hasn’t it? I’m sorry for making you feel neglected like that, i don’t have practice next Thursday do you want to go for dinner then? I can stay over too” you smiled up at him, pressing a kiss to his cheek “That sounds amazing thank you suga” he hummed and smiled back at you “thank you for being so understanding, i have to go now but i love you” he kissed your forehead “love you too” you waved back, smiling to yourself.

Sugawara- so a friend asked me to draw sugawara so here it is. But there is probably going to be something soon after this post because I messed up the nose. Anyways enjoy. [also i didn’t write ‘daisuki’ because it wouldn’t fit :’)]

A/n: I’m sorry Issei’s got so serious 😭😭 I hope you guys enjoyed it tho.

some of these have no explanation, they just feel right

☠︎︎ Daichi - goes rouge as a police officer, takes “justice” into his own hands. Eventually gets fired.

☠︎︎ Tsukishima - offshore trading and hate crimes (yes he’s married to Tadashi, what about it)

☠︎︎ Noya - human trafficking, and gets away with it bc he travels the world

☠︎︎ Asahi - runs a red light, also gets nervous when pulled over so the cop thinks he’s sus; he gets arrested for perjury bc he lied attempting to cover nishinoya

☠︎︎ Tanaka - public disturbance by inciting multiple riots at music festivals. He is banned from all of them, he’s not even allowed at burning man 😔

☠︎︎ Ennoshita - gets arrested for being a bystander, was watching Tanaka and Noya fight and was taken in for being there

☠︎︎ Suga - arson, sets a house on fire (he knew it was abandoned) lights fires to feel joy

☠︎︎ Yachi - hit and run, sobs as she drives away bc she wants to make sure the other person is okay but she also doesn’t want to go to jail.

☠︎︎ Kiyoko - sells organs on the black market, makes a lot of money out of it

☠︎︎ Kageyama- accidentally shoplifts. Sweet sweet boy saw the “buy one get one free” and thought that meant you bought something, everything of the same product was free. He doesn’t even scan at self checkout

☠︎︎ Hinata - tax fraud, cries when he has to go to court bc he didn’t mean to! It was partly his fault, I mean that’s what you get for asking Tsukishima to do your taxes

☠︎︎ Ukai - public intoxication, pulls his pants down and pisses in a bush and gets tackled by police. The police officer was none other than Daichi, he’s mortified.

☠︎︎ Kuroo - runs a mega church and scams people into giving them his money, also pyramid schemes, kenma gets in on it to.

☠︎︎ Kenma - voluntary manslaughter against Lev. Also committed computer crime & video game piracy. He steals them and sells them, and he adds those stupid jump scares in the game to scare the kids that buy them.

☠︎︎ Yamamoto - illegal possession of a weapon, it was a butterfly knife that he pulled out to show off but people thought he was going to stab them

☠︎︎ Yaku - hazes people in college parties, someone has died in his frat and he ran 😟

☠︎︎ Goshiki - creeping on ppl while they change, but he works at the store. Pulls some bs like, “Sorry we actually have to be in the room as you change😁. ”

☠︎︎ Shirabu - steals medical supplies, and pharmaceuticals and sells them on the dark web. Has also purposely given the wrong medicine to patients he thought were annoying

☠︎︎ Ushijima- stalking and harassing Oikawa to come to shiratorizawa

☠︎︎ Osamu - money laundering, is the best bc he uses his restaurant as a front

☠︎︎ Kita - grows a whole weed field, has Aran sell is for him

☠︎︎ Suna - accessory to a crime, was only there to record it and ended up getting caught with them.

☠︎︎ Aran - another good guy, occasionally buys and sells weed for Kita (keeps most of it for himself). Refuses to sell to kids, and if they ask he will sell them oregano and tell them its weed for his own fun

☠︎︎ Oikawa - prostitution and soliciting. Also did a shit ton of coke and molly in Brazil

☠︎︎ Iwaizumi- aggravated assault by fighting some asshole in public, when a cop intervenes he resists arrest

☠︎︎ Kindaichi -  Goes to a high school party. Happens to be the only one who gets caught by the cops.

☠︎︎ Issei - drinking and driving. His job is hard, being around grieving families all the time, seeing people lose themselves bc their other half is gone. It takes a toll on him, and he goes to a bar and drinks to much and then drives home. Ended swerving off the road, doesn’t hit anyone, but he just sits there for a while.

☠︎︎ Akaashi - not really a big crime but self plagiarism, he was having writers block so he reused a essay he wrote in high school. Gets fired from his job :(

☠︎︎ Bokuto - tax evasion, simply doesn’t do his taxes because a.) he doesn’t know how & b.) he forgot and Akashi wasn’t there to help him

Konoha -  inflated the price of pharmaceuticals. He is Big Pharma

☠︎︎ Aone - he is a good boy, so is was most likely only jay walking.

☠︎︎ Koganegawa - breaks into zoo enclosures and chokes the animals

☠︎︎ Sakusa - sprays a stranger in the face with hand sanitizer bc they got to close, they end up almost going blind and he doesn’t even feel bad

☠︎︎ Terushima - public indecency for having sex in public (also uses glory holes 💔). Would be that person to have sex on the beach, especially if it was crowded with families

☠︎︎ Alisa - drugs men and steals all their money/jewelry. Uses her charm to make them trust her and then swipes it when they are knocked out 😌💅🏼

☠︎︎ Daishou - tripped an elderly woman 😩 (swears it was an accident)

;  “  can you write one for suga where he comforts a reader who went through a heartbreak??  ending in a relationship! “

; I hope I did alright! Thank you for requesting. <3

suga san are you grumpy noww

look how cute sugawara is. 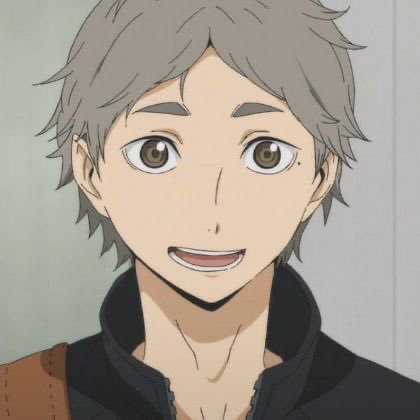 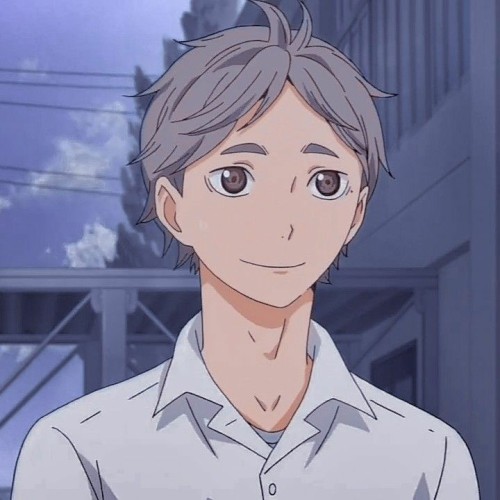 Pairing: Sugawara Koushi x ex!reader x drunk friend atsumu
word count: 1,871
Synopsis: When everyone passed out after the wild celebration of New Year in Kenma’s apartment, you and your tipsy ex boyfriend, Sugawara, along with Daichi, Kenma, and Akaashi stayed up to take care of a broken hearted and drunk Atsumu, who just have broken up with his longtime girlfriend. As the night goes deeper, your conversations go deeper too and all of you start reminiscing about the past.

this is my first post after going on hiatus and my first for the year, this was inspired by the official art of greetings for 2021, where they they celebrated new in Kenma’s and they were watching Lev in a game show. Sorry if I’m posting vv slow, school is actually killing me but yeah I’ll try my best to post more uwu. I hope you will enjoy this imagine :3 Have a great day my loves~~ take care and stay safe sunshines <33

The new year mini celebration has come to an end, everyone is drunk and sleeping on the cushion placed in the living room except for you, Akaashi, Kenma, Daichi and your ex-boyfriend Sugawara. The five of you cleaned up the mess that your drunk friends made then you guys decided to have your chill drinking session. You guys are gathered around beside the cushion where your drunk friends are sleeping and talking about how your life has been.

“It’s been a while since I last saw Y/N” Your tipsy ex-boyfriend said which you agreed by nodding your head.

sugawara: karasuno is somewhat competent and honestly that’s good enough for me

hinata: suga-san kageyama and i tried to make pasta and we uh-

kageyama: we broke the pot.

sugawara: it’s an- it’s an IRON POT. HOW DO YOU MANAGE TO BREAK AN IRON POT

#haikyuu#haikyū!!#haikyuu!!#hq sugawara#sugawara koushi#koushi sugawara#watercolour#watercolor#watercolors#watercolours#traditional drawing#traditional art
2 notes
raysheadcannons
Conversation
<div> College Haikyuu incorrect quotes based on who I think are roomates </div>
Bokuto doing mental math
So if I take 79 and divide it by 8 I would get 9.875
Semi
Oh wow you actually got it correct
Bokuto
Yeah I was top in my Math class, did you think I was stupid
Suga
To be fair your own boyfriend thought you were dumb until you beat Tsukishima in a math competition
Bokuto going into Emo mode
Noya thought I was stupid?
Semi and Suga
Fuck
#Bokuto#sugawara koushi#semi eita#haikyuu college au#haikyuu incorrect quotes#bokunoya#Bokuto x Nishinoya
6 notes
lucvly
Text

“okay, you can open your eyes now.” the soft and comforting voice of sugawara in front of you.

your eyes fluttered open as you removed the blindfold that had been over your eyes for about fifteen minutes (while you could faintly hear your boyfriend crash about three times, against god knows what.)

but now you finally had your eyes open, and in front of you was a rather smiley sugawara, holding a medium sized box.

your eyes suspiciously darted down to take a look inside of the box, a nervous giggle escaping your lips.

sugawara kept the joyful smile painted on his face, watching you look down at the box. he could swear he fell more in love with you with every little thing you did.

“a kitten? oh my god.” a soft sigh fell from your lips, your expression could express how content you were, picking up the small feline in your hands.

“and we’re naming it michu.” he smiled even wider if possible, seeing your soft expression as you held the kitten in your hands and arms.

you gasped dramatically. “pardon, michu?” your gaze was now on him, making direct eye contact.

“mhm. michu.” he proudly nodded at you.

“misa?” his tone was indicated a slight contempt towards the name.

“okay, do not give me that tone when you suggested michu, mister.”

you both gave each other a playful death stare. truthfully, you looked and sounded like an old couple right now. bickering over a cat’s name.

“if we have a kid i am not letting you settle for a name, kōshi.”

but you’re just as blushy aren’t you, sugar ☺️

Nishinoya : so you come here often?

Tanaka : uh…only when i eat

Tanaka : we are compatible

Yamaguchi : what a twist

aww dont be suga. i promise i dont bite.

yeah unless you want her to :3

kentaro akisawa!Daichi and hiroki ino!Suga parent me for the rest of my life one Haisute at a time | “View From The Top” edition