My attempted suicide occurred at 13

If you’re reading this and you’re suicidal, feel absolutely free to message me.

It’s like every time I try to explain something offensive to someone, they reply in a mocking tone ‘sorry for trying to have a sense of humour. Guess I can’t have that with you.’ I guess don’t make fun of me then. I’m not laughing with you, it sounds like your laughing at me.

So yeah I guess you’re right, maybe it’s best we’re not friends anymore because even when I said you’ve put me on the spot i can’t think of what you exactly did, a brain injury has given me short term memory yet you compare yourself to me. Saying you have bad memory. Yet another offensive thing, ignoring everything I have told you about a brain injury. Yeah I’m going to be upset because you’ve insulted me, made me feel insecure and invalidated. So thank you, maybe I’ll do us all a favour, like many of others in my house would love me to do.

Because I know the pain you would be in if that was our last conversation and I had committed suicide successfully. You would be crying in my bed because you currently sleep on the floor of my room because of circumstantial events that happened this year.

Just get out of your own head.

There’s always so much on my mind

so i finally told someone i trust my feelings about suicide and now im getting sent off to a physic ward…oops ima be offline for awhile, sorry about that yall

I don’t know who needs to hear this today, but it’s been on my mind lately. If you’re considering self-harm or suicide, please, reconsider. Don’t you ever go thinking, “nobody would miss me.” Because I’ll tell you what.

People will miss you. And I have witnessed this firsthand.

Three years ago on the night before Halloween, a friend of mine committed suicide. Me and the rest of my seminary class (an early morning Sunday school class on schooldays), found out the next morning. I remember sitting there stunned beyond comprehension. I sat there, just waiting for my friend to come walking in though the door. But he never did. The entire class, easily 30+ high school students, sat their in silence, trying to comprehend what we had just heard.

Eventually word got out around our high school that our star lacrosse player had taken his own life, and the reactions are some that I will never forget. The entire school was in shock, but what I remember most particularly was what happened in my choir class. That week we were practicing a song called ‘Good Night Dear Heart’, which was about losing a loved one. And we cried. We couldn’t get though the song. We were all a sobbing mess. The teacher even gave us the last fifteen minutes of class to cry and hug each other.

And it wasn’t much different at his funeral, either. His parents, which are some of the most amazing, selfless people I have ever met, invited our entire high school, staff included, to his funeral. And you know what? Well over half of the student body and staff came. Even a handful of our recent graduates came as well. Even our principle came.

There were so many people, not just from school or our church, but from the community as well, that the entire chapel was filled to the brim. We had to open up the gym to set up more chairs for people. But they still weren’t enough. We had people crowding the hallways, the foyers, even outside the doors - all to pay their respects and show support for his now grieving family. We even had cars filled in the parking lot and all around the surrounding streets. And while many took comfort in knowing he was in a better place, the agony and sobbing was still there everywhere you went.

Even two months after the funeral, me and my seminary class were still in shock as we were preparing special Christmas present for his family. A memory book of all our memories with him, which we all delivered to his family in person. His parents immediately welcomed our class into their home, where we spoke and shared memories of their son. As we were there, we noticed that many, many people had been coming by to pay respects.

Even today, three years later, I still can’t forget about him. And neither can his family, or our friends, or our entire hometown. So please, understand that, if you really go and take your life, people will miss you. Telling yourself that no one would miss you if you died is the absolute most biggest lie you can ever tell yourself.

Find your reason to STAY

8 months since my suicide attempt. glad to be here. ♥ sending love and support to those who have lost anyone to suicide as well as anyone who’s currently struggling. you’re not alone.

This was so hard to do.

This last year I’ve been so angry at so many people and so many things. Most of the reasons were pretty obvious, but the other day I decided I was sick of being angry and asked myself why. The world is shit, especially right now, but why am I angry about it? I mean, there were the obvious answers: injustice is infuriating and I don’t want to live in this mess. But I also realized there was a third reason that had been sat quietly in the back of my mind for a long time; I’m angry that this world is proving you right.

I should clarify, I’m definitely not trying to weigh up the pros and cons of suicide right now. But when we lost you, one of the things that really fucking shook me was that we had lost our future with you. A future that you said, though implicitly, that you didn’t think would be better or bearable or worth living for. And as a reaction to that, I felt angry. I still do. I want to scream and shout at you,

But this world we live in right now? It doesn’t give me permission to feel that anger. Because, honestly, this planet isn’t far from a rotting corpse itself. I’d be here for hours if I were to write everything that has happened so far in 2020, and for an almost equal time if I were to leave out the good bits. Everyone grieves differently, and all methods are valid. But existence itself rate now seems to invalidate my anger towards your decision.

Like, what if we had saved you that day? Talked you down from the ledge or walked with you out of the hospital. The inevitable promises of it all getting better eventually would feel like pure lies by now. Betrayal, almost. And if I’m totally honest Josh, I can’t imagine a scenario in which you would have carried on and made it this far, had all other events in the world played out the same. That, that part right there is why I feel that white-hot rage. That thought that even if you hadn’t had that momentary lapse in judgement, the shit of this world would have ripped you from us by now anyway. I despise it.

It’s not fucking right and I’m not fucking okay with it. How could I be? I tell myself I should calm down, let it all go and retreat back to ignorant bubble free from world events. But how can I? The more I think about it, the more reasonable it seems that I want to watch this world burn. I want it to burn down to its last ashes, until the problems of 2020 are a distant nightmare, and I want to build one that could have held you. Because it wasn’t your fault, Josh. None of it was. You had every right to keep on living and you weren’t weak for a second, even when you jumped. This world is just so broken that it let you down and would have continued to do so.

I can’t bring you back, Josh. I can’t change the past. But I know that this anger is going to burn bright until the day I can come back and say to you,

“Josh, you look at this world now! I wish like hell you could have seen it, but for now it’s giving hope to other people who felt like you.”

I swear sometimes my brain can act laughably millenial. I never write letters except to you, so it seems to think that instead I’m just having an incredibly one-sided text conversation. (I suppose one could say you’re ghosting me! Oh c’mon that was a good one!)

Anyway, because of this, I sometimes want to try and send you pictures. Or just, randomly go off on tangents about what’s happening as I write. For example, right now Cerberus and Thor are wandering all over my lap as I’m trying to write and I just want to send a picture of their chonky selves like “the rat bois say hey!”. Plus I still often see memes that I know would make you laugh and it takes me a second to remember that oh… there’s no actual Josh to send it to. It kind of sucks to remember that actually you’d never see it, or read these letters.

Oh well, ce la vie. I guess I can hope you’re floating around somewhere with sight of this.

I can’t stop thinking about you lately. Not just the whole death thing but you as a person. I still just wish I had more of you to hold onto. Even now heartache is still true to its name. It really does just feel like my heart itself is stinging in pain. Sometimes I worry there’s something wrong with me, or that I have no right to hurt this much more than a year later. But then I think that of course it’s still going to hurt. I loved you. And I know if I lost any of my other friends I would hurt for years, so I must be just thinking utter bollocks.

My inability to shake your from my mind lately is probably due to how long it’s been since I last wrote. Sometimes life gets too busy for me to write to the dead. But like it or not, I seem to be tied to you via these letters; I simply can’t ignore you for long. Neither my mind nor heart will allow it. That’s okay with me though, Josh, you could never become an inconvenience. Man, I really wish I’d told you that while you were still here.

+ yes I am grateful, and it doesn’t change how much I think about suicide, so thanks *awkward 90s kid peace sign*

- It does create more guilt that I get to swim in everyday, so thank you for making my life less miserable.

*I am safe in the moment, thanks for asking* 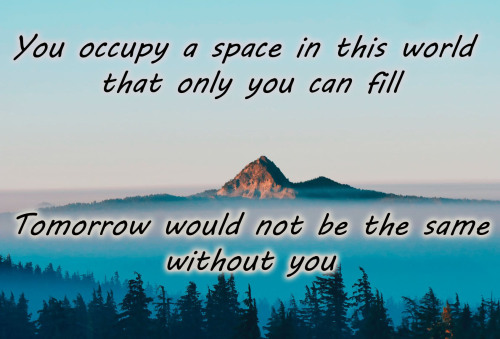 #in case you need to hear it, #suicide awareness
10 notes · See All
fracturedbeautyText

what song/s make u feel absolutely nothing? you can stare at the ceiling thinking of everything yet nothing at the same time. what’s the song?