Gives you another sun wukong redesign

Hello dear watermelon babies! I’ve finished a second part of my jttw one-shot collection and I wanted to know if any of y’all cared to read it. If not, I won’t post it. :)) it’s ok if you don’t wanna read it! I just don’t wanna be annoying with my posts.

#jttw, #journey to the west, #sun wukong, #monkey king, #my art, #hands work like Uhhh, #certainly not like that!, #just a fun sketch i did last night :], #i wanna draw bajie and sand next!!, #sorry for clogging the tag <///3
3 notes · See All
chronicallydepressedbudgerigarText

An among us blacksun request for @becauseihaveyou

I’ve been informed that my patron god is Sun Wukong

So like, later losers, I’m chilling with the Great Sage Equal to Heaven and we gon party hard and maybe become accidentally immortal and generally be a chaotic plague upon everyone else

This… was not meant to be colored but, I got carried away, hahaha.

I noticed a little error, but it doesn’t matter. I’ll correct it on the next time I draw him.💖 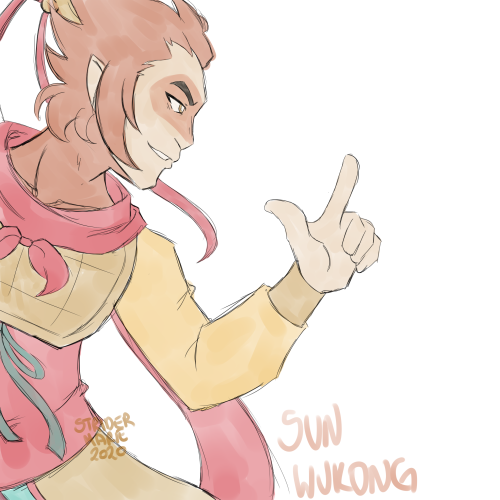 Excuse my horrid writing but god i would never finish this as a comic but yet i wanna get the scene out so HOIHEFEIFIO a fic(?) on the Wukong vs MK fight in Peach Tree AU, its best to read about the au first for context but bRRR

Happy Halloween y’all! Hope you enjoy this fluffy Halloween piece for my Hurt, But Healing AU and it’s bonus drawings!

Two introductions to be made here!

The first is Reas Vasilias-Schnee, my Iceberg baby!

The second is Constellations, the ship between Reas and Luna!

Remember ask box is OPEN for questions and requests around the Next Gen AU! 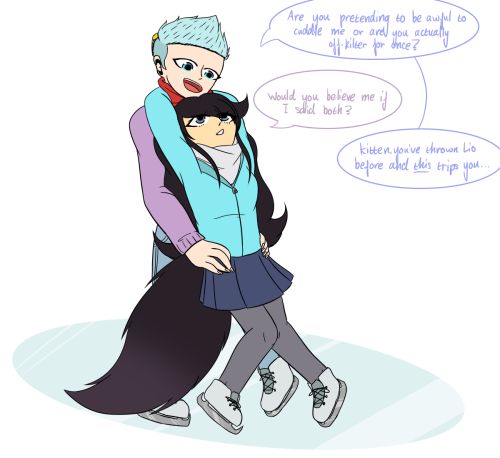 Blake: I can. Goodnight

#im not really exaggerating tho, #every time he leaves to fight a monster he goes outta his way to tell whoever he leaves xuanzang with tyat they better pamper him, #OR ELSE, #jttw, #journey to the west, #monkey king, #sun wukong, #monkie kid, #or idkthe general style atleast
107 notes · See All
winterpower98Photo

I AM DUMB BECAUSE I JUST REALIZED SOMETHING!

Wukong was a dad even before he met Tripitaka and MK!
He had to take care of all the monkeys on the Mountain of Flowers and Fruits!

Also, little idea I had, MK is slowly understanding the monkeys on the mountains. 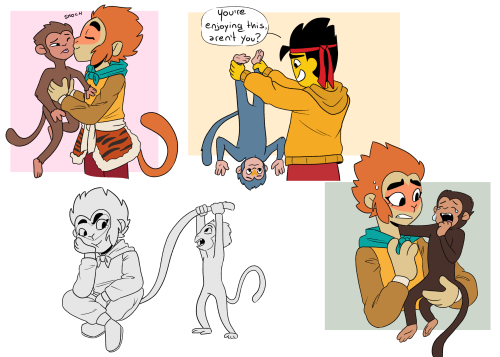 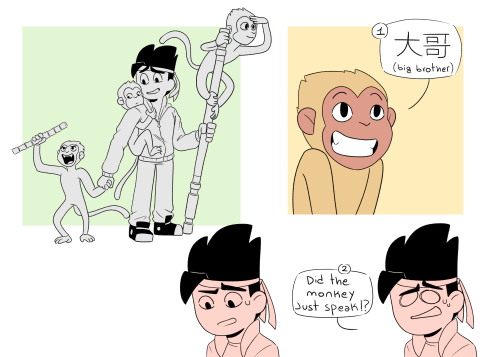 Not me redesigning my jttw sun wukong interpretation again 😳

#smooches him, #I love sun wukong so much, #sun wukong, #monkey king, #jttw, #journey to the west, #jttw fanart
15 notes · See All
chaoseclipsPhoto

A bunch of Sun Wukong art I’ve been working on for the last few days! 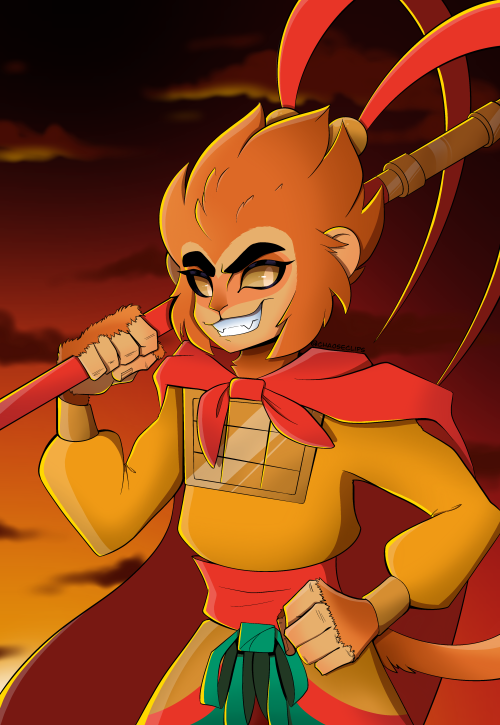 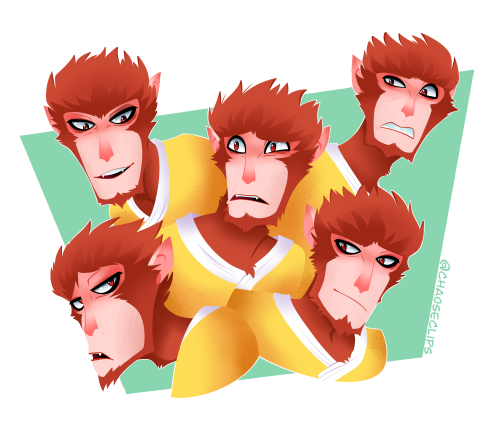 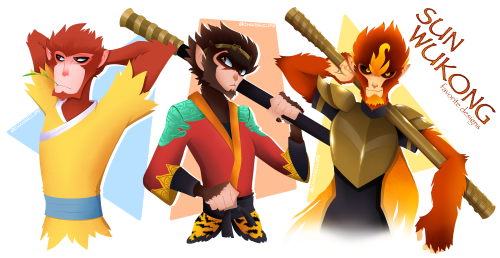 I don’t think I elaborate enough about how much of an asshole MK is in Peach tree AU, honestly the first half of the story is literally just MK but a villain.

MK after learning a few tricks quickly, used a hair clone to do noodle boy jobs and while he himself go and vibe around the city with checking in on the clone every few hours to prevent the stuff from Duplicatnation. MK save the city and all, he keeps on the good side of people he cares about (Mei, Pigsy, Tang, Sandy) to which he appears to just be a little impulsive, but without their knowledge MK have been using his powers for more selfish purposes.

He doesn’t exactly get paid for saving the city. Mk would wander around town and pick a target or two to terrorize into giving him what he wants whether it be an item or to keep their mouth shut, he likes to say that he’s helping the city fight demons out of the kindness of his heart, he deserves a reward right?

This Mafia style crime is of course not approved by the monkey king, to which constantly warns and scolds MK trying to stop him. MK however doesn’t exactly back down, he is pretty smart, after all most things about Sun wukong is in the books, he will use those informations to his advantages.

Then one day, MK slipped up, Mei found out about his dirty crimes he have been trying to keep away from his close friends, Panic spreads as their concerns grow, demanding explanations from MK, who in fear ran away to consult Wukong.

MK pleaded for Sun to teach him some kind of spell- memory manipulation or erasure maybe? So he can make it like this never happened, The monkey king of course refuses, MK then in desperate attempt to try and pry the spell out of Sun, talks about how surely he understands right? The monkey himself had done similar things before- Sun stood his ground.

MK laughed, fine, he don’t need it anyway, he’ll find another way, he can do that, and no one can stop him, now that he thinks about it, There is barely anyone who can stand up against him at all, after he get rid of DBK and other demons, Sun would be retired as well, if anything at all, ruling the world would be so easy, and he wouldn’t have to worry about anything anymore.

The monkey king had had enough, revealing in his hand was the circlet. MK recognizes it immediately and calls it a bluff, Sun Wukong Wouldn’t use that on anyone right? Especially not a mortal boy who can’t possibly stand the pain that even the great sage equals to heaven yields to? Right? - MK knew the answer to those questions, he turned around to run, but it was too late.

The Circlet was a fake, he didn’t know that.

And when it was swapped, Wukong didn’t know either.

I watched Havoc in Heaven (1964) and scene of Sun Wukong taking the Cudgel was too perfect to not make a meme. 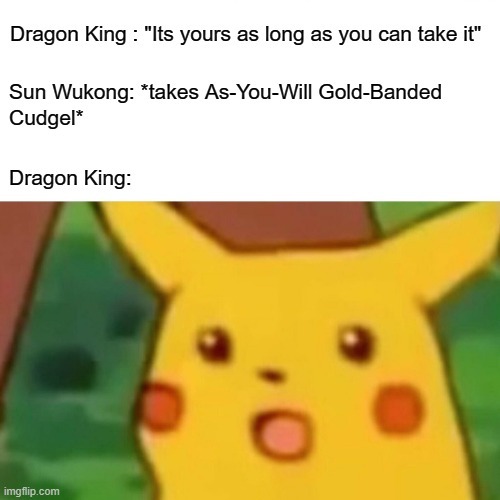 Fun thoughts about Why Sun Wukong would need a successor, for peach tree au.

I mean, he’s (×4) immortal right? And super powerful! And definitely not getting weaker in terms of raw power. The stuff MK does he can do himself much quicker and effectively if needed be.

So why a successor?

I like to think that even though he’s basically never going to die or get weaker- he’s tired, perhaps? Like running out of the motivation to do more, looking forward to just being at peace maybe? He said that he’s ‘retiring’ so basically hes just not gonna go monkey king-ing anymore, maybe he wanted to rest.

But just in case stuff like you know DBK happens, someone should take his place and inherit his powers in order to smite evil demons etc.

Maybe he changed, he doesn’t have as much mental energy to do all that anymore, maybe he miss the rest of his friends wherever they are, he does seem pretty damn lonely.

You know the quote thing I did the other day with the headband? Well, what if Macaque somehow knows the “thing,” annnnd…

MK yelped at the sudden, sharp pain that coursed through his skull like an aggressive drum as the golden band glowed and tightened around his head. His hands struggled and slipped from sweat as he tried and tried again to take it off, the staff he was pinned down to long forgotten.

“Oho,” the dark monkey chuckled, kicking Wukong off of him with a punt to the chest. “Did I say something wrong?”

Wukong gasped for the air that was knocked out of him, but managed to land safely on his feet, albeit a bit sloppy as he was now desperatly looking to check on MK again who let out this piercing scream that shook him to the core. His fur stood on end when the kid screamed again, voice sounding so raw, and fragile, and broken.

“Heh. It still works. ‘Shame it’s not on you this time—” he wasn’t able to say anything more when a hand with much obvious force and aggression covered his mouth, the other pulled him close by the collar.

The eyes that looked directly at his own burned with so many emotions, but anger ruled them all out by a single word.