Dick: Why is Kon crying on the bathroom floor ?

Tim: He heard that I was engaged

Dick: He’s engaged to you though…?

This is my take on a classic a classic AU, which is not really an AU cause it’s imbedded in canon if that makes sense.

So they dont like form a band or anything, well not officially at least, they just one day realise that they they check all the boxes for having a full band so they think why not, lets try it out.

Tim also somehow (cough cough Kon cough cough) gets roped into being the the co vocalist. “what! no i dont sing!” “oh cmon Timmy you know you have a great voice!” “Kon your voice is so much better why don’t you do it” “cause im on the drums, as talented and amazing as i am i cant rock out and sing that well at the same time!” he bugrudginly agrees, even though it takes him a while to get comfortable in the role.

They have band practice a few times but they mostly just play alone by themselves or something cause as much as they hate to prove Tim right they are heroes and the actually do have a job to do.

A lil TimKon bonus- for Kons birthday Tim gets him personalised drum sticks with their hero logos on each and the words “your robin” on one and “my clone boy” on the other respectively.

yeah also this was totally inspiered by julie and the phantoms:)

kon and damian would get along so well guys.

created under suspicious circumstances by an enemy of a hero to usurp the hero, but chose their own path to work with the hero instead. rejecting what they’ve been trained or programmed to do in favor of what they want to do. they both have arrogance as a fatal flaw, and it’s gotten people they care about hurt, but they’ve been trying to grow past it. they also love nothing more in the world than making fun of tim, so what’s better than two of them making fun of tim together?

just,,,,,,kon and damian. they’d be friends. you can’t change my mind.

Wow, so much feelings. First the Teen Titans then Blue Beetle and Booster Gold, and finally Dick and Wally. So much angst. 😨

Tales from the DC Dark Multiverse. 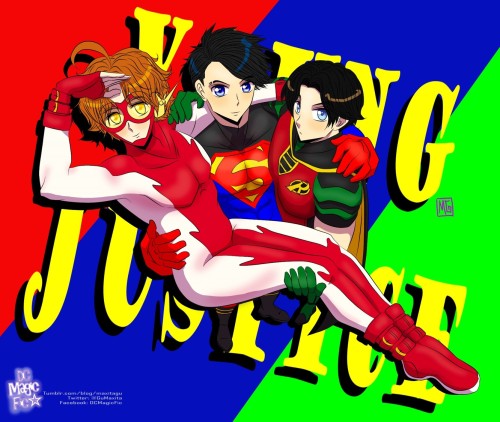 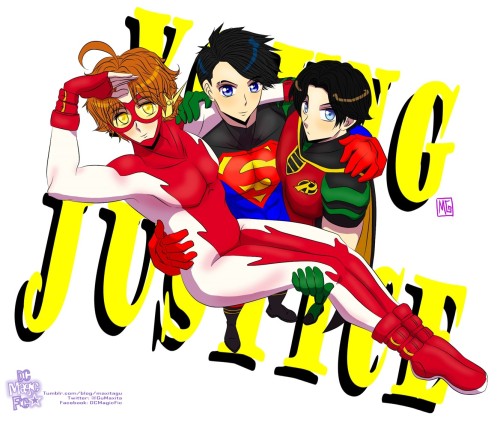 (Taped to the left is a polaroid of Zatanna, M’gann, Conner, and Robin.  The caption reads: “Our new Teammate: Zatanna”)

Zatanna joined our Team today.  Unofficially since Zatara is kinda overprotective of her.  She even joined us on our mission to look for Red and get some answers on whether he’s the mole or not.

This is an interesting concept for mission reports!

(Another polaroid is taped to the right, showing Robin and Zatanna sitting close together.  The caption reads: “How cute!!” with a heart drawn on)

Ooh, I think Robin has a crush!

Well, he is kinda cute…

Perhaps we should keep this kind of talk private. 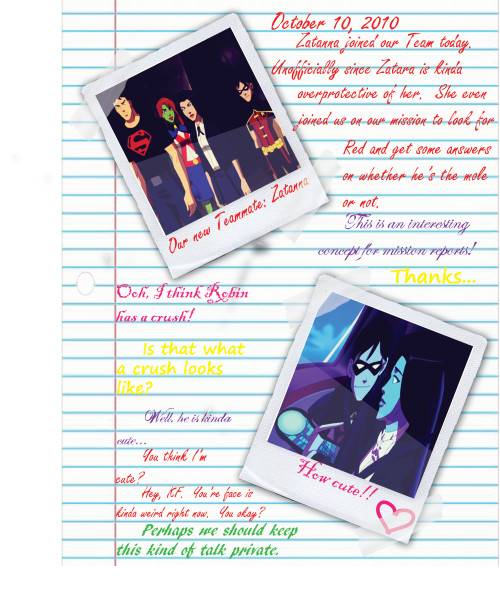 (A polaroid photo is taped to the left side of the page.  The caption reads: “This was a weird mission, not gonna lie”)

This was a weird mission.  What even is an Injustice League and where did they come from?

It is strange that they just appeared to cause trouble.

There wasn’t really any hints that all of these villains were working together.  A distraction for something bigger, maybe?  I’m gonna investigate on my own time and report back.

I will too.  Two heads are better than one.

(A second polaroid is taped to the right, showing Kaldur’ahm as Doctor Fate.  The caption reads: “Risky move by Aqualad”)

How did Nabu let you go so easily?  Kent had to fight to get him to let me go.

He told Nabu that I was not the right host for him.  Nabu is also holding you to finding him a new long term host.

The right one will come when it’s time, I guess. 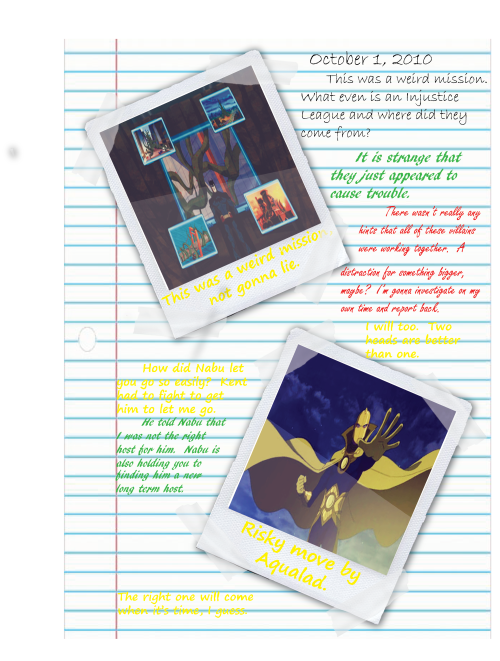 I betrayed the trust of my Teammates.

Even if you didn’t have a good lead on who the mole is, you should’ve told us anyway.  Now you’ve just got some of us thinking that good ol’ Red was the mole.

I’m just saying, it’s a bit of a coincidence that Red turned on us and then, as we’re picking up the pieces, we find out there’s a mole among us.  It’s suspicious, isn’t it?

I can think of someone who’s also suspicious, but I’m not gonna point fingers since she’s proved herself to be a somewhat reliable Teammate.  I don’t want to not trust anyone.

CAN YOU BLAME ME??

You were kinda sketchy in the beginning.  Just saying.

You know what?  I’ll give you that.  I was super sketchy before.

While the idea of there being a mole came from a less than trustworthy source, we still cannot rule out the idea.  I do not want to suspect anyone here, but there may be a source outside of the Team feeding information to our enemies.  And until we get answers from Red himself, we cannot rule him out either. 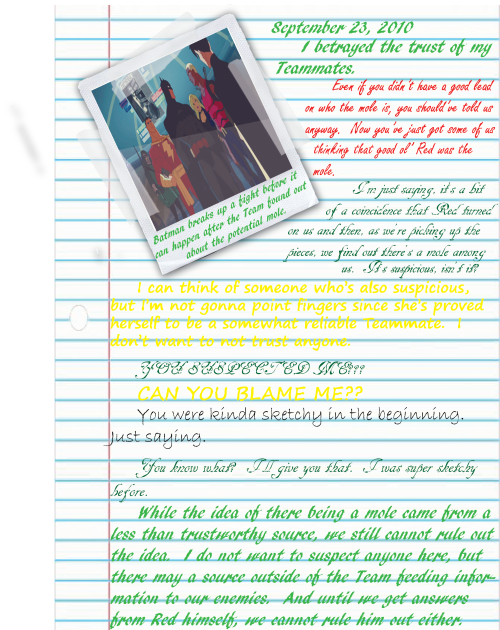 We were attacked in our own HQ by some Red Tornado lookalikes.  And of course, they were smart enough to take out our superpowered teammates first, leaving only myself and Robin alone to deal with them.

I think we had it pretty well handled, considering the circumstances.  Though, the end result was less than desirable…

I can’t believe Red would just betray us like that… It doesn’t seem like something he’d do.

It is odd that he would suddenly turn on us like that.  Perhaps he was not in the right state of mind.

Maybe he was hijacked by one of those other androids?

Both of them were knocked out.  How would they have hijacked him if they weren’t even conscious?

Unless the EMP wore off just as Red tried to apprehend them.  Something could have happened in that split second and made Red turn on us. 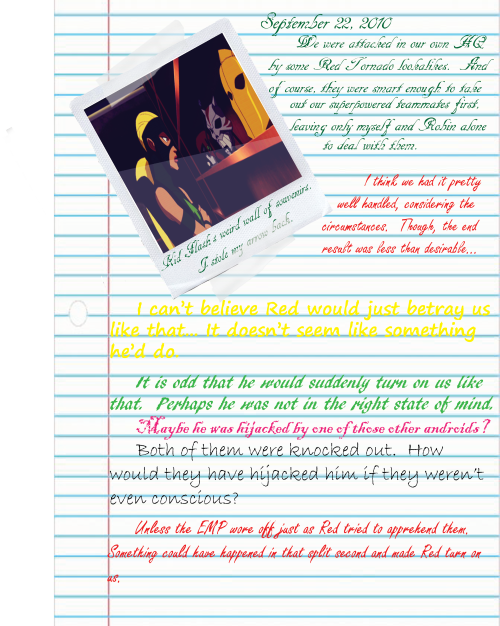 Superboy and I started our first day of school!  How exciting!

(On the left side of the page, a polaroid photo of M’gann in her human disguise is taped.  The caption reads: “Miss M’s first day of school!  Courtesy of SB!”)

It wasn’t that great.

It doesn’t get better.

Aqualad’s lucky he doesn’t have to attend the hell that is high school.

(Another polaroid is taped to the right side of the page, showing Conner Kent picking up a boy by his jacket.  The caption reads: “SB’s first day of school!  Courtesy of Miss M!”)

Did SB beat a kid up on his first day?

He was wearing a Superman shirt. 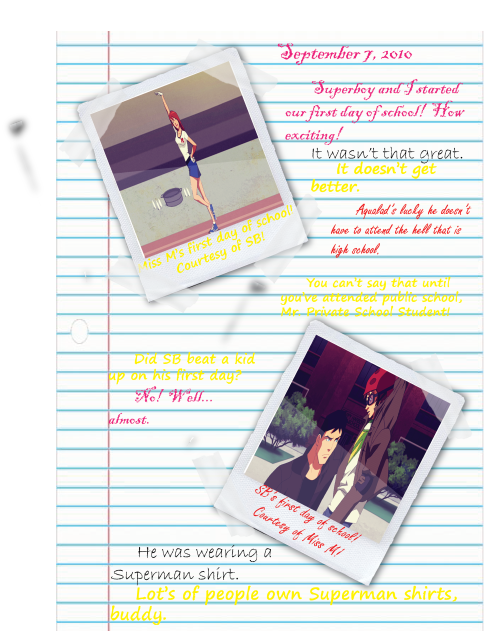 Why do I have a feeling that Yara Flor and Jon Kent will have a thing at DC Future State?

#I don't know if I like it yet because I don't even know the character well..., #But I'm suspicious because they've tried Super Wonder in the past..., #let's see what happens, #yara flor, #dc future state, #future state, #jon kent, #wonder woman, #jonathan kent, #superboy
7 notes · See All
hikariyami1Photo

“A Battle Between Gods”

“I don’t care what costume you or him wears. As far as I’m concerned, you’re my Robin. Always will be.”

“And you’ll always be my clone boy.” 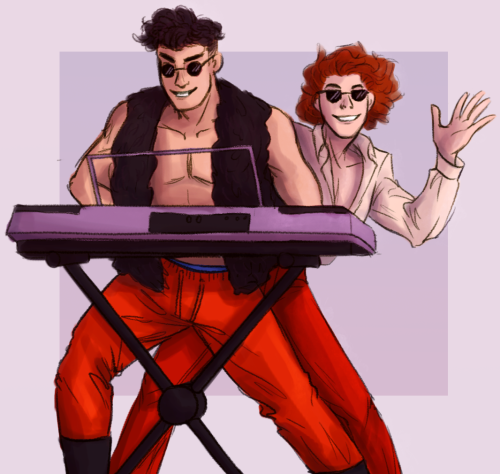 Tim, waking up after being injured: Wait… Where am I?

Kon, trying to be mad because Tim nearly hurt himself very badly when he was being really reckless but failing to hold back a smile: You’re a shameless flirt!