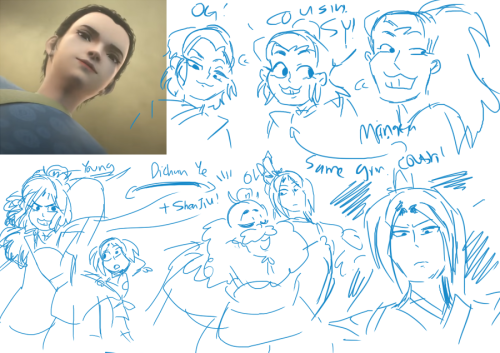 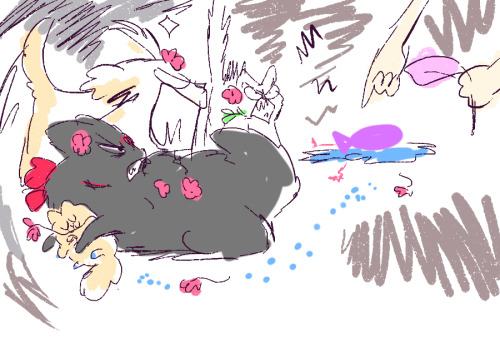 …Good day to all, I have the case of brain worms again, so I’ve been wondering which MXTX protagonists you could kill with a Death Note.

Bitches be like “should I make a foil print” and don’t even wait for an answer. It’s me, I’m bitches.

This is my new favorite thing, ladies and gentlefriends.

Hi! I just finished this drawing of Shen Qingqiu and I really liked it. Wdyt?
I added yellow jasmines because they represent grace and elegance and I also tried to add a peak in the background, haha. 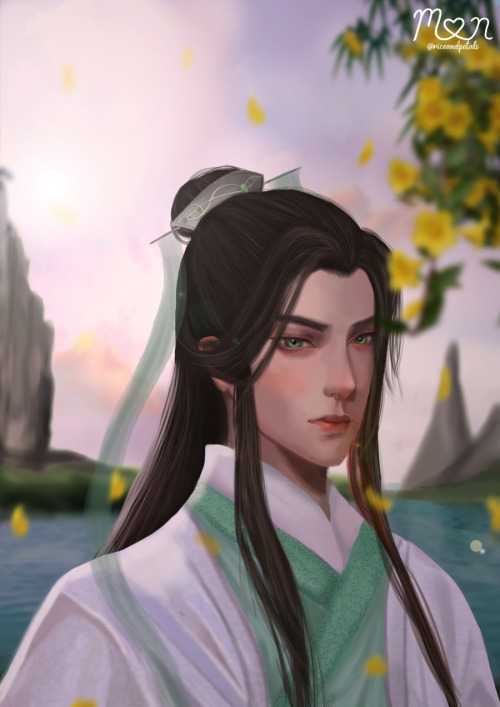 yue qingyuan: you can trust me, xiao jiu.

shen qingqiu: I don’t even trust the way you just said I could trust you.

I think that personality disorders are particularly challenging to diagnose, and we should absolutely not diagnose fictional characters with them. Luo Binghe in particular was under the influence of an evil sword that caused a qi deviation, which adds ickiness to attributing it to a personality disorder because there’s no real life evil sword.

Sorry to sound so harsh; I don’t mean to yell at you! Really. I’m just pretty staunch about this in general! It’s a pet peeve of mine. It’s kind of a thing on my blog. :P That said, I can see why people would read their own experiences into it, and that’s great if it’s comforting.

But yes, I do think she wrote the psychological effects of trauma well. Luo Binghe’s reactions–without pathologizing them–are pretty accurate for a child with extreme abandonment and abuse issues.

This is an extra belated birthday present for @braidedribbon! I hope it will make you laugh 💕

The request had arrived, as many things that Shang Qinghua used to say and do, as a surprise first, and with a total lack of understanding second.

What was chocolate now?!

As it was usual for him, Shang Qinghua had longingly stared at the horizon, his already big eyes looking even rounder and shinier if possible, like whenever he was about to make a demand for his husband.

The same thing happened that time he had asked for noodles, and then Mobei-jun had had to go bother Luo Binghe to properly satisfy his husband’s request.

Mortifying? Yes. But it was worth the trouble, if only to see that big smile take over Shang Qinghua’s features.

For a moment, he had looked at peace, not wanting for anything, not missing anything. As if being there with a full belly and Mobei-jun was enough. The longing for something that Mobei-jun wasn’t capable to put a name on had been absent from Shang Qinghua’s eyes while he cuddled with his husband under the fur covers after that.

Mobei-jun had been thanked plenty and with gusto.

Now though the noodles had lost their magic effect on his cute spouse, while Mobei-jun still craved that feeling of satisfying Shang Qinghua completely.

The food that he put on their table daily was not enough to give him back that first chill, no matter how much Shang Qinghua tried to convince him that he was fine with it.

It had taken lots of pestering on his part to finally have an answer from his husband about what he really desired to eat.

And when Mobei-jun finally heard of his husband’s desire… He was baffled.

He had no idea what this ‘chocolate’ was now.

Probably something that humans only knew.

Not letting his lack of knowledge deter him from achieving his goals, Mobei-jun had gone visiting in disguise human markets and asking about that mysterious food, yet no vendor had ever heard of such a thing.

No matter how far and wide Mobei-jun roamed, no seller nor cook was the wiser about chocolate.

With his doubts keeping him company, Mobei-jun played his last card.

Asking to be received had not been a difficult matter, but having Luo Binghe roaming around the room while he questioned the peak lord was not easy on the nerves. It wasn’t like Mobei-jun was trying to steal his mate! He was there only to satisfy his own! And peak lord Shen Qingqiu was too scrawny for Mobei-jun’s taste, second of all.

But that wasn’t what mattered. It was chocolate that really was of importance for Mobei-jun.

When asked about the coveted chocolate, peak lord Shen Qingqiu’s eyes opened wide as he had been stabbed, making Mobei-jun wonder what actually was hidden behind that enigmatic food.

The only answers he managed to get out of him before a territorial Luo Binghe kicked him out, was that it belonged to the land they hailed from. It didn’t help at all.

Shang Qinghua had always refused to divulge that information about himself, and Mobei-jun had let him do as he pleased.

Now though, that revealed itself to be a problem.

It had already passed some months since the day that his husband had requested the infamous chocolate from him, but Mobei-jun wasn’t one to easily give up. Not when he was so powerful and fuelled by love.

In a last attempt to obtain the precious food shrouded in a veil of nostalgia, Mobei-jun opened a passage in space and entered.

On the other side, a loud night awaited him, illuminated by pink, green and blue lanterns. The smells were all foreign to him, no demon around as far as he could tell. Only humans in odd carriages without horses and songs in a language he couldn’t understand.

In what kind of place had he ended up in?!

(this is on AO3 in my second round of moshang ficlets)

And here are the SVSSS items available based on my discussions with the Vietnamese publisher:

*Since the books and the silk painting are really heavy, I have included a deposit for international shipping in the above prices:

If the actual international shipping cost ends up being higher/lower than the deposit, the difference will be adjusted in your second payment.

**Please note that shipping costs for the other items will be included in the second payment.

***When you enter the total cost in your pre-order form, please just use the prices listed above - there’s no need to do any calculations or adjustments for the deposit component :)

In the event that stock is limited, orders will be allocated on a first come first serve basis using the timestamp of the form submission.

Edit: If you ordered a SVSSS merch set in my previous group order, you have the option of ordering just Vol 1, 2 and/or 3 merch set on their own to complete your collection. The price is 1/3 of the listed price of the merch set and you can just note it in the ‘additional items’ section of the form. :)

Luo Binghe rises up and Shen Qingqiu sits up with him, clutching onto his shoulders. One of Binghe’s hands wrap around his wrist and Shen Qingqiu frowns, tries to examine his face and see what’s wrong. His eyes are still their normal colour and the red seal has yet to appear on his forehead, yet there is something off by multitudes about Luo Binghe.

“Binghe, speak to this master,” Shen Qingqiu says firmly, and Luo Binghe gives him a strange look. Shen Qingqiu can’t place it and he leans forward, intending to get closer to see better. But the hand around his wrist instantly tightens to the point where it hurts, and Shen Qingqiu lets out a squawk of pain.

“Why do you keep calling me like that?” Luo Binghe returns, and Shen Qingqiu’s eyes widen at the way the words are devoid of any emotion. It is nothing though, compared to the force of what Binghe says next. “Who are you?”

Or; Luo Binghe develops a hole in his memory in the shape of Shen Qingqiu.

so if i’m in love with the main character of your novel who’s an overpowered and beautified fantasy version of you and is trying to find catharsis and meaning while having absorbed all the messages of toxic masculinity only to wind up frustrated and embittered even having and perhaps because of having met society’s conventional milestones and has abandonment and self-worth issues stemming from a neglected and poverty-stricken childhood and your version of an ideal man is a cold and prideful person who was born rich and is incredibly prone to miscommunication (partly?) because of having been isolated and persistently lonely since childhood but is also capable of great loyalty and we’re also the impetus for the cause of each other’s respective deaths because of our (almost entirely indirect!) back-and-forth over something that you created and i consumed  … then … ?

#the scum villain's self saving system#svsss#the author is dead. the reader is also dead.#sike! actually they both killed each other#and (bc?) neither of them treated the other as dead /while/ they were alive!#vocables#i was just rereading the last airplane extra and chapter 81 and. man.#they're both so grudgingly happy with their own stories#and in part that’s sth they owe to each other!!!#they both admit it!#i’m just.#on one hand#that’s a hell of a relationship to have with somebody#on the other hand#it can also be summed up like this: bro...
28 notes
teiichans
Text

SQH: MBJ took my breath away.

SQQ: Yeah, that’s usually what happens when someone punches you in the throat.