who was your first bias?

i was introduced to exo through chanyeol’s ost in goblin. i thought he was the strong and silent type only to later find out that we’re the. same. person! so chanyeol was my accidental bias :D

who is your bias now?

what was the first MV you watched by them?

growl! it was the first search result when i looked them up

if you could listen to one of their songs for the rest of your life, which would it be?

who would you want to see them collab with?

what (MV) concept do you want to see them do?

have you ever had a dream with any of the members in it?

if you could spend the day with one member, who would it be and what would you do?

i’d obviously want to spend the day with soo doing classic soo things. if not him i’d like to spend the day with…uhh - okay i thought long and hard - i need time to open up and be myself and i can be extremely awkward meeting someone for the first time, so maybe chanyeol. he made soo feel comfortable when they first met haha so going by that logic, i’d like to get a nice lunch with him, maybe go to the gaming arcade later…get comfortably competitive… loser buys chimaek! 🤷‍♀️

which member do you think you would get on with best?

which member do you think you would argue with?

arguing for the sake of argument - baekhyun and chanyeol -_- i think we’d be chaotic.

if you had to let one member scroll through you tumblr, who would it be?

jongdae and yixing - i feel like i can trust them :)

thank u sm for tagging me @yaraaimsakul​ !!

not tagging anyone bc i’m so late sldkfjsdl but if u want to, pls do this and say i tagged u!!

i was tagged by @lizlovesharry (thank you babes!!!) to do this so here i am <3

rules: put your playlist on shuffle and tell us you’re first ten songs

from your creations, choose gifs and do a split of before (left) and after (right) adding your coloring!

i was tagged by @katnisseverden and @veerledejaegers, thank u sm fiz and soph!! this was so fun to doooo

(process under the cut)

#god this was hard slfjslk#i never save my colouring so i had to do these all over again whoops#but i hope it looks okay?#this was rlly fun thank u sm for tagging me!!#tag games
2 notes
taera
Text

thanks so much @nxsmss for the tag! 💗

rules: we’re snooping on your playlist. put your entire music library on shuffle and list the first ten songs and then choose 10 victims

thank you so much @red-hot-children-picker for the tag🥰

RULES: we’re snooping on your playlist. put your entire music library on shuffle and list the first ten songs and then choose 10 victims

bonus: the phoenix - fall out boy (it was literally the eleventh song and I’ve been obsessed with it for two weeks now, so I included it)

tagged by (the talented, brilliant, incredible etc etc.gif) fra @cindyfelicia 🥰🥰 to post your lock screen, most recent song you listened to, and the most recent picture you took!

lockscreen is art by @dappermouth, photo is the rainbow i saw two weeks ago  and the song i didnt know if kai’s ride or die counted bc it wasnt the full version so i added the last song from spotify. 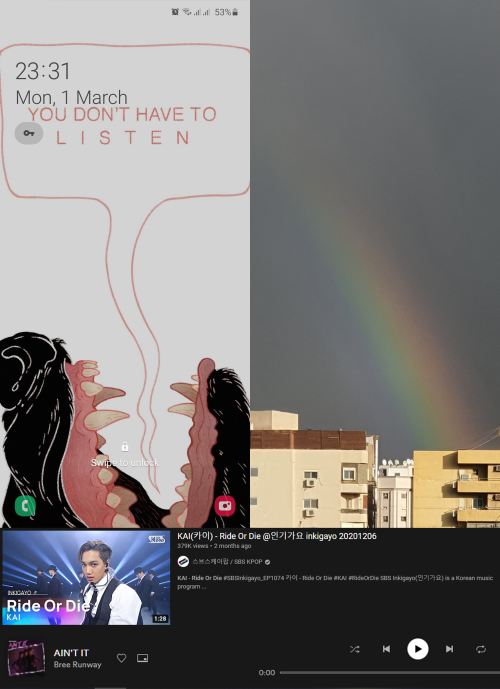 tagged by @classicrebel thank you so much for tagging me, this has been in my drafts forever, sorry it took so long! 💞

i don’t know who’s been tagged in this earlier so whoever want to do this go ahead - and tag me! ☺️

rules: the first nine pictures on your pinterest feed are your aesthetic

as you can see, my pinterest is filled with mostly harry, i sometimes look for makeup and tattoo ideas and then some stuff for my fic arts, pretty much that’s it lol

the goddess that is @fadotropical tagged me to list my On Repeat playlist. thank you very much <3 here it is!
I only use Spotify to listen to the songs I don’t have downloaded on my phone (¡qué viva la piratería!) so…

#tag games#i'm sorry it took this long!!#idk why but tumblr never shows me when someone mentions me in my sideblogs :(((
0 notes
binniesthighs
Text

Make a moodboard based off of your profile pic!

Thank you for tagging me darlin’ @lilixeu​ <3 ​

post your lockscreen, most recent song you listened to, and the most recent picture you took!

rules- tag some mutuals and ask one question

tagged by: @forfakingfairness (thanks for the tag by the way i absolutely love being tagged on stuff!!)

question: if you were a genre of music, which one would you be?

answer: we’re gonna go with alternative on this one because it’s so vague and catch all that i could get away with changing any number of things about me on a weekly basis and it would still fit??

mutuals: i have no idea who to tag rn so if you see this and wanna answer it please just pretend i tagged you lmao

my question: if you could choose to be any sea creature what would you be?

i was tagged by @chelsfic, @safetyhazardfics, and @uv-duv to post seven sentences from one of my WIPs and to tag seven others — thank you!! (i continue to be fully in a different fandom here so double thanks for tagging me despite being aware of my Proclivities sksksks)

For a while, they are alone, but soon new human souls begin to join them. Sons of Eve, granddaughters, great-grandchildren. Lucifer hardly looks at them; he gives them all to Lilith to do with as she pleases.

At first, she just plays with them, but her tastes darken quickly. Kisses turn to bites; pinches turn to scratches; tickles turn to slashes. Lucifer watches his love turn to hate as they scream and Lilith laughs, always fixing him with that same smile when she is finished with them.

0 pressure tagging: @malglories @woahthisguy @neviart @notquiteinsane @sbarbsber and anyone else who would like to do this! (i can’t tell who has already been tagged and who is currently doing wips im sorry)

#VERY much copycatting on the aotc choice but listen. ive watched that fucking movie TOO many times. i know the screenwipe transition cues#avengers 1 is one of the few marvel movies i still enjoy watching lol#this really is my personality in 7 movies huh#tag games#i am tagging people i don't normally tag 😳 11pm no rules#<- saying this to conver up the anxiety ajkhdksj ily all
10 notes
thirstworldproblemss
Text

rules: post the last line you wrote (from any wip) and tag the same number of people as there are words

tagged by: @mandorush (here 😳🥵) & @thosewickedlovelies (here 👀👀)   Looks like Santi’s about to be shown a couple of good times, and I am HERE for it!!  Thanks for thinking of me, loves 🥰 and please, oh please, tag me in those fics when they’re finished!

The Last Line I wrote …and for once it’s not p.o.r.n. (guess we’re waxing poetic today, babies):

The warmth of that spreads through your chest, aching as it presses against your ribs as though your affection for him is too vast to be contained by mere flesh and bone, and so what else can you do but wrap your arms around his neck, fingers sliding into the soft curls there, tilt your face up, and press your lips to his again and again, trying to write the story of your love for him there one gentle kiss at at a time.

Wow, that is one clunker of a run-on sentence (this is why editing is a thing, kids 😆).  Apparently it’s 83 words, which is most of the way to being a goddamn drabble.

No pressure tagging (there is no way I’m tagging 83 of you 😅):
@alwaysbethewest @frannyzooey @ithinkhesgaybutwesavedmufasa @ithinkwehitametaphor @maybege @pedros-mustache @songsformonkeys   Also: @keeper0fthestars & @astroboots (pretty sure you two have already done this recently, but I’d still love to see more of what you’re working on! 😘)  As always, if you wanna do it, then please consider yourself tagged even if I didn’t list you, and don’t forget to tag me so I can see what you’re working on!