Qrow: I DONT KNOW! WHAT AM I SUPPOSED TO DO WITH HER-

Qrow downed the whiskey in one and looked back at the photograph in front of him. They had been so close. Now… Tai was on Patch, Raven was somewhere in the wilds of Anima, and Summer…
He waved for the bartender to bring him another drink. A double, this time.

Hey!
A poem for  TaiyangxSummer? YES!
www.instagram.com/p/CKSES7ZBZl…
Fanart made by Luluchan92, commissioned by me, in my gallery. 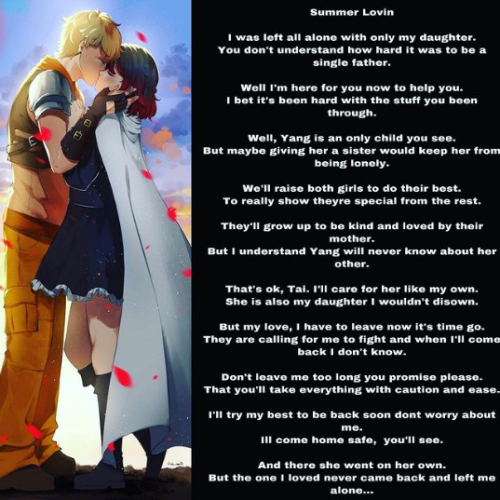 Tai charged Hazel fist-first, roaring. Why were his legs so slow? Not his Semblance; that leapt through him like sparks from a flame, pulling him like a comet through the languid minutes, but the last of those sparks had blown out along with his aura and, like an uncooperative lighter, each step refused to catch. Hazel didn’t even try to dodge his assault. Sneering, he moved to swipe Tai aside.

Qrow didn’t need to pick the lock to Tai’s room. He could have kicked the door down, or punched a hole in the wall, or broke a window. He picked it anyway. The way his luck went, this was gonna go poorly. He could at least pretend to respect Tai’s craftsmanship.

“Up and at ‘em,” he called, the familiar mission wake-up call cold and jagged on his tongue. “Wakey, wakey, Sleeping Beauty; you got stuff to do and mouths to feed.”

Tai’s answer was little more than a grumble from under the covers. Rolling his eyes, Qrow threw the blinds open, revealing the mess to the light of day.

My god, those tall kitchen cupboards. What the hell.

But also this scene. What the hell. This is just - repression and avoidance of actually talking about personal feelings and hiding them behind jokes - I - hmmmmmmmmmmmm Xiao Longs!

Okay so I know we talk a lot about human Qrow having bird tendencies but does he have a flock of crows he hangs with in bird form?

Like I’ve seen a lot of posts about crows playing and recognizing humans and I can’t help but think that a flock of them would have seen one lonely crow and adopted him (although I could be wrong I don’t know much about crows).

Imagine just a flock of crows sitting outside Tai’s cottage in patch (because crows are smart and they’ve figured out that crow!Qrow is also human Qrow) only coming out when Qrow steps out. At first it annoyes him cause who wants birds following you everywhere, but eventually grows fond of them.

And like just imagine Tai going off on Qrow about something (Raven leaving or Summers death or his alcohol addiction) and the birds see how upset Qrow is and Tai is then forever just on this murder of crows shit list. Tai tries to grow vegetables and the crows just dig the seedlings up and take bites out of any mature vegetables. Tai eventually has to give up because even a scarecrow doesn’t work. Secretly though they save some of it though and bring it to Qrow who’s confused but doesn’t question it.

Also it gets to the point that they attack Grimm for him too, like normally they’d take off but they see Qrow trying to fight off this huge predator alone and they began swooping in to distract it. Qrow being both greatful but also terrified because he’s watched some of these birds grow and named them.

One of them gets injured and Qrow carries it back to civilization mindful of its injury. Slowly learning over time how to fix broken wings and feet and a number of other injuries because he’s grown attached to them even though he knows he shouldn’t.

Qrow due to his job finds nests with eggs in them parents (possibly dead) and he takes them home keeping them warm and safe, hoping beyond hope that they will hatch sometimes he’s lucky and they do, other times not so much. Not just crow eggs either but he’s definitely learned what those ones look like but robins,sparrows seagulls too. Most of those ones leave, but the crows have a tendency to stay (cause there’s already a established flock in the territory)

Because I’m a hopeless shipper too I’m just imagining Qrow on a mission in Argus and a leviathan attacks some of the cliffs. He finds a single kingfisher egg still intact the rest of the nesting area destroyed and a lot of the birds have been either injured or killed. The locals start to come over to help and Qrow keeps the egg cradled to him as he starts working on helping the birds, his flock hovering around him. From that day forward the people of Argus associate the great hunters man Branwen as the great bird keeper. Qrow knowing that there’s a slim chance that this egg will hatch, and knowing his bad luck will likely kick in but tried saving it anyways. Somehow it hatches but it’s smaller than it should be and Qrow nurses it back to health. It refuses to leave no matter how hard Qrow tries to take it back to its natural habitat, snuggling in the hood of his sweaters or resting on his shoulders or hair. It is the only bird other than the crows to stay.

Somehow, somehow! His nieces don’t realize this, maybe because they refuse to come out for anybody but Qrow and they only get a vague sense of foreboding as they travel. However once in Atlas they’re looking for him (maybe to train maybe just to talk) maybe Clovers there too, but they catch him sitting in the garden quietly talking, so they sneak over and Qrow is just gently running his hand over their feathers talking to them

“Matilda it’s not nice to to pull out Briars feathers” the crow puffs out there feathers as if offended before squawking in indignation. Qrow cooing at them as they huddle around him. The kinfishser (I’m going to call them Queenie just because I can) perched on his head. Clover realizing that this is THE bird man from Argus the one he’s only heard stories of and may or may not have a crush on him because of said stories.

Oh! Also Qrow keeping trinkets/ shiny things on him to give to his flock as presents, keeping extra rings on his fingers so even if he’s away from them or finds new crows/birds or alternatively giving them to his favourite birds.

I just need Qrow interacting with birds y’all thanks for coming to my Ted talk. 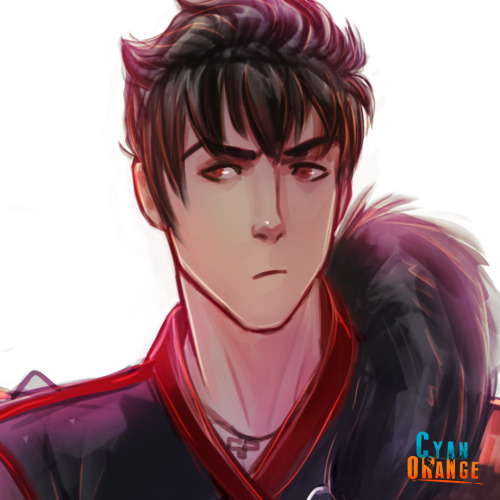 “Access denied,” The Atlesian guard said in a brusque tone. He was a mercenary, not a soldier. Summer nodded politely and walked back to where the rest of STRQ was waiting.
“Well?” Tai asked, almost bouncing with anticipation.
She shook her head. “Time for plan B.”
Raven and Qrow smiled.

now that she’s married to ruby, weiss has to go to the xiao long-rose-branwen reunions and she’s terrified

Summer, about Raven: I think she has a good heart.

Taiyang: A good heart? I’ve noticed you staring at her “good heart”.

Taiyang: There is no I in ‘team’, but there is one in pizza.

*rises from the dead* Hi. I realize that this is my comic and I can make whatever ships I want

Qrow: I like men and women, why the fuck am I still single?

Tai: I guess you’re just meant to be…

Tai, putting on sunglasses: Bi yourself.

Qrow: This is why my sister left you.

i don’t know. in general i’m pretty much a “never say never” kind of person, and in this case there’s still so much we don’t know about, that it’s hard to say.

though, with the way things are rn, i think it’s probably closer to being sailed than not. my expectations are low, so if they manage to exist in the same room without it being awkward, that would already be a win for this strq fan 😅

#rwby#taiyang xiao long#raven branwen#tsundere-bellwether#ask.strqyr#i feel like this is such a non-answer and i hate it but i don't know how to phrase it differently#struggle of my life
10 notes
bridgyrose
Text

Tai: You know you can relax.

Ruby: *pacing around the dorm nervously* No, I cant.

Tai: It’s just a final for the semester.

Ruby: That’s why I cant relax!

Qrow: *polishing his weapon* Never thought I’d see the day when Ruby would worry about a test.

Raven: *getting up and wrapping her arms around Ruby’s waist* The boys have a point. You should relax. Worrying about the worst will just make it happen.

Ruby: *stopping in her tracks, feeling weird about the way Raven was holding her* I wasnt prepared for it. What if I fail? Then I’ll get kicked out of Beacon and I’ll never be a huntress-

Raven: And you’ll be fine. Tell you what, if you pass, I’ll take you out for a congratulatory dinner.

Tai: *leaning over to Qrow* You know, I’m starting to think I dont have a chance with either of them.

Qrow: And what was your first clue? The fact that neither one has shown interest in you? Or the fact that Ruby seems to be more interested in my sister?

Tai: *sighing* You’ve been waiting for this, havent you?

Qrow: *smiling to himself* To tell you what everyone else has noticed for months? Of course I have.

Summer wakes to a tiny hand hitting her face, she lets out an annoyed huff, cracking an eye open to see that Ruby had turned in her sleep, face restful for the first time in a long time. Ruby’s rest had been sporadic the last few years and in hindsight it is likely connected to the absence of her uncle, a source of both Yang and Ruby’s joy.

I love them. I will name them