The group is in Vacuo shortly after Atlas, and a bunch of Shade students are making fun of how small Oscar is (though he’s drinking his milk~)

Jaune: *grabs Oscar and carts him away*

Nora: *brandishes hammer at the students*

Ren: *glaring at them before dragging Nora with him to Jaune*

Nora, pouting: NO ONE messes with my 14 year old son.

Oscar, embarrassed: yeah, uh, it was several months ago back at Atlas. I didn’t think to tell you all, since, you know, you were so b-

Nora: this is a crisis!

Jaune: *dials Ruby* Ruby, we have a problem!

Ruby, over comms: oh no. How bad? Do you need back up?

Jaune: yes, I need immediate back up. This is an emergency.

Ruby, muffled: QROW WE HAVE AN EMERGENCY

Janurwby day 18: Teams/ Partners/ Found Family
.
Team ALPN/ JONR cause the fact I haven’t drawn them for Janurwby yet is a crime imo.
.
I absolutely adore team ALPN’s dynamic cause after the events of vol 6 they just accepted Oscar as Oscar and I just think that’s sweet.
.
Team ALPN’s dynamic is basically 3 teens find a younger teen and sign adoption papers. Now that younger teen has 3 older siblings and they can’t do shit about it.
.
They’ve come so far since vol 6 🥺
.
Honestly can we talk about how much Pyrrha would’ve loved Oscar if she was still alive. She would’ve offered to train him like she trained Jaune. She would be like supportive mom friend all the way with him.

I have never done this, but I wanna give it a shot

We all know that Jaune, Nora, Oscar, and Ren (team JNOR) have been here for a while and are definitely very popular among the fan base. And I know that sometimes CRWBY sees posts if they’re popular enough.

We want individual trailers for team JNOR!!! Please and thank you!!!

(Tag your mutuals if you want) 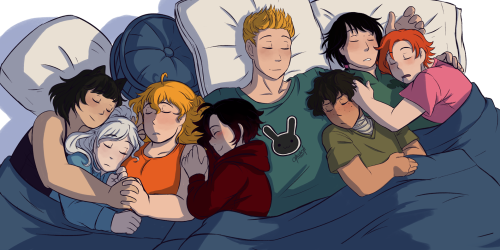 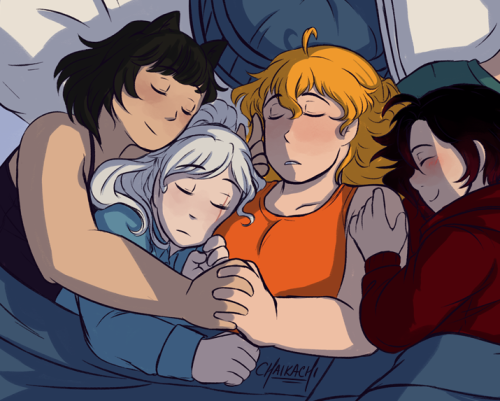 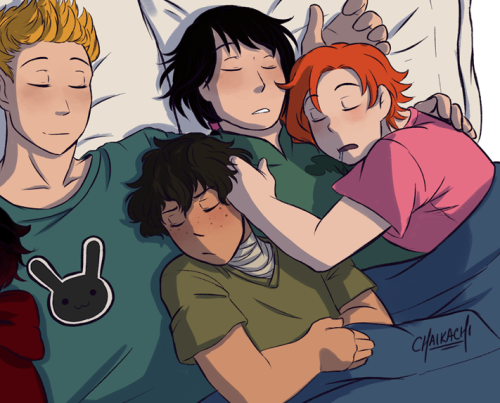 Imagine one day Nora just wakes up and tells her boys “we’re gonna celebrate my birthday today” (because, as an orphan, she probably doesn’t know when that crap actually is).

And then Ren is like “Nora, you said that five months ago.”

And Nora’s like, “I just don’t understand why we only take ONE DAY a year to celebrate ourselves. I think I deserve at least four.”

Nora, pulling out calendar: “… so, strategically, for maximum party opportunity, I should put my birthday in, like, August or September.”

Ren: *drags hands down his face*

Jaune: *is helping Nora find the day of equalibrium*

A random compilation for no particular reason

hello again!! this time, heres a very bad doodle/idea of the maycinwin roleswap of the v7 ep2 reunion

[if you cant read it, heres the translation-

cinder: why are they in chains?!

Seeing Jaune and Ren vouch for saving Oscar before blowing up Monstra and thoroughly taking down the Ace Ops’ beliefs of replaceability was… something special. Seeing Ren cut through their BS

“He’s our friend. We will do whatever it takes to find him because we care about him.” - Lie Ren

“No one is replaceable.” - Ren

Team JNR didn’t just move on, and they did not just replace Pyrrha because she can’t be replaced, and because no one can be replaced. Still, each of them kept moving forward and growing despite the loss. Oscar hung around with them because they watch out for and care for him, despite the hand Ozpin had in Pyrrha’s loss.

When the group makes it to Vacuo

Ruby: Huh I wonder if will-

Oscar: Oh Gods what the FUCK

Cfvy meets up with the rest of the group.

Velvet: Fox you startled them. Sorry he’s a telepath.

Oscar: oh thank the gods, I almost thought there was another disembodied voice in my head…

Everyone stares at oscar wide eyed.

Jaune: Trust me it’s not your decision.

Harriet: There are people in danger because you selfish kids-

Jaune: THE GROUND SPLIT OPEN! HOW IS THAT OUR FAULT?!

No granted, the team was able to rally from the previous episodes in very short order, so no missing farmboy angst which is fair, there’s only so much time to allocate in a single season. I love seeing Ruby take the initiative and a firm stance on getting to Amity Arena, and I look forward to seeing her new temporary team fight their way into Atlas.

Yang’s more pragmatic approach was handled well and to see the boys of Team ALPN, a d it’s great to see Jaune being the mediating and even wise presence within his team.

And that Nora and Oscar hug… 💖💚

But I have so many damn questions starting with what the hell is going to happen with now that Penny isn’t just a target for Cinder, but possibly Watts as well. Neo has a major grudge against Cinder but she isn’t going to be chummy with the heroes either. Salem being a devilish dark lady is always a treat, even if my legs are quivering in fear…

This is gonna be a dark, dark volume, the like of whcih we haven’t seen since Vol 3, and I’m not convinced that all of them (RWBY and ALPN)will make it out in the end…

Well, I promised a JNOR comic months ago, and I finally finished the whole thing. It’s definitely not my best work, but it was fun. My first comic, actually.

(Read down then right) 😣

(That last panel is kinda garbage, but I don’t care enough to fix it) 🤷🏼‍♀️ sorry.

The long promised JNOR comic!!! I need a name. 😂 I finished lining the first page (which is by far, the hardest), but my first day of school is tomorrow. So I don’t have time to do the rest. I promise it’s drawn, it just needs to be “rendered.”

(Pretend that was an Ursa 😑)

That’s it for the first page! The next few are coming soon! Thanks!

(I’m so so so sorry for my cursed handwriting) 🙏🏻 forgive me.

Details! Nora’s wearing a TON more metal. She has her symbol on her shoulder guard. And are those hEARTS on the bottom of her dress? Oscar has the half-cape, a vest underneath. Ren has a bun, like when he was a kid. He’s got a thing of fabric draped over his belt, which has his symbol on it.

Isn’t this fun? I may do some other characters, but I need to find my motivation again. I woke up waaaay to early today.

He will find a good napping spot, curl up, or maybe sprawl out, and just pass out.

He doesn’t do it during the school day but if he can squeeze out a nap after classes and before training, which leaves him about 4-5 hours, he most definently will.

The first time he disappears for a nap, his team and team rwby freak out, because where did the blond noodle go?! He can’t protect himself, and he has no idea what self preservation means!

They find him napping in the gardens. It takes them about 2ish hours of searching to find him.

They all thought that was his normal spot, so the next time he disappeared, they check the gardens. But nope! He was asleep on the roof, of the clock tower. No one really knows how he got there.

Now they try to see what the craziest place they can find him will be. Right now Ren is winning because he found Jaune in top of one of the launch pads at the cliff. He had to get a sack of flour and preform some Indiana Jones levels of bull shish to get jaune out of that one.

Sometimes if the person who finds him are a tired, they will join him.

And hew boy, if someone finds him when it gets cold, they cuddle up sooner then you can say nap, because Jaune is a human heater during winter, and a human A.C. unit during summer.

There have been fight over who gets to have him for the night.

I like to imagine this happens at Beacon, and continues on during the series, and the people who join them later on keep finding him in weird places.

Maria one found him in the bullhead’s thrusters, they almost had a roasted jaune.

I really like this one and want to see it as a fic!

Hey I sometimes take screenshots from shows and edit them on my phone with an app called Picrew for fun. Here are some recent RWBY ones I’ve done. I hope they’ll be of some interest to people here, they don’t get a lot of attention on Twitter but some of them have done alright on Instagram so who knows.

This took me way too long to put together. My brain is tireddddd.

(yes, clover and qrow from ch12 are their own separate characters) 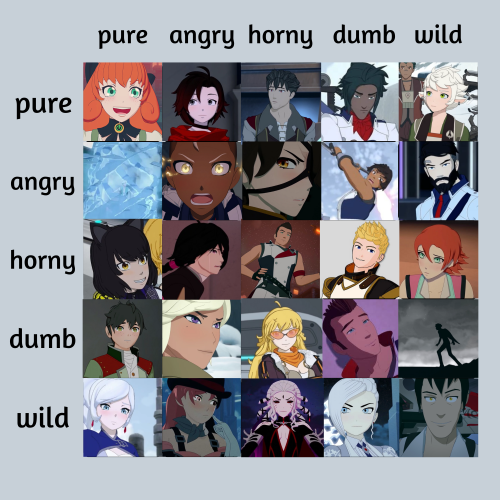