new series of limited palette doodles bc i haven’t done them in forever!! 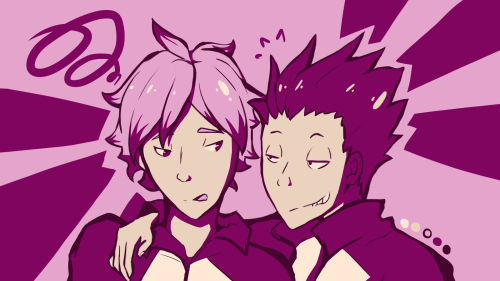 I’m bringing you really wonderful and epic series to read!!

1. Don’t Make Me Walk When I Want To Fly

“I don’t want to leave without an apology”

After Hinata rushed from their fight he ended up in a car accident.

But when he wakes up he’s not dead and he’s not in a hospital either.

Hinata has to live the same day – the day when he and Kageyama fought – over and over again until he finds a solution where he could get out of the time loop.

But when the time comes, will Hinata have enough strength and bravery to do what has to be done?

An AU of what could have happened after the fight in Season 2 Episode 5.

4. This Version of Me

Personal Notes: Warning guys, if you read this series go through the tags. Seriously, GO THROUGH THE TAGS. Some of the stuff may be triggering.

The series has 5 works, out of which 4 are completed. I’ve put the description for the first work. It’s also the starting point. If you read it out of order you’ll not understand anything.

Seriousness aside, this series is one of the best I’ve ever read. Give it a try!

Haikyuu at Hogwarts by Killthespare

Pretty much as the title suggests: a Hogwarts!AU with Haikyuu. It’s planned as a seven book series so definitely a longer series. This first few can be read out of order with only minor confusion (about as easily as the first few Harry Potter books can) but there is an overall series plot in addition to the individual plots of each story. As of the fourth book, the previous third story should really be read before the fourth or later books.

So far, the stories in order:

1.) Shouyou Hinata and the Mirror of Erised (complete)

2.) Koushi Sugawara and the Heir of Slytherin (complete)

4.) Tooru Oikawa and the Triwizard Tournament (in progress)

tensemi - “Sharing is caring, now give me the hoodie!”

It was a universally acknowledged truth that Eita’s fashion style sucked. But every once in a while miracles happen - and today, Satori bore witness to one such miracle.

Eita had bought a new sweater and it looked cute.

At first, he had been certain that Wakatoshi gave it to him. There was simply no way it was Eita’s. There was no fake fur, no cut-off sleeves, no glossy material. Just a simple white sweater with a compass on it that Satori loved. It was truly mind-boggling.

“And you’re sure you bought this yourself?” Satori asked for the third time. Eita rolled his eyes and flipped him off. Pretending to be offended, Satori drew up to his full height. “Excuse me, but there is just no way! Give it to me!”

“What? No.” Eita protectively cradled the hoodie to his chest.

Satori made a grab for the hoodie but Eita was faster than him. Before he could reach it, Eita had already hidden it behind his back. Satori wasn’t deterred though, he tackled Eita to the bed he tried to tug it out from under him. “Gimme!”

“Sharing is caring, now give me the hoodie!”

“No!” Eita said exasperatedly. “What do you even want with it?!”

“It can’t be yours! I have to show the others, check the facts.” Satori pretended to think as he tapped his lip. “Maybe keep it for myself. We can’t have you suddenly develop a fashion style, the world is not prepared for that.”

For a moment, Eita stopped fighting him and narrowed his eyes. “This is either an insult or a compliment and I’m not sure which one.”

“I’ll tell you if you give me the hoodie.”

send me a ship/character/platonic relationship with a category and a number!

#a² (answered ask), #anon, #tensemi, #i kept their relationship deliberately vague msdnfhb, #it probably sounds a little romantic tho bc they are Good™, #i hope that's okay!, #also my first instinct when i saw this ask was to go 'no YOU have a nice day', #as if this was an either-or situation lmao, #but yes i hope you have a nice day too!!! thank you for requesting!!, #this was the last of the requests for now~, #my inbox is still open tho as usual
21 notes · See All
bowokutoAnswer

link to the fic

link to the song

THANK U FOR YOUR CONTRIBUTION !!!! I WILL ENJOY THIS FIC IMMENSELY

#that song is so good you were right it has big tensemi vibes, #also its so unfortunate abt the trans!osamu fic ive bever read or seen any art of trans osamu :(, #tooth emoji anon, #tensemi, #asks owo
2 notes · See All
90s-belladonnaText

Ushijima, Semi, and Tendou except they’re kinnies and i made fake carrds for them lmao i cant draw rn so this is all i can do 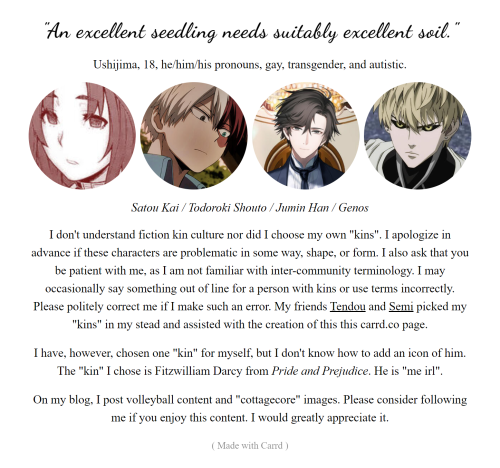 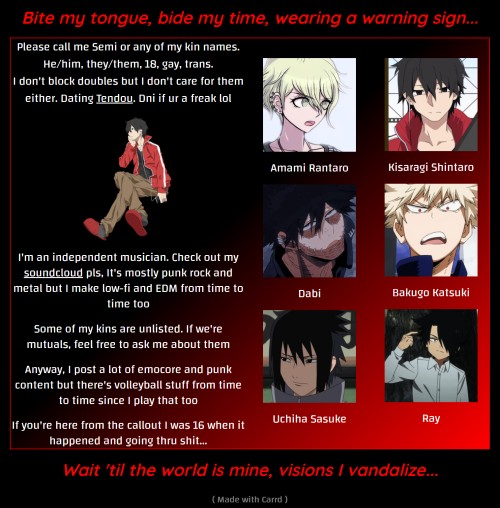 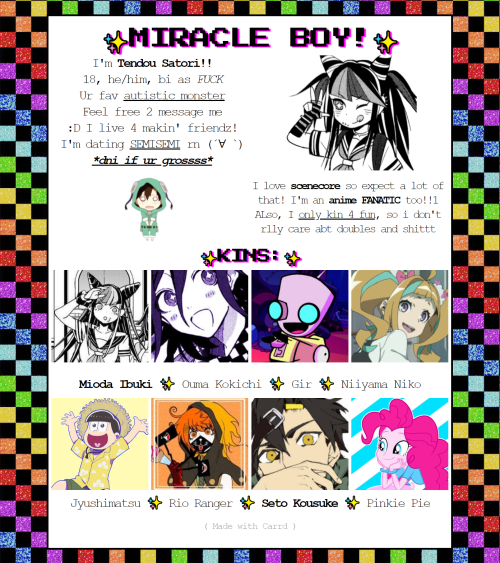 #tendou satori, #semi eita, #ushijima wakatoshi, #tensemi, #ask to tag, #dr, #iz, #tw bnha, #i think thats what i have to tag not sure, #also i gotta say that semis isnt accurate to who he is 100%, #but i dont think he'd portray himself as he actually is yknow
71 notes · See All
nagissimoPhoto 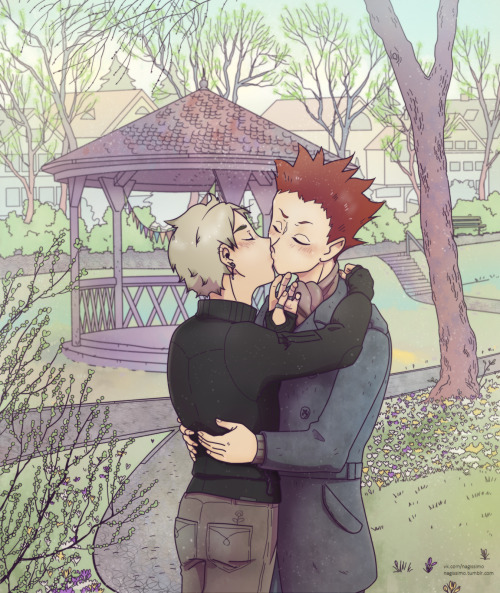 semi, making a face: what kind of tea is this?

tendou: oh, i boiled some gatorade

Summary:  Eita did not expect a lockdown with Tendou. Eita is trying to find space in a situation where Tendou is so close.

Spreading their arms out either side of them, they stare at the ceiling. This is pulling on them in so many ways they didn’t expect; laying here, on Tendou’s floor, in Tendou’s clothes, right down to their underwear because who expects a lockdown to get enforced overnight? They didn’t bring anything much. They should have. They ought to chance going home.

But they can’t, so they don’t. Home is an empty place right now anyway, and here there is food and laughter and music and in between all that is their realisation that they’re not so over this Tendou thing after all.

There’s movement next to them, and then Tendou himself curls up by their side, resting his head on their arm, knee just over theirs.

There’s nothing to it, because it’s Tendou, but Eita can’t get their head around it, can’t get the message to their body.

“Semisemi~” Tendou sings. Part of them wants to curl their arm around Tendou’s back. They stay very still.

“Is there a reason you had to get so close?” They ask, pointedly continuing to stare at the ceiling. They can feel Tendou grin, though.

“Why, do you think I’m infectious?” He teases.
“I’m not Sakusa, you know. If you’re trying to freak me out it’s not working,” they try. They’re not freaked out, just- it’s messing with them in different ways. Freaked out would be a better response.

Read the rest here on AO3!

“Satori! It’s ass-o-clock in the morning! What the fuck do you want?!” Semi’s voice a strangled half-whisper, half-shout.

“I can’t sleep,” bemoaned the middle blocker, stretching out his arms and tangling his legs around Semi’s under the blankets in all the ways Tendou knows he hates.

“So? What the fuck do you want me to do about it?”

“Makeout with me…duh.” Tendou stated, plainly, as if it was obvious.

“That makes you tired; it’s practically excerise, if you think about it.”

“I think your logic is fucked up,” Semi told him before heaving a long, painful sigh. “Fine. Whatever will make you go to sleep and leave me alone.”“Yay!” Tendou cheered and the two of them sat up.

“You better make this good for me,” Semi grumbled, leaning forward to lock their lips together. It started off with just a simple kiss before Semi, ever-skilled, opened his mouth wider, letting Tendou slide his tongue in with ease.

They lazily made out, Tendou’s tongue drawing wet figure-8s inside Semi, little gasps and breathes being let out between them.

“Fuck,” Semi murmured, words lost into Tendou’s mouth. Tendou would’ve grinned if his lips weren’t preoccupied and he reached down, hands snaking under the covers, to grope Semi, starting at the ass then traveling down to the setter’s inner thigh.

Semi tasted like toothpaste and mouthwash and strawberry chapstick. He tasted like Semi Eita and that was Tendou’s favorite flavor, no matter how it came.

The moonlight trickled in from the small dorm room window and danced on the walls in a nostalgic sort of way that Tendou would remember like a hazy-dream of bliss. The nighttime hummed between them as they kissed and kissed and kissed.

“Love you,” Semi told him in between soft, quick kisses that Tendou pressed, repeatedly, onto Semi’s lips.

“I love you too, Eita,” Tendou replied, eyelids starting to feel heavy with the weight of sleep.

“You ready to go to bed yet?” Semi asked through a yawn, pulling away and sliding back down to rest his head on the pillows.

“Yeah,” Tendou said, taking one last look at Semi, ashy blonde hair spread around like a halo. He was a vision of perfection against the bedsheets and Tendou wouldn’t trade the moment for anything in the world.

who knew i could make a makeout scene so sappy? not me. (also me? projecting my love for semi onto tendou? NEVER) thank u for this request, anon, it made me happy

Hey guys! I don’t hang around much over here anymore, but I’ll be posting a new fic soon and thought I’d give a preview. It’s a tensemi prequel to Plumage, but you don’t have to know anything about that one for it to make sense. The first chapter will be out Saturday. This is kind of nsfw, so check under the cut at your own risk.

here y’all go i miss them 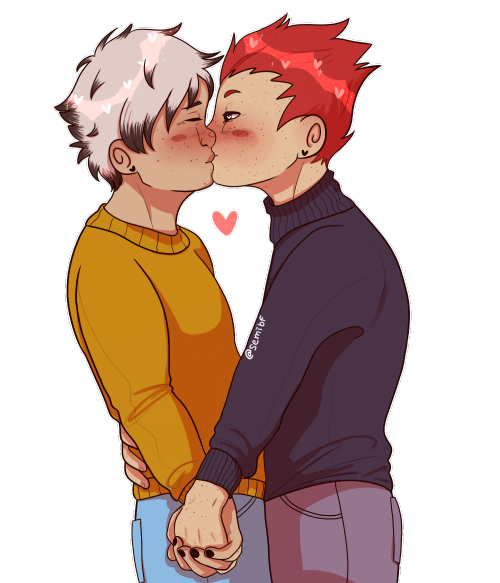 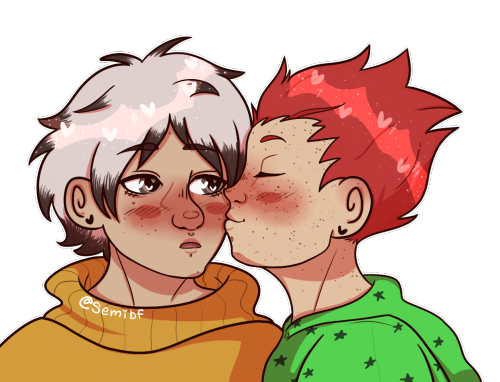 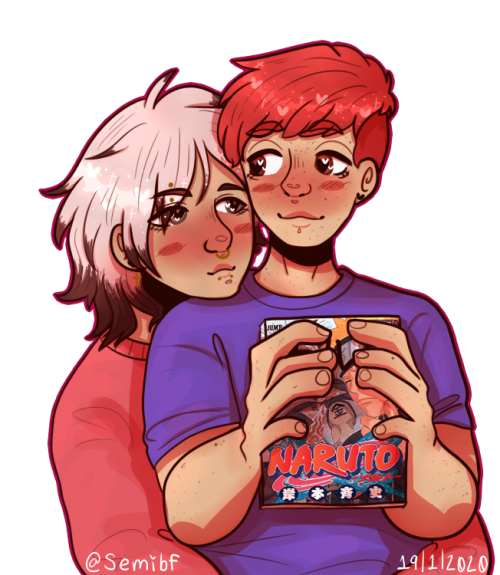 That little grunt of Semi is so cute. It’s like “you’re annoying but also kinda make me blush, too”.