Temari thinks back to the way that Gai talked about Kakashi, the passion in his eyes and the clear adoration he had for his husband. The phrase “Man of Destiny” was still stuck in her head, she wondered if Tenten ever talked about her like that. Tenten, her Woman of Destiny…

‪I literally missed Kiss Day, didn’t I? Anyways, I also miss them too!

tenten… ino…. please strap me down

#i’m dumb and gay, #naruto, #tenten, #yamanaka ino, #i want them to be my lesbian girlfriends
1 notes · See All
pansexualpyromaniacText

Tenten: Why do people like to get the shampoo that insults them the most? Seems kind of uneffective.

Tenten: Hey! Maybe I like getting shampoo for broken, dry, greasy, ugly as shit, fucked up hair! Let me live!

Lmaoo what why i like shikamaru I literally can’t part with any of them tbh but logically as far as who would be less missed I picked hinata and maybe tenten dhdns it only happens they’re both women cause kishimoto wrote them as basically barely noticeable but if not them i think maybe choij ?

Where was that bright smile? His words about not giving up, imitated from their mentor? Gone.

She wasn’t there when it had happened, when Lee was brutally defeated by the Sand ninja. He was so sad now, every trace of hope disappeared from his eyes.

Nobody could do anything. She couldn’t do anything, being too weak to win mere battles before his own.

Anger was all she felt to the red haired boy, even if that was in the past. Even if Lee, with his optimism and bright joy, forgave him. He looked so happy with being his friend, she couldn’t say anything. Just smile at her friend, hug him, watch from behind how he never once looked at her in the same way he looked at Gaara, or Neji, or Kiba. She was glad to be her friend, never telling him anything of this.

#leeten, #egregiousderp, #rock lee, #tenten, #I'm writing them quickly because i don't want to end up with 1k
4 notes · See All
ladylyraPhoto 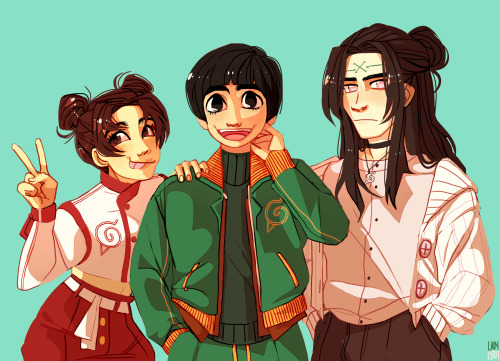 just wanted to draw athletic tenten to cheer myself up.

also the babies have ages there for why not 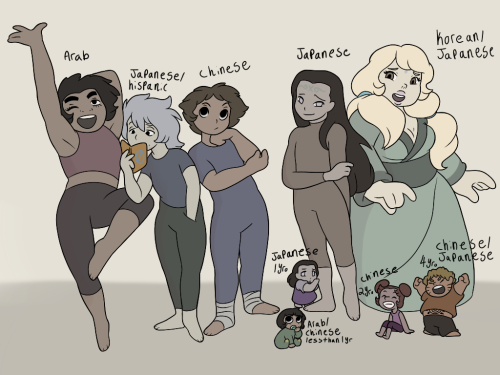 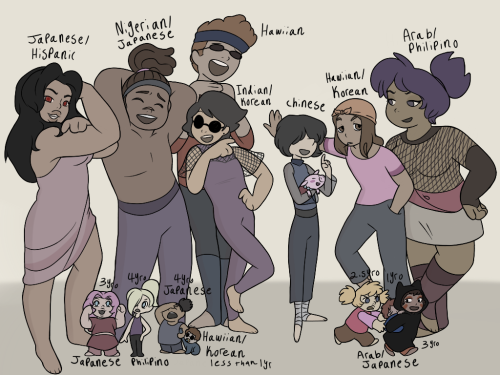 they found tenten after evacuating the village from nine tails

pretty much how their family started 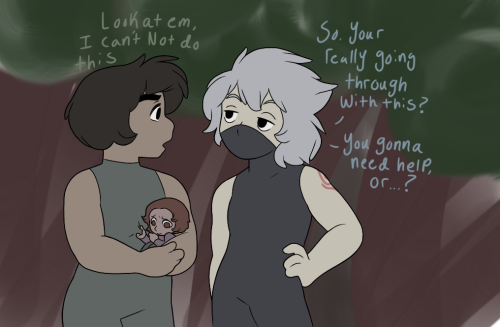 Shino stood on the steps outside the Hokage tower, wearing a black coat and high-collared vest. Kurenai stood in front of him and made his hood lie symmetric over his shoulders.

Yesterday the expected Tanji representatives arrived in the village and insisted on a meeting with the Hokage as soon as possible, with the Aburame included at the table.

“Are you nervous?” Kurenai asked for the third time.

“Are you?” he returned, and Kurenai blinked and retracted her fussing hands from the wide strap on his chest that held the dragonfly jar on his back. She took a step back and clasped her hands together, watching him fondly like Shino imagined a mother would. The string of beads hanging from his shades tapped annoyingly at his cheekbone.

“Remember to be respectful and polite, but speak with authority. You deserve to be in there,” Kurenai said. 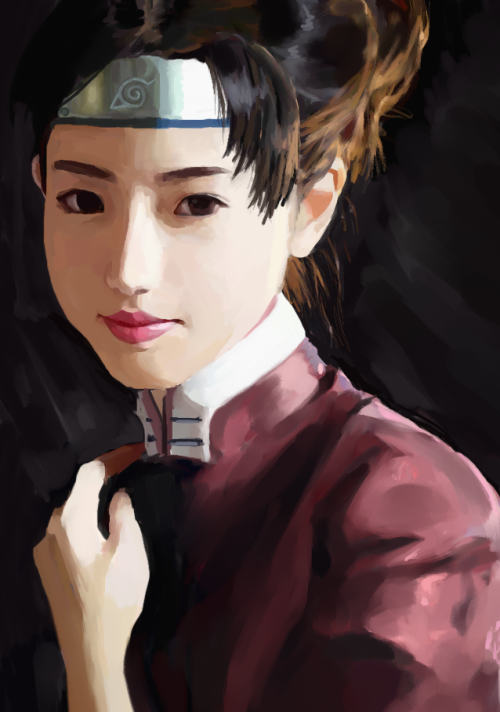 To the ones who draw in Coffee shops, this one is for you.
- X

Tenten stood up to go and claim her drink, smiling gently at the barista. A pretty looking girl about her age, with pink hair and green eyes. She pulled the cold drink off the countertop plucking a paper straw from the stack presented to her. And as she turned to sit back down in her comfy corner by the window, she resisted the urge to take the chocolate shaker from the selection of drink accessories for her already too chocolatey drink.

She enjoyed sitting in the corner that she did, nestled between the window that led to the outdoor world and on the left the rest of the coffee shop. Giving her the best vantage point for the whole room. Sure, it was a little cramped, but it was cosy and the view wasn’t too much of a distraction.

Although her real reason for coming to this coffee shop wasn’t to drink coffee, (well it was but she had to convince herself to endure some productivity for her rewarding coffee.) it was to find someone interesting enough to draw. She couldn’t convince any of her friends to sit still long enough, 15 minutes, to draw them. And she wasn’t going to find any other worthy volunteers, so what better place to do it than at a coffee shop. Drawing strangers, and praying to God they do not notice her as she doesn’t think she can take the embarrassment of having to explain what she was doing staring at a stranger every 3 seconds to draw them.

Nether the less she was hoping to find this experience fruitfull and enjoy some coffee and music. She slid on her headphones relaxing comfortably into her chair as she took out her pencil case and sketching pad. As she spun the pencil between her fingers she looked around to try and find a suitable candidate. ’Too young, too old, too emotionless, too colourful.’

Yes, she was particular but it was her decision, not the subjects. After about 10 minutes of her sitting there twirling her pen and occasionally taking sips of her coffee, she was going to give up and call it a day. Not finding anyone who particularly interested her. And she began to pack her pens and assortment of drawing items backs into her bag when she saw the door swing open out of the corner of her eye and looked up out of pure curiosity.

The person who entered, like the barista, looked about her age. He had long dark hair not quite black but not quite brown, he had cold, pale pearl eyes and was tall and well built. He carried himself with pride and confidence as he strode over to the counter where the pink-haired barista was standing, distracted by something on her phone.

Tenten slowly got her stuff back out placing them on the coffee table, she thought it too early to leave and decided to observe this newcomer. Believing maybe she found who she was looking for. When he walked up to the barista, her attention was still captured by something on her phone so he had to wave his hand in front of her face gently to gain her attention. When she looked up to take his order she smiled pleasantly.

Tenten also slid her headphones off to listen to his voice, trying to crane her neck most inconspicuously to hear him over the lightly playing music and quiet rumble of the other costumers.

“One almond milk iced vanilla latte please.” his voice was light and soothing but his tone deep, it entranced Tenten in a certain way leaving her at ease. As he paid and waited for the arrival of his drink she stared at him from where she was sitting trying to gauge if he was staying or leaving. But her newly arisen thoughts were soon answered as the pink-haired girl handed him his drink and he turned to look for a seat. Concluding that the one diagonally across from Tenten was suitable settling into his seat as got out a book from the bag on his back.

She squinted her eyes slightly to look at the books cover, ’SLAY’, its bright and colourful cover contrasted him completely causing her intrigue to grow.

Tenten grabbed her sketchbook and flipped it open to the next available page, pausing momentarily to grab her pencil and sharpen it before holding both with a keen glint in her eyes. She looked back up at her subject, he was leaning back on his chair with his left leg crossed over his right one. Tilting his head ever so slightly to the right as he held his book in his right hand, unmoving. Shifting his position only to flip the page.

Tenten stared at his frozen form for a minute before sketching his outline and the table that accompanied him. flitting her eyes back and forth between him and page to make sure his figure never left her mind as she drew him. She continued in this state for a few minutes gazing at his unmoving figure as she filled the blank outline. starting by briefly shading in his clothing and surroundings before moving in to draw his exposed skin and finally ending on his face. She left the eyes till last, not knowing how to shade them in without them seeming coloured.

Although before she could answer her question, her eyes flickered up to notice his gaze on her. Staring between the sketch pad in her hands and her eyes. Her face immediately went warm, turning a light shade of crimson. ’Shit I think he noticed.’

He seemed to notice this as he smirked at her embarrassment. Moving to close his book gently laying it down on the table before standing up to walk over and take the seat in front of her. Their eyes connecting the instant he sits down, letting themselves stare deeply at each other for a couple of seconds.

“Can I see it?” he asks her, motioning with his forehead towards the book she is gripping, pressing against her chest.

Tenten looked down self-consciously before holding out the book to him, which he took in reply, holding it an angle that only he could observe. Analysing with those pale eyes of his.

After a while, he looked back up at her. Her eyes searching his for some sort of answer. ’Does he like it?’

“Why did you leave out the eyes?” is what he chose to start their conversation off with, scanning her face, forcing an answer out of her.

“because I couldn’t decide whether shading them in would make them seem colourfull or not.” nervousness had overcome her, causing her voice to be quieter and softer than usual.

“what do you mean by that?” a perplexed expression came across his face, lifting his eyebrow as he tilted his head slightly.

“I understand. Well anyway, I like it like that, if you’ll allow me to make a suggestion I think you should keep it like that.” The corners of his mouth lifted the smile leaving his face as quickly as it came.

“Sure, if you think so.” She replies trusting his opinion. Trusting him.