why did they have to ruin everything they’ve build until then with season 8?

#castle, #textpost, #me, #ignore me, #just needed to get my feelings out, #acutally my frustration, #still as mad about this final season as about dereks death
3 notes · See All
bottleddaydreamText

I passed out for the first time in like, 5 years last night and my rollator fell on top of me and hit my back and head. I’ve had a lot of times where I lost vision but this time I actually lost consciousness and it’s made me a little nervous. I really thought I had my POTS under control? Also, really thought my walker was supposed to help me not hurt me!

So I know I looked like I was being silent on this platform throughout most of the protests that were happening this week, and that I was neither spreading and contributing information on protests, nor more positive things to help alleviate the pressures arising from said conflicts, which is true. But I didn’t wish to do as such, because for the past week, I could neither post, nor reblog, nor change anything about my blog, due to a technical issue I couldn’t figure out (I suspect it may have been something with the browser?). This problem only alleviated today. I will be making up for my silence on all accounts by reblogging the information and links that I would’ve liked to have done earlier, as well as more recent information, as well as posting my own art and reblogging art and more humorous things - because times hard, art and jokes soft, and I can both try to support a fight for human rights and also provide content for those who need a mental break from all the terrible things in this world. Happy Pride, and black lives matter.

if i ever decide to come out to my family it would be by buying a shirt that says “gays? in your family? it’s more likely than you think” and wearing it as often as possible until someone asks me about it and i would just wink as an answer

#lgbt+, #gay, #coming out, #can i tag this as pride month, #textpost, #gay shitpost, #bold thing of me to say bc i made a post how idk what my sexuality is like... a day? two? ago, #but yeah i would like to say that i am not a heterosexual, #definitely not that
1 notes · See All
himbo-buckleyText

Alright guys, so this has been in my mind for a while now and while I am unsure if it even matters to talk about it now because he might not even be in Season 4, I don’t think I’ll get this out of my brain, so here! Have a rant:

alternative title: Catharsis hypothesis and anger as a secondary emotion

Which, if any of you had some psychology already says everything but for those who didn’t; here is what I mean by that:

First off: the catharsis hypothesis

I’m not gonna link any background info on this but basically what it comes down to is the assumption that through sport we can express emotions such as anger and get rid of them, especially through violent sports such as boxing OR MMA. They can be used to purge our pent up emotions

Anyways, the other thing connected to this is the idea that anger is only a secondary emotion, as some psychological schools teach. It basically means anytime we are angry there is another underlying emotion at work - like you are sad but you don’t know how to express your sadness so you turn angry instead because you know how to express that (and this is why it’s most often a problem in boys because we do not teach them how to handle their emotions because boys aren’t allowed to cry so they become violent and angry instead)

And to connect the dots back to Eddie:

And I think that’s all I wanted to say?

EDDIE DIAZ IS NOT A VIOLENT ASSHOLE HE JUST HASN’T LEARNED TO DEAL WITH HIS EMOTIONS IN A HEALTHY WAY AND THAT BOY LOST TWO PEOPLE HE LOVED IN A VERY SHORT AMOUNT OF TIME AND COULDN’T LET HIMSELF GRIEVE BECAUSE HE THOUGHT HE NEEDED TO BE STRONG FOR HIS SON AND HE KEPT NEARLY LOSING BUCK AND THEN THE TSUNAMI HAPPENED AND THE LAWSUIT SO HE SORT OF ACTUALLY LOST BUCK AND HE NEARLY LOST HIS SON AND IDK ABOUT YOU GUYS BUT TO ME THAT SEEMS LIKE A LOT IN LIKE HALF A YEAR SO MAYBE CUT THE GUY SOME SLACK???

#eddie diaz, #eddie meta, #eddie diaz is not a violent asshole, #911 meta, #911, #911 fox, #textpost, #mine, #meta, #is this meta or just a rant with some poorly explained psychological ideas?, #lol
14 notes · See All
stopdropandsiptheteasisChat
Genie: You get three wishes.
Me: Ok, I would like to be able to think of a character trait and then see which people around me it applied to by them lighting up.
Me, thinking: So who here has googled "am I gay quiz"?
Me: Ah, I see...
#funny, #genie, #me, #three wishes, #chat, #textpost, #humor
0 notes · See All
moodypoemsText

Night time for me

Day time for you

Across the world we play

On a made up stage

We’re having fun together

You and me, we’re meant to be

My smile, your laughter

Inside jokes and memes

We’ll always have each other

We’ll always be “right there”

Night time for you

zuko: i marry them

Sleze: how would you know?

Demion: *literally holding his own head* oh i dont know, I died in my sleep- I GOT FUCKING DECAPITATED HOW DO YOU THINK I KNOW??

back on my old bullshit

#i want a, #interne friend, #fucking AGAIN, #i thought i was over that :/, #textpost
0 notes · See All
weabooooText

kinoshita; imagine if someone handed you a box full of all the items you have lost through out your life

ennoshita; it would be nice to get my sense of purpose back

suga; oh wow my childhood innocence! thank you for finding this

tsukki; my will to live! i havent seen this in 10 years!

daichi; i knew i lost that potential somewhere

currently, life is zuko and I am the turtleduck

Peggy Carter: *grabs whoever she’s kissing by the face, arms, or collar*

Natasha Romanoff: *grabs whoever she’s kissing by the face or neck*

Gamora: *gently pulls whoever she’s kissing closer by the collar*

Sharon: *wraps her arms delicately around the shoulders of whoever she’s kissing*

Dottie Underwood: *grabs whoever she’s kissing by the arms and pulls them in*

my 2nd day of jesys bday challenge is gone :( and it wasnt flagged??? im so confused

god is real and his name is kim jongin 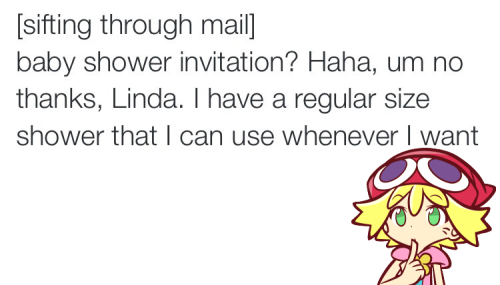 kuroo, looking at his report card: yay! i have an a in chemistry! kenma, what do you have?

You don’t hate me. You really just want me all to yourself. When I find you I’ll pull you close & gift you the kiss of death.