Day 2: TFA (Elita can be in her Blackarachnia form)

Day 4: G1, but Optimus and Elita as Orion and Ariel

Day 5: Shattered Glass (It’s an AU where autobots are evil and decepticons are good)

Day 6: Genderbend (Can be one of them being genderbend or both)

Hello everyone today we have another song, todays helpers are both the Autobots and decepticons

I throw the grenade up into the air as I wait for Magnus to leave for patrol, after a couple kilicks before seeing Ultra Magnus coming into the room before transforming as leaving, smirking I leave to put my plans into action, walking into my room I pull out my datapad, I turn it on and type on the pad 1, 2, 3, 4. Then make sure it can’t be traced, I then send the message to the mad scientists himself, Shockwave.

As I work away on more predacons, I hear a beep coming from my datapad, picking it up from the side table, I take it out of sleep mode to see the message.

Delivered or not, I just don’t give a damn

Pretty sure I’ve always been this way

I think to myself, must be that wrecker, shouldn’t have given him my datapad address.

I should probably delete it, it’s all illogical.

This fragging synthetic energon is giving me a helmache make this scrap flow from my processor, I want to get this right but it’s annoying.

Time’s moving on, but the clock reads the same

I’d prefer it that this not get around

Folks don’t like to hear that the world is upside-down, what does that even mean, well whatever.

As I walk down one of the halls in the nemesis, I see a group of vehicons talk about me, saying how I am actually one of them, or saying I deleted all my emotions, or I am their nightmare fuel.

Or plane out say, I literally do nothing else other than the work.

Or that’s what they try to tell me anyway

Deep deep down inside, I know it’s true.

Optimus Prime and Megatron for this part.

Heey hey, could you maybs play it again?

Tell me, tell me, what should i do? Stop the war or keep going, primus help, and that that weird feeling that I have

This feeling’s kinda pulled one over me, it’s infuriating

Loud and clearly, I hear you.

Freud? Keloid? Strike the piano with my fusion cannon

Soon you’ll laugh at e-ve-ry-thing, especially after the war has ended

Dancing faster on the battlefield like an idiot with each other.

“C'mon guys let’s clap our hands” I say to Jack, Raf and Bulkhead.

Clap-clap-clapping our childish hands, Try to keep a beat we don’t understand And I can’t be asked to give a rat’s A, Weather’s getting colder, colder every day" I say clapping my hands and smiling like an idiot.

Knock out and Breakdown now.

italic for Knock out, Breakdown bold, underline for both to together.

How’s about if you and I could rendezvous? I need a break from the spaceship

Rendezvous? What do you mean by it?

it means wanna meet up, so wanna rendezvous?

sure but what will we do?

Maybe we go on Adventure, like you know explore more of this mud ball, backwater planet, to have some fun too?

Stepping out a crooked path like one, two, one, two.

Ah, I’m so pissed at Megatron, that, that, that walking scrapheap is going to run us into the ground

Using both my servos to keep it all inside

I’m gonna blow it and scream

Empty out my processor.

The king himself Predaking and the other two predacons, Skylyax and darksteel

Predaking? Darksteel? Just pinch me, would you?

I can’t seem to steady myself, I think my pedes have a glitch

I think maybe we do something else, interested, it looks sketchy

Miko? Wheeljack? Play it again, then

“wait” you tell me “Just a micro-kilick! Don’t, don’t you me separate from you!”

Just give me a sec, Imma going to get Sky-Byte from RID-01, also get Rodimus prime for IDW.

Underline for the prime and italic for the shark, bold together.

How’s we if you know, you and I could rendezvous, never met a blue shark before

Rendezvous? No thank you, I have poetry to write

Maybe we could I don’t know go on an adventure, so wanna come too?

Drinking heavily high-grade, sighing out of key, everydat, you see

I’m one crazy Matryoshka! Wanna be one too?

Umm no thank you, I think you should see a therapist

It is the bee himself, Bumblebee from prime

Hey hey hey, could you maybe play it again?

Tell me, tell me, what should I do?

This feeling’s kinda pulled one over me

Wow this took a bit, anyways next will be Echo or anime opening song.

Working on redesigning my tfoc

I think it would have been much more interesting to have him join the Autobots at the peak of his discontentment with the Decepticons. Starscream could have immediately told the Autobots the location of energon mines to raid, since around that time they were also deficient. Having a flier would be a great asset to them, but the complications of trying to accept a Decepticon, especially Starscream, is all too juicy. But then imagine Megatron’s outrage! Starscream as an Autobot instead of a rogue would drive Megatron to have him hunted down and killed. So Starscream could be at such a risk on the battlefield that it might even paralyze him from going out if he thought Megatron could be there!

Now then imagine what could happen if Megatron DID catch him. Yesh, sounds like a good fanfiction idea. Though there could be some great scenes where Starscream proved his worth to the Autobots, giving them epic plans or swooping in and saving someone. But honestly, I do like how Starscream stayed a Decepticon and got so manipulated by Megatron in TFP. It’s just that I wanted Starscream to develop and interact with the Autobots more, get some understanding from others.

My updated Laserbeak design. Their alt mode is a shield. 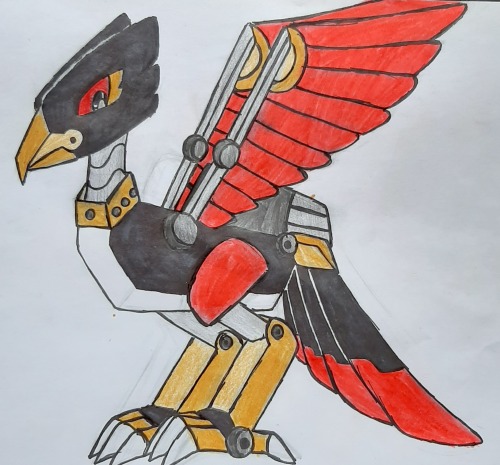 This whole pandemic situation is really sucky and I hope you all are doing well.

•The pandemic doesn’t really affect the bots, the kids come to the base all the same because Optimus thinks the decepticons are a greater threat

•Arcee, Bulk and Bee help their charges with their school work, since it’s all online and they can now do it at the base

•Jack is probably safest at the base, his mom being a nurse and all, so he doesn’t get sick

•None of the bots would take the risk of blowing their cover by just walking around, but they do drive around more freely, Bee especially drives really fast because there are very little people around

•The bots go on missions as usual and do their patrols

You didn’t specify the continuity so I hope you don’t mind me trying something new!

#this ask is probably 2054 years old i am so sorry, #tfp, #transformers, #starscream, #tfp starscream, #maccadam, #i didn't like how this turned out so i hope its not a total disapoint especaly after all this time, #my art
143 notes · See All
knnw-aPhoto 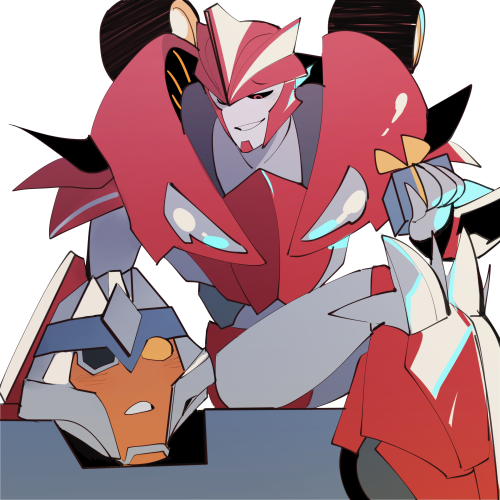 Knockout doesn’t like when someone takes his tools. There is a dirty version of this I will post but I’ll make sure to ‘hide’ it. 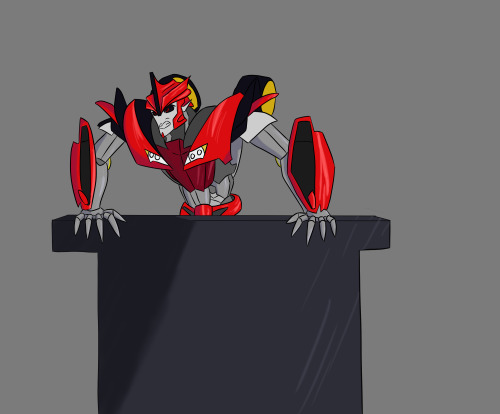 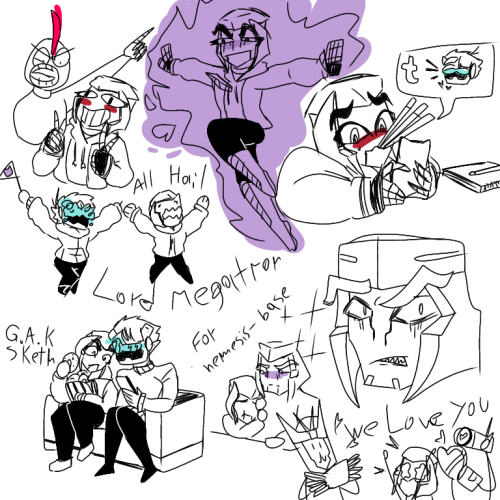 Saw a lot of Knock Out on my dashboard. So i did a quick drawing. 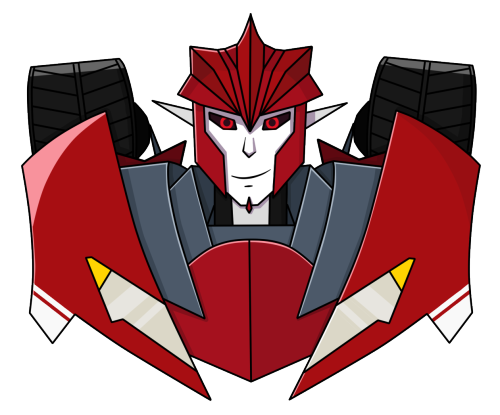 Orion: But what if I’m not Megatron’s type.

A warm up sketch that somehow turned into a G1 screenshot redraw, might have to do some more 🤔

I was thinking and do you ever realize how much of a rock Knockout is for Starscream?

Knockouts the constant in the many variables on the Nemesis, Starscream isn’t worried about how KO will treat him the next day or if he’s wronged him somehow. He has a pattern or a system if you will with Knockout, He vents, KO banters, he banters it’s something Starscream knows will happen everytime.

As far I can remember Starscream is comfortable around Knockout, something he’s not around practically everyone else on the Nemesis. Like even if he doesn’t realize it the medbay is his safespace, it’s where he’s with someone he doesn’t have to worry about and can talk to without fear.

These two are both shitty in their own ways to oneanother but on the Nemesis it’s the best fucking support system Starscream could possibly get. Plus if he ever had to defend himself against KO for whatever reason he feels confident in his ability to do so unlike with Megatron, Soundwave or Shockwave who have the means to do something if they’re angry with him.

#i was having thoughts also i talked with kegan & he said go for it sooo, #starscream, #tfp, #transformers, #maccadam, #ashe.txt
24 notes · See All
Next Page