Behind the Lens || Derrick Johnson

Oscar Grant III, Trayvon Martin, Sandra Bland, Philando Castile, Eric Garner, Mike Brown, Rekia Boyd, Sean Bell, Tamir Rice, Freddie Gray, Danroy Henry, Terence Crutcher, and Aiyana Jones all have something in common. They were being black in America. In American society, anti-blackness is not the exclusive division of white Americans. The anti-blackness is so deep in the fabric of the United States of America’s history that no community is immune from it. August 28th, a day that most people disregard and think it’s a normal workday, school day, or regular day. The first thing that comes to mind for me is that this day should be marked as a day of memoriam for Emmett Till. In grade school usually during February, (also deemed as Black History Month) as students, we are taught only to celebrate positive black role models like; Martin Luther King Jr, Rosa Parks, Malcolm X, etc. However, when being taught this curriculum it never focuses on America’s flaws such as slavery, and the radical and prejudice practices that occurred.

Being an African American woman I was taught from a young age that there is a system of societal norms and behavior that are justified as acceptable even though it is discriminate against not only me and my race but also, against anyone else whose appearance does not reflect European white beauty standards. According to the New York Times, Professor Angela Onwuachi-Willig a professor at the University of Iowa College of Law states that  “Race is not biological. It is a social construct. There is no gene or cluster of genes common to all blacks or all whites. Were race “real” in the genetic sense, racial classifications for individuals would remain constant across boundaries.”
In today’s society white privilege is often described through the lens of Peggy McIntosh’s revolutionary piece “White Privilege: Unpacking the Invisible Knapsack.” McIntosh exposes to readers of how white people’s skin is a privilege due to there being a transparent preference for whiteness that absorbs our society. Having white skin gives them privileges that contributes to several roles in our society. First, it gives white people amenities that people of color cannot earn. Second, it allows them to possess real advantages for them. Reflecting back, it is evident that white people are not liable to a lot of challenges that people of color are exposed to and have to endure.

Currently, there is an advertisement created by Procter and Gamble called, “The Talk”. This advertisement exposes the true depths of what people of color, but mainly what African Americans have to endure every day. It shows a variety of scenarios that present on the variety of particular challenges faced by African-Americans. It reveals the struggles African Americans may have thought were left in the past, but sadly still remain a pitiful reality today. Numerous scenes portray how mothers balance their fears with hope as they try to nurture their children and discuss the racial encounters they will have endured, and how their lack of privilege is used against them. From the beginning, one mother assures her daughter that she will be fine while she is away at science camp. The only contradicting part was that she would have to “work twice as hard and be twice as smart,”. Another mother with a “pretty” daughter is combing her hair while they are at home, the daughter says that a woman called her “pretty for a black girl” as if her beauty was not acceptable to conventional beauty standards. The mother clarifies to the daughter that she’s “beautiful, period.” Yet, there are other concerning scenarios as well, things that are beyond their control over. Also in the video, one mother insists that her son brings his ID with him to music practice, because it will be late when he returns home. Another concerning scenario was a young lady at the steering wheel and she is telling her mother that she does not need to worry because she’s a “good driver,” but that’s not what her mother’s real concern is. The mother implies, “It’s not about you being a good drive it’s about you coming home.” This advertisement does not sugarcoat with assurances that things will only get better but, creates a need for awareness that these scenarios are apart of the African American experience. This conversation is becoming more prominent in black homes due to today’s political and social climate.

Currently, it has been seven years since Trayvon Martin’s death but it sparked back up the controversial conversation that needs be had between “race” and “white privilege”. I remember that immediately after the murder of Trayvon Martin, people of every race took to the Internet to proclaim “I am Trayvon Martin.” They created clothing that only showed an Arizona can and a bag of Skittles, supporters proclaimed solidarity. That was a well-meaning and earnest attempt to express their empathy, but it also veiled the core issue, which is that Martin’s death was not because he was wearing a black hoodie past 10 o’clock at night, but because he was wearing a hoodie while being black. His killer George Zimmerman abused his white privilege to the utmost, from selling the gun that he used to kill Trayvon with for over $250,000, to try to plead his case by victimizing himself Zimmerman is and the jury that allowed Trayvon’s death to be in vain are solely responsible for the death of a child. Zimmerman exercised his privilege to ignore the messy reality that he caused a person’s death in order to promote his own narrative of victimhood.

In closing, as a black woman who is socially conscience about the white American experience. There will always be ignorance and prejudice in the world, but there are also people in pain, suffering, and struggling. I am grateful to be able to notice and face racism and discrimination head first, it allows me to educate others who are not aware of their privilege based on race, sex, ethnicity, etc. They have helped me to understand my personal experience and, just as importantly, to see beyond it. 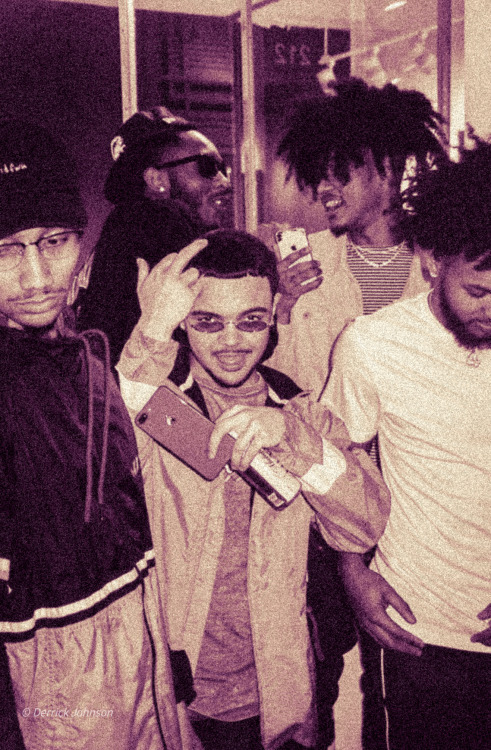 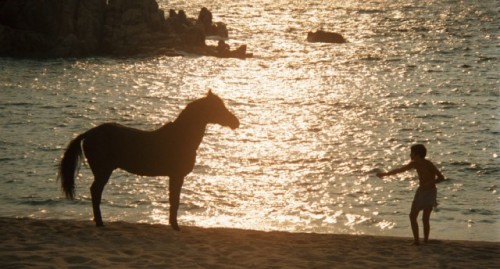 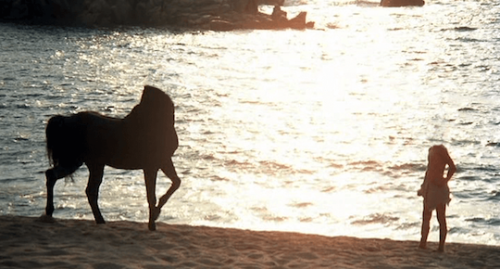 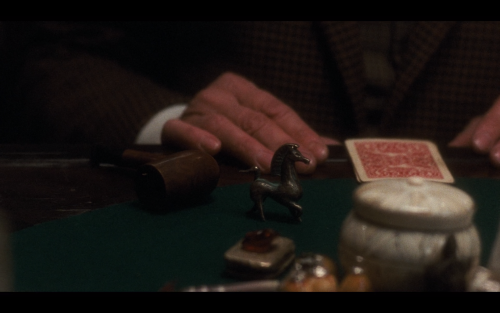 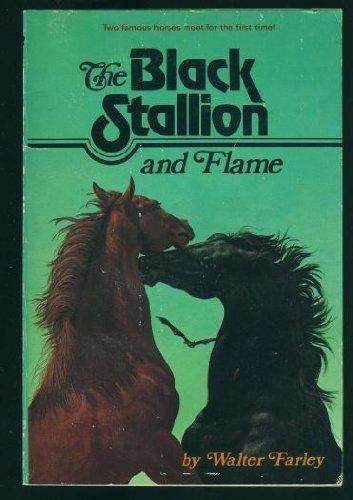 Trivia: This Arabian racehorse stallion was hand picked by Walter Farley to play The Black in The Black Stallion movie, but his owners turned down every offer given, and thus Cass Ole became the main horse of the film. The movie studio then bought out the entire 40 owner syndicate, and El Mokhtar and Cass Ole shared roles in The Black Stallion Returns. El Mokhtar was used in a lot of close ups and during the epic final race of the film. He was trained to “court” the grey mare Johar (who was actually a gelding named Talishma!) in the final scenes of the movie, but sadly he suffered a fatal bout of colic just before the scenes were filmed. 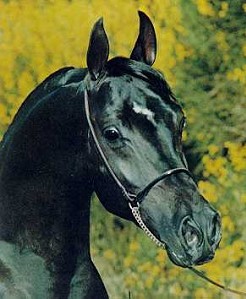 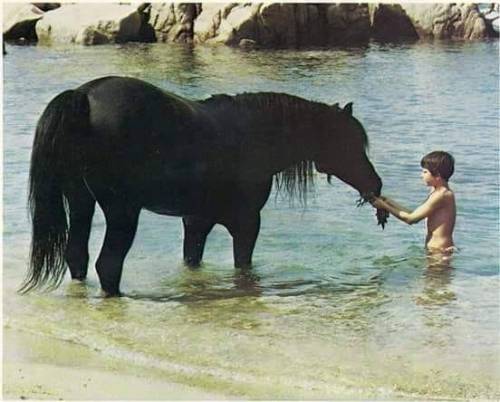 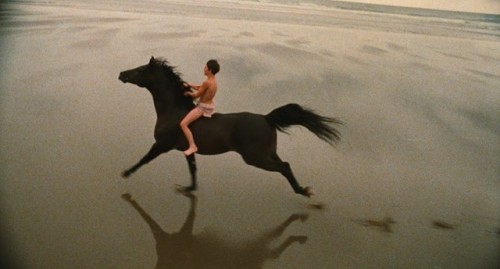 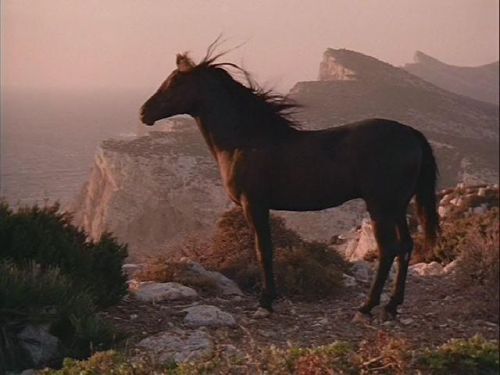 “I never really thought about why/how the Black was able to race successfully against Thoroughbreds, thats interesting. I just assumed he was a superfast Arabian.”

I never really thought about it, either. It’s the Black, o’course!

I’m trying to remember when the Jockey Club closed its studbook. I think that, theoretically, at the time when Walter Farley was writing his books (The Black Stallion, the first in the series, was published in 1941), the Black could have been registered with the Jockey Club, but I don’t know enough about racing TB history in the United States to make any sort of definitive statement on that.

Anyone else wanna chime in and help clarify this point?

“The Black Stallion” by John Stanley, illustrated by Gerald McCann 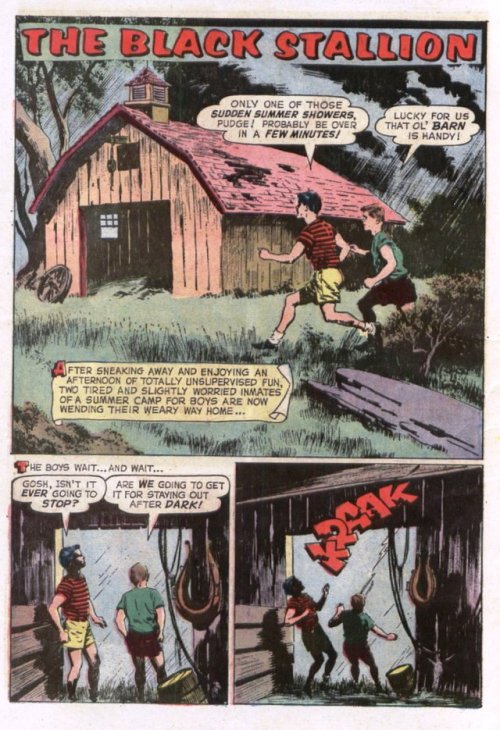 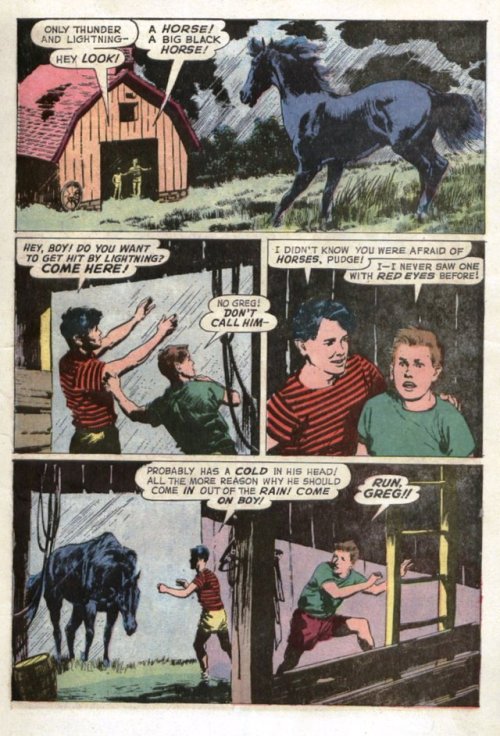 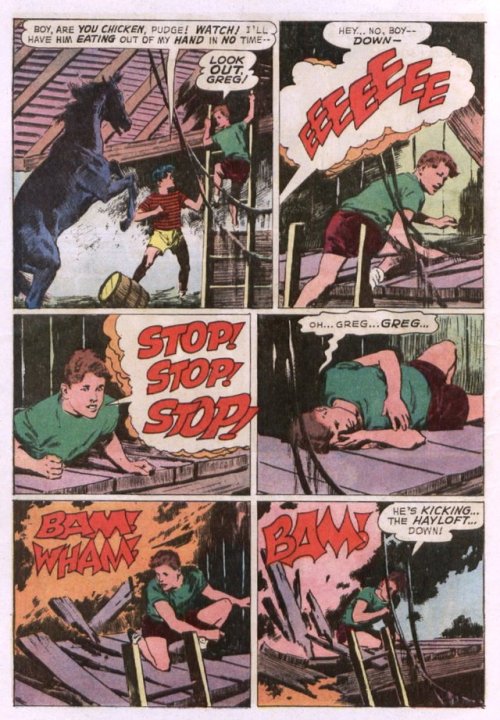 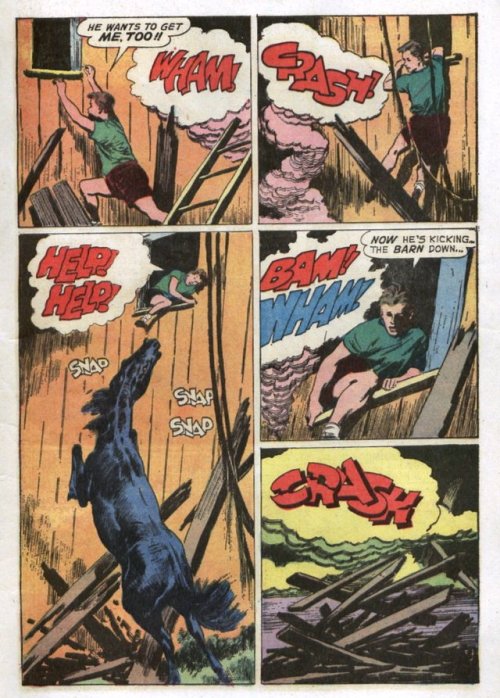 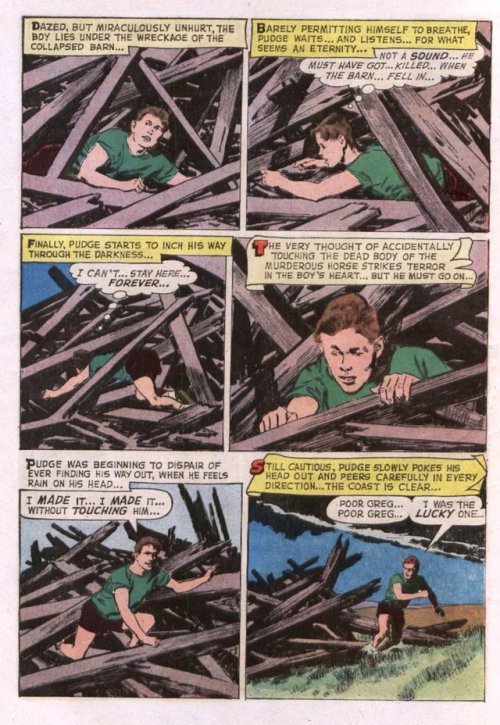 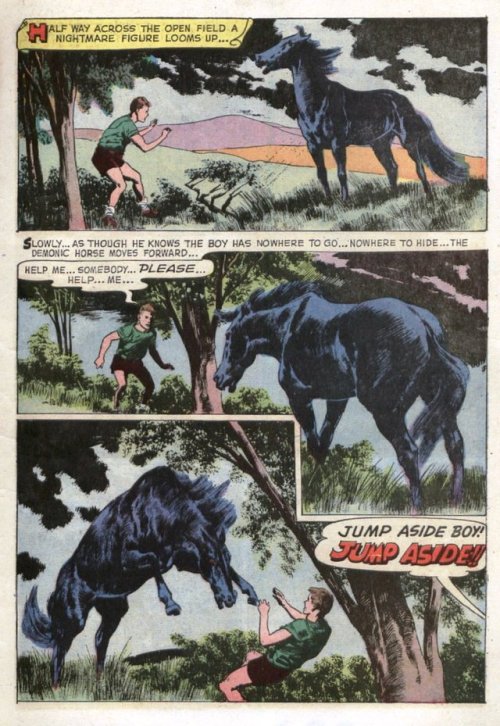 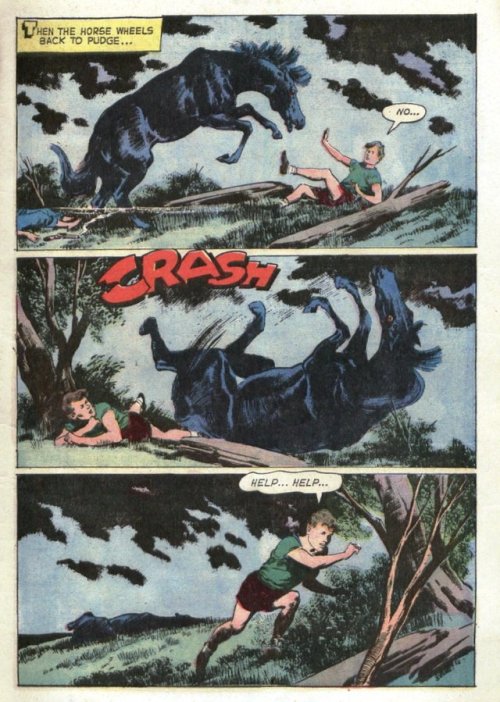 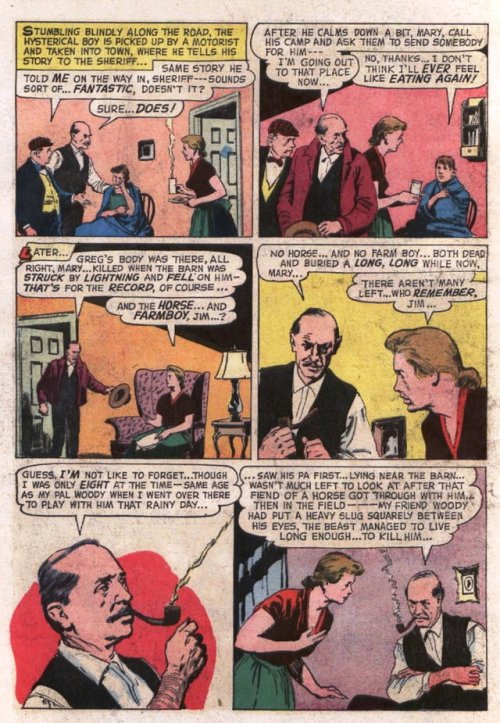 The Black Stallion Aesthetic
This is my favorite book and has been since I was little. I highly recommend no matter how old you are. 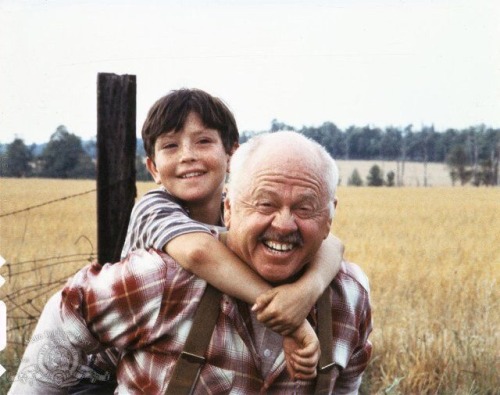 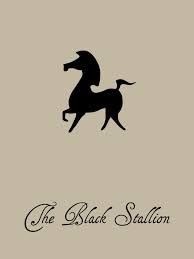 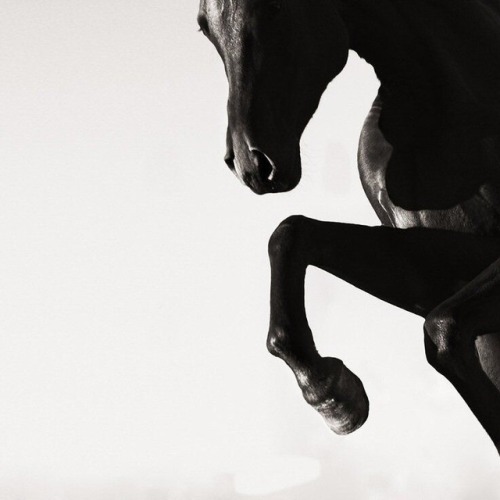 This is, of course, quite interesting in that the interview was published in January of 1981, also right before the big Arabian horse market crash. In a way, he was right - the same thing happened with the American Shetland ponies in the 50s. I have to disagree with Mr. Farley that it’s the romance of the breed that ought to be marketed - I’ve grown to not overly care for the so-called “Arabian Mystique” but instead adore the breed as a remarkable trove of athleticism, personability, and history – when bred right. So many breeders of the main halter ring can shove it: we need to breed for performance as a first priority!

Observing the Elements with Caleb Deschanel: THE BLACK STALLION by Kimberly Lindbergs

In THE BLACK STALLION (’79), an 11-year-old boy (the wonderful Kelly Reno, who performs all of his own stunts) befriends a wild black stallion after he and the horse are both shipwrecked on a remote island. When the boy is finally rescued, the stallion returns home with him and the two become inseparable companions before entering the high stakes world of professional horse racing. This children’s classic contains very little dialogue and as a result, cinematographer Caleb Deschanel becomes the storyteller. His camera boldly employs the four elements (FIRE, WATER, AIR and EARTH) to tell this timeless tale, which allows viewers to experience a child’s sense of awe and wonderment in his natural surroundings. I hope the following images will illustrate why THE BLACK STALLION earned Deschanel numerous award nominations for his cinematography. 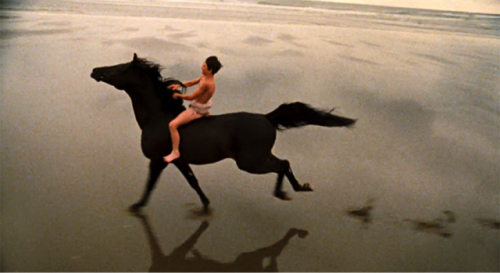 I love that The Black Stallion was written because Walter Farley was fed up with the fake talking horse nonsense and wanted a real horse story - his very own lament on that’s not how the force works.

Can you imagine, if The Black Stallion had been portrayed by another breed? A thoroughbred? Or - god forbid - a Friesian? What is a timeless childhood classic could easily have been one of many in a long string of horse movies chucked into the ‘monstrosity’ bin! Thank goodness Walter Farley genuinely loved Arabian horses and was willing to put his foot down on the matter! 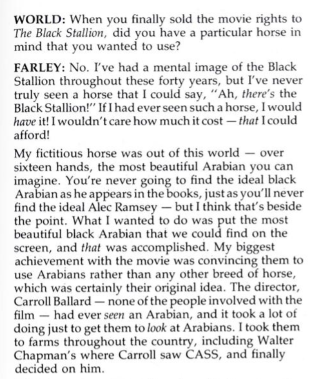 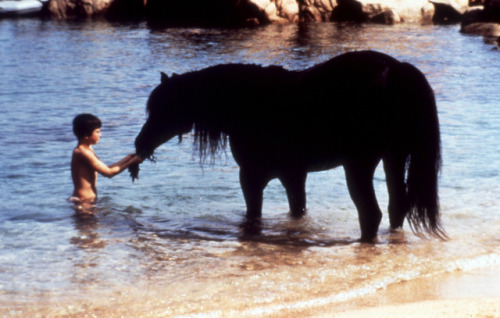 #The Black Stallion
1 notes · See All
Next Page