glint and crow society this is for u 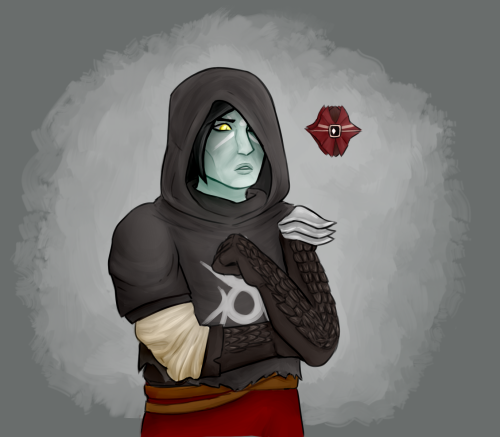 My hunter is a special girl and shares the one braincell her ghost Tink, Crow, and Glint collectively own.

after last year’s dawning lore I’m gonna be really salty if we can’t bring CROW some cookies so he can experience the dawning at least a little bit the way it was meant to be, since he can’t come to the city ;( 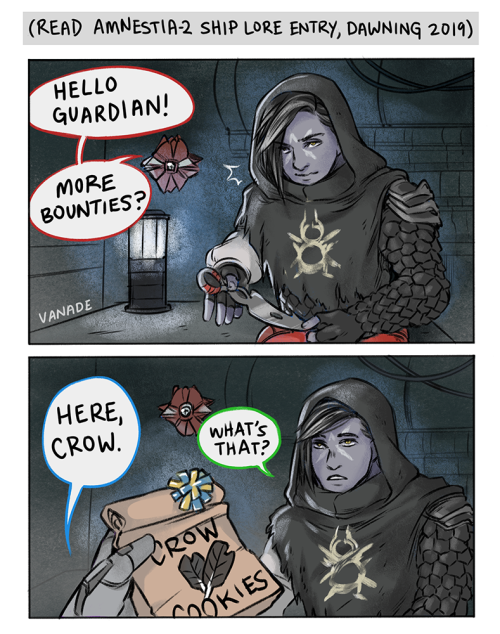 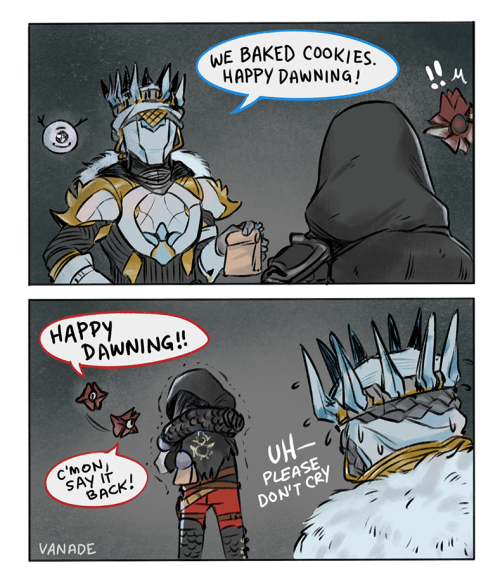 a story where the Guardian takes the Crow under her wing

There are two things a Guardian must do in their life - face another’s past as your own and experience fateful irony so cruel, it hurts.

Cherish would have preferred those two things occurred with at least a century in-between. Instead, it is a week after learning to wield stasis that she meets someone so familiar eye to eye.

She looks at him, the Crow as he names himself, with that sword in his hand and torn cloak on his shoulders. His eyes glow from under the hood and most importantly, a Ghost floats beside his head like a cursed halo.

But Glint is friendly and Crow is harmless. And if there is anything Cherish learnt, it is to trust her guts.

So she trusts him.

First meetings are awkward beyond measure. Awareness that the Spider surely listens from every corner of this crammed domed room is crushing. Meeting Crow’s eyes takes a while, not only because Cherish remembers them from across a hand cannon’s point of view, but because Crow is so shy and reserved. She gives him time to open up, and when he does, it is with the first smile given.

They start going on hunts together, properly. Crow’s light is still untested and raw, sparkling with energy at his fingertips.

“I can’t decide between two things,” the Ghost says once and Cherish looks up at him, confused. “It is either you’ve adopted him or you like him.”

Cherish waves her hand dismissively. “It could be both. He needs a guiding hand, and hopefully I can guide him away from the Spider by that very hand.”

“You are not going to let the Spider detonate Glint, are you?”

“Do you really think I would?” Cherish asks, incredulous, and Ghost flexes his shell.

“Of course I don’t think that. But you know how much I worry.”

Cherish watches Crow as he gleefully dances with an arc staff or throws burning knives, ricocheting them off rock walls of the Tangled Shore. It is, perhaps, the most vivid example of the Traveler’s benevolent blessing, where a man was reborn to love light and life so passionately, it bursts from him with plenty.

While not as skillful with light, Crow is certainly a master with weaponry. He favours snipers most of all, but holds a shotgun on his person too. Glint has to remind him of a sword that shines on his back, and the Crow switches to it in the heat of battle.

Cherish can’t help but wonder what it looks like when two hunters dance with swords against an enemy. In her eye, it is beautiful.

One day they sit on a rocky slope, overlooking the purple mists of the Shore. It is a quiet spot, tucked away from the hive, the eliksni and even the ever present scorn. Cherish plays with a tiny shard of ice that cracks and breaks, then reappears above her palm.

“I know as an Awoken I am born from Light and Dark. But the Darkness scares me,” Crow says softly. Glint sits on his shoulder, leaning into his neck, as if a bird asleep.

“It scares me, too,” Cherish admits. She never told anyone.

“I admire it that you can wield it. I think for now I want to learn how to wield the Light just as strongly.”

Cherish hides a smile in the folds of her cloak. In quiet, they sit and ponder each other’s lives and words.

“I also know that I was born from Light and Dark, but I can’t help but wonder, who was I born as. How old am I? Does anyone remember me? Have you ever found out about your past?”

Cherish looks at him quietly, shaking her head.

Glint perks up, his shell slowly rotating around the lively burst of light. He has no eyes, but Cherish feels his stare.

Maybe it’s not the right time, but…

Oh, Glint, how right you were… 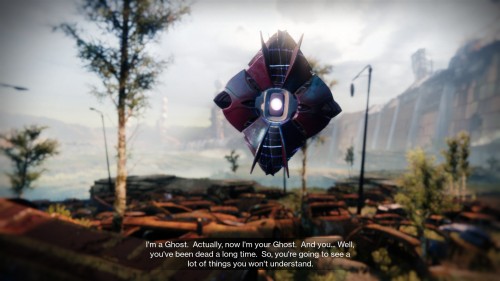 He is just a little creature.

He cannot help this.

What if we were all bad people before we became Guardians, and the Traveller is giving us all a second chance?

#destiny 2, #destiny, #bungie, #traveler, #traveller, #guardians, #destiny 2 beyond light, #the crow, #I got to thinking after reading some of his lore from this season, #warlock, #faeratil samuels, #faerie, #faeratil
175 notes · See All
fireteam-of-idiotsText

#destiny 2, #destiny, #the crow, #this is what happens when i stay up past 2 am
160 notes · See All
a-driftamongopenstarsText

Glint: I’m afraid spider’s getting impatient. I was hoping his gratitude will earn us more leeway.

Crow: He’ll never let us go willingly. If we want to be rid of him, we’ll have to do it ourselves.

Glint: Just remember, that it’s my life and your light on the line…

After much thinking I have realized that do, I’m fact, have something with smart characters executing their vendettas.

When I was 10 —yes, 10— I read Wuthering Heights and I had an INSANELY HUGE crush on Heathcliff. The only thing that bothered me was what he did to Hareton, poor kid what was his crime? But as for Edgar, Isabella and Hindley, they were all mean to him in different ways and above all they humiliated him. Sure he wasn’t a little angel at all, but they way they all made fun of him deserves all the suffering they got.

As for Cathy and Linton, they did nothing to him but their spoiled superior behaviors got them exactly what they deserved. How they both humiliated Hareton and thought they were better than him is so ugh. They deserved a little more than what they got. Tho I think Cathy atoned herself enough.

Then when I was like 15 or 16 I read Count of Montecristo and what do I even say. That is tooooo long to make a detailed argument but the essence is the same. The it thing I didn’t like was Edmund forgiving Mercedes. Bitch deserved everything that could happen to her.

The idea of a crow who brings back those who can’t rest without avenging themselves and the people they loved?? It isn’t even about themselves but their loved ones!

I love characters who takes their hatred and make it their source strength instead of letting it consume them. 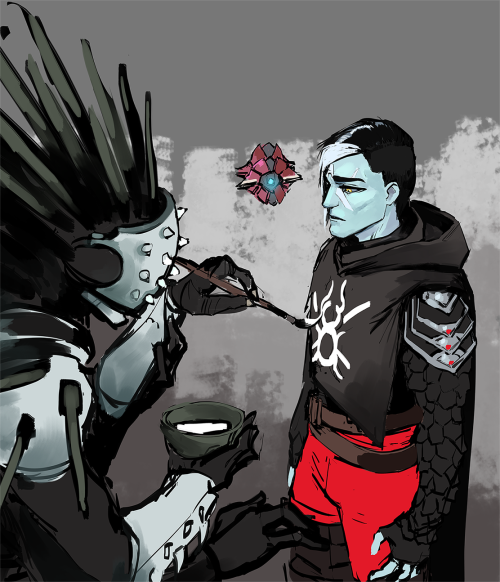 Here’s a song for you… Time Baby II by Medicine

Never get tired of Medicine

Really unhappy with the Spider right now, I hate what he’s done to Glint 😡

#destiny 2, #destiny 2 the crow, #destiny 2 season of the hunt, #the crow, #pump out those cookies my friends
31 notes · See All
hexelinaText

Hes so cute though…