Oh Sweet Jesus. No, we’re not ready for Voldemort. I don’t think this blog will ever be ready for that essay. So, no.

I will, however, answer part of your question here.

First, you’re making a very large assumption about a number of things. The main one though is the goal that Voldemort’s utmost concern regarding his followers was secrecy from the general public. It is of the highest priority that Death Eaters not be discovered.

If that is the priority then, yes, the dark mark being so visible and prominent is stupid.

That said, I don’t think it is. I think the Dark Mark has other purposes.

Let’s take a few steps back and remember where Voldemort and Wizarding Britain were circa 1981.

As Sheev Palpatine once announced to the Senate on Coruscant, in 1981, Voldemort is the Republic.

Nearly every major surviving pureblood family not only supports him, but the majority of the line are actively a part of his forces. The Wizengamot is filled to the brim with either Death Eaters, quiet supporters, or those who wouldn’t mind if the muggleborns went away but might like a bit less terrorism to go with it. We can assume the Ministry is also lousy with his spies. They all make loud noise pretending everything is terrible but… I suspect they didn’t really care to do anything about it.

It’s not so much that Voldemort has spies in the Ministry but that you can assume 3 out of every 4 employees is working for him. We don’t know much but, given what we see in book 7 (where Voldemort takes over the Ministry in about a day, with half starved forces, in a presumably bloodless coup), there is little to no resistance. You have aurors joining an underground resistance movement because the Ministry has utterly crumbled.

Death Eaters are the elephant in the room. It’s this secret every knows about but does not wish to acknowledge because the state still has trappings of being a state. Just as, in the seventh book, the ministry had trappings of being the ministry but really was run by Voldemort. Everyone knows who is a Death Eater and who isn’t, or they can certainly make an educated guess, but it doesn’t matter, because the government’s two seconds from realizing, “Wait a minute, we don’t actually exist!”

So, the dark mark was never meant to be secure in that sense. In fact, I imagine it’s the opposite.

It’s Voldemort’s way of ensuring there is no escape. You desert his ranks, he will find you and he will kill you. If you ever try to turn your back on him, pretend to be a normal member of society, he brands you for life. There is no escaping who you are and the choices you’ve made.

Had Voldemort not had the dark mark I guarantee that 90% of the Death Eaters we see in canon would never have returned. Lucius Malfoy would have gleefully disavowed and pretended he never heard of the man. Certainly, he would never work for him again if he had a choice not to.

Karkaroff in terror flees to Russia and even then in canon it’s presumed that, had Voldemort had a little more free time, he would have gone and snuffed him out.

So the Dark Mark is an effective means of ensuring a lack of desertion, of tracking people down, as well as communication (as we see Snape and the like receiving messages from it like a pager).

But yes, that’s my two cents.

“Yeah, you should’ve seen Snape’s face when Karkaroff turned up in Potions yesterday!” said Harry quickly. “Karkaroff wanted to talk to Snape, he says Snape’s been avoiding him. Karkaroff looked really worried. He showed Snape something on his arm, but I couldn’t see what it was.”

“He showed Snape something on his arm?” said Sirius, looking frankly bewildered. He ran his fingers distractedly through his filthy hair, then shrugged again. “Well, I’ve no idea what that’s about … but if Karkaroff ’s genuinely worried, and he’s going to Snape for answers …”

He couldn’t have known about Regulus’s Dark Mark, or have been on the cusp of being forced to take the Mark by his family, etc. In fact, it would seem that, until Snape shows his Dark Mark to Fudge in June 1995, the tattoo wasn’t common knowledge outside of the Death Eaters, even to Order members.

Draco malfoy potentially becoming a death eater to get back at Harry for getting his dad arrested and in trouble with voldemort?

I painted this T-shirt inspired by ‘ the dark mark ‘. It turned out better than I expected… 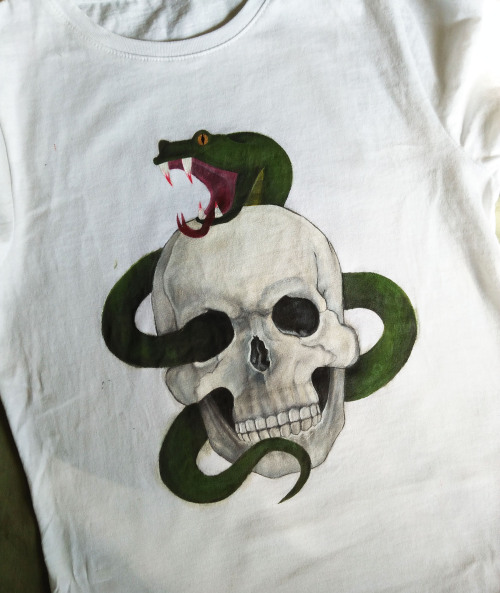 Which Dark Mark is cooler? The original, or Voldemort and Valor?

Nope. The Death Eaters appear to have done it on their own - it’s why Barty Jr did the Dark Mark in the sky - he was disgusted by them partying and reveling in the Death Eaterness when they had turned on/abandoned the Dark Lord. It’s implied - and the wiki certainly seems to go with it, anyway - that the appearance of the Dark Mark actually scared off the Death Eaters.

I appreciate the intent though - I only even raised the question because I had to open a copy to check a detail and then started reading it again. :rofl:

“After the Dark Lord died, the mark didn’t vanish. It only faded to a dull gray. Everytime time I looked at it I used to remember all the pain I had to undergo due this Mark. I could not remove it or draw over it, that’s why I decided to put flowers around it. Narcissus flowers, after my mother’s name. Cause she’s the only person in my life who loved me unconditionally. Now I only get a sense of peace when I look at it.”

I honestly feel like the Dark Mark has never made sense as something that is always visible because it’s such a clear identifier, so in my mind I think I’ve just soft retconned it to being invisible except when it’s been pressed? Which is definitely not canon, so yeah, this is a fair criticism.

(Can you tell I just didn’t want to deal with that particular aspect of the situation in that scene?)

Of course….the other thing to remember is that there is also a sizable chunk of Regulus’s arm that’s been ripped from him…………….

And something vast, green and glittering erupted from the patch of darkness Harry’s eyes had been struggling to penetrate: it flew up over the treetops and into the sky.

“What the -?” gasped Ron, as he sprang to his feet again, staring up at the thing that had appeared.

For a split second, Harry thought it was another leprechaun formation. Then he realised that it was a colossal skull, composed of what looked like emerald stars, with a serpent protruding from its mouth like a tongue. As they watched, it rose higher and higher, blazing in a haze of greenish smoke, etched against the black sky like a new constellation.

- Harry Potter and the Goblet of Fire

Something new for my Pottermon series!
The Dark Mark made up of a Cubone skull and an Ekans / Gastly fusion 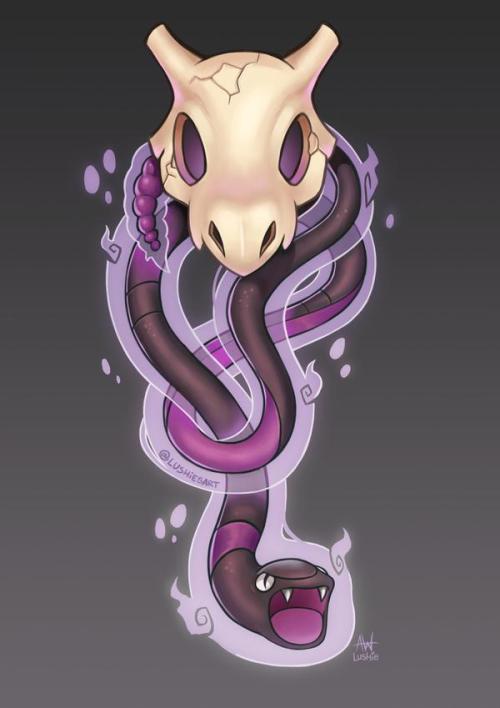 Hear me out: so you know when kids sometimes doodle on themselves after seeing their parents tattoos, or like their cool aunts or whatever. imagine scorpius doodling on his arm after seeing the dark mark on draco and by merlin draco isnt even mad he’s just upset and scorpius is so young he doesn’t understand and

#scorpius malfoy#draco malfoy#draco#hp#the dark mark#dark mark#:(#if you write this go and link me you fool i need the angst#or ask for a prompt cause ive got loads
12 notes
shyestguydoc
Text

DNI if you’re a Terf or Truescum